Elephone A5 with triple camera review: a disappointment

2 Kommentare March 8, 2019by Alex
Hey, guys! Just a heads up: The linked offer is already a bit older and the price of the gadget might have changed or it might not be available anymore.

Elephone, like UMIDIGI, has a few reputation issues, as some devices were simply ill-considered quick sh ots. They are credited with releasing the P9000, one of the first wireless rechargeable smartphones. The Elephone A5 isn’t quite as innovative, but with the built-in triple camera they also want to set a new trend. Will only fakes be used here or will the 5 five cameras (three in the back, two in the front) be used for good photos? 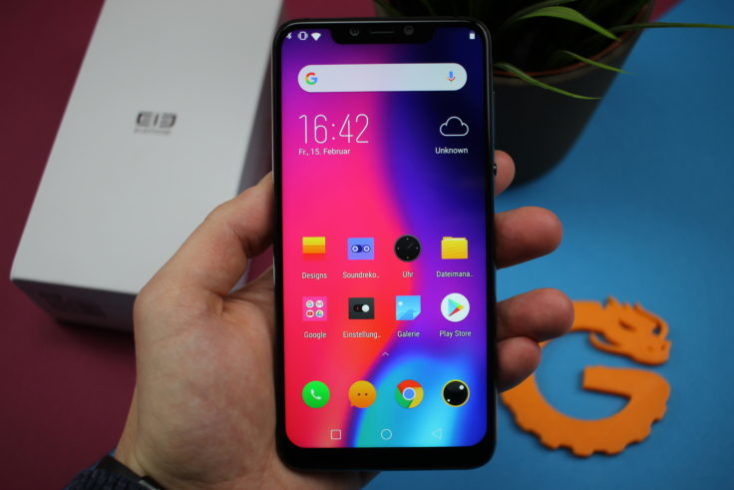 The Notch is also an important detail for Elephone. The front consists mainly of a 6.18 inch display, which comes in an 18.7:9 ratio. Below is a relatively large chin, but the left and right edges are quite narrow. With dimensions of 155 x 75.5 x 8.1 mm it is almost as big as the Xiaomi Pocophone F1, after all the display diagonal is identical. However, the Elephone is made of glass, both on the front and the back. A stainless steel frame holds the glass sandwich together. The look on the back, including the triple camera, is strongly reminiscent of the Huawei P20 Pro in the Twilight colour. The type of lettering on the back has also been adopted. 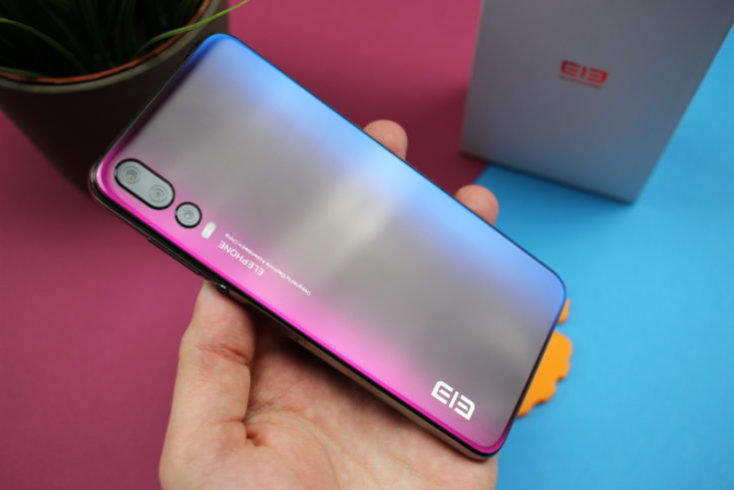 Even if the design is copied, of course it doesn’t look bad and I personally like it quite well. Unfortunately I can’t say that about the workmanship. One is the dual SIM slot, which has a darker shade than the shiny frame. Furthermore, the transitions between the plastic frame (sits between the actual frame and the glass) and the glass are unfortunately not smooth and you can feel a distinct edge. Otherwise, however, the A5 feels good and the barely protruding cameras are also nice to see. 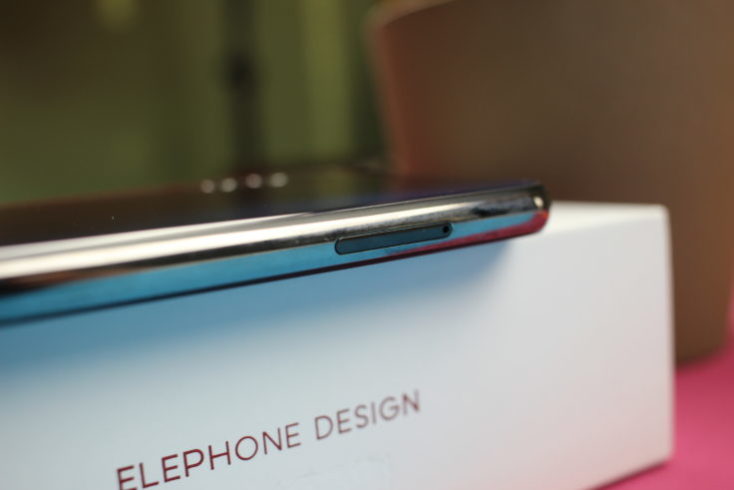 It is also interesting to note that the fingerprint sensor is neither on the front nor on the back. Elephone installs it on the right side of the case below the round power button and the volume rocker. We know this almost as well from the Nubia X. Once you get used to the position, the sensor works pretty fast, but in practice it only works in 8 out of 10 cases, which can be annoying. 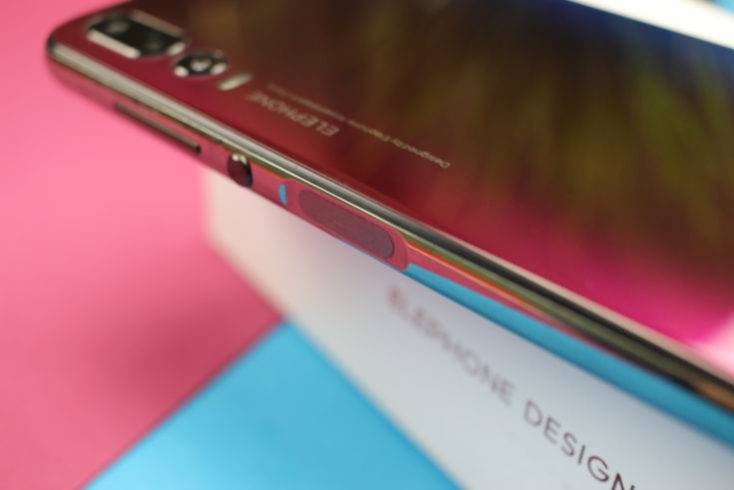 Elephone uses the well-known Full HD+ resolution, in figures we are dealing with 2246 x 1080 pixels. In combination with the display size of 6.18 inches, you get the standard pixel density of 403 PPI. An IPS LC display is used as the panel, which knows how to convince. Thanks to MiraVision, the display can be adapted to one’s own taste, but in my opinion this is not necessary. Colour reproduction and contrast are good and the brightness is also white. 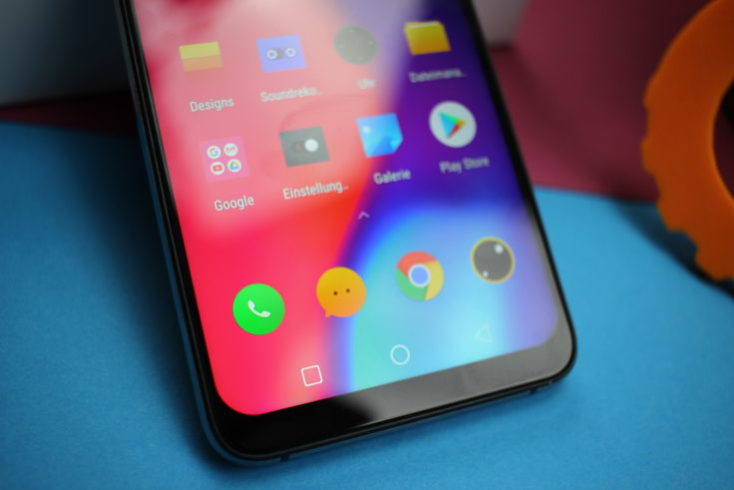 Elephone only uses a 5-point touch screen here, probably to save costs. But this is never really noticeable in everyday life and the touchscreen itself reacts nicely fast and reliable. The biggest criticism of the display is clearly the Notch. It is unnecessarily large, since the second camera is only a dummy, the display seems to be a bit darker directly at the notch (only noticeable with a white background) and the software is not well adapted. So the status bar is not used when displaying the quick settings (so zero space gain despite Notch) and clock or icons are partly cut off in the upper left corner – too bad! 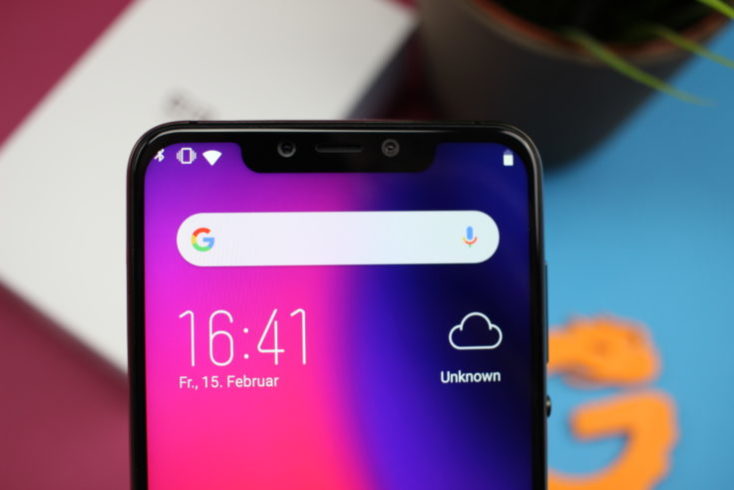 Elephone at least manages to get a lot of enthusiasm in terms of hardware. Finally, the Helio P60, MediaTeks relatively new processor of the upper middle class, is installed. The UMIDIGI Z2 Pro proved that the performance of the Octa-Core with a clock frequency of 2 GHz is right. In addition, there is 4 GB RAM and 64 GB internal memory, as befits its status. For a little more money, there should be a 6 GB and 128 GB variant, but this has not yet been released. It’s nice to see that you use LPDDR4X memory and you can expand the internal memory by up to 512 GB with a microSD card.

As expected, the Helio P60 performs well again in the benchmarks, but doesn’t quite reach the Snapdragon 660 in Redmi Note 7 yet. In everyday use, however, one notices that the system is not well optimized, as it is known for example from MIUI. It often comes to small jolts and everything (open, close, change / navigate in the system) takes a little longer than expected in this price class. Once you are in the desired app, everything runs smoothly. Asphalt 9 doesn’t pose a problem for games even at the highest setting, but I had to switch to medium graphics quality for PUBG to have a smooth gaming experience.

However, when playing such complex games, the A5 quickly gets quite warm and consumes a lot of battery power. Here, too, there is a lack of optimization.

Elephone uses its own customized interface called ELE UI again for the A5. This is based on Android 8.1 Oreo, an update to Android 9 Pie is announced on the product page. But it has to be said that the last update came in December according to the build number. Also the security patch is not fresh anymore with a status of October 2018. After all, the Play Store and all other Google services are directly available and the system is multilingual except for a few settings.

These English settings then refer to the adjustments made by Elephone such as the three-finger screenshot, the possibility to press the photo trigger via the fingerprint sensor or to choose between on-screen keys and gesture control. In addition, you can choose between five different themes in the design app, all of which are quite colourful. 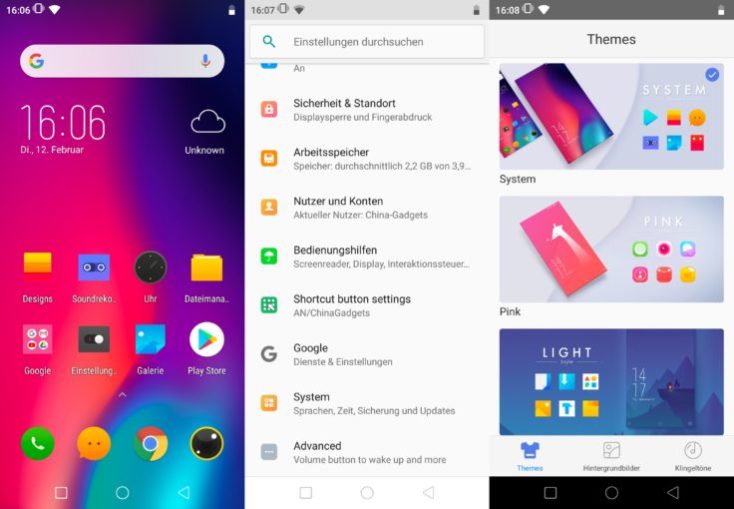 Unfortunately as already mentioned the system is not well optimized and still has some bugs and is sometimes very slow. For example, it takes two seconds until I am finally allowed to close all apps in the multitasking overview, and the notification center also often suffers from strong jerking. This is not due to the processor, but simply to bad software, which would have to be improved by updates. The system is usable in any case, because of the errors only sometimes a little more annoying than anticipated.

The Huawei P20 Pro has started the trend, the Elephone A5 is one of the first China smartphones to jump on the train. We’re talking about the triple camera. The A5 combines a 12 megapixel, 5 megapixel and a 0.3 megapixel sensor. I didn’t expect a big added value anyway, but it seems that the quite senseless 0.3 MP sensor has been completely omitted, even if there is a lens. Also the second 5 MP sensor is unfortunately not a telephoto or wide-angle lens, but is only used for portraits. 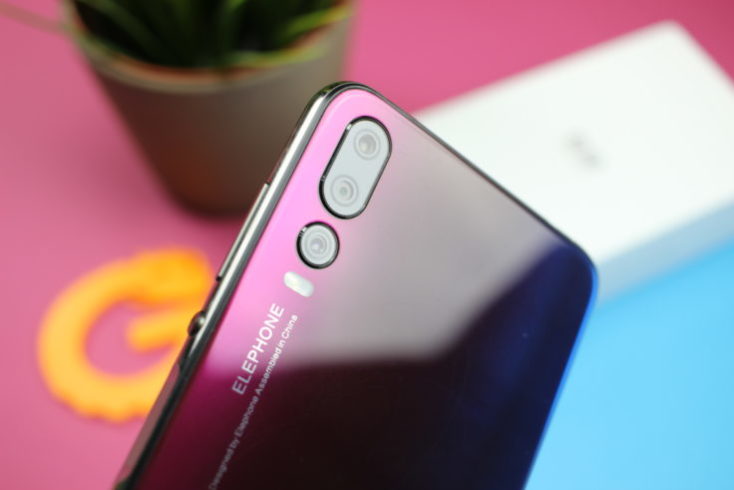 The trend of fake cameras unfortunately also continues with the wide front camera. Here, according to the manufacturer, a dual camera consisting of a 20 megapixel and a 2 megapixel sensor is installed, whereby the 2 MP sensor is again only a dummy or is not used. Elephone doesn’t specify exactly which sensors are used, which makes you fear cheap goods. 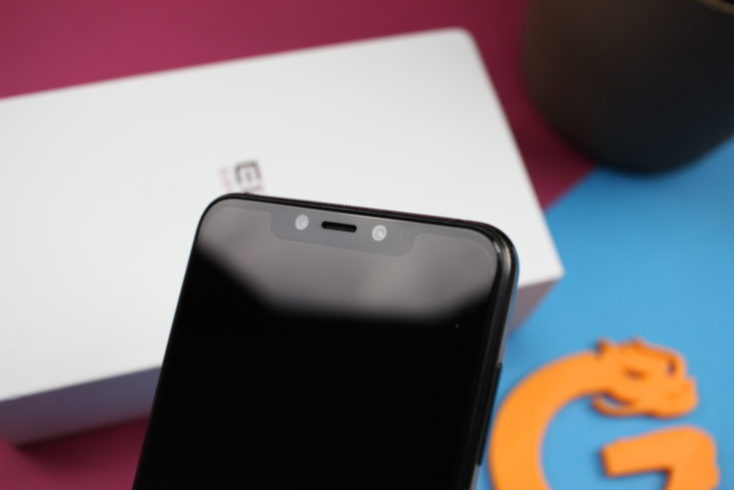 Unfortunately, the 12 MP main camera has an aperture of only f/2.8, which is also a reason for the poor low-light performance of the camera. But let’s get to the positive side first. Sharpness and details are right in good light, but that’s all. The dynamic range leaves a lot to be desired and the HDR mode unfortunately doesn’t change anything at all (see first picture). Furthermore, there is a distinct yellow tint, which is even more noticeable compared to other mobile phones (second photo).

In scenes that are not optimally illuminated by sunlight, the camera can unfortunately be neglected completely. Even with the light switched on in the room and some sunlight from outside, there is clear image noise and the quality drops with even less light into the unusable. 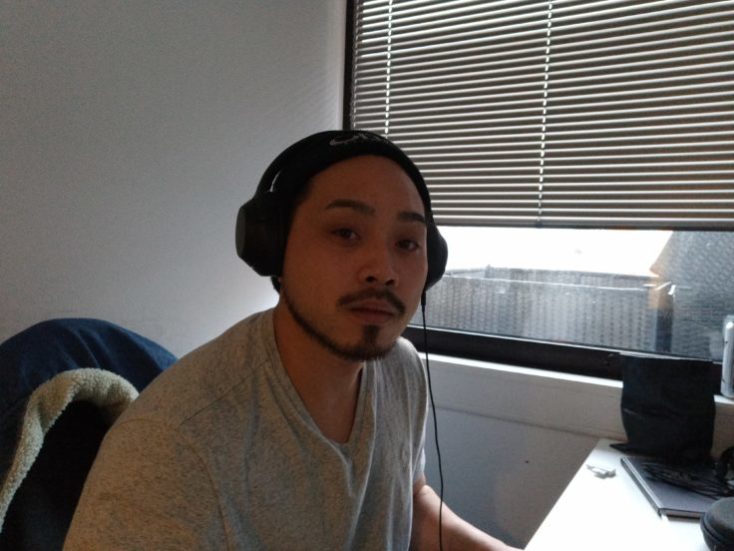 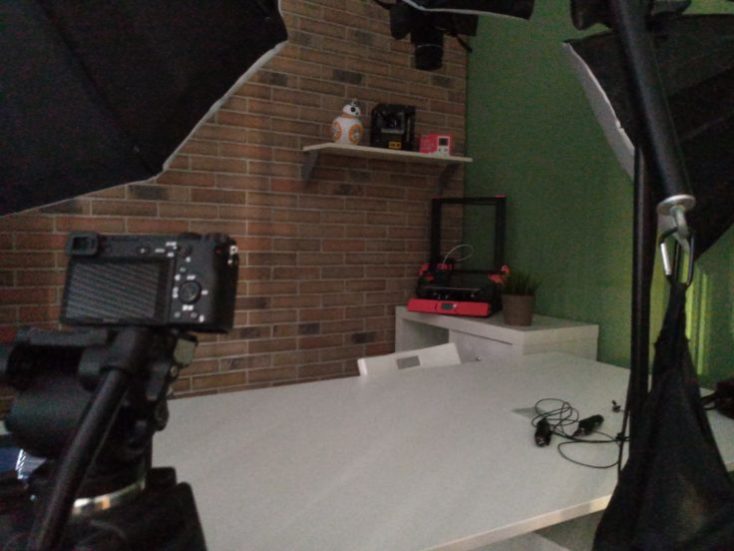 Since the secondary 5 MP sensor works, portrait shots with bokeh effect are possible. However, the lack of experience of Elephone in this area becomes apparent. A Redmi Note 6 Pro simply creates much better portraits with good edge detection. The A5 makes an effort, but unfortunately is often wrong in the transition areas between foreground and background. 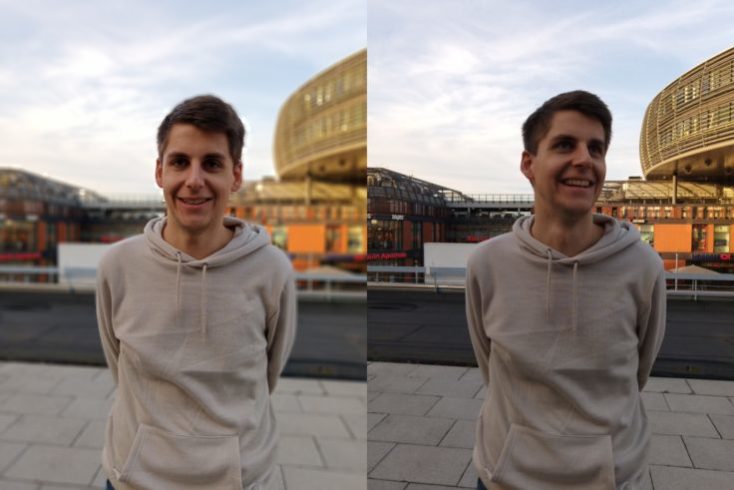 The Selfies are lacking in everything

The 20 MP front camera disappoints all along the line. The sharpness isn’t on the level you’d expect from 20 MP, the dynamic range is poor and there’s also a lack of detail. There is no portrait mode due to the second fake camera. After all, Face Unlock works quite well and fast via the front camera, but of course it’s not as secure as the fingerprint sensor. 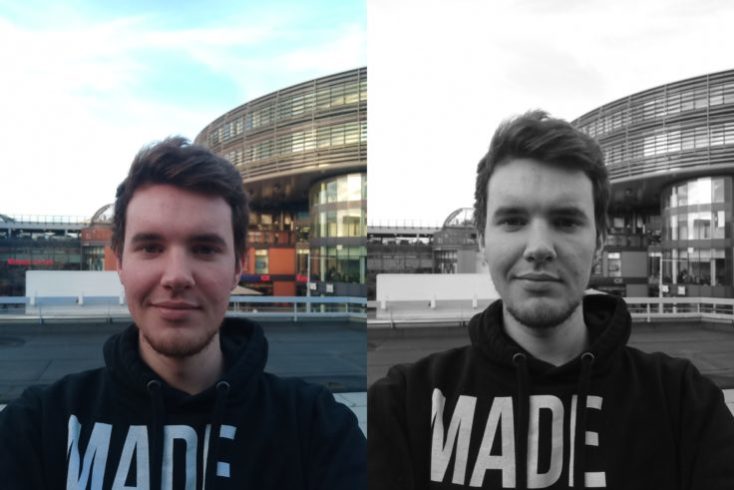 The battery is quite large with a capacity of 4,000 mAh and accordingly I expected a good battery life. Unfortunately, the lack of optimization strikes once again and “gives” the Elephone A5 a battery life of only 5 hours and 4 minutes at half brightness. If you further reduce the brightness to 25%, there are 6 hours and 14 minutes in it, which is still a bad value for a 4,000 mAh battery. Of course, you get over a day with it, but normally you would have spent two days with 4,000 mAh. For comparison: A Redmi Note 7 comes with the same battery size and larger display on over 12 hours. 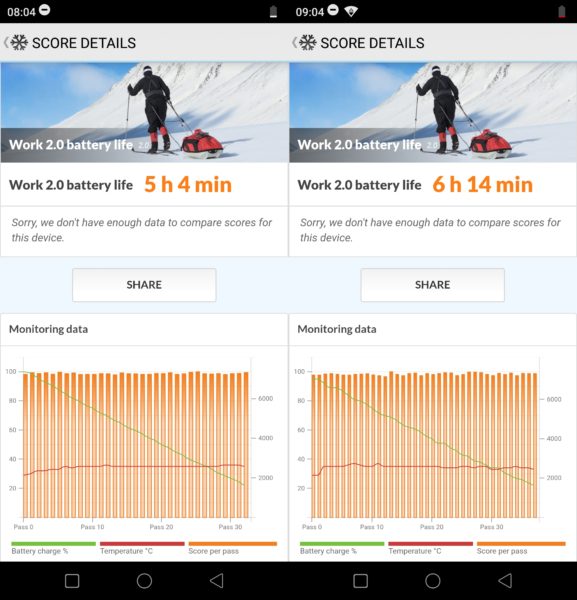 According to Elephone, the A5 supports fast charging with 9V/1.8A, but only a 5V/2A charger is included. A full charge takes 2 hours and 20 minutes. If you had a compatible Pump Express charger, you’d be half an hour faster.

Unlike many other China smartphone manufacturers, Elephone knows about its European fans. Finally LTE Band 20 is available, but also B1/B3/B5/B7/ and Band 8. In addition there is Bluetooth 4.2, a hybrid SIM slot consisting of 1 Nano-SIM plus 1 Nano-SIM/microSD slot, GPS as well as GLONASS, a 3.5 mm jack connector and a USB type C slot. Only NFC is missing, so paying via Google Pay is not possible. 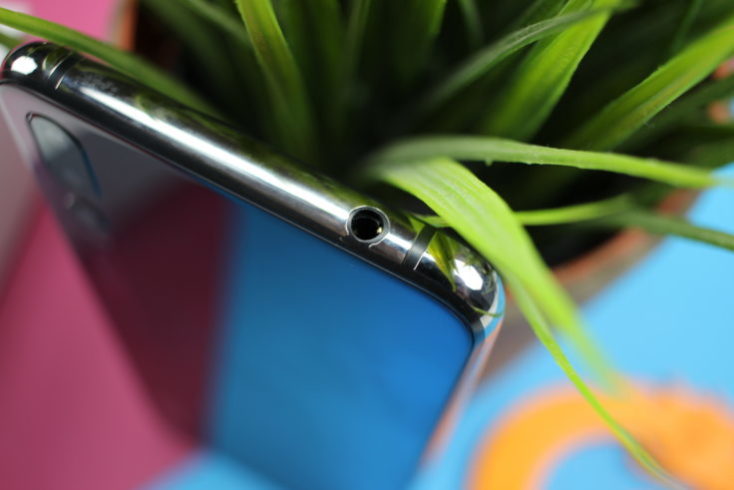 After a lot of negativity, the A5 can positively surprise you here. Mobile radio and GPS reception are convincing and even Dual Band WLAN (2.4/5 GHz) makes full use of the n standard. On the audio side, the A5 scores with good call quality and a headphone connection that is available at all. The mono speaker is fine for the price range, but is definitely not one of the best. 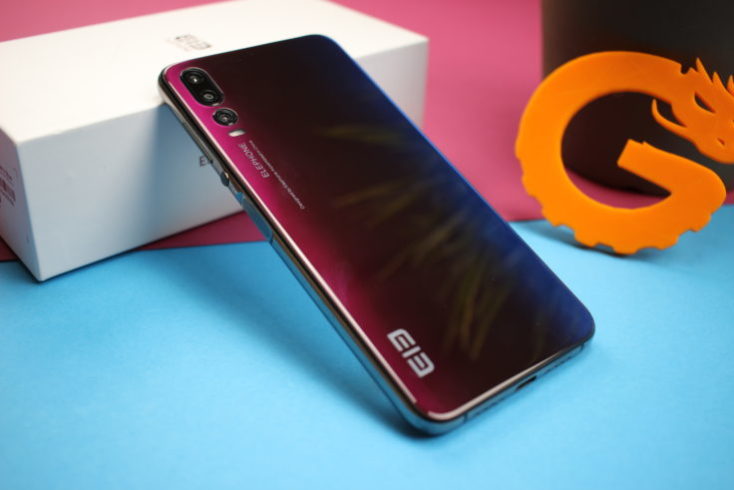 Homework for the A6: Software optimization!

The Elephone A5 in China was a great choice from a purely optical point of view and I also like the (copied) design. Even if the workmanship isn’t completely convincing, it doesn’t feel “cheap” and the display is convincing overall. The Helio P60 also shows its potential, but is slowed down by bad software. This lack of optimization is also expensive for the battery life. Unfortunately, the cameras aren’t good when they’re not fakes either. Here one seems to have simply used cheap hardware. 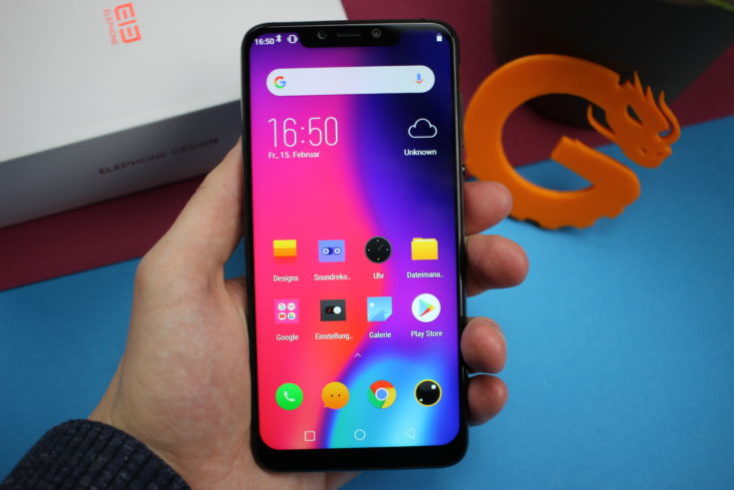 As promising as the A5 was and as good as it is in part, the negative unfortunately outweighs the negative in the end. So if you’re looking for a good smartphone with similar features in this price range, you should have a look at the Xiaomi Redmi Note 5 or Note 6 Pro.

What do you think Elephone will do to improve the software?