Best price: Creality Ender-3 3D printer for $176 from US warehouse

0 Kommentare October 17, 2020by Thorben
Hey, guys! Just a heads up: The linked offer is already a bit older and the price of the gadget might have changed or it might not be available anymore.

The Creality Ender-3 continues to be one of the most popular 3D printers, especially for newcomers, and is currently available for $176 from TomTop from the U.S. warehouse. The original glass printing bed is available from TomTop’s China warehouse for $19.99. 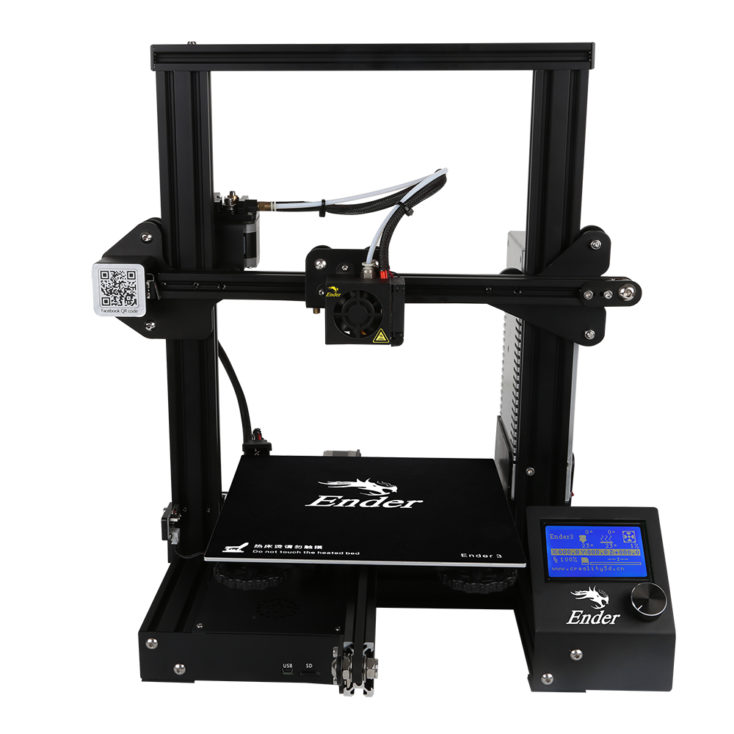 At first sight you might notice: The size of the pressure chamber is located in the middle between the Ender-3 and the CR-10. However, the design differs completely from the Ender-2 and is based on the CR-10 (or “original” Prusa i3).

In addition, there is no external power supply anymore. This is attached to the back of the Z-axis. The H-shaped base construction is somewhat more unusual. Usually rectangular screwed aluminium profiles (20 x 20 mm or 20 x 40 mm) form the base plate. The Ender-3 uses a remarkable 40 x 40 mm aluminium profile for this purpose.

This time it was not ordered and shipped by GearBest, but by Banggood. After 14 days (still just on average) the package arrived – undamaged.

As so often, heating beds, stepper and other individual components are securely packed or separated by polystyrene. This is also the case with the Ender-3, although it has to be said: Some 3D printers were better “secured”. However, since the Ender-3 does not use large acrylic parts, the postman can still handle the parcel a little rougher.

When unpacking, it becomes clear relatively quickly: 25 minutes of assembly time, as with the predecessor Ender-2, will not be possible here. There are considerably more parts in the carton. It’s not a DIY kit where you have to screw everything together in 5 hours, but it’s definitely not a DIY kit: I-screw-the-bottom part-with-the-assembly-in-four-minutes-together kit.

What is immediately noticeable: The floor construction is (almost) ready assembled, but tilts on a flat surface. At first I thought the floor was uneven, but the 3D printer also tilts on the table. Yay. More about that later…

The accessories are 10 meters of white filament (better than nothing, but not enough), a spatula, filament pliers, a noname microSD card (8 GB) and many cable ties (cool!). So you should order (if not already available) 0.5kg – 1kg filament directly. Otherwise 10m are only just enough for “Benchy” and the “Calibration Cube”. The usual Allen wrenches and open-end wrenches are included as tools.

The wrenches are of course only sufficient for the single assembly and to tighten 20-100 screws. If you have a toolbox, you will use your existing tools. I think it’s nice that they thought about the components that could get clogged. This should never happen with proper use (let it cool down properly), but: having is better than needing ;-). A second nozzle and the PFTE hose adapter as well as a needle for cleaning are included.

The construction is relatively simple. The instructions with XY steps are well illustrated, easy to follow, only sometimes the screws needed in this step are missing. This can be annoying (there are certainly 10 different types of screws involved), but by using the exclusion procedure and a different assembly sequence, you can then find the appropriate screws. Unfortunately, for example, the screw heads shown differ from the screws actually enclosed. Too bad and somehow unnecessary to lose points like this.

Altogether I needed 45 minutes for the assembly – but I could have finished it in 30 minutes. Nevertheless: No video is needed, although one is also on the enclosed microSD. Was I finished after 45 minutes and could start printing? No.

As mentioned in detail the H-shaped substructure tilts. No matter how you put the H, under one corner there was 4-5mm(!) air. So I put the 3D-printer on a flat surface (I like to recommend glass panes), loosened all screws and starting with the H and ending with the assembly all screws were tightened again. Wow, how could you assemble the Ender-3 so crooked? Then one could have missed out on the “partial assembly” in the factory …

At least: After screwing the X-axis together again, it ran smoothly on the Z-axis. And: Either way I recommend with every China 3D printer before the start: Check the angles; everything runs easily and are the screws tight?

Otherwise, there are no scratches on the aluminum profiles (there have been times on other new 3D printers) – the processing quality looks very solid. The 8.5 kilograms do not come by accident. I also like the cable fixation on the Hotbed. Due to the constant movement/loading of the heating bed plug, in the past there were more frequently singed plugs.

Let’s get briefly to the hard facts: The print head (MK10) and the feeder/extruder have been taken over from the CR-10. Too bad, here I would have wished for an E3D Titan Clone like at TEVO.

Proven feeder/stepper construction at Creality. A titanium clone would have been (even) better.
The display (12864 LCD) and also the operation has been taken over. The reason: The low-cost mainboard from Creality was used again, which is not really reasonably expandable. But here I would like to remind you of the low price of ~$170.

Tip: A glass pane is not only great as a printing surface, but also offers the complete 3D printer a smooth, flat surface. In the ideal case you can use a spirit level (a smartphone does it also in an emergency) for a vertical installation. So you can print better and isolate errors in the device. You will be surprised how crooked usual tables are.

Before I start printing, of course I’ll start with leveling. With the Ender-3 there is neither a BLTouch (distance meter for automatic leveling [e.g. with the Tevo Little Monster]), nor the software-side, semi-automatic leveling (as e.g. with the TEVO Michelangelo). That’s not too bad, but actually I was looking forward to “spectacular improvements/changes” on the new Creality 3D printer.

At least: The screw heads for leveling are fitted into big plastic wheels – one of the most popular mods on Thingiverse (here for the Anet A6/A8 or Creality CR-10). This makes leveling less “fiddly” – so Creality already looks a bit at the community.

Sidenote: These big leveling wheels are also made of plastic, but with the injection moulding process. This should have been done definitely with the lower plastic cover of the power supply. The cover is 3D-printed and in a really moderate quality.

Despite my experience and the small size of the heating bed, leveling was not so easy. Due to the not quite optimal packaging (?) the hotbed was slightly deformed, which I compensated by washers and small cork remains. Unfortunately the Buildtak is a bit crushed in the rear quadrant. The original glass pressure bed from Creality is recommended as a replacement.

My first 3D print on the Creality Ender-3 was the included GCODE (“test-dog.gcode”). This is mostly my approach, because in the ideal case the manufacturer sliced the print object of choice perfectly and adapted it to “his” 3D printer, which saves me from having to approach the perfect configuration for the time being. Just finding out the perfect printing temperature for the 3D printer/filament can otherwise take a bit longer. Hopefully Creality will want to show how good the 3D printer is?

What I didn’t know: 3D printing took 5:27 hours. The enclosed 10m filament was of course much too little for that! In addition, the heating bed was set to 0 degrees and the Brim, for the grip, was chosen accordingly “sporty”. Thus the “test-dog.gcode” can only be used conditionally as a “test print”.

Still: The print quality is really very good. Not perfect, but there are no protruding “noses”, the surface is so smooth that light is reflected. The individual layers are hardly visible. The very good print quality becomes particularly clear with the printed support.

Afterwards I adjusted the Travelspeed and the Retraction a little bit, because some small threads were pulled. Then I printed the Calibration Cube and Benchy – also with very good results. The slicer configuration of the Creality CR-10 (included in the printer selection of newer Cura versions) was used as base.

With very large prints the damaged heating bed makes a (small) stroke through the bill. The adhesion is not optimal everywhere (no matter how well you level it), I helped myself with a brim layer. In case of doubt you should bring the nozzle a little bit denser than usual for the first layer.

Whether I, as one of the first orderers, had now simply bad luck with the packing, or which is a more frequently occurring problem – that will show the future. However, it remains a pity: One more Styrofoam layer and this problem would have been avoided.

The Creality Ender 3 “fails” a little bit because of my expectations. Somehow I expected smart improvements and cool new features, which the Ender-3 doesn’t really deliver. There was no big (positive) surprise like the Ender-2. But that’s not necessarily bad! The Creality Ender-3 is a good printer, very stable, although the first impression wasn’t really good. Creality wants to score with the bargain price.

As always in my 3D printer Fazits: Who isn’t the Creality Ender-3 suitable for?

You want to get to know 3D printing from the ground up? Every interaction of the individual components? Then a DIY kit, such as the Anet A6, might be better suited. Then you should also take care of security, keyword: MOSFETs.
A pressure chamber of 220 x 220 x 250 is not enough for you? You want to print model aircraft wings or R2D2 in 1:1? Then the Creality CR-10 or even the TEVO Little Monster is something for you.
You rather want to print little things? Then the previous version, the Creality Ender-2, is even cheaper and my recommendation.
With each further 3D printer test, the differentiation becomes more and more difficult. Everyone rates other features differently. But if you don’t want to spend $250-300 for the Anycubic I3 MEGA (similarly large print space, but e.g. 2 Z-axes, filament sensor etc.) you don’t do anything wrong with the Creality Ender-3. The price is the selling point.

The Creality Ender-3 is a good gap filler, between Ender-2 and CR-10, that doesn’t need any great innovations. As expected, some components come from the low budget range. “Nice extras” are difficult to realize for $170.

In addition (at least our specimen) was not well packed, so that the heating bed will always be a bit damaged. What a pity! Nevertheless: The print results are already good to very good, even ex works. The Creality Ender-3 will certainly be very well received.