2 Kommentare June 2, 2020by Tim
Hey, guys! Just a heads up: The linked offer is already a bit older and the price of the gadget might have changed or it might not be available anymore.

After the vacuum robot manufacturer Roborock launched its first cordless vacuum cleaner, Anker eufy was not long in coming. Following the simultaneous launch of a handheld vacuum cleaner, the Chinese tech giant now wants to have a say in battery vacuum cleaners. The HomeVac S11, which comes in two versions and three colors, is the first. Our review. 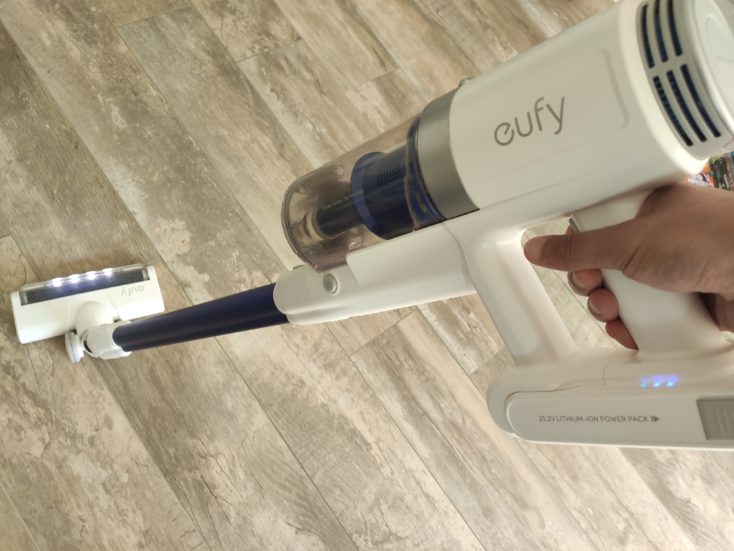 The S11 comes on the market in two different versions, the differences are listed above this sentence.

Anker’s SmartHome subsidiary eufy is a welcome manufacturer here. The products are of high quality workmanship and deliver what you expect from them. To this day I am still enthusiastic about the Smart Scale P1 and flirt with the SmartHome sensors. Even though their first LDS vacuum robot could not convince me in the test, the expectations for new eufy products are high. And this already applies to the packaging.

After opening the package, I noticed a slight plastic smell, but it disappeared after two days.

The packaging is impressive, and the scope of delivery is also extremely generous and included:

The additional battery, which can also be charged directly and individually on the wall mount, which functions as a charging station, should be specially emphasized. Thus, one can always have a second, charged battery in the back, in case the 40 minutes battery life is not enough. Due to the exchangeability of the battery, the lifetime of the vacuuming is of course also longer.

Because the question often comes from you: The vacuum cleaner does not stand by itself.

The use as a 2-in-1 hand vacuum cleaner is nothing special, and we already know how to put the individual parts together using the click lock (simple and fast) from other models. But what we like about the HomeVac S11 Infinity beyond that is the interchangeability of the individual parts and the associated flexibility.

Not only the battery is exchangeable, but also the dust chamber is completely removable. The same applies to the main filter at the rear end of the handle. Practical, as the individual elements are much easier to clean or – in the case of the dust chamber – to empty. Time for a short series of pictures:

Also the respective floor roller used can be removed with a few finger movements, then cleaned or replaced. As hairs get caught in the rollers from time to time, you have to remove them from time to time and cut through the (animal) hairs with a small knife.

If you want to complain: there are already cordless vacuum cleaners with a built-in small knife that cut the hairs already during cleaning.

Visually, I like the HomeVac S11 Infinity very much, especially because the plastic used does not spoil the visual impression. A model is only chic if the workmanship is right. If the Roidmi NEX is a 10 in terms of workmanship, the S11 Infinity is an 8-9, except that you have a guideline. 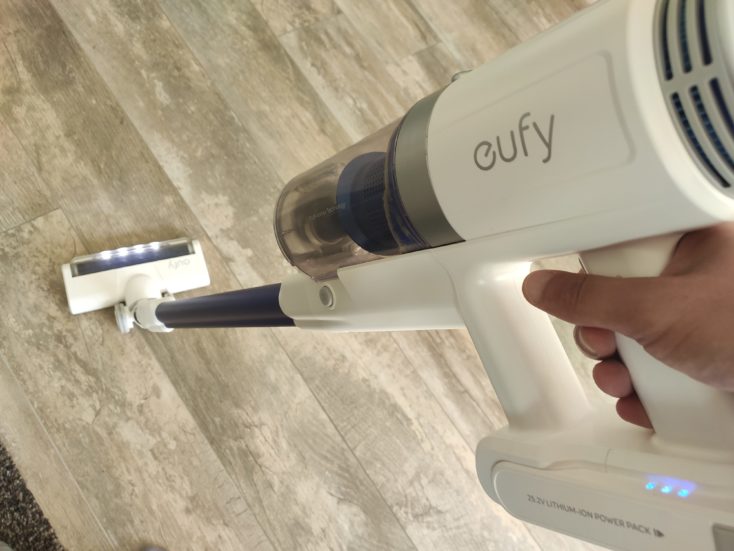 As it should be for an international and via Amazon selling manufacturer, the obligatory CE mark is also included.

Personally, I am very pleased with the LED lights installed on the floor nozzle, which enable the user to identify dust and other dirt even in darker corners. But opinions differ, I personally would like to see the LEDs on every new cordless vacuum cleaner model.

The LED lights of the S11 Infinity are switched on continuously in suction mode. We know it from the Roidmi models that it is also possible to detect on the floor nozzle when it gets dark around it. So the Roidmi Vacuums only switch on the lights when they might be needed. This is a cool technical trick, but the LED lights do not draw so much battery power that continuous lighting would affect the working time. 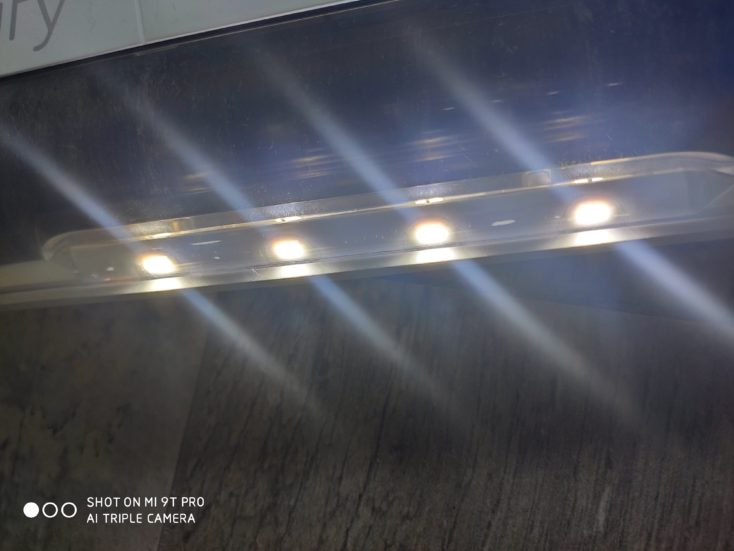 A dual vortex cyclone system including a high performance filter is working inside the vacuuming unit. This in combination with the 20,000 pa suction power at the highest suction level is not as noticeable as the handling compared to other top models. I really like the handling because of the 180° rotatable bottom nozzle. This way you can get very well into angled corners, but due to the shape of course not all of them fit exactly.

Due to the low weight (3.0 kg completely removed, 1.5 kg the main element) you can dash through the four walls quite well and don’t have too much of a feeling of doing straight housework. This is also due to the small tyres, which make it much easier to guide the vacuum cleaner.

But two things bother me: On the one hand, the trigger has to be pressed continuously to keep the suction process active. On the other hand, the control element with which you can switch back and forth between the three suction stages is located on the top of the main element. Thus, in order to increase or decrease the suction power during one’s round, one has to add the second hand. By the way, the vacuuming is suitable for both right- and left-handed people.

On the Dreame-models, a single press of the shutter button is enough to activate the suction process. A switch is used to change the vacuuming level where the display is located on many vacuumers. Also not the optimal solution, but I like it better than putting the control element on top of the main element.

Speaking of Dreame: Three LEDs also indicate the S11 Infinity’s battery life (even when charging the battery). The more LEDs light up, the fuller the battery.

As already mentioned, two batteries are included in the scope of delivery, whereby one can vacuum for 80 minutes with two charged batteries, ergo 40 minutes per battery. Afterwards, the battery has to be put back on the wall mount for 3.5 h – or you plug the charging cable directly into the battery.

Operating volume and performance on carpets

In spite of the high suction power, the operating volume is kept within limits. The sound level meter shows a value of 68 dB at the highest suction stage, 65 dB at the middle stage and 60 dB at the lowest stage. 68 dB is not necessarily quiet, but you are already used to this from other vacuum cleaners. But here you can continue to work on it, the quieter the better.

The soft roller is rather unsuitable for carpet, the combination roller made of plastic with v-shaped brush elements is more so. Here, one should not expect too much, but it does get some fluff and dirt out of carpets due to the suction power.

But if you had used the Dyson V11 Absolute on carpets for comparison, other vacuums seem a bit lax. The Dyson’s Torque Drive Brush literally vacuums itself to the carpet so that a lot of dirt is revealed. But it’s only a matter of time until the Chinese will get a mature copy of the Torque Drive. Unfortunately not yet with the S11 Infinity.

Different attachments for many areas

Of course we also have – as usual with other models – various attachments with us. So the H6 can also be used as a hand-held vacuum cleaner, for example for the car or if you want to vacuum away something quickly.

We also have the motorised mite attachment, which has come into fashion with cordless vacuum cleaner manufacturers, with which you can free textiles from house dust mites. It is primarily intended for allergy sufferers, but unfortunately without UV light, which would allow the mites to be killed even more efficiently.

The brush attachment will probably be used most often in combination with the hand vacuum cleaner. With it you can walk over surfaces, through the car or vacuuming away the breakfast that has fallen over. The narrow attachment is especially suitable for joints and grooves, but also for vacuuming up cobwebs from the ceiling.

Also included: the often requested flexible hose, which allows its owner to get into corners or vacuum for longer distances. Personally I never use it, but it is always practical.

The trend for 2020 already seems to be clear at the beginning of January: vacuum robot manufacturers are now including cordless vacuum cleaners in their product range. After Roborock now also eufy, we have already picked up rumours of other manufacturers, which we will inform you about in time. A logical step and from our point of view desirable, after all, competition stimulates business – even if it makes it more confusing.

The eufy HomeVac S11 Infinity can cope with everything that comes up in everyday household life, even on carpet it doesn’t look bad. The generous scope of delivery, the solid workmanship and the simple cleaning of the individual parts are particularly pleasing. The handling also appeals to me very much. The working time of only 40 minutes is not so great, but this can be compensated by the second battery.

But to put the vacuum cleaner in the right place: It’s worth the money, but you can also spend more and get even more (display, dust sensor, wipe function). In the price range up to $300, it competes directly with Xiaomi partners Dreame and Roidmi, who are slightly ahead with their respective top models.

What do you think of the first eufy battery vacuum cleaner?