0 Kommentare October 24, 2021by Jens
Hey, guys! Just a heads up: The linked offer is already a bit older and the price of the gadget might have changed or it might not be available anymore.

In the Xiaomi UST (Ultra Short Throw) beamers were rare and not that affordable at the moment. Meanwhile, there are more and more of these projectors, including the new Fengmi R1 from Formovie, which even offers up to 200″ projection area. 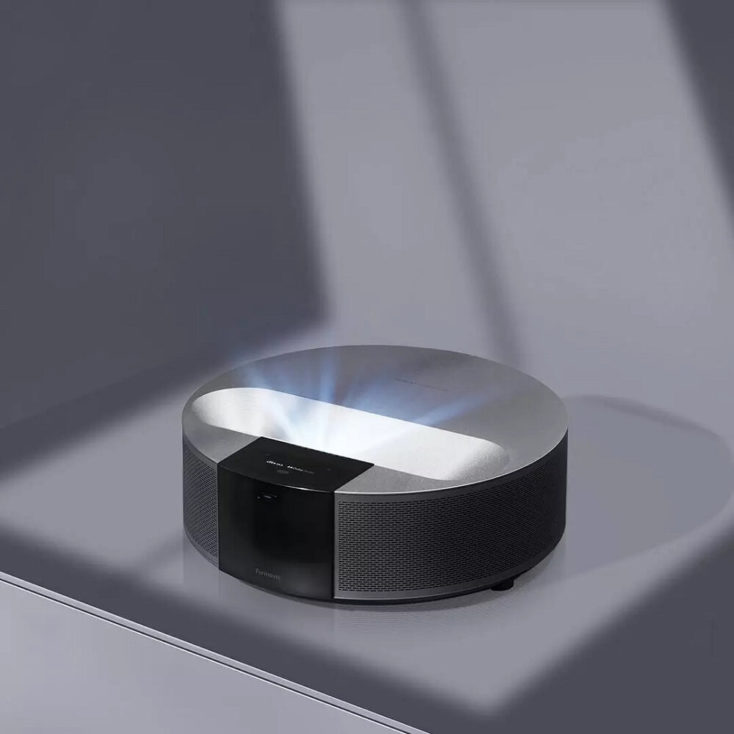 Unlike the now several versions of the Xiaomi Mi Laser short distance beamer and the models from WEMAX, the Fengmi R1 is round and not cuboid. Thus, it is rather reminiscent of the stand of the Xiaomi 55″ Transparent TV. On the top, however, is of course the laser and not a screen. The dark gray Fengmi R1 is only visually interrupted by a black element on the front. The diameter is 30.4 cm and the projector is said to be just under 10 cm high, while the weight is 3.9 kg. Thus, it is also relatively easy to transport in the household. 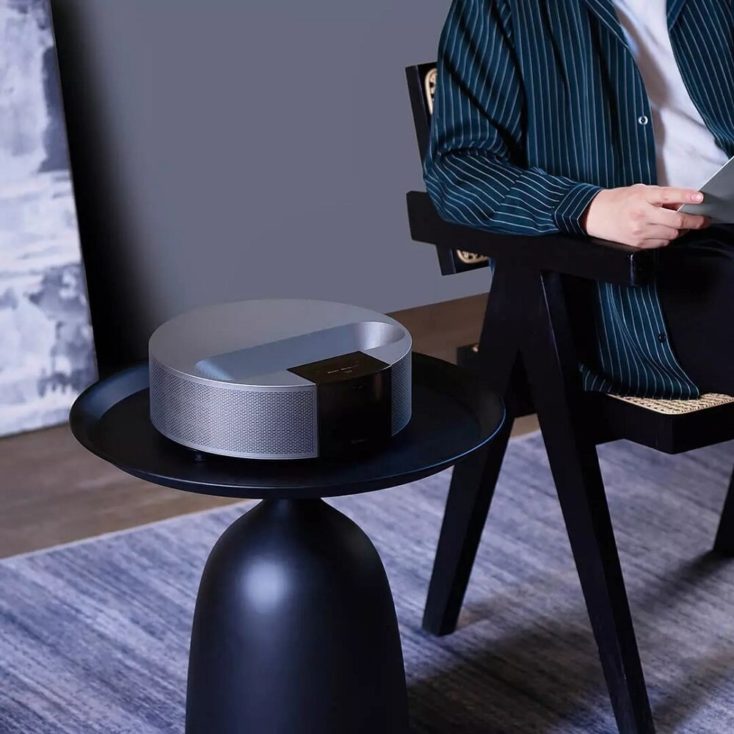 On the back, there is a USB 2.0 port, an S/PDIF port, a LAN port, and two HDMI ports in addition to the DC power port. One of them is even an HDMI ARC port, which is nice. Since this is a smart device, a MediaTek MT9669 quad-core processor sits inside, as well as 3 GB of RAM and 16 GB of EMMC mass storage. The operating system based on Android, not Android TV, is FengOS, the manufacturer’s own interface. If this is translated semi-optimally, the projector can also be used in combination with Miracast, DLNA or iOS to project content thanks to WiFi integration. 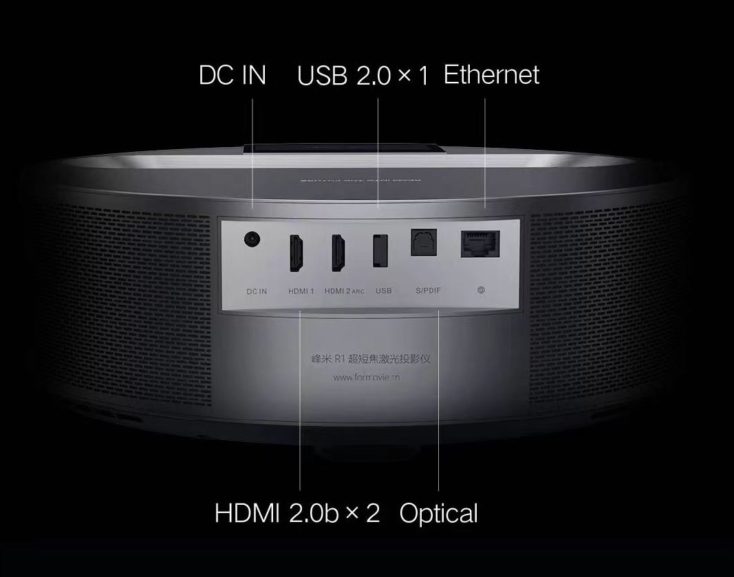 As you can guess from the name Fengmi, the projector is also quickly counted as part of the Xiaomi ecosystem. However, that’s only because you can also integrate the Fengmi R1 into the smart home via the Xiaomi Home app.

Since it is an ultra-short distance projector, you do not have to set the R1 at a far distance in the living room, but it virtually fits on the sideboard on the projection wall and then projects diagonally upwards. For this, the manufacturer integrates an ALPD light source that offers a brightness of 1,600 ANSI lumens. That should easily be enough for a high-contrast image even in moderately dark rooms. 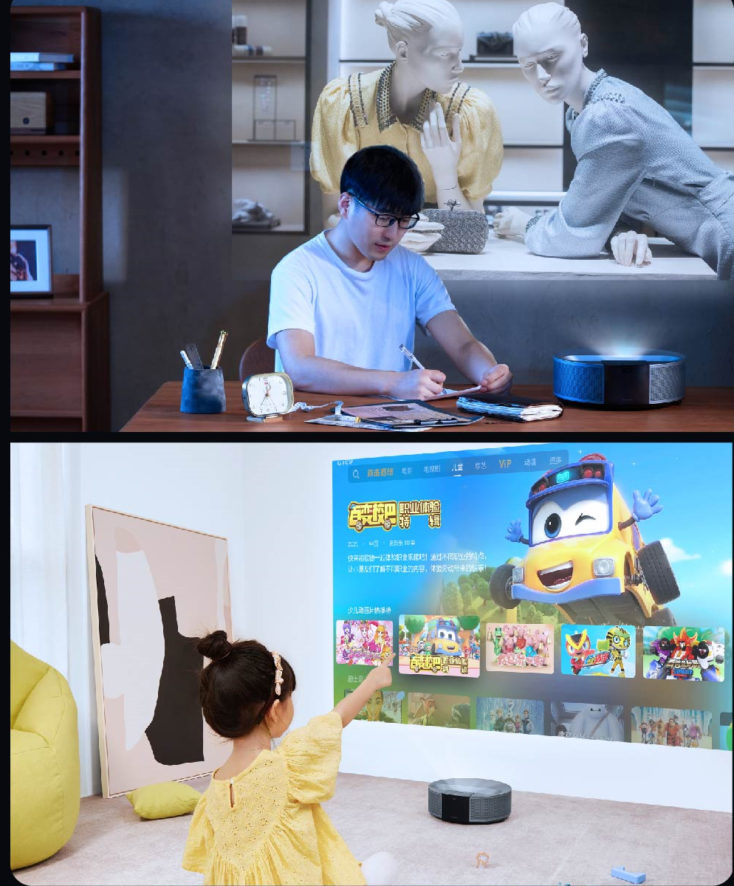 The contrast ratio is 3,000:1 and the resolution is FullHD of 1080p. Nevertheless, the projector can play 4K content. In contrast to the Xiaomi beamers, the maximum diagonal is even 200″ instead of 150″ and has to be at least 50″. At the same time, the projector does not have to be positioned quite centrally, since the R1 has an 8-point keystone correction. 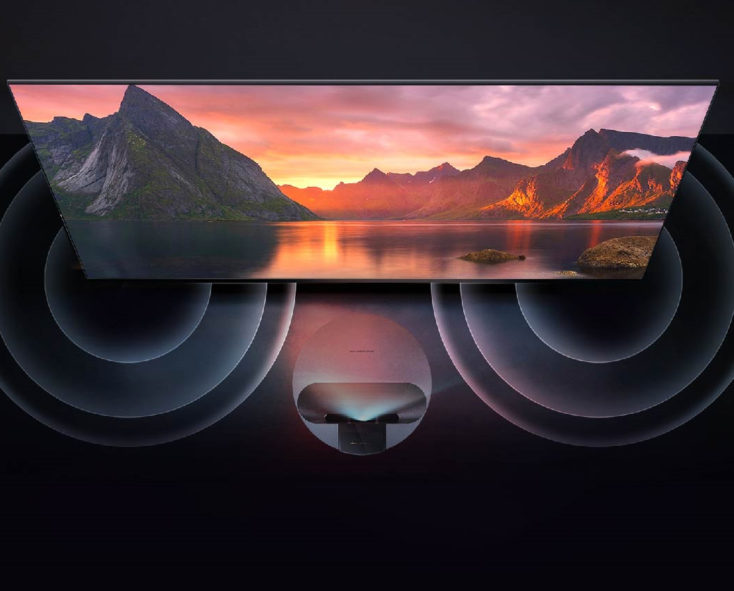 Sound is also taken care of accordingly. The Fengmi R1 has two 10W speakers that support DTS-HD and Dolby Audio. Thus, it offers a bit less power than the Xiaomi Mijia 4K projector, for example.

The Fengmi R1 ultra-short-throw projector is not the best UST projector from China, with the price likely going to the Mijia 1S 4K. In return, the Fengmi is cheaper, offers a projection area of up to 200 inches and has a bit more RAM. Since the OS might only be usable in English, casting via Miracast or iOS is also handy. But are such short-range projectors worthwhile at all, or is the Xiaomi Mi Smart Projector 2 Pro just as good?