0 Kommentare September 25, 2021by Jens
Hey, guys! Just a heads up: The linked offer is already a bit older and the price of the gadget might have changed or it might not be available anymore.

With the Fimi X8 Mini, the Xiaomi offshoot Fimi is launching a new, compact drone in 2021. This is apparently an attempt to offer an alternative to the DJI Mini 2, which has very similar features. The new Fimi drone will have to be compared and measured against it. The small drone has more similarities with its direct predecessor than with DJI’s version. We’ve tried out both the Fimi X8 SE, DJI Mavic Mini and now the Fimi X8 Mini. Read what we think of Fimi’s latest drone here. 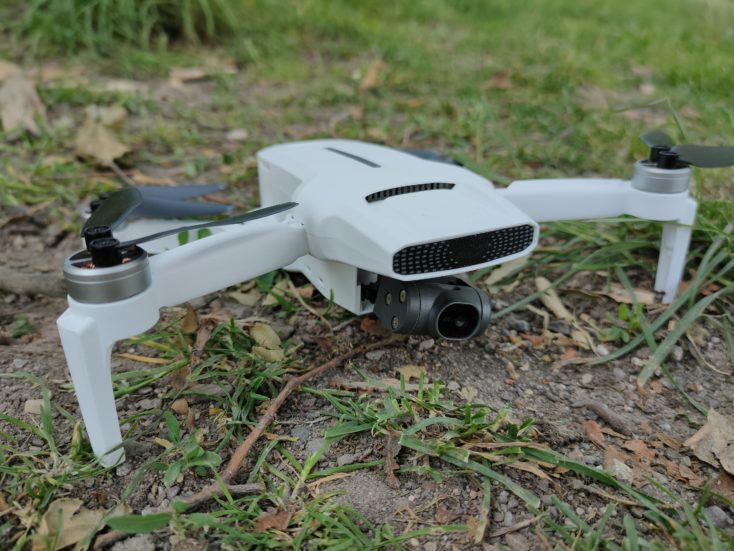 Mini drones are very popular. After DJI launched the Mavic Mini, well, a mini version of the Mavic, other manufacturers are following suit. Fimi also brought an X8 Mini to the popular X8 SE, while Hubsan has meanwhile released a Zino Mini Pro. DJI is even on its second version and has already introduced the DJI Mini 2 in November 2020. And of course there are all kinds of clones and replicas that use the design and are offered for 50-100€ (60-$100) – what I think of them, I already talked about it more than a year ago.

Time to take a look at the Fimi X8 Mini. The Fimi X8 SE in particular was very popular last year and found many buyers. I was also enthusiastic about the Mavic alternative in the test (which was two years ago). It will be exciting to see how the new Fimi drone will perform.

We got the drone from Banggood. Here, they are available from time to time in an EU warehouse with correspondingly fast shipping. Note that Banggood specifies “VAT included” for all shipping methods, so no taxes or customs duties should apply.

Small drone, small box. The packaging doesn’t take up much space, which is reinforced by the fact that everything was really stowed away to save as much space as possible. We have a typical white cardboard box with contents and technical data printed on the side. The drone can be seen on the front or top, and also in the alternative color red on the back.

For the drone and the remote control there is a suitably shaped insert each. Cables, spare parts and instructions somehow find a place in between. By the way, the two inserts are not made of plastic but of a kind of cardboard – nice.

Since the drone is stowed pretty securely here, the box is still suitable for transport even after unpacking. Of the three different cables for the remote control (Micro-USB, USB-C and Lightning), you usually only need one; you can also put the manual aside. That way, you also get everything stowed away again well.

Design and workmanship of the Fimi X8 Mini

I don’t want to talk about the “typical Fimi design” yet. With the Fimi A3 and the Fimi X8 SE, Fimi’s drone portfolio is still quite manageable. In addition, the new drone looks a bit more angular and, which is also due to its small size, beefier. Overall, it reminds me a bit of the DJI Spark, which kicked off the popular mini drones a few years ago.

What it has in common with the other Fimi models, however, is the black stripe on the front above the camera, as well as the white color (but alternatively red this time). The arms are of course foldable, folded the drone comes to 145 x 85 x 56 mm. When unfolded, it measures 200 x 145 x 56 mm.

The drone is quite light – 164 g without the battery – but sufficiently solidly built. The plastic doesn’t feel as “cheap” as you’d expect from very inexpensive drones, but it’s definitely not as sturdy as the Fimi X8 SE.

The rotor blades alone are a bit annoying, as they always swing around a bit loosely even when folded. You can remove them, but only with a screwdriver, which you don’t really do between flights. (The Fimi X8 SE simply had removable propellers.) If you want to transport it other than in its original packaging, because the box might take up too much space, you have to be careful that the propellers don’t get caught anywhere or bend over.

There are basically two types of remote controls for smartphones. You either flip or pull out a mount – either up or down – and plug the phone in there. That’s how DJI solves it on the Mavic Mini and Mini 2. The other option is that the remote itself can be pulled apart and the phone is clamped in the middle. That was already the case with the X8 SE and is solved that way again here. The smartphone is a bit more stable since it is held between the hands, but the grip is much wider. In my experience, this does not make a big difference.

There are also – I mean, the Spark had introduced it back then – removable sticks that are clamped into the bottom of the remote control. By the way, there are no spare sticks included, so you should not lose any of them. A USB-C port on the bottom serves as a connection for both charging and connecting to the smartphone.

There is not much in the way of buttons. Besides the power button, there are three buttons for auto-start (or landing) and as triggers for photos and videos. Behind the left shoulder button sits a wheel for tilting the camera.

The grips could be a bit bigger, but apart from that, the remote feels good in the hand.

The drone can be launched in two ways. Anyone who has ever flown a drone will already know both. The classic variant is to move both control sticks inwards and downwards so that they form a “V”. This starts the rotors and you can take off by pushing the left stick up. ” This is how (or similar to) many drones took off before there were automatic launches and altitude controls. Nowadays, there’s an auto-start button for that, which lets the drone take off on its own and stop at about 1.5 meters. Of course, the Fimi X8 Mini also has this. 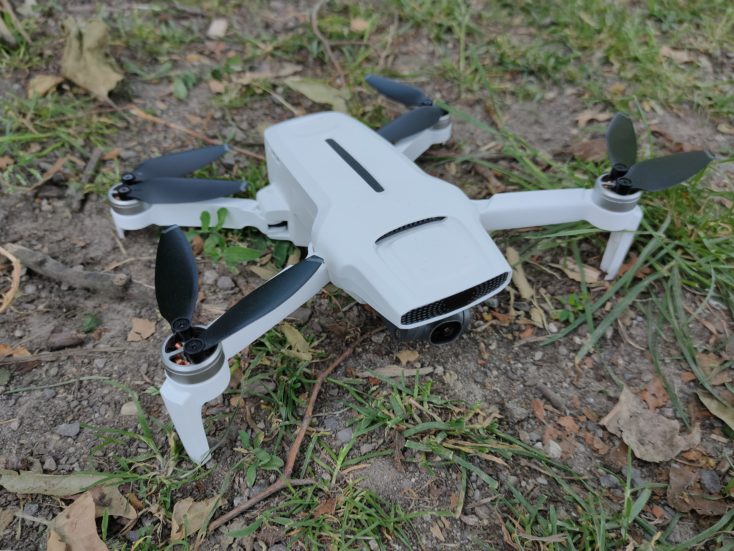 The drone basically flies well. One difference to its big sister, the Fimi X8 SE, however, is definitely its smaller size and greater susceptibility to wind. Even when there is almost no wind on the ground, you can clearly feel the X8 Mini dancing in the wind at higher altitudes. This does not have a major impact on the pictures, but it definitely ends sooner than with the X8 SE. It could also hold its position better on the ground; there was a bit too much movement for me. 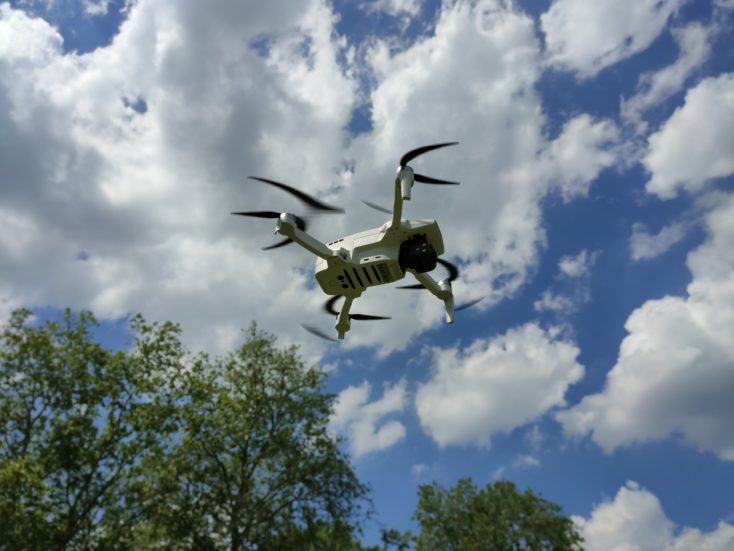 Apart from that, however, the controls are top notch. The drone accelerates and brakes well in all speed modes. You only have to be careful if you are used to obstacle sensors. The X8 Mini does not have any and does not brake on its own. So pay attention to where you are flying. (The same is especially true for tracking shots, which we’ll get to later. If you’re not careful, the drone will hurtle into the nearest tree).

There are three speed modes, as is common with many comparable drones. In beginner mode, the flight altitude and range are limited in addition to the speed. The exact values can also be set here, for example if you don’t want to fly higher than 50 meters or further than 100 meters.

As usual, the Sport mode is the fastest, here the drone brings it up to 57.6 km/h (the official specification is 16 m/s). That doesn’t just feel fast, that’s pretty fast and especially suitable for open terrain.

Of course, there are also all sorts of smart flight modes. Whereas, it’s not that clear, because the DJI Mavic Mini, for example, doesn’t have a tracking function. This distinguishes the small Fimi from DJI’s version.

The features here work similarly well as they do on its big sister, the Fimi X8 SE. The desired target is marked with the fingers and then tracked or circled, depending on which function you would like.

Namely, the five different functions are:

The app is not only an accessory for the drone, but essential for its use. Yes, you can fly and even film without the app, but you won’t see what you are recording. All settings, both for the camera, the flight characteristics and information about the drone can only be found in the app.

The Fimi X8 Mini gets its own app. The Fimi Navi Mini app can be found in the Google Playstore as well as in Apple’s App Store. An account is not necessary. Download the latest firmware (which is automatically displayed), install it on the drone, and you’re ready to go.

Strictly speaking, there’s nothing to note here that hasn’t already been mentioned in the topic of controls or functions. The design is clear, but doesn’t differ from other apps, be it from Fimi, Xiaomi or DJI.

Fimi updates the firmware of the drone regularly, every now and then you will find a corresponding note when starting the app. There is then a log with the changes. The current firmware version at the time of testing was 1.0.8.

The Fimi X8 SE was and still is a popular alternative to the DJI drones. The X8 SE is not quite as sophisticated as a Mavic 2 Pro, nor does it come close to the camera quality, but it also costs just a fraction of the price. The price difference between DJI Mini 2 and Fimi X8 Mini is not quite that big, but the new drone is still significantly cheaper.

The drone almost seems like a successor to the Fimi X8 SE than just a mini version. The range of functions is hardly inferior to its big sister, and the camera is also equivalent on paper apart from the smaller sensor. The price is even higher than the current offer prices for the X8 SE. It is also almost as fast at 16 m/s.

So it even offers more options than the DJI Mini 2, whose focus is on short dronies, but which offers hardly any tracking features. In return, DJI offers a very good app for video editing. Whether Fimi can offer the same remains to be seen.