0 Kommentare December 14, 2021by Thorben
Hey, guys! Just a heads up: The linked offer is already a bit older and the price of the gadget might have changed or it might not be available anymore.

With the FlyNova Pro, the manufacturer has probably released THE gadget 2020 for us, which has picked up speed again this year through TikTok & Co. The small racing cars on the FlyNova Trailblazer are also picking up speed. The Trailblazer is FlyNova’s newest toy, which immediately sparked a discussion among us about how big we can raise this car racing track 2.0 in our office!

What is the FlyNova Trailblazer?

Surely many of you still know the popular car tracks of the brand “Carrera”, perhaps they have even been passed on. The Trailblazer builds on them, but takes them to a new level similar to the FlyNova Pro the Frisbee. The Trailblazer is therefore the “most flexible car racetrack with countless stunt possibilities”, to loosely translate the advertising slogan. The racetrack consists of 200 flexible parts and has a total length of 4.87 meters. Provided you take the largest package and only one of them, theoretically you can also put together several sets and thus build even larger tracks.

So you can just build a set of the FlyNova Trailblazer, a big circle and let a car drive in circles for 17 hours. You can also build the track across your own living room, using a Roborock S7 as an obstacle, attaching the track to the wall above the couch so as not to annoy anyone and adding a loop. As Confucius said, there are no limits to your imagination. This is a DIY 3D STEM race track, just to use a few buzzwords. STEM? Science, Technology, Engineering and Mathematics, so you should also learn something while playing. Another reason. 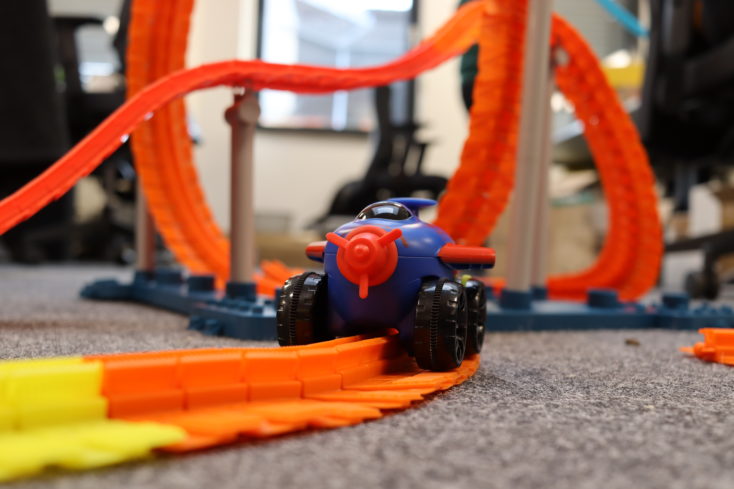 How is the Trailblazer made?

First of all, it’s important to note that this is (also) a children’s toy and a toy for adult children. The material is free of toxic substances, has no small parts that can be swallowed and no sharp edges, which means that it is also suitable for children. This has also been certified, for example, with the CE mark. We have certainly received almost 800 of these individual parts and can only confirm the promise. The track sections are well processed and not sharp-edged. 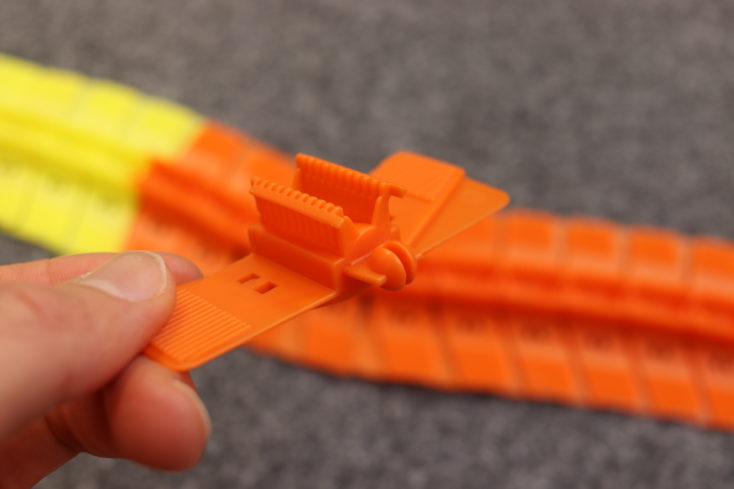 The individual parts of the track are very flexible and can thus also be rotated by approx. 90° so that they can be attached to the wall or even overhead. You simply plug the track sections together. This in turn requires a little more force than initially assumed, and you can “hurt” yourself a little. But the sections then hold together well and only loosen again when greater force is applied. 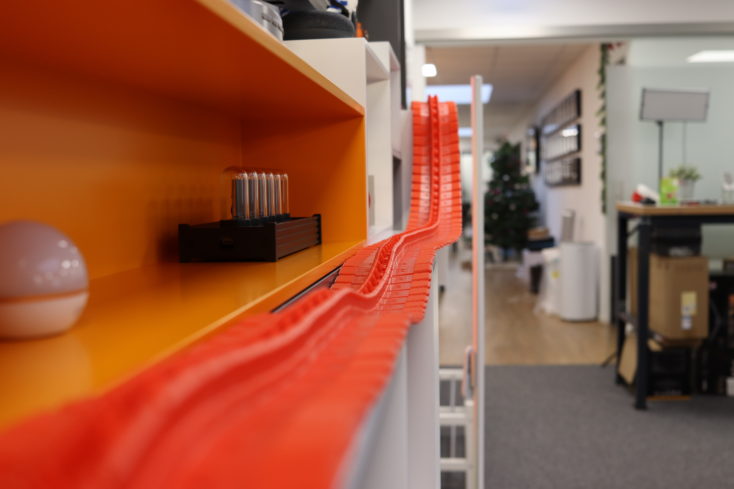 It is important to mention that the track sections themselves do not stick. So if you want to attach them to the wall, you’ll have to use double-sided tape for that, for example. We simply used Blu Tack.

With some of the sets, you get one or more track bases in addition to the track and the car. One such base consists of eight blue base parts that make up the base for the expandable support poles. The poles can be adjusted in height and consist of several parts. The track can be clipped into the support relatively easily, and they can be rotated by about 180°. If one has such a base, the track can be built in height even without a table or wall. These supports are also almost indispensable for loops.

The only thing missing are the cars. Flynova offers two TrailBlazer cars: the “Blue Voyager” and “Red Fury”, which differ slightly in design but mainly in color. Similar to a real roller coaster, they hold tight to the track by their own “landing gear”, so they can go overhead without falling off. This means that you always have to unravel the track at one point to get the car onto the track. However, we were able to find a quick release plate in some of the pictures, but it doesn’t seem to be part of the sets and wasn’t included in our package. 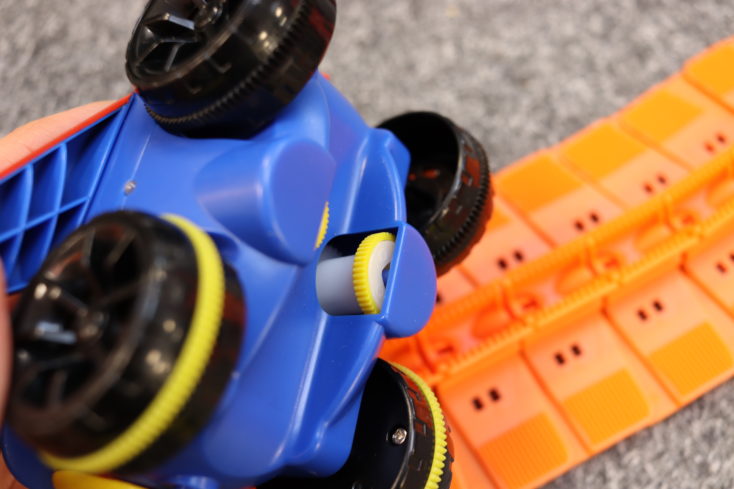 Three AAA batteries (order here on Amazon) provide the drive. For our six cars here, that also means 18 batteries. The cars stop automatically after three minutes, and the batteries don’t last very long overall. It is estimated that this is enough for a runtime of about 15 minutes, although you will notice that the performance weakens a bit sooner. 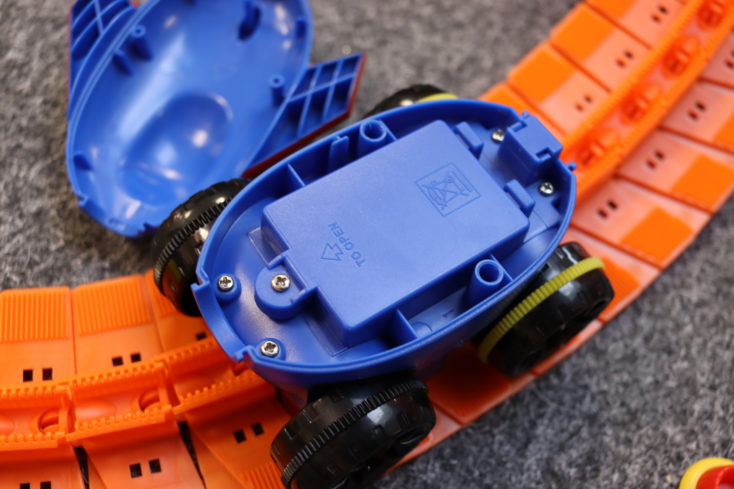 There is also some kind of foam or rubber in the front and back to protect the cars from collisions. If you hold the car briefly while driving, the car stops. The workmanship is overall okay, but the foam parts partly fall off during use, but can be easily reattached. Oh: They can even light up – nice!

There are no limits to the imagination

The main fun of the FlyNova Trailblazer is probably in the construction of the track, because there are really no limits to your creativity. You can of course just build a circular track, but that will get boring relatively quickly. You can integrate the track really well in your children’s room, living room or as in our case in the office. Thanks to the supports and the base, it can also go a little higher, for example, on the table. To be fair, however, it also goes relatively well without, the drive of the car is usually enough for just under 90 ° slopes.

Of course, it’s especially fun if you build the track over your desk, for example, or somehow through the bathroom or kitchen. In fact, especially with particularly daring curves or loops, there is a feeling of tension as to whether the little car will make it. There are definitely turns that are too steep or sometimes the edge gets stuck somewhere so that it stops. When you then readjust to make it, it reminds you of Domino Day back then, except that Linda de Mol is unfortunately not moderating.

After a few stretches, you understand why FlyNova is talking about STEM learning here. The building, thinking, trying out and fine-tuning should introduce children to such a “building project” in a playful way and definitely promotes creativity. The actual fun lies precisely in this, but unfortunately not in driving. Since you only have one car on the track, in contrast to the Carrera track, there is no competitive thinking. That’s why we found that the fun wears off relatively quickly once the car is moving.

Similar to the FlyNova Pro, the FlyNova Trailblazer also has a lush trick repertoire. Several loops in a row are almost a bit boring, after all, you can also do the “Spiderman” and build the track across the kitchen cabinets. The parents are happy about that. Even further thought is the “hamster wheel”, where you build the track to a vertically standing circle and the car drives the circle to go that way. Alternatively, you can just bowl like this or have the car drive directly into the pins with an ending track.

It was also really fun for once to attach a round track to the head and have the car drive around the head. Some of the tricks suggested are a bit far-fetched in my opinion. For example, using the time of the track as time for basketball free throws is something I can’t imagine for the life of me. I also don’t really understand the “chase”, so that two cars drive behind each other, since one can’t overtake the other.

How much does the FlyNova Trailblazer cost?

FlyNova is offering several sets in the crowdfunding. The starter pack consists of 150 individual parts and a car. However, since you are already somewhat limited with that, we recommend at least the “Champion’s Pack” with 160 track parts, a car and a track base. This way, loops and the like are also possible. The expensive Grand Prix Pack includes two of these bases, 200 track parts and two cars. This results in about five meters of track. But you can also buy expansion packs like 200 more track parts or two cars. For our office track we got about four sets, so that would cost just under 300€.

Unfortunately, this is already the biggest problem for the FlyNova Trailblazer. You can buy it well after a while, but there are also alternatives, some of which you have already mentioned in the comments. If you have had experience with it, write us gladly. Possibly we can also strive for a comparison. 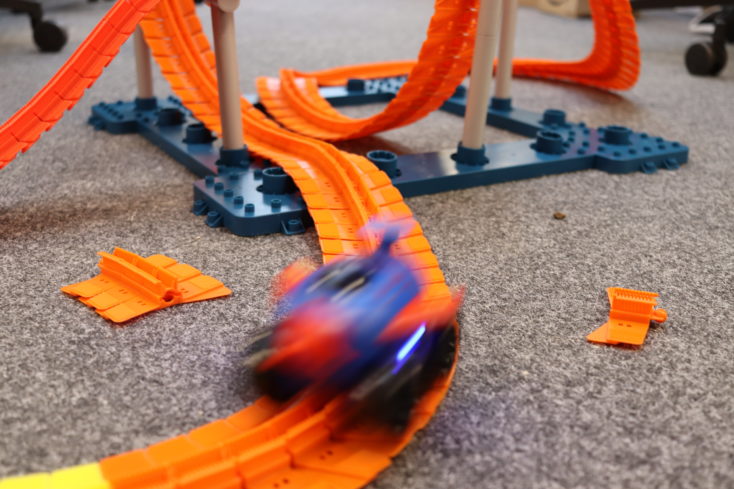 With the FlyNova Trailblazer, the manufacturer wants to land another hit like the FlyNova Pro, which really keeps us entertained for a long time. The Trailblazer doesn’t have that potential in my eyes, but it’s also a fundamentally different gadget. Setting it up is mega fun, you can be really creative, and just like before, you automatically sit down on the ground, try things out, and come up with the gnarliest obstacles. You can actually increase again and again and then also have the possibility to enlarge the track with an expansion set. So long until the place is completely full.

If you let the car drive, however, the fun wears off relatively quickly. Unlike the Carrera track, you can’t “practice” driving better here and since you’re alone on the track, it’s also not a competition. This is also completely fine, and can also make sense depending on the educational goal. But for a really big track that goes through half the apartment, you probably won’t get by with one or maybe two sets. Accordingly, the FlyNova Trailblazer can get expensive. But since there are starter and expansion sets, you can spread these purchases out well and gradually increase the Trailblazer when you realize that you or the kids are having a lot of fun with it.

I can very well imagine giving the Trailblazer as a gift, i.e. to children. I’m sure it would be just as much fun as a CaDA terminal block set. What do you think? Does the Trailblazer have as much potential as the FlyNova Pro?