1 Kommentare June 10, 2022by Thorben
Hey, guys! Just a heads up: The linked offer is already a bit older and the price of the gadget might have changed or it might not be available anymore.

More and more gadgets are wirelessly chargeable – fortunately! Apple is setting a particularly good example here, even if it is slow. As an alternative to the never implemented AirPower, there is a foldable 3-in-1 Qi charger, which is of course also compatible with all other wirelessly chargeable devices. 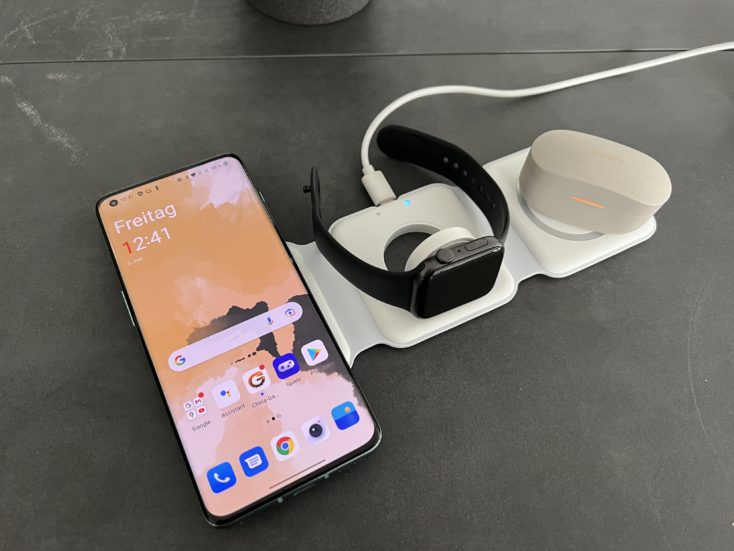 Foldable 3-in-1 Qi charger only for Apple?

The foldable charger is meant for Apple’s holy trinity consisting of iPhone, AirPods and Apple Watch, but is universally compatible due to the open Qi standard. The white design fits Apple, but the charger is also available in all-black. Basically, the unnamed manufacturer integrates three Qi charging pads, which can also be purchased separately. They are connected with a kind of silicone strap that makes them flexible and allows folding the charger. 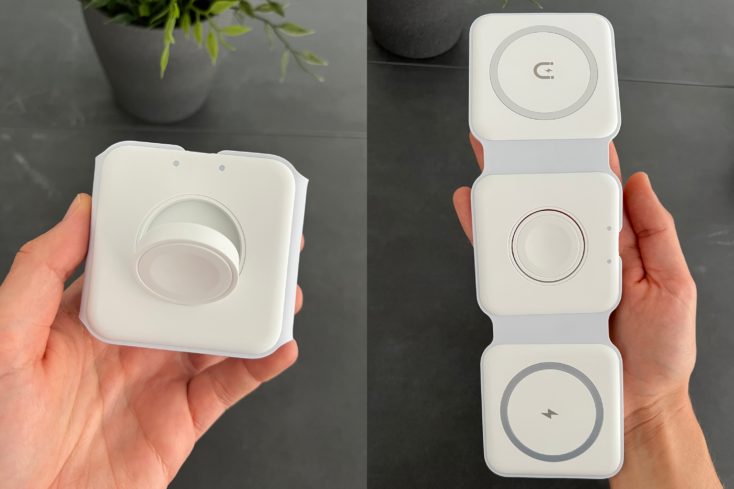 This is reinforced by magnets in the individual load surfaces, so that the surfaces “snap” together. This always has a slight fidget toy character. The possibility to fold the device makes it interesting for traveling, but also as part of the EDC (Everyday carry). After all, you don’t have to completely unfold it to use it. If you only need a Qi charging surface, the charger also works when folded. You can simply put the surface you need on top. The build quality is surprisingly positive. The white is a bit susceptible to dirt, but you do not notice that this is a no-name manufacturer. It could even pass as an official Apple accessory. 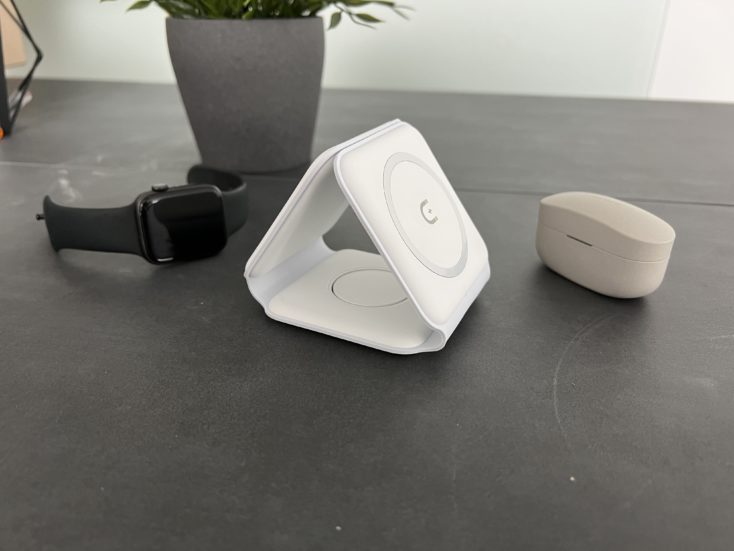 A USB-C port is integrated on the side of the center charging area for the Apple Watch. You can also turn the round Qi charger by 90° to position the Apple Watch horizontally on it. Only then does the display of the Apple Watch align horizontally as well. The left charging area with the magnetic symbol is intended for the iPhone or smartphone like a Xiaomi 12 and charges with a maximum of 15W. On the right, there is room for the AirPods or wirelessly chargeable headphones like the Soundcore Life P3, which charge wirelessly with a maximum of 3W. The smartwatch in the center gets 2.5 W of charging power.

For full power, the foldable 3-in-1 Qi charger requires 24W of charging input power. A charger is not included, but a USB-C to USB-C cable is. The two status LEDs (why only two?) in the center indicate whether the charging surface is charging successfully. In practice, charging works with all Qi-compatible devices. The surfaces are large enough, and the magnets help aligning MagSafe-compatible devices like an iPhone 13 Pro. However, the performance is so low when using all three surfaces at the same time that it is best to charge overnight.

For the fact that this is a no-name product, we are relatively positively surprised. Hekka, who also have some Xiaomi products in their range, delivered quickly enough. The workmanship is surprising, the functionality is absolutely sufficient and the idea including magnetic charging surfaces is well implemented. I even partly just used it as a fidget toy when it did not need to charge anything. I would have only wished for a third status LED. Compared to many other 3-in-1 charging stations for Apple, you simply have an enormous space advantage thanks to the design and it is cheaper. However, it is only worth it in my opinion when you have three Qi-chargeable devices with you permanently.