Need a motivation for going outside? Freeline Drift Skates for $30.60

3 Kommentare March 21, 2018 by Maike
Hey, guys! Just a heads up: The linked offer is already a bit older and the price of the gadget might have changed or it might not be available anymore.

A mixture of the best boardsports – snow and water included – on two small skates!? Outdoor sports and board lovers of all ages should now urgently read on. And so should the children inside us: some models have flashing tires when in motion. Need I say more? 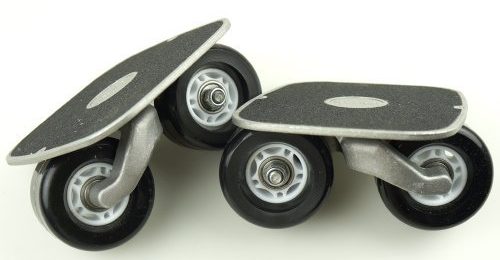 The principle of drift skates

It all began with the desire to find a way to overcome downhill routes better and, above all, more agile than with the skateboard or longboard. It quickly became clear that two independent skates were easier to drive and control: the drift or freeline skates were born, almost a hybrid of board and skates – ideal for speed and agility .

What a skateboard offers in terms of stability, the drift skates lack. Same with the support, inline skates would give. If you master them, however, you should get the feeling of a mixture of both: the maneuverability of inline skates and the possibility of tricks that are possible with the good old skateboard. The feeling is even said to be reminiscent of that of a snowboard or surfboard. The driving technique however resembles that of a street- or a waveboard – so quite promising!

The design is simple and reduced to the essentials: two plates coated with conventional griptape , under which two wheels are attached. Admittedly, at first they kind of look like the roller-skates you could fasten to your shoes as children. It however has two distinct differences: The skates have no bindings and are therefore not attached to the foot or the shoes. Furthermore, the wheels are mounted slightly angled to the sides, not forward-facing. 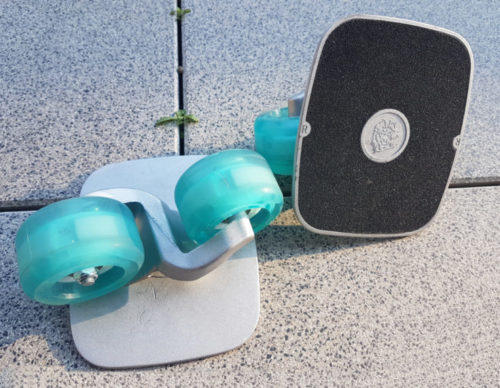 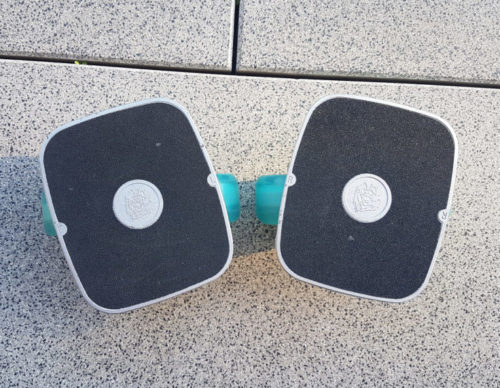 So how do you skate with the freeline drift skates? The position of the skates and thus of the feet is important when mounting. Initially we thought they were aligned with the boards. They are, however, aligned through the wheels: Placed in a straight horizontal line, the skates should point obliquely outwards. There are also clear markings to get the sides right: R for right and L for left. Self-explanatory, right? In theory, you push off with one foot, similar to inline skating. Then, as with streetboards, you move your body in twisting motions, controlling it in snake-like lines. According to fans of the comparatively young funsports gadget, this is supposed to be even easier than street or skateboarding. But at this point however I need to confess that I failed miserably. But since I’ve seen what you can do with the skates, I’m quite motivated to do it anyway.

Do not worry: Even if you don’t like boards in general (like the majority of our editorial department): The freeline drift skates also have a lot of fidget toy potential and offer a lot of fun even when you sit – once under the feet, you can hardly sit still and can’t stop rolling them back and forth and still have both hands free for work. ?
However, if you now feel drawn outside, you might find more inspiration in the following video. Especially in Asia they are quite popular and when we’re being honest, they look like a lot of fun. Especially when you consider that they are not just combining two, but several board sports. Although it is a bit complicated at the beginning, it is like with all new things: practice makes perfect. This will not be no different, I promise..