1 Kommentare September 8, 2018by Thorben
Hey, guys! Just a heads up: The linked offer is already a bit older and the price of the gadget might have changed or it might not be available anymore.

We’ve seen the FunSnap iDol Selfie drone a couple of times now. First it was sold on the Chinese sales platform youpin by Xiaomi, before it also found its way into the well-known online shops. But it is produced by the Chinese manufacturer FunSnap. In addition to the 1080p camera, they feature various AI functions.

Did the little “i” really have to be? Just to somehow make a resemblance to Apple, even though it doesn’t make any sense at all in “Idol”? Well, as a present. Let’s look directly at the exterior of the iDol. This is a concept that has already been applied to some smaller drone models. Like a butterfly, the left and right rotors can be folded like wings. The surface is halved, the drone can be transported more easily. Outside at the “wings” there is another support, so that it has a firm stand also in unfolded form.

The camera and battery then logically sit in the middle section. The camera is facing forward and can be tilted 90° downwards. There is no room for a suspension (gimbal). Unlike most drones, the battery is not plugged in at the back or bottom, but at the top.

With a weight of 360 g, the drone is relatively heavy. For comparison: The RYZE Tello (with a weaker camera), which is almost $50 cheaper, weighs only 96 g, less than a third. The much more expensive DJI Spark is still lighter with 302 g.

The camera makes videos in Full HD with a frame rate of 30 fps. So we are (at least on paper) in the area where we can talk about “nice” shots. Below that there is usually nothing with presentable videos. A big influence on the quality here will be how quiet the drone flies, as there is no active electronic image stabilization. The photo resolution is 2688 x 1520 pixels, i.e. 4 megapixels. The images are stored directly on the drone, which has 8 GB of memory. There are some “smart” features for that. These include, above all, an auto-follow function in which the iDol flies after a defined target. It can also be controlled with hand gestures, such as the DJI Spark. 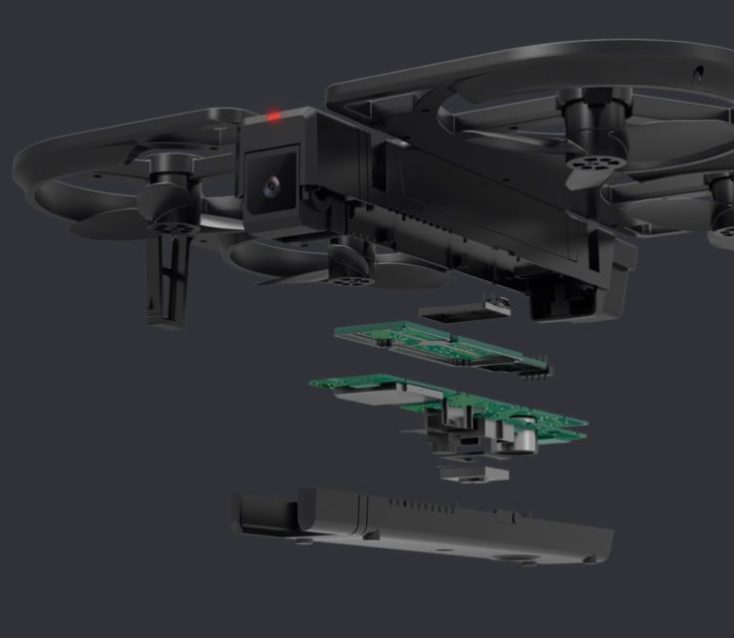 Of course – you almost don’t have to mention this anymore with current drones – it has Altitude Hold. This means that it automatically maintains the flight altitude, which is achieved here using a barometer and ultrasound. An optical flow sensor on the underside ensures that the drone maintains its position even in rooms. GPS is available for this in the open air.

Even if there seems to be an optional remote control, the control is mainly done via app. This is now also available in an English version, so you don’t need any knowledge of Chinese. Here we don’t expect any great novelties, but a solid, usually drone app. In addition to the control via virtual joysticks, various settings can be made, recordings made and viewed. In addition, you can see the live image of the camera on the smartphone display, which is transmitted with 720p resolution.

The battery is quite large with 1800 mAh, but the motors must also get 360 grams in the air. This results in a maximum flight time of ten minutes. Additional batteries can be bought later, and many sellers offer the iDol directly with two or three batteries.

The Full HD camera and the practical format actually make me want more. On the other hand, there are a few concerns that make me doubt the drone. The comparatively high weight is only a small point of criticism. You should notice the lack of electronic image stabilization, especially since there is no gimbal. An important point, which I have not yet dealt with, is the WLAN frequency. Like the Mitu drone, the FunSnap iDol transmits on the 5.8 GHz band, which most smartphones don’t support. So many people won’t be able to use the drone at all.

If you’re not looking for a (selfie) drone for videos, but primarily for photos, you can instead go for the cheaper RYZE Tello without hesitation. It is lighter, flies longer and makes reasonable recordings (and unlike the iDol can be flown with any smartphone). For really good videos (and not nearly in this price range) you still prefer the DJI Spark.