GameSir X2 Type-C Mobile Gaming Controller for $61.92 from US Warehouse

4 Kommentare November 22, 2020by Timm
Hey, guys! Just a heads up: The linked offer is already a bit older and the price of the gadget might have changed or it might not be available anymore.

Do you play on your cell phone? And if so, what? Mobile Gaming splits the spirits. While many PC and console gamers (albeit often jokingly) regard mobile games as second-class games, their market share is nevertheless growing steadily. In other countries, especially China, games on smartphones dominate the market anyway. One problem with smartphones is the lack of controls that a gamepad offers. To counteract this, there are gadgets like the GameSir X2, a controller for smartphones with USB-C connection (sorry iPhones). 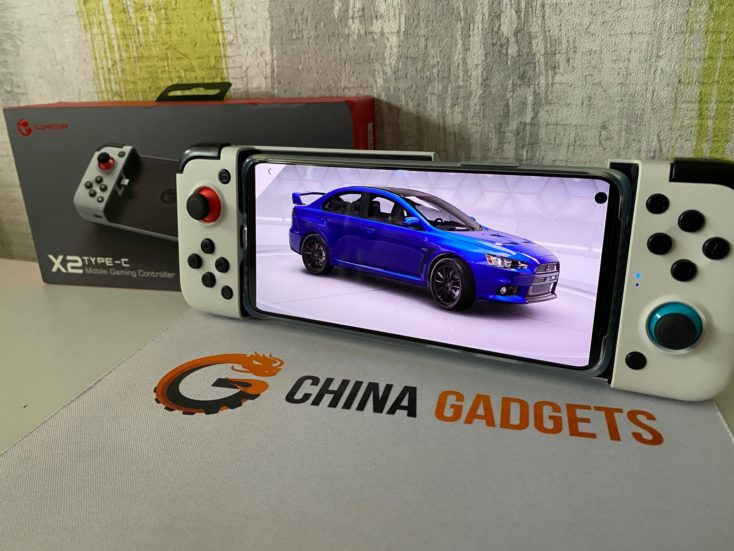 One thing speaks directly for the gadget: its design. In my opinion, it is one of the most beautiful gamepads for smartphones I have seen so far.

As far as the available buttons are concerned, we are dealing with a full-fledged controller. Two analog sticks, four buttons left (“control pad”) and right (A,B,X,Y), as well as start and select equivalents and two shoulder buttons on each side, so that should cover everything. The two additional buttons at the bottom of the front are a home button, which actually sends you back from the game to the home screen of your phone, and a screenshot button. 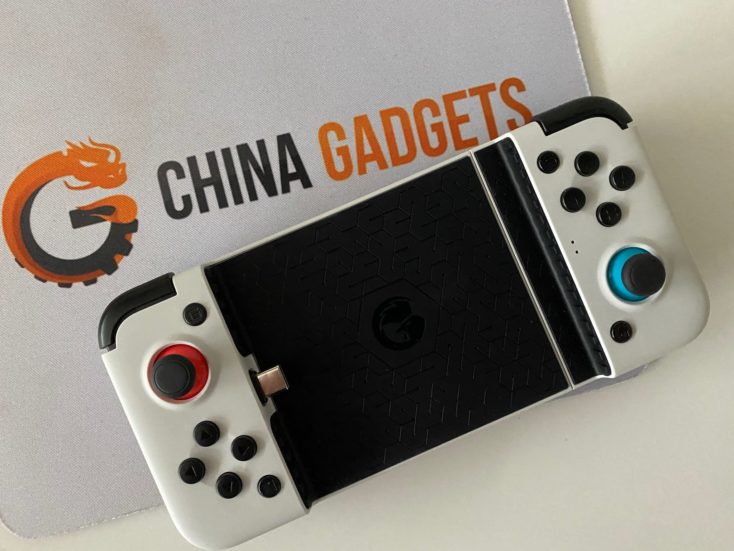 I (and probably you as well) instantly think of the Nintendo Switch in handheld mode with the arrangement of the sticks and buttons. The GameSir X2 can’t deny a certain resemblance to the console. It doesn’t, but instead the association with the switch is strengthened by coloring the analog sticks red and blue, very nice rascals, the ones from GameSir 😀 . 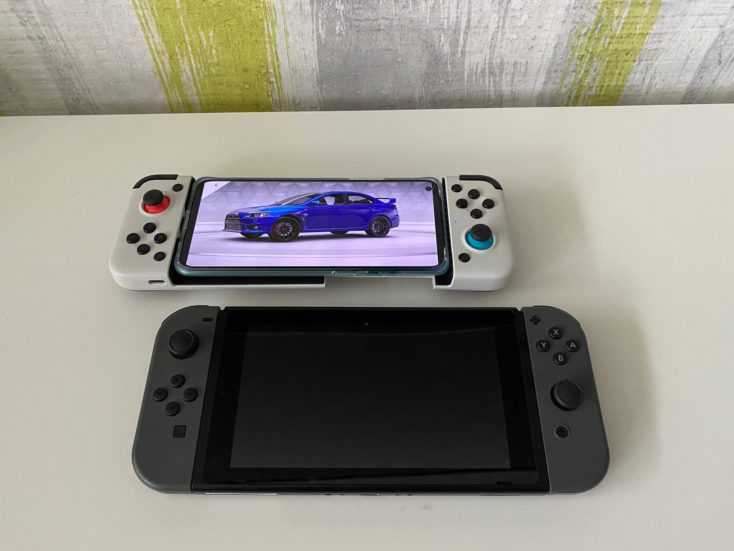 Like the design, the workmanship of the GameSir X2 is first class. First of all the pull-out mechanism should be mentioned here, which offers a good resistance and keeps your cell phone so firmly in your grip. In addition, nothing wobbles or rattles here, so everything feels valuable. Of course, your cell phone does not touch the bare plastic, the complete “mobile bed” is rubberized, which protects against scratches and additionally prevents slipping.

Talking about plastic, I can’t find any weaknesses in processing or material. All buttons, the analog sticks and shoulder buttons give a good feedback, nothing wobbles here either. 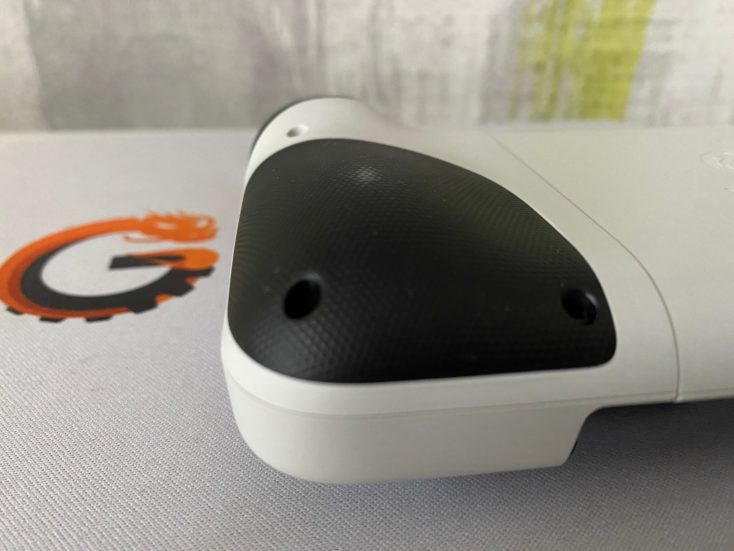 I especially like the fact that GameSir not only took care of a good grip of the phone, but also a pleasant feeling in the hand. So there are two rubberized, outwardly curved surfaces on the back, which are ergonomically aligned with the ball of the hand – very nice!

Is my phone compatible with the GameSir X2?

Smartphones with USB-C connection are supported. The corresponding plug is integrated directly into the gamepad and can be folded upwards at an angle to make it easier to insert the phone. So you don’t have to worry about scrapping your USB-C port in the long run. A Bluetooth connection is not necessary thanks to the USB-C connection. Smartphones that are still equipped with a micro-USB port or even use their own port, which is not used by any other manufacturer, will be left behind. (iPhone again haha) 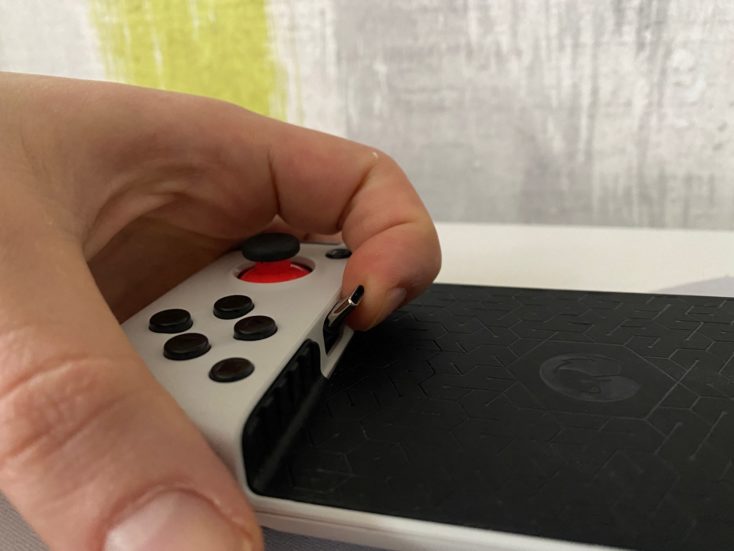 The controller does not have its own battery, but draws power from the smartphone. According to the manufacturer, however, the consumption should be as low as possible so that it should not have a major impact on the runtime of the smartphone battery. In the test, the energy consumption during playing is higher anyway, but I can’t say that the GameSir X2 makes it even more so. 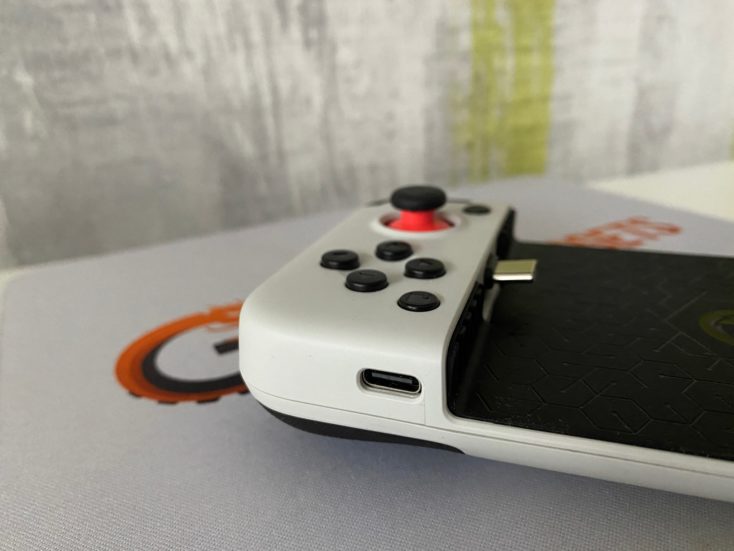 Although the smartphone cannot be charged directly while playing the game, there is a USB-C port on the controller itself, which makes this possible indirectly – this was taken into consideration!

We have equipped the GameSir X2 with

In the test, all smartphones immediately recognized it as a controller, and even though it is probably not what the inventor intended, the horizontal controller can be used to immediately navigate through the vertically arranged apps on the home screen. An app or initial setup of the controller is not necessary, very good! 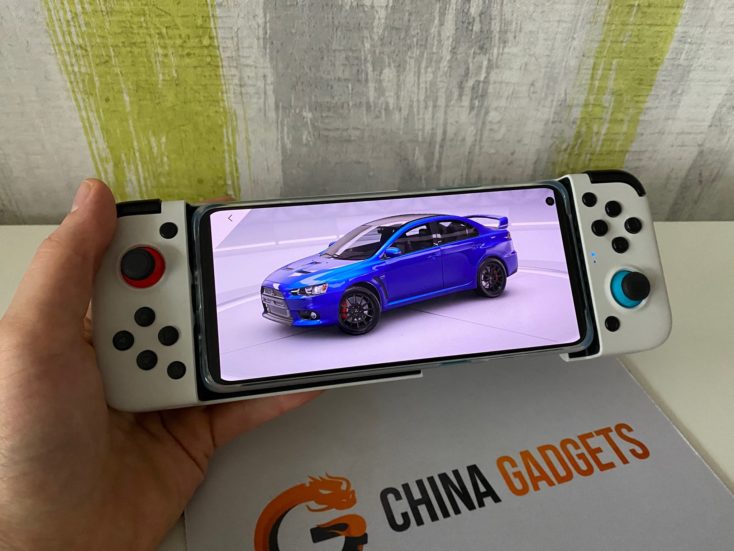 The GameSir X2 makes mobile gaming pretty cool, in combination with the right gaming. If you don’t necessarily want to spend $200 on a Nintendo Switch, but don’t want to miss out on a bit of gaming on the way to work, school, university, etc., you can pimp your cell phone and the gaming experience on your cell phone powerfully here.

You can find more compatible games in the GameSir overview. In the test I suddenly had real fun with mobile gaming. Building your own world in Minecraft, a few rounds of Asphalt 9 or even GTA is much more appealing with the GameSir X2, on the level of a handheld and no “half-finished” mobile playing with touch buttons.

The analog sticks react precisely and it is also possible to control with “feeling”. So there is not only steering or not steering, but also light steering or an in-between running and not running – running slowly. All this can be controlled much better with the GameSir X2 in the test than with the virtual controls.

Not all games compatible

Unfortunately not all games support mobile controllers like the GameSir X2. In my opinion the problem here is more likely to be a lack of implementation within the game programming than with the GameSir X2 itself. Although there are key-mapping apps for Android, with which the virtual buttons on the touchscreen can theoretically be “linked” to a mobile controller, a look at the reviews of these apps, such as Octopus, reveals that this is neither compatible with all cell phones, nor does it work reliably overall.

This was also my experience with the OnePlus 8T. The app constantly crashes, mapping impossible. It also requires a lot of rights and an in-app registration with your PlayStore account, where you might have a credit card on file, I’m a bit uneasy about this.

Tested mobile games that do not work:

Should you buy the GameSir X2 Controller?

But we still have to talk about the price. As much as I like the device, a regular price of $70 is just not a small amount of money for a smartphone gamepad. However, it is very well made and in my opinion it offers a real added value for compatible games.

In the end, everyone has to know for himself if the GameSir X2 is worth it or not. For example, if you already play one of the mentioned compatible game apps on your cell phone regularly, then the GameSir X2 is almost a must in my opinion. It simply makes the gaming experience more precise, more pleasant, more intuitive.

Even if you’re thinking about buying a handheld à la Switch to bridge travel times etc., you can save money with the GameSir X2 if you have interesting and compatible games. Who simply can’t do anything with mobile gaming, but rather plays on the PC, PlayStation or Xbox, doesn’t need a controller – surprise.

GameSir is not a completely unknown brand. A while ago I tried another smartphone controller with the GameSir F4, and they are also producing a controller for the small drone Tello, which is sold by DJI.

What is your opinion about smartphone gaming and the GameSir X2?