0 Kommentare November 2, 2018by Thorben
Hey, guys! Just a heads up: The linked offer is already a bit older and the price of the gadget might have changed or it might not be available anymore.

The still “relatively” new Creality Ender-3 is a real announcement with its price. It’s not really an “upgrade” compared to the Ender-2, but it simply offers good printing results for as little money as possible. The Geeetech A10 is almost identically constructed and costs about the same. Geeetech is also a veteran in the 3D printing business, so a test was exciting for me. Is the somewhat less well-known Geeetech A10 even better than the Ender-3? My Geeetech A10 long-term test. 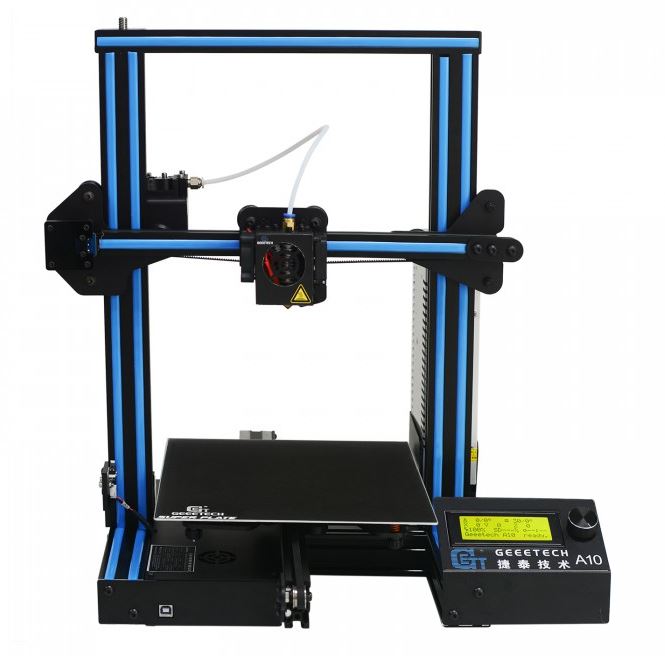 I have to say honestly: Geeetech doesn’t necessarily produce the world’s best 3D printers, but I like them very much in their price tag. Partly more sympathetic than Creality3D – more about that later. Since I didn’t have much time for the actual writing in the last months, I could at least take enough time for many prints and firmware games.

We ordered it from GearBest. After an average of 16 days (including the weekend) we received the package. Externally no damages were to be recognized. Also when opening and removing the two foam layers there were no nasty surprises. There have been no major problems with the actual shipping for years, but some manufacturers still can’t manage to properly secure their 3D printers in the package.

Contrary to the Ender-3, the unpacking is very noticeable: The assembly is already pre-assembled – so all you have to do is screw together the base, the display, the power supply and the assembly. The accessories are packed individually and safely in a box.

The concise operating and assembly instructions are illustrated and absolutely self-explanatory. I didn’t really need them, because there were a clear number of screws and components – thus options ;-). What attracted positive attention: The lower cover of the power supply and the hotend cover is made of more valuable metal than the Ender-3. The gap dimensions are smaller. Thus the Geeetech A10 looks neat or better designed, where the Ender-3 rather comes across as a “quick shot”. 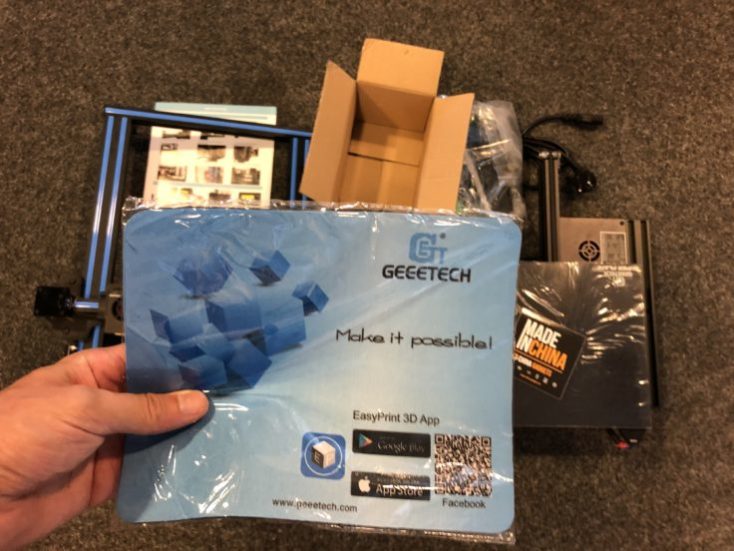 The Geetech a10 comes with a mouse pad. “You could ask yourself “Why?” here – I find it somehow charming. Only the rubber feet attracted my attention negatively. These are only cut rubber discs, which were glued under the aluminium profiles. 50% (i.e. two pieces) have fallen off. A bad quota. ? Well then: superglue underneath, put the 3D printer back on it, just wait … problem solved.

By the way: The A10 is also available in different versions and upgrade kits. Optionally, depending on the shop, a filament sensor and/or an autoleveling sensor can be ordered. The A10M is the dual extruder version. With GearBest you can also choose between the EU and US versions. Ultimately, only the connector type is different. Since it is a common cold appliance power cable, you can save money by buying the cheaper version and simply replacing the cable.

The accessories are nothing great: A few spare screws, an SD memory card (no-name, of course), some China tools (open-ended and Allen wrenches are enough for the assembly and disassembly), a few cable ties (not all manufacturers think about it) and a USB cable for the operation of a print server (e.g. Octoprint) or e.g. the installation of a new/other firmware.

This may seem “written down” so far, but I expect this from every 3D printer manufacturer in China by now (2018). Geeetech delivers good work so far!

Unlike some other 3D printers from China, you can actually start printing directly after assembly. Nevertheless, I would still recommend:

I could affirm all this with the A10. So I turned on the 3D-printer and let the axes move manually. Check – fits. Also the autohoming worked at first go. Now still the leveling – check. So it should be – top.

Next I printed out the sample code (dog.gcode – see below). In the ideal case, the manufacturer thinks about exactly what to enclose and slices the STL code as perfectly as possible for his 3D printer (and maybe even for the enclosed filament). 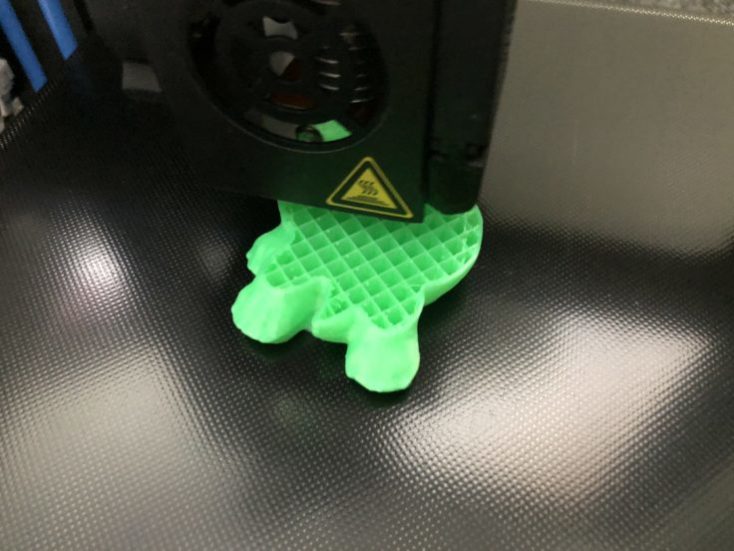 The former is definitely the case. The print result out-of-the-box is really impressive (keep the price in mind!) . Better than the Ender-3. The Ender-3 only managed these print results after the first tweaks. Unfortunately the dog is only a bit too big and the filament sample is not enough. So order filament at GearBest or strike at Amazon. 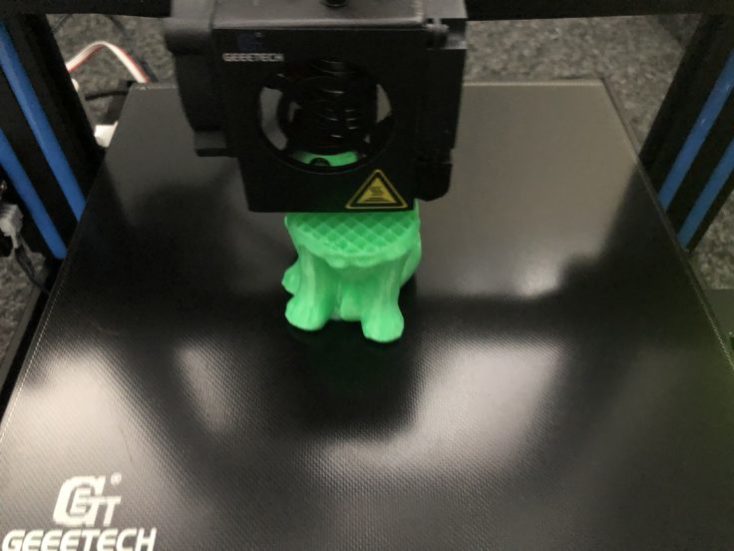 The dog also has a lot of details, but one can still ask oneself why a classic benchmark (e.g. modified Heattower, Benchy or Calibration Cube) was not included. This is even more meaningful – especially for beginners. Nevertheless: The surfaces are very smooth, there are no blobs, the overhangs look really good.

This has been confirmed in numerous prints. No matter if 40mm/s, or 70mm/s – the print quality fits perfectly.

In the middle of it I had to change the filament, which didn’t work out perfectly. Some feeder solutions are so bent that you have to unscrew the PTFE tube to insert the new filament. With the A10 this works “quite well” without much effort, whereas other feeder or stepper solutions are better. E.g. the titanium clone from TEVO.

When removing the print object I was happy: The “Super Plate” does just as good a job as the much praised “Ultrabase” from Anycubic – you don’t need a spatula, no rough force, no levering and no refrigerator. Apropos refrigerator: My secret tip is to put pieces that are too tightly glued into the refrigerator/ice compartment. The object contracts and sometimes even jumps off the plate by itself.

The Super Plate is glued to the aluminum plate of the A10 – there are no clamps or similar. That’s a pity. The A10 compensates the points with its volume. This is once again clearly below the Ender 3 volume. The Z-spindle is held neatly at the top of the frame and doesn’t clatter around – as with the Alfawise U10, for example. Also the hot end looks more valuable than the Ender-3. For the price I was really very positively surprised!

Since I don’t write about firmware updates very often, I’ll do this here on behalf of other Geeetech 3D printers. The procedure is very similar and thanks to the official forum you shouldn’t have any problems. Here is the manual. Updating was easy, just make sure to use an older Arduino version (and invert the Z direction if necessary). But it also works much more up-to-date:

But for this you should use a new Arduino version – in my case 1.8.7! Simply plug in the included USB cable (do not plug in power!), select the correct COM port and chipset (Arduino MEGA 2560) and overwrite the firmware after “compiling”.

The procedure is the same as for the instructions linked above. Finished – in 3 minutes. Cool: The Geeetech mainboard “GT2560” is subject to open source licenses.

Of course, the A10 has to compete above all with the Creality3D Ender-3. Both are almost on the same level. The differences are mostly trivialities: The Ender-3 has comfortably large level wheels, the A10 is better processed (power supply cover & no dents in the heating bed). The Ender-3 has the larger community, especially due to Crealitys good job with the CR-10, but Geeetech also has various Facebook groups and an “official” forum. In both channels the company officially comments much more diligently than Creality. Both feeders aren’t the best, but they are still “OK”. The display of the Ender-3 is a bit bigger/better. The A10 is faster to set up. The print quality of both 3D printers is very good for these prices – that’s the main thing.

For me the “Super Plate”, the lower operating volume and the Open Source Mainboard are the decisive points. The Geeetech A10 is (for me) the better 3D printer! But if the Creality Ender-3 is available as a bargain (my limit would be minus ~20-30%) you can also choose the Ender-3. In the end you may also rate other aspects higher or lower.

As a final alternative I would bring the Anycubic I3 MEGA into play. The installation space is similarly large (210 x 210 x 205 mm), it costs a little bit more, but also offers some more great features (two Z-axes, filament sensor & touchscreen).

The Geeetech A10 is a great 3D printer. I’m curious if it can change from an insider tip to an evergreen. Your assessment?