Merlins Beard! – The Golden Snitch as a Fidget Spinner for $3.59

1 Kommentare January 25, 2018 by Maike
Hey, guys! Just a heads up: The linked offer is already a bit older and the price of the gadget might have changed or it might not be available anymore.

Merlins Beard! I admit: Fidget Spinner never really captivated me . But what made me all the more hooked is Harry Potter – and, of course, Quidditch. No wonder then that I had to make an exception for this Golden Snitch as a Fidget Spinner without hesitation: 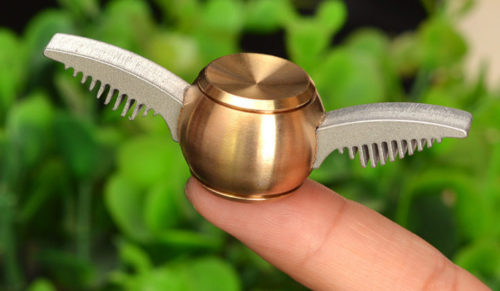 What do wizards actually do when they’re nervous? Well know we can assume they play with a golden snitch fidget spinner. With a wing span of 2.8in and a height of 0.7in it is a whole piece smaller than a real Snitch, but is probably also a lot easier. However, he only comes with a ball bearing, which probably disqualifies him for most of the spinner tricks – but let’s be honest, only muggles need more than one ball bearing.

So, straighten your house ties, find your magic wand at Ollivanders, and make your Muggle and your magical friends envious – with your very own Golden Snitch, which will not evade you as fast as the real one.