0 Kommentare August 18, 2021by Lars
Hey, guys! Just a heads up: The linked offer is already a bit older and the price of the gadget might have changed or it might not be available anymore.

After we already tested the LED TV backlight from Govee, we would now like to introduce you to the Govee Flow Pro Light Bars. These are two RGBIC light bars that can be controlled via app and voice recognition. In addition, this gadget also comes with a camera that can be placed on the screen and consequently sends the colors of the screen to the two light bars.

Some of you probably think of the Phillips Hue Play Lightbars, which have been on the market for a few years now, when looking at these two light bars. In fact, it’s hard to deny a similarity between the light bars. The triangular Govee light bars, which are encased in a plastic cover, reach a height of just under 25 cm. They have a matte black finish on the outside, while they are white on the front when switched off. Two table and two screen mounting brackets are also included.

The two light bars are connected by two cables, each 1.80 meters long, which become a common USB Type-C plug via a connection adapter. This results in a span between the two light bars of 3.60 meters, which means that they can be positioned at any desired distance.

There is also a matte black control box with three buttons. The top one is for switching the LED strips on and off. In the middle is the color button, with which you can switch between the individual colors. The lowest button is the music mode or brightness setting button. A short press of the button switches to the music mode, while a long press adjusts the brightness. There is also an indicator light that shows whether the control box is connected to the network or not.

There is also a camera in the package that allows you to synchronize the light bars with the image on a screen or monitor. It also comes in black and with a 1-meter cable.

Similar to the tested Govee WiFi LED TV backlighting, the light bars are Govee-typically controllable via the Govee Home App. A device such as a tablet or smartphone that has Bluetooth and WiFi connectivity is required to connect to the light bars. A connection with voice assistants like Google Home, Alexa or Siri is also possible. For such a connection, however, you have to plug the camera with its USB-A port into the control box. The disadvantage of this is that it has to be permanently plugged into the cable box. This makes it quite inconvenient for a user who does not plan to use the camera and only wants to use the light bars for ambient lighting. 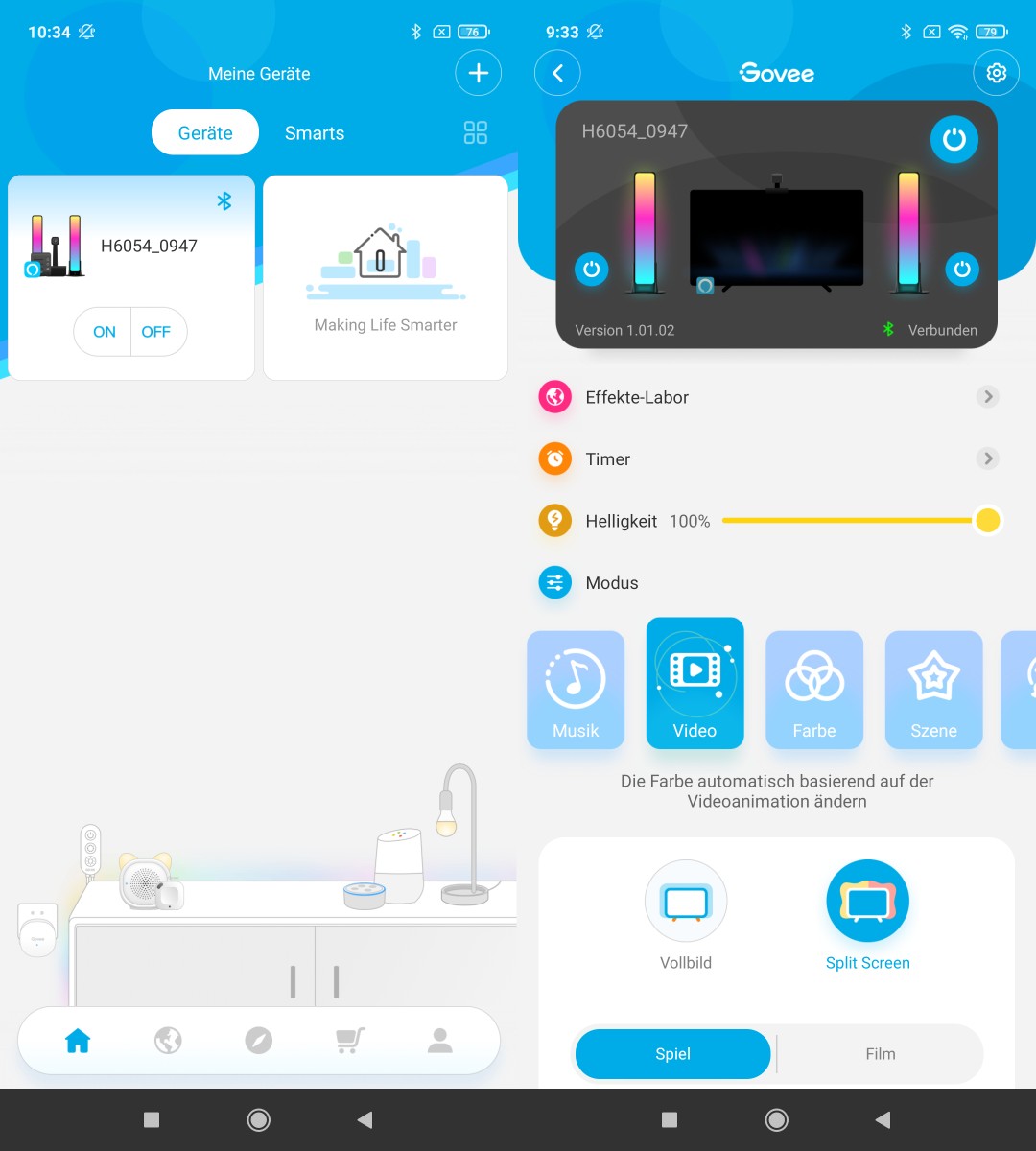 There are also some customizable settings for the Govee light bars. In addition to the classic brightness setting, the light bars can also be switched on and off individually. There is also a timer function that allows the user to determine when the Govee Light Bar is activated. An “effects lab” is also available in the app. This allows preset color compositions to be tried out and downloaded. 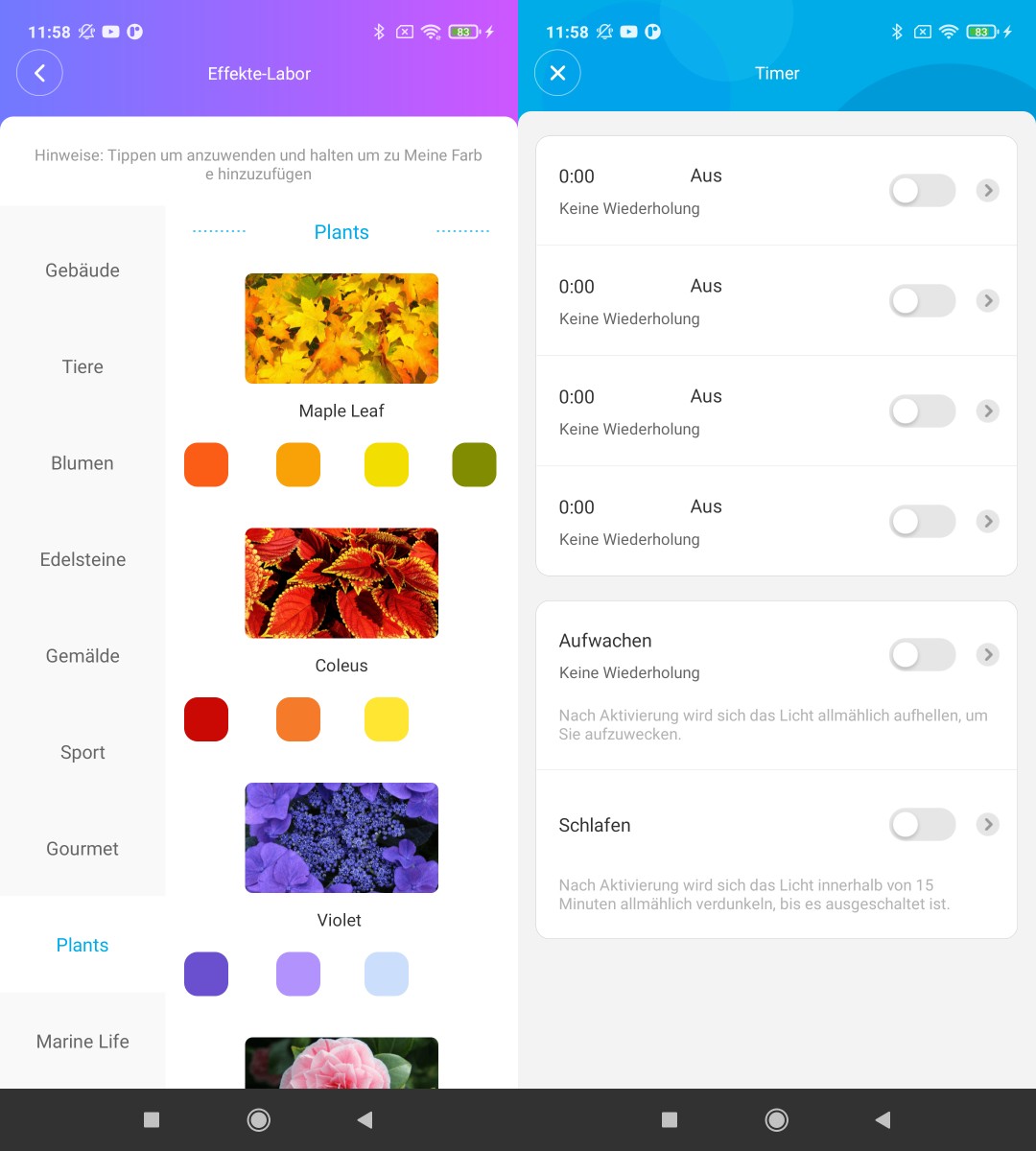 In addition to the options already mentioned, Govee also offers 5 other modes in the Home app for the Govee Light Bar. Under the “Color” item, as you can probably guess from the name, you can divide the bars into 6 individual sections each and adjust their color and brightness individually. The “Scene” function offers 12 color animations. Among them there is, for example, a setting for reading and movies. Then there is also the “DIY” mode, where you can give free rein to your creativity. You can set the colors of the light bars as well as effects with adjustable speed together and give the whole thing its own name. 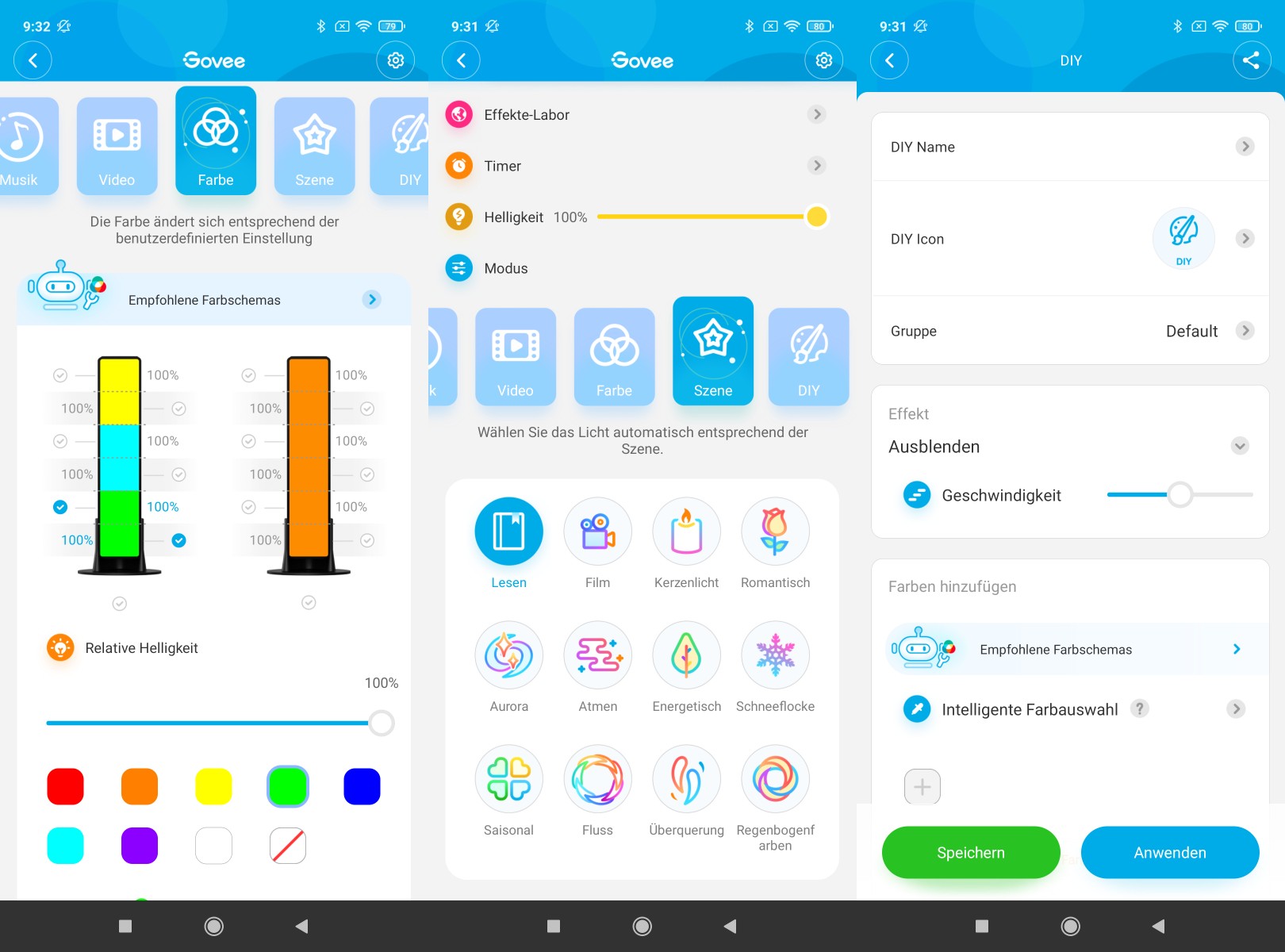 A microphone built into the control box allows you to synchronize color and sound in this mode. Alternatively, you can also use the microphone of the connected device. The sensitivity of the sound recognition and the color gradients can also be adjusted. In addition, the user can choose whether the light effects should look lively or react to a rhythm, among other things. Although the name of this mode says that the colors and light effects react to music, the ambient volume is also sufficient for the effects.

In this mode, the app uses the included camera. The options full screen and split screen can be selected. Then you can specify whether the content displayed on the screen is a movie or a game, and you’re ready to go! In addition, the saturation can be adjusted individually.

Setting up the camera

If you want to use the video mode in the app, you first have to calibrate the camera with a screen. In our case, the screen was unfortunately a bit too narrow, which is why the alignment didn’t work perfectly. Before you can even start, you have to attach the included orange colored foam blocks. These are provided with small adhesive strips, which not only hold them well to the screen for setting up the camera, but can also be removed again without much effort.

Then, in the Govee Home app, under the “Device Settings” tab, you select the “Calibration” item. After that, you select whether you have attached the camera to the top or bottom of the screen with an adhesive strip. Last but not least, drag the dots displayed in the app onto the foam blocks and the camera is set up! 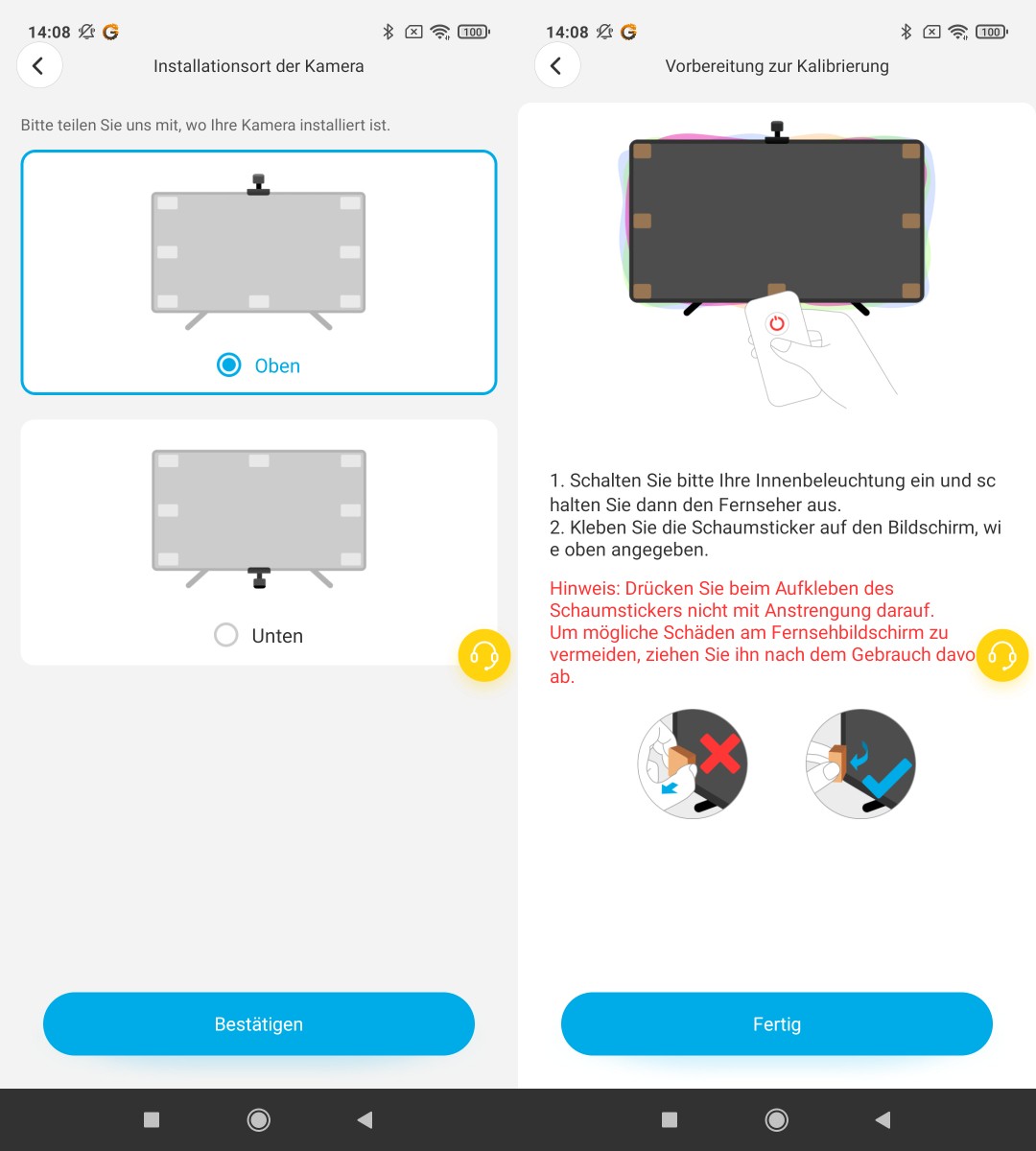 Govee Light Bars worth a buy?

In our short test with the video mode, i.e. the Ambilight effect, Govee’s light bars could convince us for the most part. Why only for the most part? The coordination between the screen and the Govee Light Bar was not always correct, i.e. too often only the strongest color was displayed, which meant that the transition to the light bar was slightly delayed when the picture changed. Then there is the point of criticism with the required camera for a WiFi connection. This could have been solved much better if Govee had integrated the WiFi module into the control box instead.

Despite the small criticism, we can recommend the Govee Light Bar because you can stage many things well with the light bars and create a nice atmosphere. The synchronization to the music or the ambient sounds also works flawlessly and there is definitely no lack of light effects. In the end, you have to know for yourself whether the permanently installed Ambilight from Govee is enough for you or whether you want to focus on something else occasionally with these versatile light bars.

Which type are you? Fixed Ambilight system or mobile light bars?