0 Kommentare May 15, 2022by Thorben
Hey, guys! Just a heads up: The linked offer is already a bit older and the price of the gadget might have changed or it might not be available anymore.

Philips already achieved a small stroke of genius years ago with the Ambilight series. The intelligent RGB color adjustment behind the TV creates atmosphere in the living room. The manufacturer Govee supplies a kind of Ambilight retrofit kit with the WiFi LED TV backlight, for those who do not want to reach for Philips. 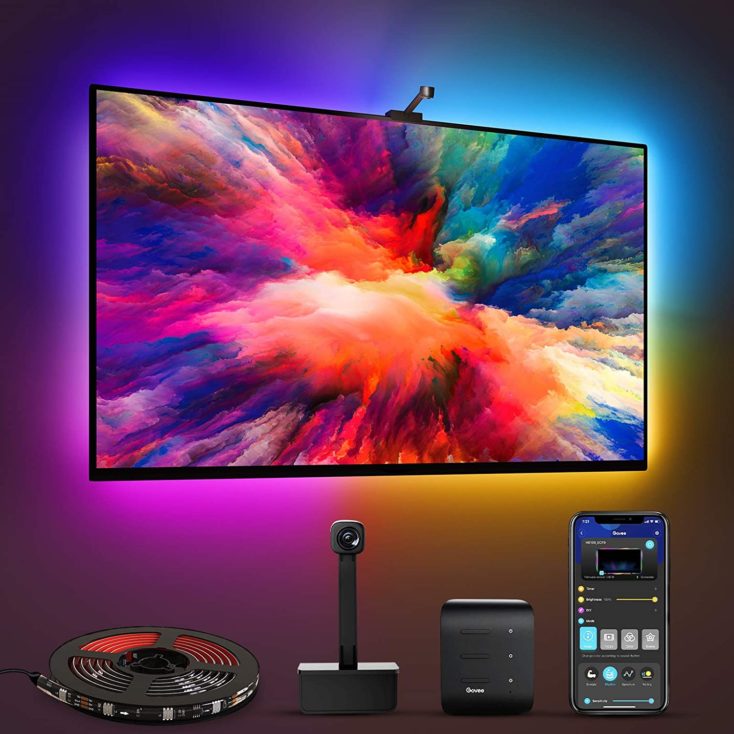 Philips itself also refers to Ambilight as “surround for the eyes” because the intelligent LEDs on the back create a mood that matches the picture content. This is not only supposed to simply look good, but also serves to relax the eyes, since the TV is thus no longer the only light source in the room.

In addition, it is supposed to improve the viewing experience. Philips has been offering this technology since 2004, but Ambilight wasn’t as smart back then as it is today. Ambilight doesn’t have to be expensive, but the technology is only reserved for Philips TVs.

The smart LED TV backlight from Govee also wants to offer this experience for other TVs, such as the Xiaomi Mi TV 4S. For this purpose, four LED strips are used directly, two with a length of 120 cm and two with a length of 70 cm for the short and long sides of the TV at home.

They are attached to the back of the TV with adhesive strips. The set is suitable for TVs from 55 to 65 inches. The LED strips display up to 16 million colors and offer an RGB light effect. 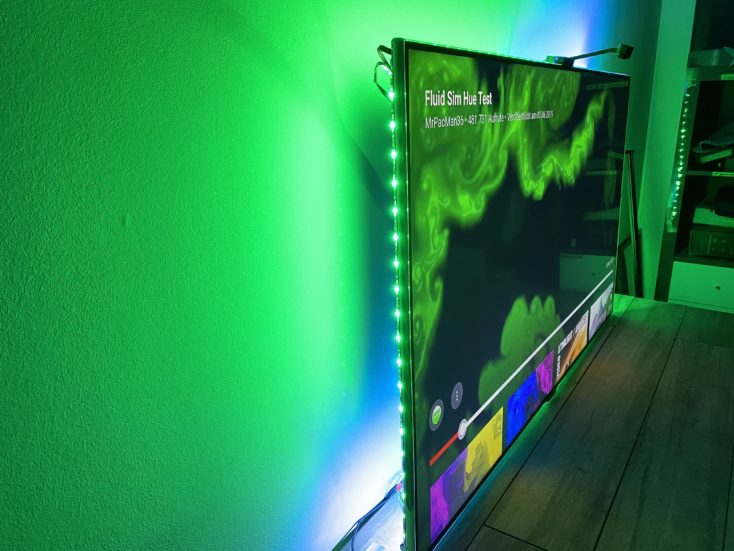 Since you can easily order the backlight from Govee on Amazon, you don’t really have to worry about damaged packaging and punctual delivery. The box is just about 7.8 x 7.8 inches, but it contains a lot. The box contains the LED strip, the power supply with EU plug, the control box, the camera, seven foam stickers for calibration, LED strip holders, user manual and service card. 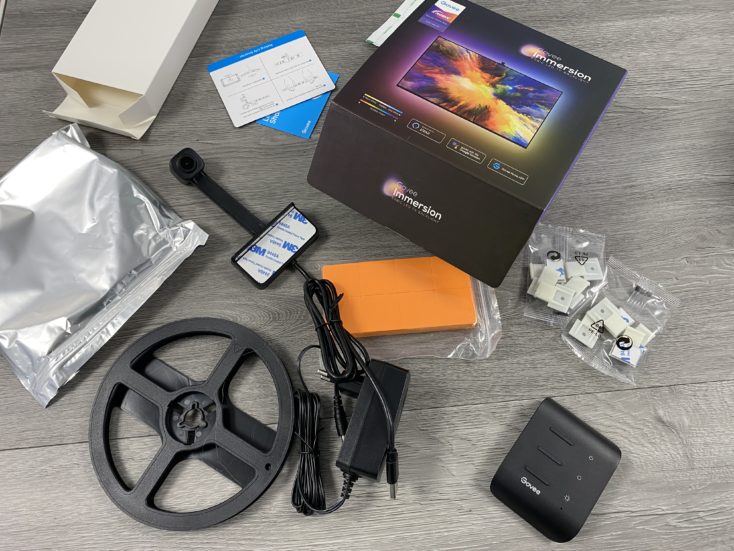 Assembly of the LED strip

The Govee WiFi LED TV backlight is actually designed for TVs with a diagonal between 55 and 65 inches, as described on the product page. We tried it out in the office with a 55″ LG TV and first had the impression that it was not a 55″ at all.

The LED strip really runs from corner to corner, there is no more air between, a few centimeters less would have done. Before attaching the LED strip with the self-adhesive 3M backing, you should clean the surface. 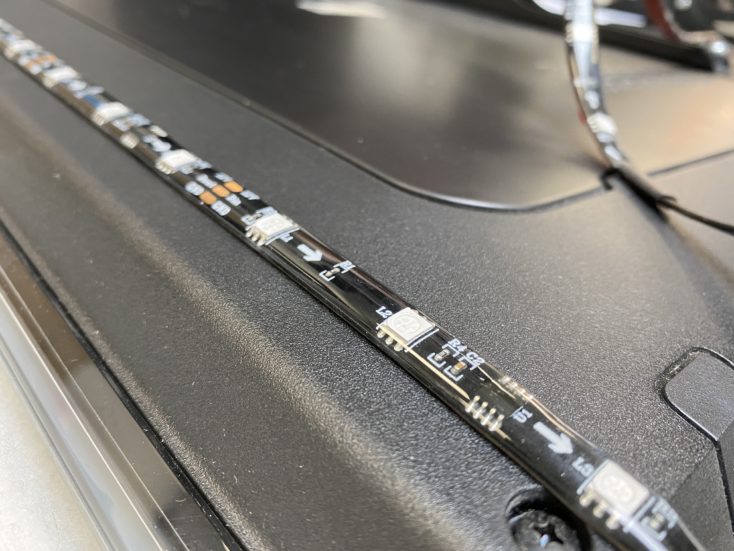 Then you can attach the LED strip and reinforce it with the included clips. I would have liked to have them for my Yeelight LED Strip 2 as well, to provide a bit more grip. You can then attach the camera to the top of the device, but the app also tells you afterwards that it can potentially be attached to the bottom edge as well.

Once you have centered the camera, the control box can be attached to the back via a self-adhesive 3M sticker and connected to the power, LED strip and camera. It uses a hollow plug, USB-C and USB-A for this. A small point of criticism: I find the power cable to be a bit too short, especially when you might have mounted the TV a bit higher on the wall. 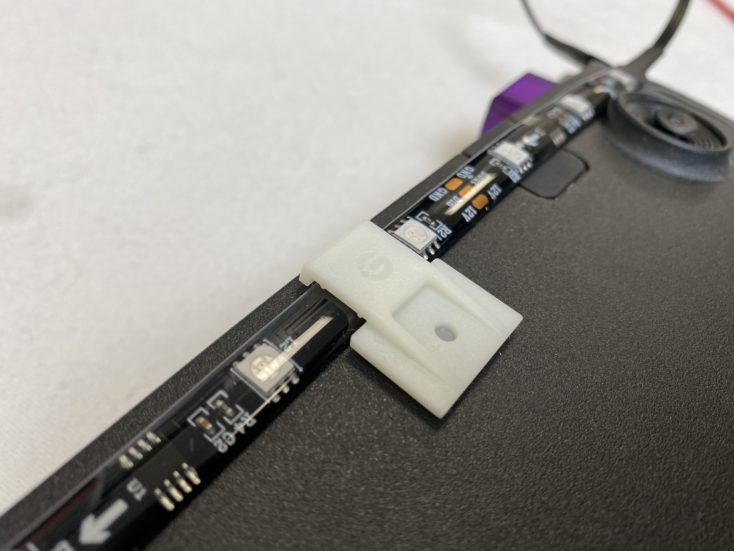 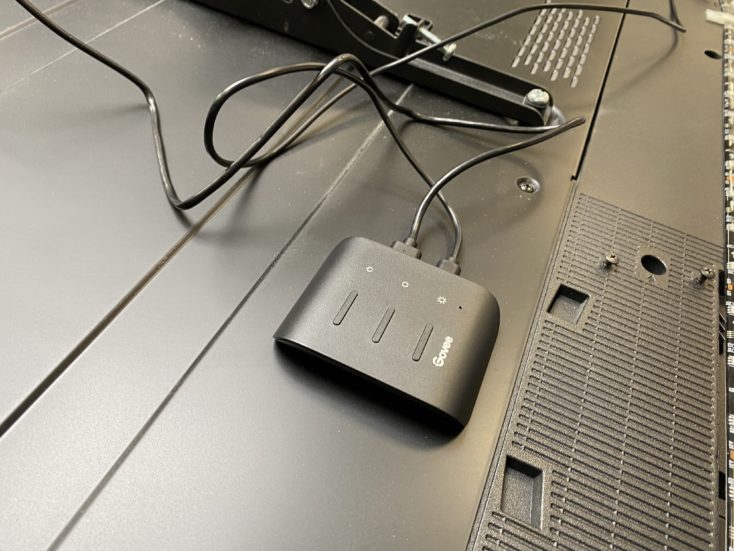 Calibration of the LED strip

However, in order for the picture content to be analyzed appropriately, you have to attach the included 1080p ColorSense camera to the top of the TV. It captures the colors on the screen and forwards them to the LED strips via the control box, which is also connected to the back.

Since the individual LED strips are equipped with an IC chip, different colors can also be displayed and you can control the LED strips in segments. To start, you have to calibrate the camera once 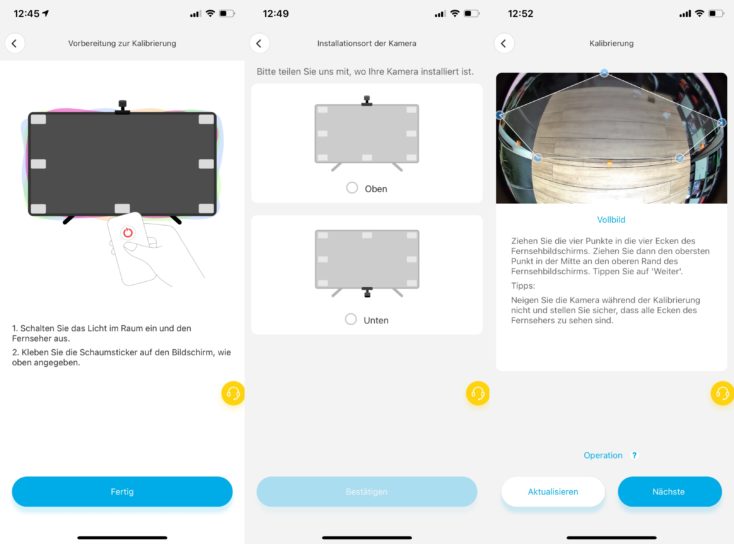 To do this, you need to attach the included seven foam stickers to the TV, four in the four corners and the remaining three in between, leaving the position of the camera free. Then you need the Govee Home app, which you can download for both Android and iOS.

Once in the app, click on the “+”, select “H6199” and follow the instructions. As known from other smart home devices, you also have to integrate the Ambilight retrofit kit into the home WLAN. 5 GHz is not supported, only 2.4 GHz. 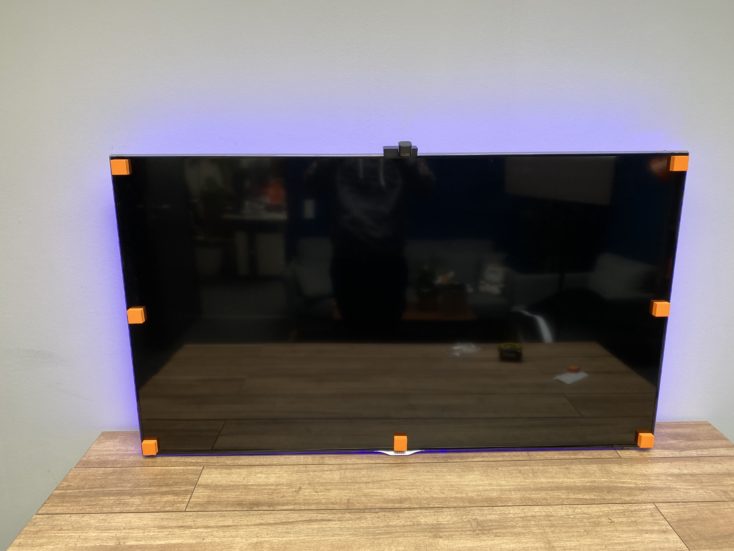 Then you have access to the camera, which acts like a kind of fish-eye lens. On it, you have to drag the four dots onto the foam stickers and follow the instructions in the app. After that, you can remove the stickers. Important: The app asks whether you have stuck the LED strip clockwise or counterclockwise on the back.

However, the app means the front view, whereas you also do it from the back, as in the instructions. So you have to rethink here. We initially calibrated the LED strip incorrectly.

The best way to check this is to search for an “Ambilight test” on YouTube. We used this one and were able to quickly determine whether we calibrated the Govee LED strip correctly.

At first glance, the Govee WiFi LED TV backlight does a good job. Especially the animations in the Ambilight test video on YouTube looked great. The LEDs really enhanced the effect, making it look more immersive and synchronous. The colors were also well reproduced, so we were very surprised at first. 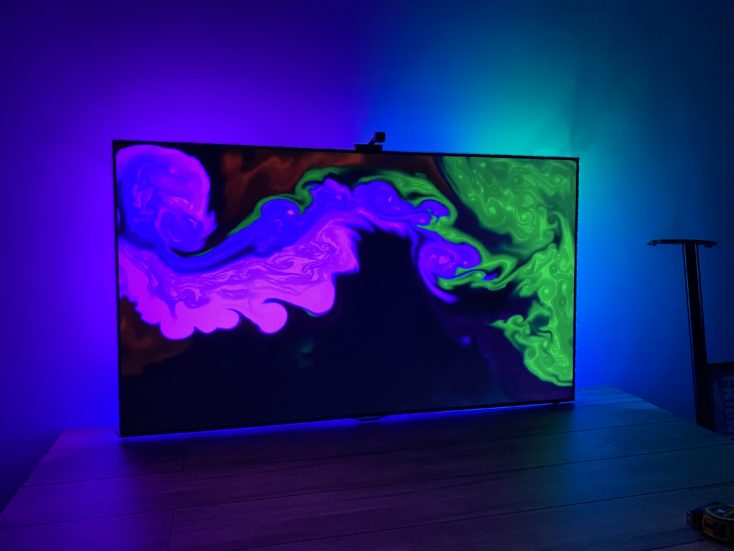 This then diminished a bit during real-life use in everyday use. However, we noticed two problems in particular, which can only be partially fixed. Problem number one is the delay. Since the retrofit kit, unlike the original, first has to record, analyze and convert the image content via the camera, the colors can be seen a bit delayed.

This works for slow movies or series with few scene changes, but for fast cuts like trailers, this accentuates the cuts and the RGB colors always lag a bit behind. 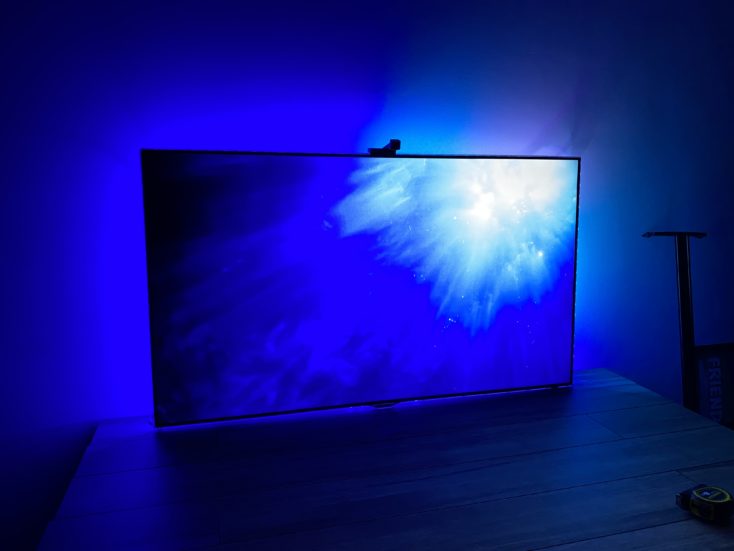 The second problem are the colors. Sometimes it enhances the colors on the TV very accurately, sometimes not at all. We just had the problem with magenta tones that are not visible on the screen at all. During a round of The Last of Us, a strong pink suddenly appeared, even though the entire scene was rather drab, gray, brown, and green.

We also read about this bug in the comments. You can at least fix this a bit by turning down the saturation in the app, which makes it a bit less noticeable.

In general, the LED kit often interprets white areas as blue, which fits in some situations, but often not. Even in different scenarios, such as YouTube, movie trailers or sitcoms on Netflix, we have not necessarily been able to discover a pattern. Sometimes the color selection seems a bit random.

It is possible that this also depends on the panel quality, brightness of the display or brightness in the room. If you have any experiences in this regard, please post them in the comments. 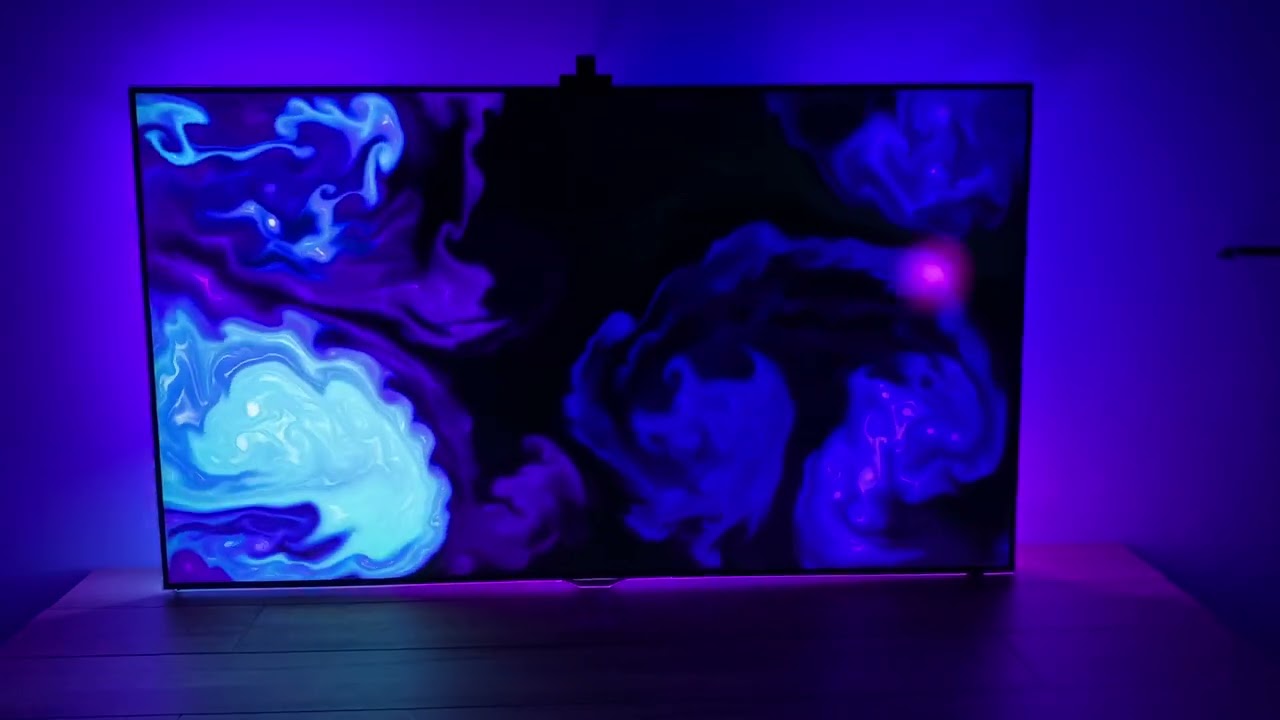 The Govee Home app is not only essential for the setup, but it also enables further settings and customization options once the LED TV backlight is connected to the 2.4 GHz network. You can activate music synchronization, choose from different scenes or set a timer. In addition, there is support for Google Assistant and Amazon Alexa. We also know this from the Yeelight LED Strip 1S. 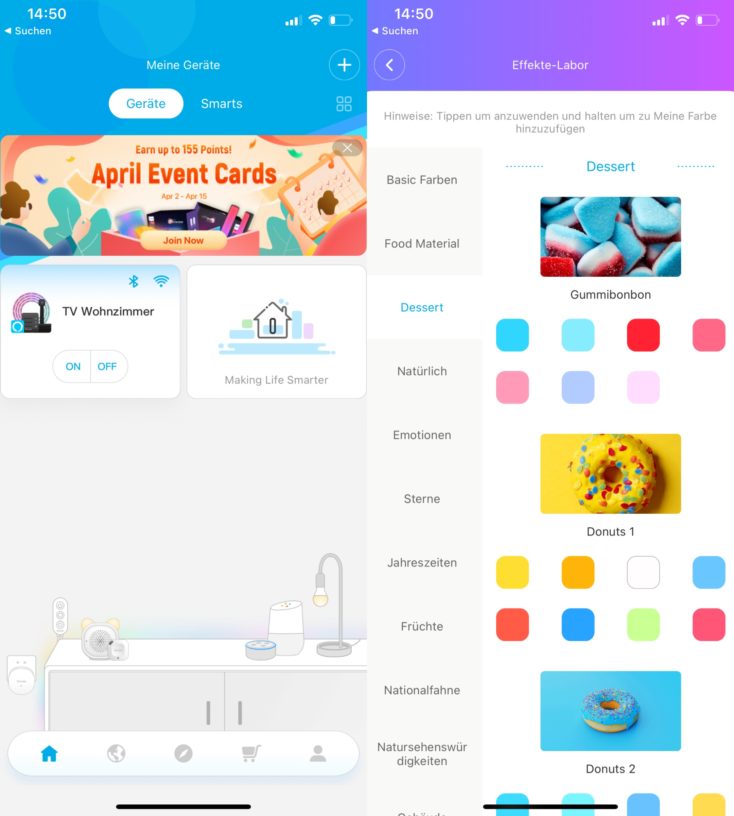 In general, Govee gives you a lot of room for adjustment in order to better adapt the LED strip to your individual setup. The light can be segmented. For example, you can also set that only left and right color should be displayed. If the automatic adjustment is too much, you can also opt for permanent lighting, for which Govee also provides many presets or scenes.

You can also use the Govee WiFi LED backlight as a conventional smart LED strip if you want to. 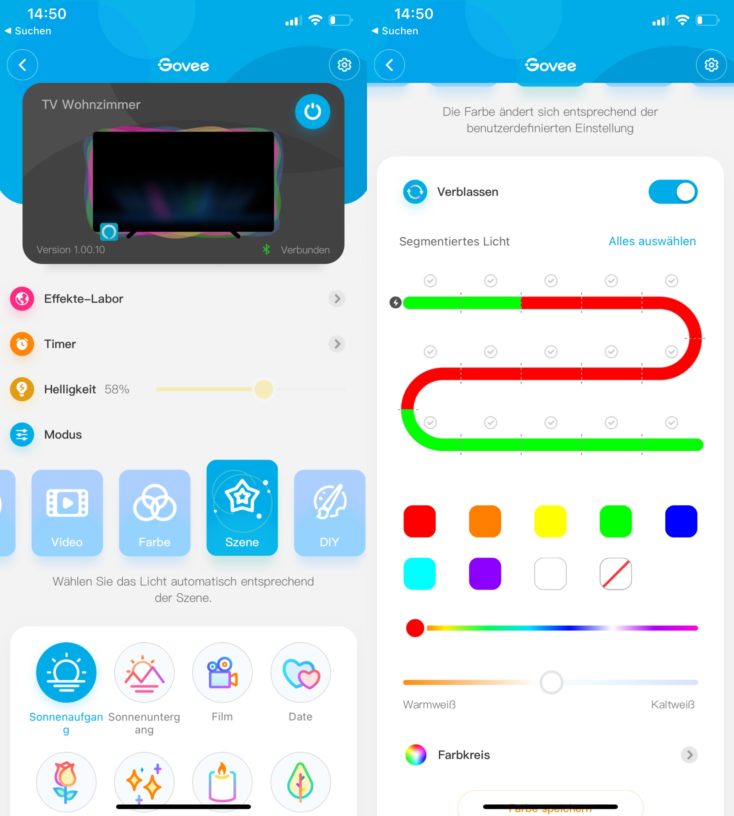 We got the recommendation from our friends from Nerdsheaven and did not want to withhold the tip from you. The Amazon reviews are mostly positive, although not everyone likes this retrofit kit.

After using the Govee WiFi LED TV backlight, I understand both camps, because as good as the whole idea, app and processing is, the implementation is mixed. Sometimes it looks really cool, sometimes the colors look random. For some situations, with a lot of contrast, the Govee LED kit can contribute a lot to the mood, but the strong magenta tones can also destroy other scenes.

What one thinks of it now certainly depends on one’s own expectations. A firm integration on the part of Philips is native and thus simply better. But not everyone wants to go straight for a new TV, which is why the Govee WiFi LED TV backlight is quite exciting. I think you have to think for yourself what you could do with it.

The “Ambilight function” is not good for every content. However, you can then also fall back on one of the other modes and in the worst case simply have a good, smart LED strip. You can get it from Yeelight aber einfach günstiger.

If you have any tips or experiences, feel free to post it in the comments.