1 Kommentare October 1, 2019by Alex
Hey, guys! Just a heads up: The linked offer is already a bit older and the price of the gadget might have changed or it might not be available anymore.

With the update 1.1.0.96 owners of the Global and International version finally have access to the blood oxygen measurement. Until now the feature was only activated for the China version. Furthermore the Honor Band 5 offers a music control, which also works with Spotify. So you can catch up even more to the Mi Band 4, which is only ahead in battery life and third party apps.

No other fitness tracker could tease the Xiaomi Mi Band 3 as much as the Honor Band 4 last year. Now there is the Honor Band 5, which is supposed to compete with the Mi Band 4. Has the Honor Band 5 finally managed to integrate a music control system and to reach the battery life of the Mi Band 4? Unfortunately no, because Band 5 is more of a Band 4.1 and offers hardly any new functions. Therefore I will only discuss the differences in the following, for a detailed report I refer to the test of the Honor Band 4. 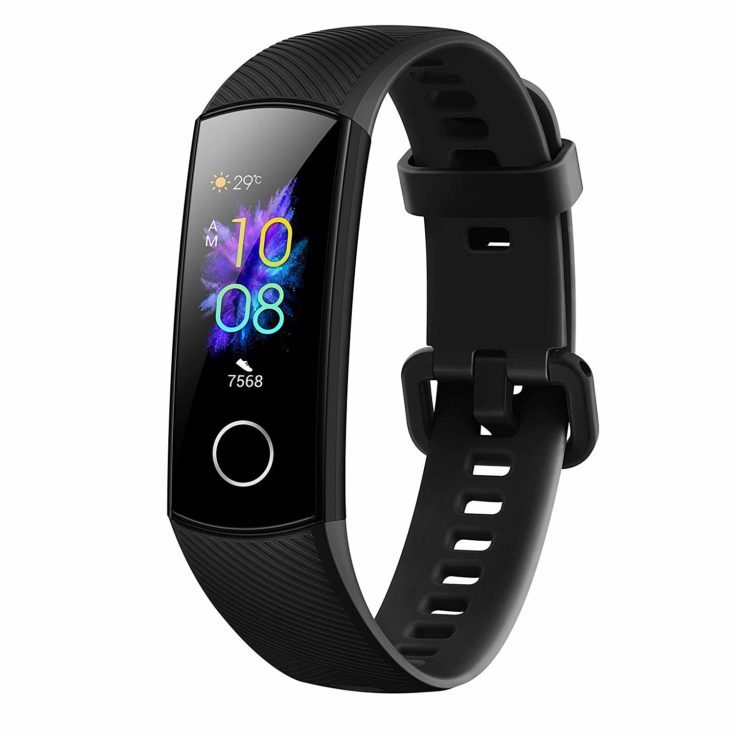 “Honor, stick to your guns” was probably the announcement of the tech giant from China. After all, there are only five real differences to the Honor Band 4, two of which are quite small. So now you have five brightness levels instead of the three in Band 4. But the maximum brightness is the same, you can only adjust it in smaller steps. Personally, level 4 is enough for me to be able to see everything well in everyday life. 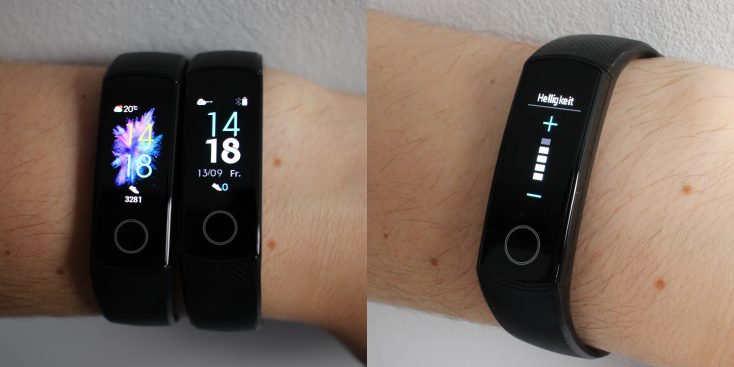 The pulse measurement can also be set differently. Here you have in the app the possibility between “In real time” and “Smart” measurement. With the real-time measurement the pulse is checked every 2 minutes. The smart variant decides how often the pulse is to be recorded depending on the current activity status. Here the rate fluctuates between every two minutes to only every ten minutes while sleeping. If you only sit at your desk, the rate is every 4-6 minutes. The smart mode is of course designed to save battery power and is a useful addition. In addition, you can now be warned at both a very high and a very low pulse.

The next change concerns the display again, the watchfaces to be exact. While the Honor Band 4 has only seven pre-installed dials on the tracker to choose from, the Honor Band 5 has a proud 50. These can be found in the Huawei Health App and can save 15 on the band itself, so you can always quickly switch between them. There are still no watchfaces of the community via third party apps like the Mi Band 4, but 50 is a step forward. 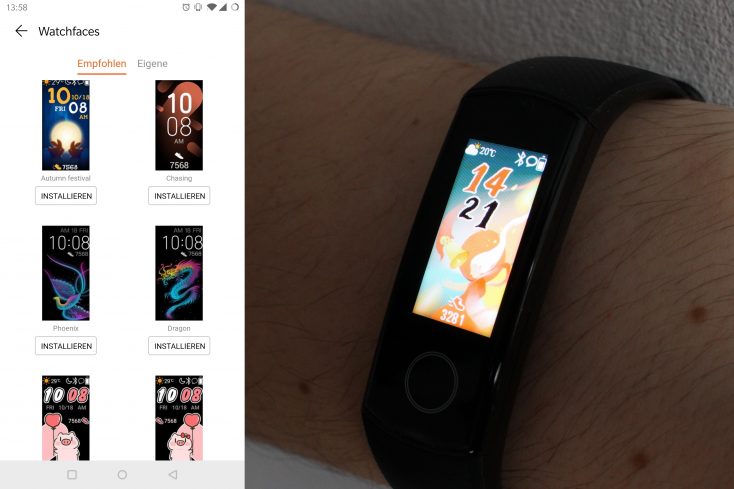 With a fitness tracker, of course, the improvement in sports tracking should not be missing. The Honor Band 5 offers three new sports modes: indoor walking, crosstrainer and rowing ergometer. From the Honor Band 4 are already known: Running (Outdoor/Indoor), Walking (Oudoor), Cycling (Indoor), Indoor swimming, Free Training. The Band 5 still doesn’t have GPS, of course, but that would also drive up size and price. If you need GPS tracking without a mobile phone, you should take a closer look at Honor Watch Magic. 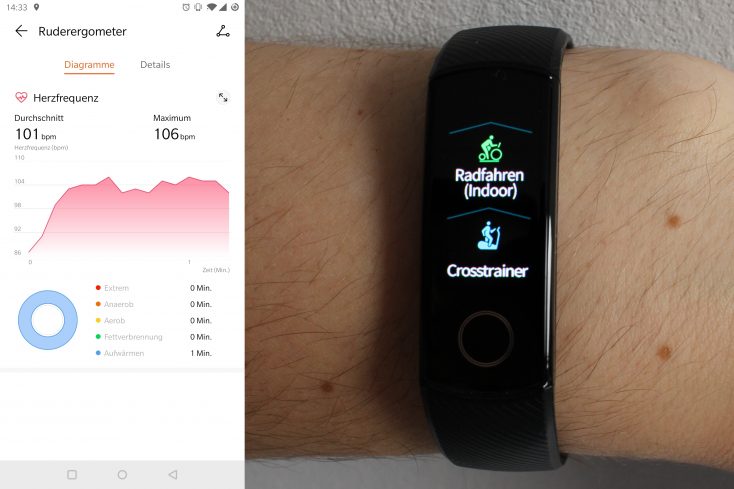 Last but not least, there is probably the biggest innovation, namely the possibility to measure the oxygen saturation of your blood. The method used here, called “pulse oximetry”, may already be known by some people from the measuring devices that are clamped to the finger. Unfortunately, we don’t have such a finger pulse oximeter at hand at the moment, which is why we can’t compare the values. After all, you can recognize the required red light and our values were between 95-100% depending on the person. 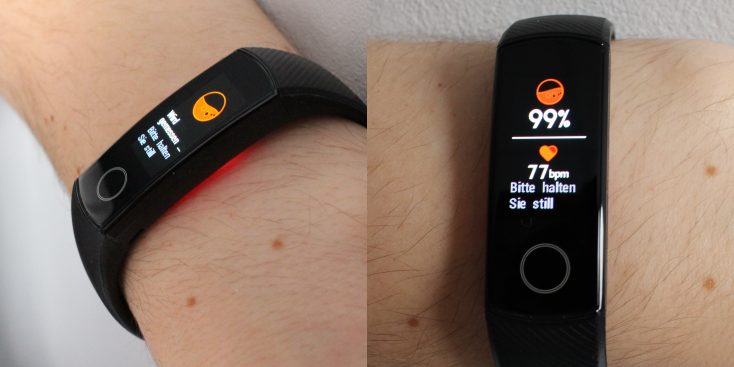 Actually the band is supposed to read information about fatigue and dizziness from this value. It should also be particularly practical for people suffering from hypoxemia (permanently low oxygen saturation). But you don’t get more than this percentage and you can’t find the values in the app. After all, since the update to version 1.1.0.96, the Global or International version also has this function. Before you needed the China version for the SpO2 measurement. 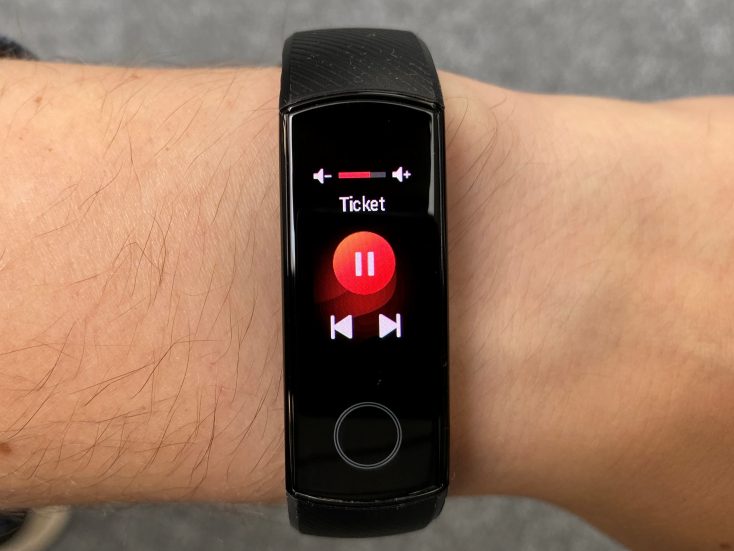 With this update came a new and very useful feature: the music control. This works exactly like the Mi Band 4, which means that the music app must be open already and then you can pause and resume from the band, jump back and forth between the tracks and change the volume. The title of the song is also displayed on the band.

These are all changes from Honor Band 5 to Honor Band 4. Everything else stays the same, including all advantages and disadvantages to Mi Band 4. The advantages are the flatter design (according to taste), the better sleep tracking and run tracking (without GPS), the according to user reports better swim tracking as well as the possibility to measure the oxygen saturation. The Mi Band 4 has a better battery life, more watchfaces and the many possibilities offered by third-party apps.

The current price is the same as the Mi Band 4, so the decision is up to you.