1 Kommentare April 30, 2020by Tim
Hey, guys! Just a heads up: The linked offer is already a bit older and the price of the gadget might have changed or it might not be available anymore.

Huawei‘s subsidiary Honor is probably also a common brand name for most people in this country. After Smartwatches, Laptops and the core business Smartphones, the first cordless vacuum cleaner is now to appear in the product range. For the equivalent of $183 (1299 Yuan) it is currently being financed through crowdfunding (only in China). 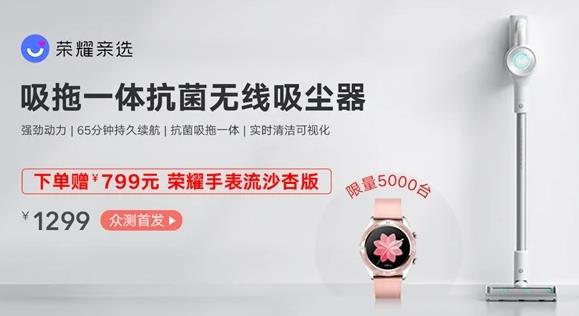 Too much technical data is not yet known about the first Honor vacuum cleaner. What we could read out so far, the device should be able to compete with the latest Dreame flagship, though.

What can the first Honor cordless vacuum cleaner do?

This year I had expected to see some battery vacuum cleaners from the robot manufacturers, but I did not expect this from a smartphone giant like Honor. Competition is known to stimulate business, so another player can’t hurt. The Honor’s motor works with 100,000 rotations per minute (comparison Dyson V11: 125,000), which is a basic requirement for good battery vacuum cleaners.

On paper, the suction power of 24,000 pa at the highest suction level is equivalent to that of the Dyson V11 and also the new Roborock H6. Ergo a strong value for a much cheaper model. But what might distinguish the Honor cordless vacuum cleaner from other models is the novel sterilization system. Floor roller, ion air channel, ion water tank and a filter are supposed to have an antibacterial function, which should free the floor from all kinds of bacteria and the like.

It is still unclear whether the vacuum cleaner will be able to wipe and vacuum at the same time. There are some indications of this, but no clarity yet. If you take a closer look, however, you can see a small tank on the floor nozzle in the few published pictures. It could well be a water tank like the one on the Roidmi NEX 2 Pro. But I don’t want to go too far out of the window here yet, but keep an eye on that and inform you here at this place as soon as more information is available.

Often we read your lack of understanding and your displeasure in the comments that big companies like HaierTab or like Honor here, only let their products be financed in crowdfunding, even though they have the necessary change for their own financing in their pockets. In fact, I share your lack of understanding, therefore only as an explanation, not as a defense of such practices:

Smaller companies need the money from crowdfunding to get a project done, larger companies don’t. Well-known manufacturers like Honor are interested in finding out how a new product will be received by potential buyers before an official launch. Which features they might want to see, so that they can be submitted before the launch if possible. And what could bother customers. Of course, this is pure calculation and a kind of market research on which everyone should form their own opinion.

When and if the cordless vacuum cleaner will be available in this country is still unclear.With an internationally active manufacturer like Honor, however, it will probably only be a question of time before it is available. But the launch price will probably be considerably higher than the crowdfunding price, estimated at $250.

What do you think: Is Honor a brand that you would buy your vacuum cleaner from?