0 Kommentare March 24, 2019by Tim
Hey, guys! Just a heads up: The linked offer is already a bit older and the price of the gadget might have changed or it might not be available anymore.

If you don’t want to switch to a cheap AirPod clone, the Honor FlyPods are the only real alternative of an established manufacturer. The true wireless stereo headphones of the Chinese manufacturer are, like the AirPods, half in-ear headphones. Find out how they compare to the original here! 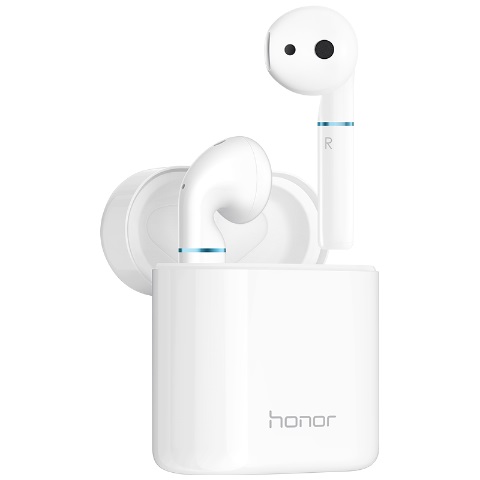 The Honor FlyPods, which we ordered from GearBest, arrived in a light blue package. The headphones themselves are pictured on the box, just like on the AirPod carton. In addition, the inscription in Chinese immediately shows that the headphones are not intended for the global market, but for the Chinese market. 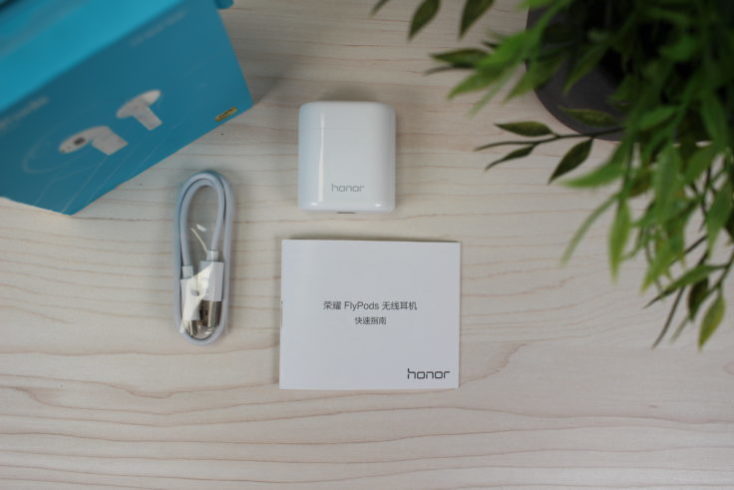 Inside the package you will find the handset itself, the corresponding charging box, a USB type C charging cable and a manual in Chinese and English. A global version is currently only available for the Honor FlyPods Lite in-ear headphones. The Honor FlyPods Half In-Ears, on the other hand, are only imported from China, presumably it will stay that way, at least one CE-mark is missing.

When designing the Honor FlyPods, the Chinese manufacturer has quite obviously oriented itself on Apple’s AirPods. The loading box with the dimensions of 50 x 45 x 24 mm is slightly bigger than the one of Apple and more angular, with a flat top and bottom.

Also the listeners, due to the “Half In-Ear Design”, like the Xiaomi Half In-Ear Headphones, inevitably remind of Apple. In terms of shape and size, the earcups themselves are almost identical to the AirPods. There are more differences in the area of the antenna and microphone. While this part of the Apple headphones is a round rod, the Honor FlyPods have an oval shape. 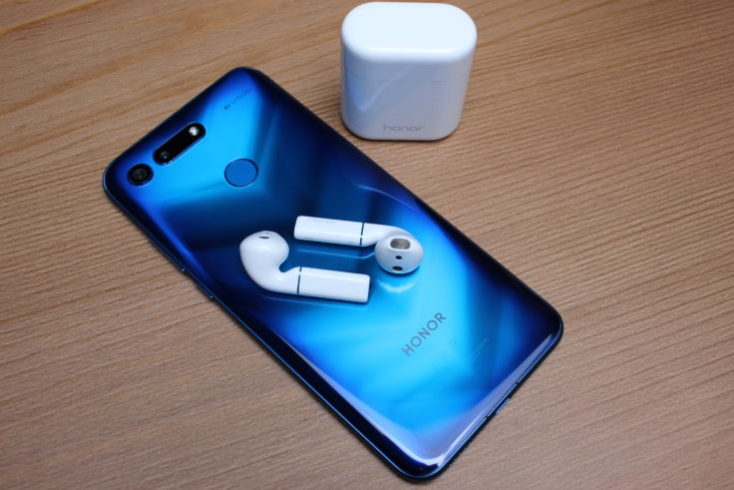 In the side view there is hardly any optical difference between the Apple AirPods and the Honor FlyPods. Seen from the front and back, they are much wider, I personally don’t like that much – but it’s a matter of taste. 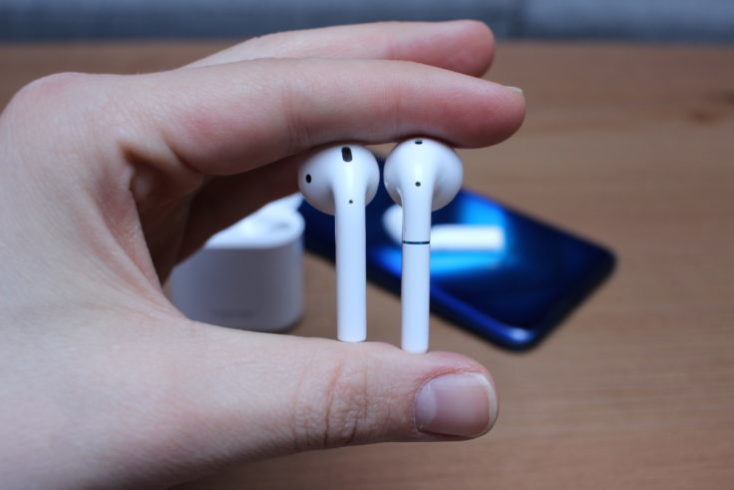 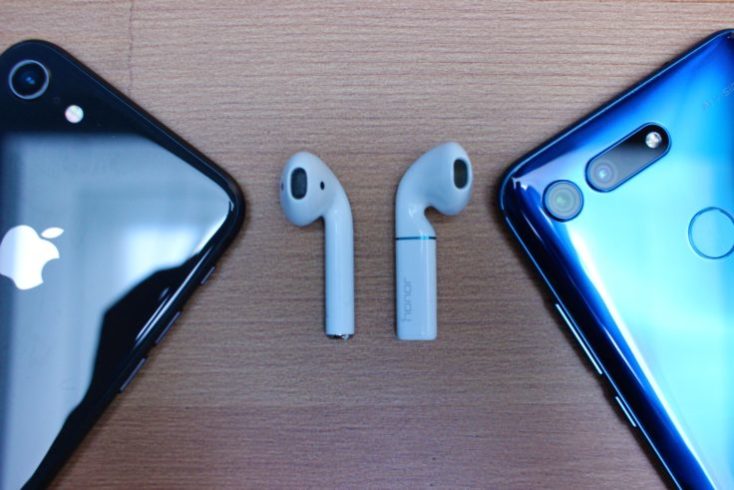 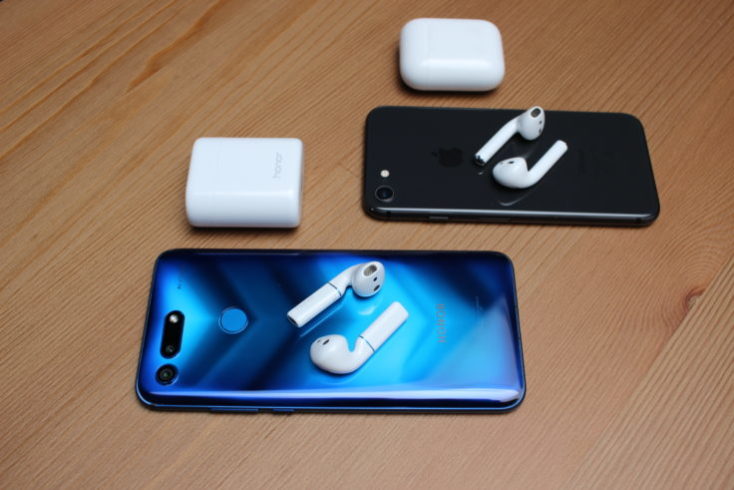 As usual from Honor, the FlyPods are very well processed. Compared to the original, the headphones feel no less valuable and there are no other processing or material defects. To make the headphones as light as possible, they are made entirely of high-quality plastic.

Sound of the Honor FlyPods: Better than AirPods?

Inside the Honor Flypods Wireless Half In-Ears a dynamic driver is built in. In the test I liked the overall sound quite well, the headphones convince with a powerful bass that is not too powerful in relation to the tweeter and midrange.

All in all, the FlyPods offer a round overall sound, which is not that far away from Apple’s AirPods. In a direct comparison, it is noticeable that the Honor FlyPods have a slightly more powerful low frequency, while the AirPods have a more differentiated high and mid frequencies.

In my opinion, the differences are too small to say that one headphone is better than the other. In the end it’s the personal taste that decides which headphones have the better sound profile.

This is where the spirits divide. If you follow our headphone tests closely, you will know that I am not a fan of Half In-Ear headphones or AirPods. In my ears they just don’t want to hold properly. In the test I passed the Honor FlyPods around the office. 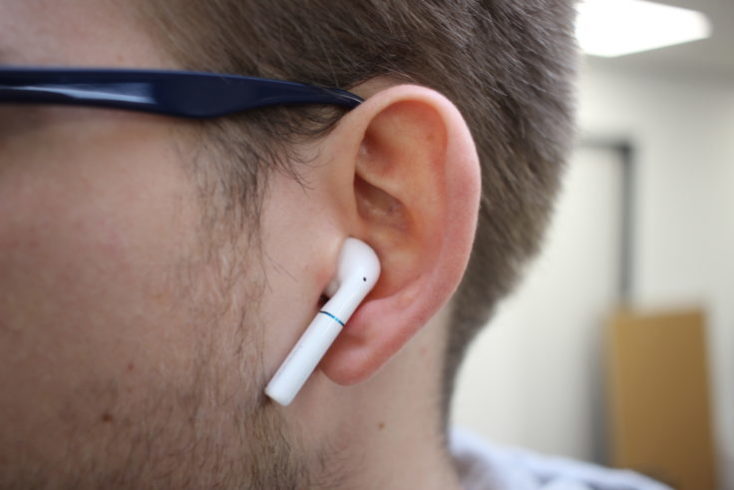 The result: All who don’t have any problems with EarPods or AirPods will also find the Honor FlyPods a good fit, sometimes even a bit better.

As with the AirPods, the Honor FlyPods microphones are located on the underside, between the charging contacts. So they are placed as close as possible to the mouth and do a solid job in practice. During the test phone calls, my conversation partners were able to understand me well overall. Even outdoors there were only a few disturbing noises, the FlyPods seem to filter them quite reliably.

So the headphones are also suitable as a headset for longer telephone calls – very good! Of course, the Half In-Ear functions as a stereo headset in this price range.

As with most current TWS in-ear headphones, the Honor FlyPods are equipped with two touch panels. Similar to the AirPods, these are located between two recesses on the back of the receiver.

In contrast to conventional buttons, these give no haptic feedback, on the other hand no pressure has to be applied to trigger a function. The “danger” that the listener slips in the ear simply by touching it is lower overall.

Why Honor only gives the FlyPods two functions is a mystery to me. Other headphones like the Meizu POP support much more functions. At least I didn’t have any problems in the test, both commands work reliably. 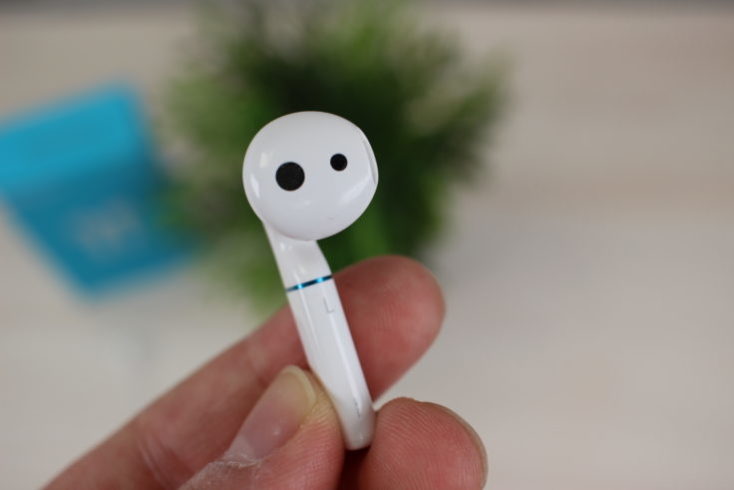 Like the Xiaomi Mi AirDots Pro, the Honor FlyPods are also equipped with proximity sensors. They detect when a listener is taken out of the ear and automatically pause the music. Unfortunately, playback does not resume automatically as soon as the listener is back in the ear.

FlyPods Pro App: only for the Asian region

At least in theory, there is also a smartphone app for the headphones. Unfortunately, this is reserved for the Chinese area. If you want to download it using the QR code on the packaging, you first have to install the AppGallery “Huaweis App Store”. Then you get the message in the AppGallery that the “FlyPods Pro App” is not available for our region.

Unfortunately, this underlines once again that the headphones are only intended for the Asian region. Users in Europe do not have the possibility to download software updates for the headphones or to use other functions of the app. In addition, if the app were to be installed via an .apk, it would of course be in Chinese.

The headset is equipped with the latest Bluetooth 5 standard. According to the manufacturer, the connection between smartphone and headphones should remain stable for a range of about 10 meters.

In the free area test, the Bluetooth connection remains stable at a distance of about 8-9 meters. In closed rooms it is correspondingly less, depending on how many obstacles have to be overcome. Overall, I’m satisfied with the range, it’s in the average range.

Pairing headphones and smartphones is a simple matter. Simply open the charging case and press and hold the function button on the back of the box for two seconds. The Honor FlyPods are then visible in the smartphone’s Bluetooth devices.

Each handset has a 25 mAh battery, which is quite a small capacity compared to the competition. In addition there is a 420 mAh battery in the charging box.

In the test the battery of the listener, at a volume of 50 – 70%, was sufficient for about two and a half to three hours of listening to music at a time. In the test, the battery of the charging box was again sufficient for six complete charges of the FlyPods handset, with a charging process lasting about 60 minutes. This results in a total runtime of about 18 hours of music enjoyment without the need for a power outlet.

In the test I liked the Honor FlyPods generally quite well, even though I am personally not a fan of Half In-Ears. As usual from Honor respectively Huawei, the FlyPods are basically a mature product.

Unfortunately the functional range and the communication between software and hardware, without Honor/Huawei smartphones with Chinese ROM and the FlyPods Pro app, is considerably reduced. So the quite high price is perhaps justified for the Chinese market, but in my opinion not for Europe.

Even though their sound is comparable to that of Apple AirPods, the limited usability and the almost below-average battery life are annoying. In my opinion, models like the Anker Soundcore Liberty Air or the Meizu POP offer the better overall package.

In theory many points of criticism could become obsolete by a global sale and a reasonable global software. But I dare to doubt that this will happen. Do you see the headphones as critically as I do, or would it be an option?