3 Kommentare November 25, 2020by Thorben
Hey, guys! Just a heads up: The linked offer is already a bit older and the price of the gadget might have changed or it might not be available anymore.

In addition to the Amazfit Bip-S and also the first own TWS headphones, Huami presented another new Smartwatch at CES: the Huami Amazfit T-Rex. This is a type of outdoor Smartwatch similar to the Casio G-Shock models. Was the outdoor trip a success? 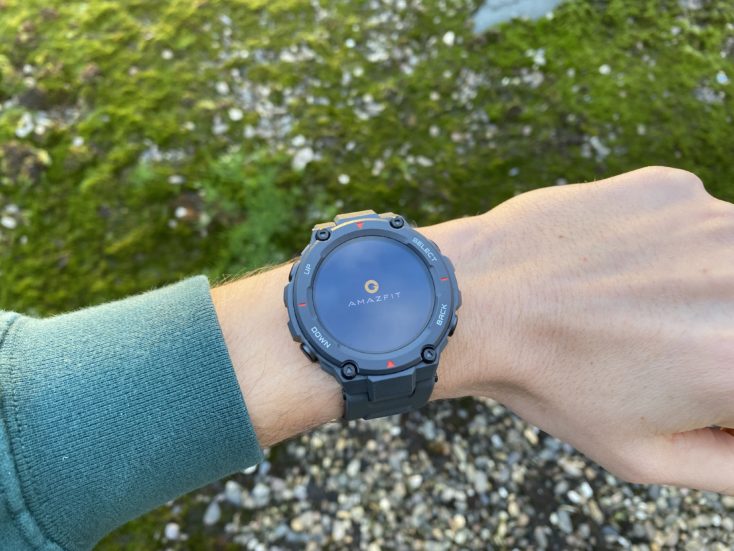 Technical data of the Amazfit T-Rex

At first glance, the Amazfit T-Rex looks very much like the G-Shock models, which also have a rugged design. The watch’s case frame looks very robust and is made of thick plastic. This is also emphasized by the thick, clearly visible screws around the bezel. The bezel is black or dark gray on all models except the gray version, the rest of the watch is in the corresponding Colorway. 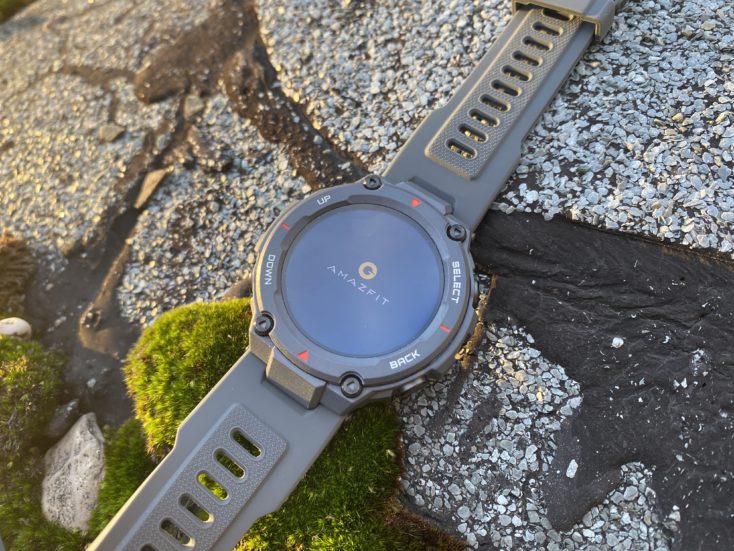 The heart rate monitor is located on the bottom side. The watch case is made of a combination of plastic and metal elements, the bracelet is made of silicone. This is not as easy to change as with other Amazfit watches, the manufacturer has decided to do without the thin pin and use a thicker one. We are not yet able to say whether a key is included to open the watch.

The watch is available in four different colors: black, gray, khaki and camouflage. We have been provided with the green version, which we like very much. Also the wearing comfort is good because of the high quality silicone strap, but the watch is still too clumsy for my wrists. With dimensions of 47.7 x 47.7 x 13.5 mm it is noticeably wider and thicker than my Amazfit GTS. This would be a personal reason for me not to wear this watch as my own.

With the Amazfit T-Rex the manufacturer has to perform a difficult balancing act: On the one hand, the watch should meet outdoor demands and be correspondingly robust, while on the other hand it should not be too heavy to ensure that it is comfortable to wear. In my opinion, this is exactly what has not quite been achieved. It does offer a pleasant wearing comfort, but only because it is very light for this look and does not feel quite as robust. A few grams more and/or a different material would have done the T-Rex good. 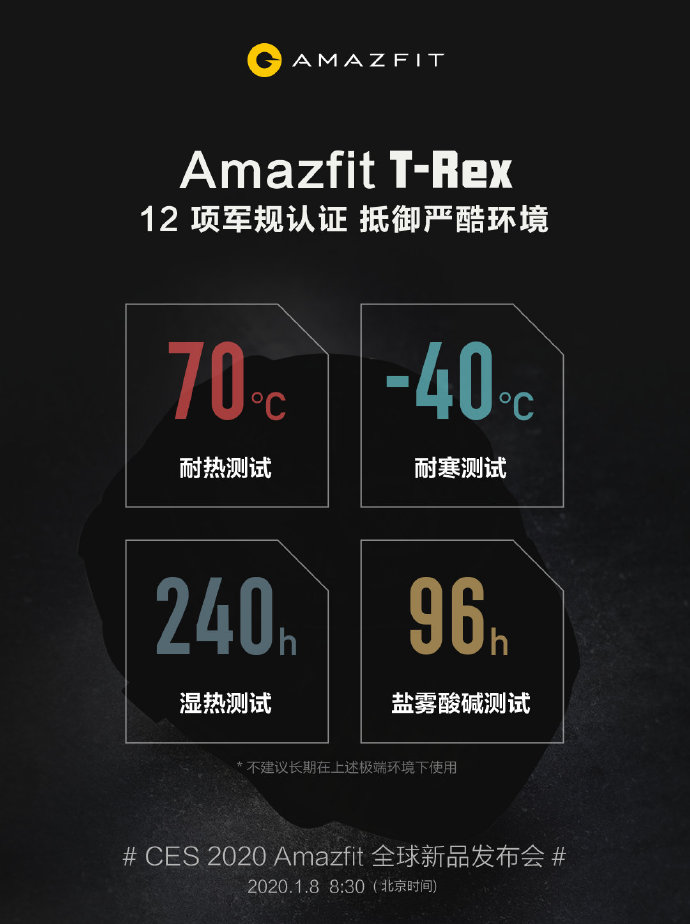 In fact, the Amazfit T-Rex directly conforms to twelve military certifications so that it can function even in extreme temperatures ranging from -40°C to 70°C. Of course, we could not test this in our temperate latitudes. However, it “only” complies with the ATM 5 classification. I showered with the watch every day, but swimming should not be a problem either. But we would have expected more from an outdoor watch. According to the ATM 20 classification you could also dive with it, the ATM 5 protection given here can also be found in a Mi Band 4 from Xiaomi. 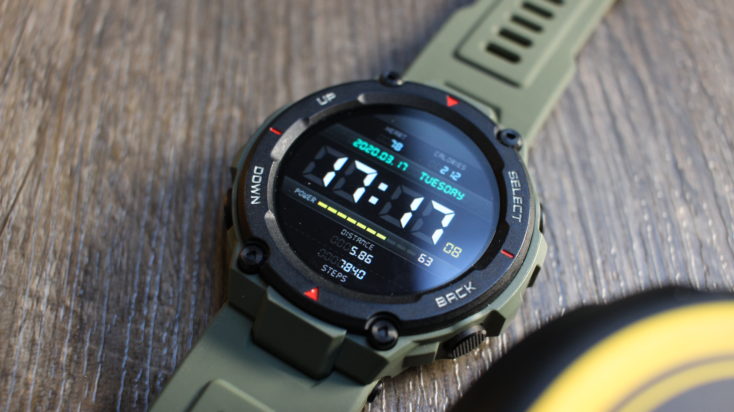 It remains true to the round watch design, making it very similar to the Amazfit GTR. Here, however, a 1.3″ AMOLED display is used, which is exactly between the two GTR versions. A 360 x 360 p resolution is used, which results in a sharp display. Since it is an AMOLED panel, the clock also supports an always-on display. You can choose between a digital or an “analog” display, these are independent from the selected Watchface. 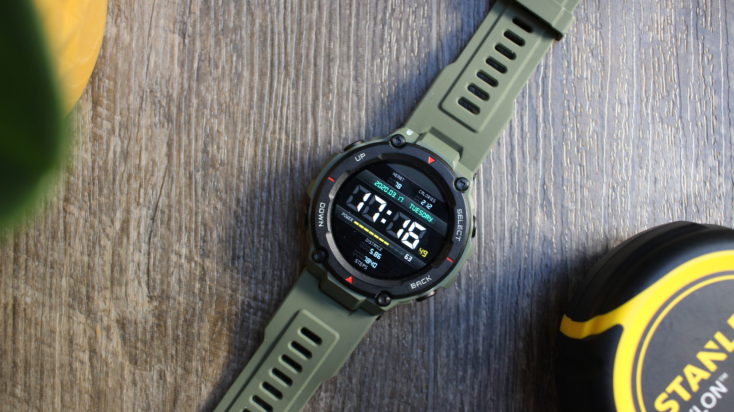 In a direct comparison with my Amazfit GTS, the T-Rex offers a somewhat darker and not quite as sharp display. Here the GTS currently has the pole position in the entire Amazfit portfolio. The brightness is infinitely variable and the automatic brightness adjustment can also be activated. On the other hand, there is nothing wrong with its functionality and speed of response. Inputs are quickly converted by the watch and the T-Rex can store two watchfaces that are synchronized via the app.

Of course, most of the operation is done via the touch screen, but the watch is also equipped with four function keys. And this seems to be the great unique selling point of the Amazfit T-Rex. There are two function keys each on the left and right; on the left there is an up and down navigation (“Up” & “Down”) and on the right there is a select button (“Select”) and a back button (“Back”). 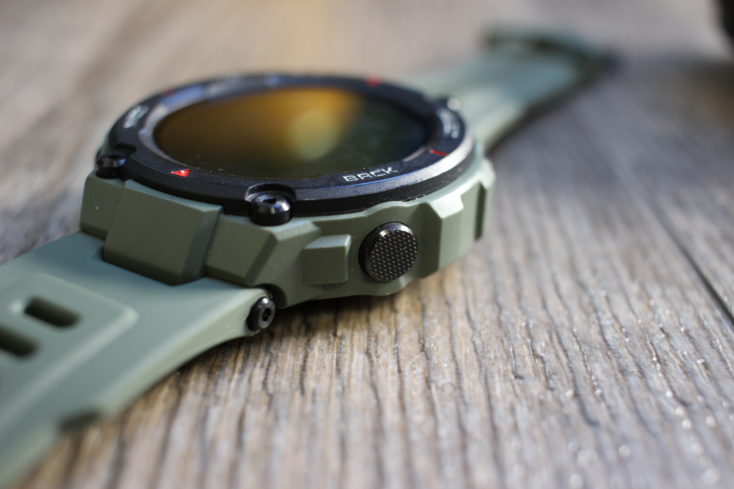 The navigation via Up and Down can be used from the Watchface to get to the Quick Menus. Here you have as usual a quick adjustment menu for brightness, screen lock, DND mode etc. and access to the heart rate monitor and pedometer. The navigation buttons can also be used for the menu and each individual menu item. This also allows you to scroll, which Amazfit has done very nicely. The selected items can then be confirmed with the Select key and the Back key is used to go back one menu item or back to the Watchface.

There is only one problem. You can only get into the menu one wipe to the left. This is not possible with any key. But the Select key would be a good choice, which at least offers a quick start option and is almost freely assignable for music, sports, notifications or other functions. Hopefully Amazfit will solve this with an update so that the quick start is activated by holding down the Select key for a longer period of time and a short click can be used for the menu.

In my opinion, it makes sense that the T-Rex in particular gets such a hardware navigation. Especially an “Outdoor-Smartwatch” might be used in a terrain where you wear gloves or are active. There, navigation via keys is much more helpful and faster. However, it took me a few days to get used to it and I still find the touchscreen navigation more intuitive in everyday life. But it’s nice that you simply have both options!

Like every Amazfit Smartwatch, Huami also installs an adapted operating system on the Amazfit T-Rex which does not allow the subsequent installation of apps. Pre-installed are typical functions such as notifications, weather display, alarm clock, timer, countdown, sleep tracking, reminders or a call reminder. There are also a total of 14 sports modes, four more than the new Amazfit Bip S. In addition to various jogging modes, cycling and swimming, triathlon, skiing, climbing and fitness are also worth mentioning. If you already own an Amazfit-Smartwatch and have read one of our various tests, you will not be surprised by the T-Rex. You can get over 90% of the range of functions in the GTS, GTR or Stratos. Small things that I noticed positively are for example the music control, which finally also offers a volume scale and can be controlled with the function keys (Next/Previous track). Furthermore, alarm clocks can be set directly on the clock. 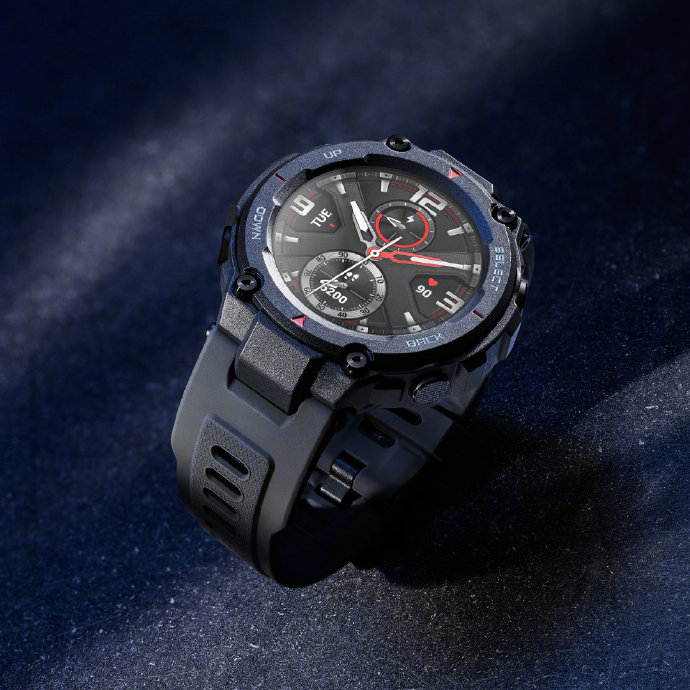 In addition, a BioTracker PPG heart rate monitor was integrated, which allows a permanent heart rate measurement, but of course can only measure when needed. For outdoor sports modes such as jogging, the Sony GPS chip is also interesting, which is combined with an additional positioning system. Amazfit has also probably worked on making the watch case more “GPS-friendly” so that a faster fix is now possible. 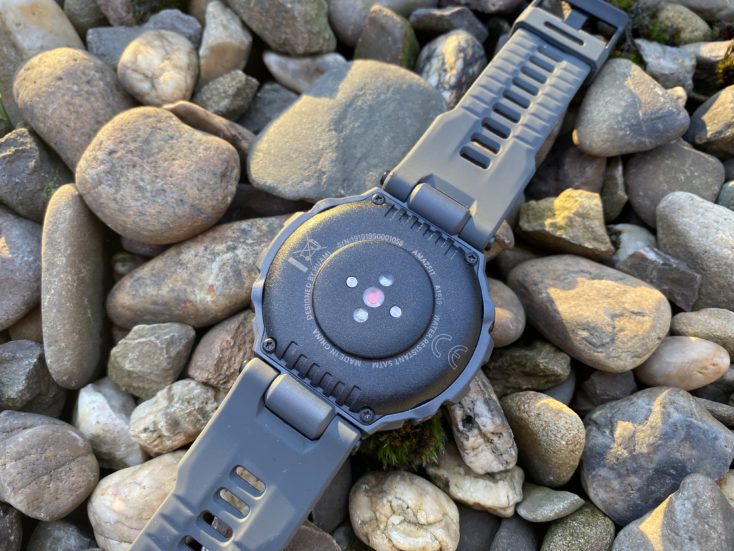 I can also confirm this, the first fix took me about 15 seconds, which was faster than with my Amazfit GTS. Unfortunately we were not able to do any sports in that short time and therefore could not make any statement about the accuracy of the GPS. But we will be happy to make up for that in the long-term test.

The manufacturer has integrated a 390 mAh battery which allows an average runtime of 20 days. The use for it is defined as follows: 150 notifications per day, 30 times with raise to wake function on the clock look, 5 minutes other use per day and 30 minutes jogging every two days. If you use the clock exclusively as a watch and cut many functions as well as the connection to the cell phone, then even 2 months of usage are included. As I said, we could only test the T-Rex for a few days and therefore cannot share any long-term experience on the battery life. However, I only used about 25 to 30% of the capacity in just over 5 days. Despite several updates, much experimentation, and different brightness levels, the drain, i.e. the battery consumption, is relatively low. The planned 20 days are probably no problem under certain circumstances, about 15 days should be the more realistic scenario. I think that this is the minimum period that can be expected above the Amazfit GTR.

After several outdoor smartphones, outdoor smart watches are now logically coming onto the market. After a few days of testing we can say that we had hoped for something more from the Amazfit T-Rex than an Amazfit GTR trimmed for outdoor use. But that is exactly what it is, in my opinion it is not a real outdoor Smartwatch. What is missing is a somewhat more robust design and better water protection.

BUT: The T-Rex is still pretty cool, but it is a lifestyle smart watch in outdoor look. If you like the design, you will have fun with the watch because of the super running time, the good display and the improved navigation. Furthermore the watch is in my opinion tuned to athletes who are active outdoors a lot. Therefore the additional buttons are worth their weight in gold. What do you think of the T-Rex and do you find outdoor smartwatches in general interesting?