0 Kommentare June 10, 2019by Tim
Hey, guys! Just a heads up: The linked offer is already a bit older and the price of the gadget might have changed or it might not be available anymore.

You want to switch from old headphones to ANC in-ears. But you still want to “oldschool” plug your headphones into your mobile phone? The Huawei ANC Earphones 3 can be the solution when it comes to sound and function. Check out our review to see if the Huawei ANC In-Ear meets these requirements. 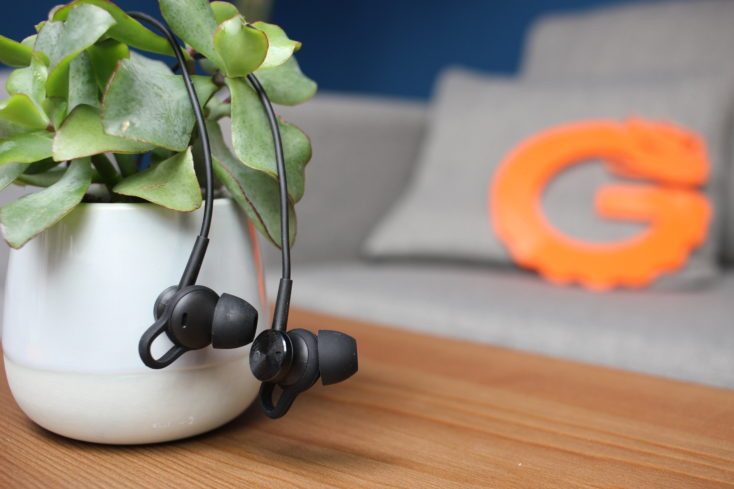 The box contains the headphones plus accessories, all of which together have a total weight of 175 grams. There are a total of 3 different ear pad sizes. There are also earhooks in four sizes to make the in-ears fit even better. A small clip is also included to attach the cable to your t-shirt, sweater, etc. The manual is completely in Chinese, so the in-ears are not meant for the global market.

Design and manufacturing of the Huawei ANC Earphones 3

The Huawei ANC Earphones 3 are simply black. They are made of aluminium. The cable is covered with rubber, which is normal for standard cable headphones. The headphones weigh 20 g, with a total cable length of 1.25 m, which is relatively light in comparison.

There is nothing wrong with the processing of the Huawei ANC Earphones 3, they are well processed and do not have too large gaps. Also the pressure points of the control panel are good and after the test it is no different, so worse.

Sound of the Huawei ANC Earphones 3

Huawei promises with a 13 mm driver with a “high performance diaphragm” that good highs, as well as natural midrange and deep bass fulfill the sound image.

The Huawei ANC Earphones 3 were able to confirm the specifications in the test. Overall, the sound is balanced and has a rich bass as well as nice clear trebles. Also the middle is very appealing and completes the sound, no matter which genre is heard, very harmonious.

In comparison, the Xiaomi ANC In-Ears are somewhat more empty in the overall sound. This is due to the not so concise bass. Unfortunately the in-ears can’t keep up with the Huawei ANC Earphones 3. In the tweeter and midrange range, however, they are roughly at the same level.

Finally, it can be said that the Huawei ANC Earphones 3 is more interesting for lovers of bass-oriented music, while the Xiaomi ANC In-Ear is a bit more muffled here, which doesn’t necessarily have to be bad.

Huawei advertises three ANC modes to make listening to music more enjoyable: Yes, the ANC works even at lower and (of course) higher volume levels. I’m not convinced by the three different modes. As you listen to music and turn on the ANC on the control panel, you notice a noticeable change in the way the outside noise is attenuated. But I don’t think the three modes, which indicate a different strength of the ANC, work.

The Xiaomi ANC In-Ears are just as good as the Huawei headphones when it comes to general attenuation. The only advantage of the Xiaomi headphones is that they have ANC, which they also fulfill, and not three different modes that you can’t tell apart.

The ANC must of course be powered by electricity. Here the battery of the mobile phone serves as power source. We have tested for you whether the use of the ANC has a massive effect on the battery while listening to music.

As the results show, the ANC does not massively affect battery performance. You can rest assured that the ANC is not a “battery guzzler” and that you can listen to music with your headphones with complete peace of mind.

The wearing comfort of the Huawei ANC Earphones 3 is very good. You never have the feeling that you might lose a headphone. This is due to the many different ear cushions and holders for the auricle. You can use them the way you really need them. Since the ears are not 100% the same, it makes the most sense to really try out all the possibilities so that you can find the right setting for your particular ear.

The operation of the Huawei ANC Earphones 3 is identical to that of any cable headphones with a control panel, with the exception of the ANC’s mode changes. The control panel is made of plastic and has four buttons. These buttons are used to turn the music up and down, as well as to pause and play it back. In addition, there is an ANC button to switch Active Noise Cancelling on and off.

Function of the buttons

The headset is at mouth level on the right side. When you make a call in a room, the person on the other side of the line clearly understands me. But the test also proved that the headset can hardly be used outdoors in windy conditions. The other person notices that I’m talking, but doesn’t understand me because of the noise from the wind.

I, on the other hand, can understand the other person just as well with the ANC function as in a closed room.

The Huawei ANC Earphones 3 have lived up to the manufacturer’s statements. The ANC works, apart from the three different modes.

In comparison with the Xiaomi ANC In-Ears, the Huawei ANC Earphones 3 convinced. The headphones have a similarly balanced sound, with the difference that they have a slightly stronger bass. Even if, in my opinion, they don’t look as good as the Xiaomi in-ears, they have an improved sound.

The price for the Huawei ANC Earphones 3 is fine for the performance and no reason not to buy these in-ear headphones.