Huawei FreeBuds 5i in-ear headphones from June 18 in China

0 Kommentare June 16, 2022by Tim
Hey, guys! Just a heads up: The linked offer is already a bit older and the price of the gadget might have changed or it might not be available anymore.

The Huawei FreeBuds 5i are the successor to the popular wireless in-ear headphones that we often recommend for making calls. Initially, the new in-ears will only be available on the Chinese market, but let’s take a look at what’s potentially in store for us. 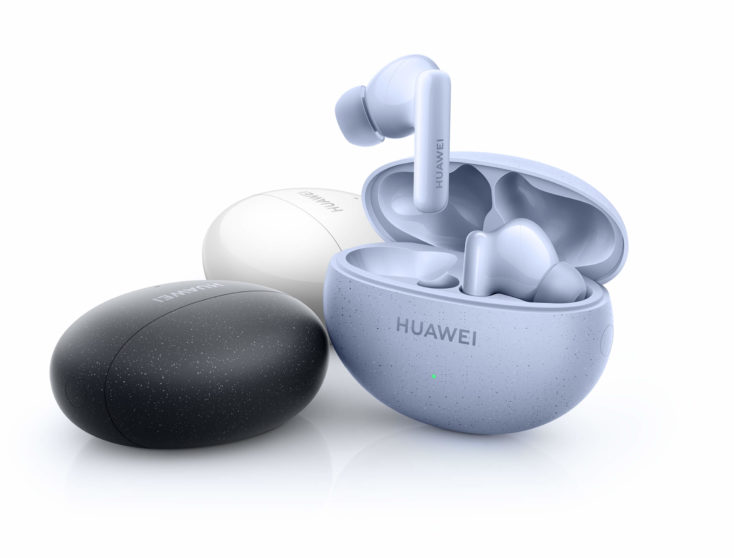 Huawei FreeBuds 5i modernize the design.

Visually, the new Huawei FreeBuds 5i are very similar to their predecessor. The shape of the charging case has practically not changed and also has very similar dimensions of 48.2 x 61.8 x 26.9 mm. The earpieces have also changed very little when you look at the product photos. However, with dimensions of 30.9 x 23.9 x 21.7 mm, the dimensions have also become a bit more compact here. Above all, the earpiece rods are apparently shorter now, which I like and is absolutely contemporary and necessary. 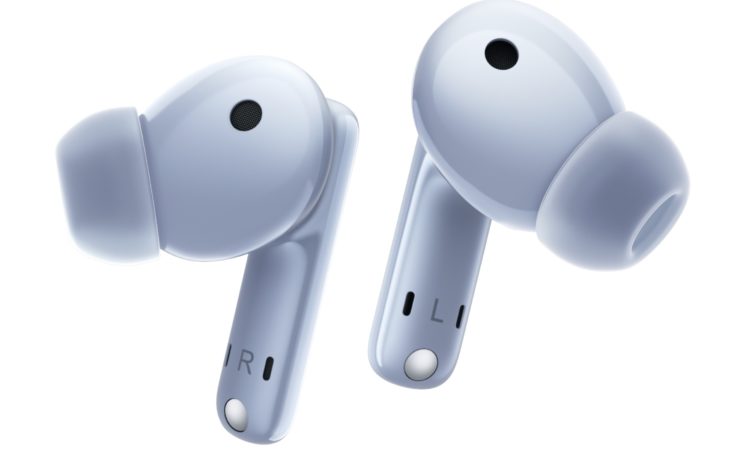 Besides the adjusted dimensions, the weight of the Huawei FreeBuds 5i has also changed. The headphones now weigh only 4.6 grams per earpiece, a generally average value, but about one gram lighter compared with the predecessor. The charging box has also lost some weight and now only weighs 33.9 g instead of 36.5 g before.

The FreeBuds 4i was only available in black and white. Only the white version with piano finish remains. The black version looks more like anthracite with a pebble look, at least in the product photos, and there is also a blue version. I actually like it quite a bit and it reminds me of the Sony WF-1000XM4, at least in the beige version.

Another new feature is that the Huawei FreeBuds 5i are (finally) also certified with an IP rating. With IPX4, they are protected against splashing water from all directions. Of course, this is not the best rating, but it is sufficient for sports, for example in the gym or for running.

Furthermore, the Huawei FreeBuds 5i are equipped with a 10 mm dynamic driver, like its predecessor. Although the driver diaphragm is quite large for an in-ear headphone here, the sound of the predecessor was surprisingly balanced and not too bass-heavy. I would like to see Huawei keep this sound tuning, because there are really more than enough bass-heavy headphones on the market. Balanced headphones, which are better suited for some music genres in my opinion, are rare on the other hand. 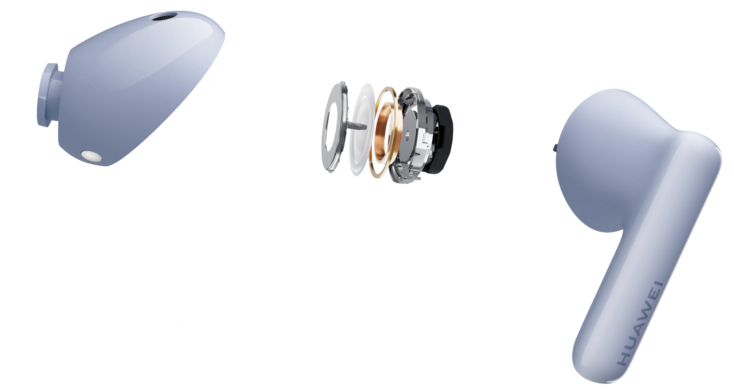 According to Huawei, the ANC of the mid-range model has been improved significantly. Instead of 22 dB noise reduction before, it is now said to have up to 42 dB noise reduction. This is a value that is often found in flagship in-ears, so I am curious to see how the ANC performs in practice.

Microphones are installed in the in-ears for active noise cancellation as well as for making phone calls. The voice quality during calls is what particularly distinguishes the Huawei FreeBuds 4i for me. In this context, we often recommended the headphones as the “best, cheapest headphones for making calls” last year. I hope I can say the same about the Huawei FreeBuds 5i in the future. After all, they again advertise AI microphones that are supposed to filter background noise precisely.

The Bluetooth 5.2 module responsible for communication offers some features that I still missed in the Huawei FreeBuds 4i. For example, the Huawei FreeBuds 5i are the first Huawei headphones that support Sony’s LDAC codec and are also Hi-Res Audio wireless certified. In addition, there is now also multipoint connection, which means that the headphones can be connected to two devices at the same time. 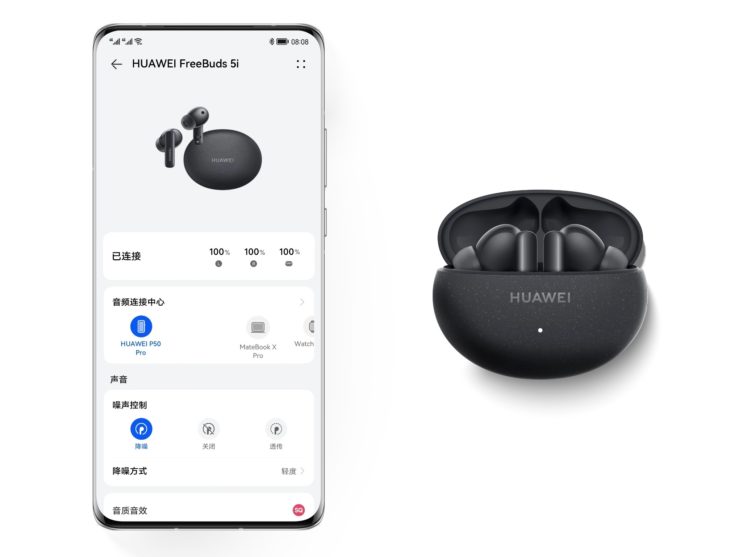 As with the FreeBuds 4i, there is also app integration and system integration for Huawei phones with HarmonyOS 2 and EMUI 11 or higher. A gaming or low-latency mode is also on board, which reduces the data transfer speed to 94 ms.

Despite the lower weight, the battery capacity of the Huawei FreeBuds 5i remains the same. Furthermore, 55 mAh batteries are installed in the earpieces and a 410 mAh battery in the charging box. According to the manufacturer, the runtime should be about 6 hours with ANC turned on, and up to 18.5 hours with the charging box before a power outlet is needed. Without ANC, Huawei states a value of 7.5 hours or 28 hours with the charging box. Compared with the FreeBuds 4i, the battery capacity has decreased a bit according to the manufacturer, but it is still very solid.

Furthermore, the FreeBuds 5i also supports a fast charging function, so up to 4 hours of listening to music (without ANC) should be possible with only 15 minutes of charging time. Speaking of charging, this is of course done via USB-C, wireless charging is not mentioned, so it is probably not supported.

It’s actually super trivial, but I’m very happy to see that the Huawei FreeBuds 5i retain the design of their predecessor aside from slight changes, such as the wand length. With the clutter that Xiaomi has going on, it’s a nice change. I do like the new colors with the rather innovative pebble pattern.

Technically, the FreeBuds 5i have been upgraded even more than visually – very appealing! I am very curious about the ANC and whether Huawei sets new standards for the mid-range here. In addition, I am looking forward to the LDAC codec support, the IP rating is also important and correct, but comes a generation too late in my opinion.

If the old strengths of the Huawei FreeBuds 4i are maintained, namely the neutral sound and a good microphone quality, we should have a worthy successor here. The headphones are priced at around 85 Euros (~$85). The FreeBuds 4i have an OVP of 74.99€, but are now actually permanently available for around 50€. Let’s hope that the OVP stays below the 100€ mark for a possible European launch.