0 Kommentare April 1, 2020by Thorben
Hey, guys! Just a heads up: The linked offer is already a bit older and the price of the gadget might have changed or it might not be available anymore.

The Huawei P series is the manufacturer’s actual flagship series and is most likely to be intended for the general public. Now the new Huawei P40, Huawei P40 Pro and Huawei P40 Pro+ have been presented in an online event. As with the predecessors, the camera is clearly in the foreground, but these Huawei smartphones also have to make do without Google services. Flat or curved: spoilt for choice

Samsung seems to have pushed the trend last year, Xiaomi also bets on it with the Mi 10 and the Huawei P40 Lite variant we already tested swears by it: the punch-hole design. Although the normal Huawei P40 and P40 Pro differ in form factor, both rely on a dual-punch-hole front camera in the upper left corner of the screen. This detail of the picture also reminds us of Xiaomi’s Redmi K30, for example. The Pro version, however, still uses this space for an infrared sensor in order to enable a more secure face unlock.

The normal version focuses on a more compact design, the 6.1 inch diagonal was already available last year. This is an OLED panel with 2340 x 1080 pixel resolution.

The Pro variant again relies on a curved display, but this time on all four sides of the screen. This is called a “Quad-Curve Overflow Display”. In addition, the screen diagonal of 6.58″ is larger than on the P40 and than on its predecessor, the P30 Pro. The fact that the actual flagship is at hand here can be seen in the OLED’s somewhat higher 2640 x 1200 p resolution and the 90 Hz refresh rate. Thus, you can draw level with the Samsung Galaxy S20 (+).

The back also reminds of Samsung. Both smartphones have a large camera module in the upper left corner, which strongly reminds one of the Samsung Galaxy S20 Ultra. The Huawei lettering runs vertically and sits in the left corner. The P40 and P40 Pro are both available in five colours: Black, Deep-Sea Blue, Blush-Gold, Silver-Frost and Ice-White. The back should be matt and repel fingerprints.

The Plus variant is available in two colors and the back is made of ceramic. Here you are very classic with black and white.

It was no surprise that both smartphones work with the current HiSilicon Kirin 990 processor. The in-house CPU clocks with up to 2.86 GHz, is perfectly suited for all requirements and is also found in the Huawei Mate 30 Pro. The normal P40 gets 8 GB RAM and 128 GB UFS 3.0 memory, which can be expanded using the Huaweis Nano-Memory Card. The P40 Pro has an additional vapor-chamber cooling and it is even available with up to 256 GB UFS 3.0 memory. This can also be expanded here.

Huawei appears a bit conservative with the batteries. The small P40 “only” gets a 3.800 mAh battery, which can also be quickly charged “only” with 22.5W. This is surprising, as the Huawei P40 Lite is equipped with a larger battery and 40W fast charging. After all, the Pro version gets a 4,200 mAh, which can be charged with 40W via cable and with 27W wireless.

The Huawei P40 Pro Plus even offers the possibility to charge it with 40W wireless, which will push the Xiaomi Mi 10 from its throne. That’s another 10W more than the Xiaomi, and it should fully charge the phone in about 40 minutes.

In theory, both versions of the P40 series are equipped with a triple camera. However, the P40 Pro also gets a ToF sensor (Time of Flight). Both the P40 and the P40 Pro use the new Sony IMX700 UltraVision sensor with a resolution of 50 MP and an aperture of ƒ/1.9 including optical image stabilization as the main sensor. Pixel binning technology is also used here to combine four pixels into one. This allows more light to enter each pixel and keeps the file size in check. Furthermore, the XD Fusion Engine software is used for image processing.

Of course, the manufacturer wants to convince even more with the Pro version. The ultra wide-angle camera with 18 mm focal length even offers a resolution of 40 megapixels thanks to the CineLens, which was also already used in the Mate 30 Pro. The periscope telecamera offers a 5x optical zoom and up to 50x digital zoom with a resolution of 12 megapixels. 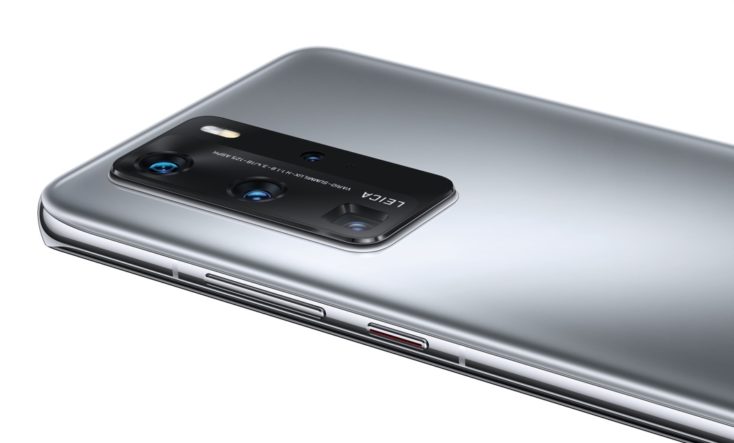 On the front is a 32 megapixel front camera that supports bokeh mode and even 4K video recording.

With the Huawei P40 Pro Plus, you go one step further and implement a penta camera, as in the Mi Note 10: the main and ultra-wide angle cameras are identical to the P40 Pro. The periscope camera in the P40 Pro Plus even offers a 10x optical zoom with 20x hybrid zoom and 100x digital zoom with 8 megapixel resolution. The second telephoto camera comes from the normal P40 and offers 8 megapixels and a 3x optical zoom.

With the new Huawei flagships, there is no need to worry about connectivity. WiFi 6, Bluetooth 5.1, NFC, LTE and even 5G support are on board. Of course, there is a USB type-C slot on the bottom. The SIM slot offers either space for two nano SIM cards or one nano SIM and one nano memory card for memory expansion.

All devices of the P40 series come of course with pre-installed Android 10, on which the Chinese put their latest EMUI interface. However, it gets by completely without Google services: it is an HMS smartphone. That stands for Huawei Mobile Services. Due to the trade dispute between Huawei and the USA, the American Google services are missing, the Android operating system is open source. Huawei now relies on the Huawei App Gallery, as it did with the P40 Lite, where at least some well-known services and apps are already represented.

Huawei of course tries to make the best of the situation and is currently introducing an extremely promising flagship smartphone, the Huawei P40 Pro. Of course, we’re just curious about the camera, the new main sensor and the other camera features sound as if we’re back in the top position among smartphone manufacturers.

But Huawei is of course asking a lot of money for this, but in contrast to last year, it hasn’t become more expensive. The cheaper P40 starts for a price of around $820 and the Huawei P40 Pro for $1010. However, the Huawei P40 Pro will probably not be released until June, an exact date is not yet available.