0 Kommentare May 15, 2021by Jens
Hey, guys! Just a heads up: The linked offer is already a bit older and the price of the gadget might have changed or it might not be available anymore.

Mini drones are the trend. Not “small” drones, the trend has been going on for years, but “mini versions” of larger drones in the style of the DJI Mavic Mini, which is likely to have been the model for most of the models. Most recently, Fimi joined the fray with the X8 Mini. Now Hubsan is also launching a new drone, which is just as creatively named Hubsan Zino Mini Pro. 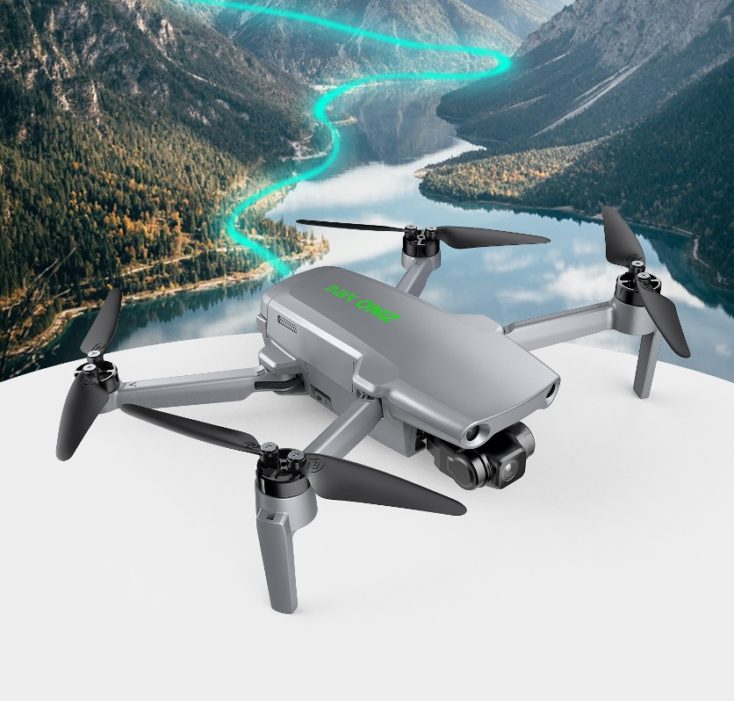 You could now describe the drone’s design in detail. You can also make it short and say: The Zino Mini looks like the DJI Mavic, only in small. That this copying annoys me quite a bit, I have already explained quite a few times. It may be that this has aerodynamic reasons and this shape is simply the best. But I don’t think so.

Of course, this is not a dealbreaker and all drones are similar somewhere. But this time even the remote control looks almost 1 to 1 like the one from DJI. Come on, at least try to put your own design somewhere. At least for me, this leaves a bad taste right from the start.

When it comes to the drone’s other features, we can expect the usual package. We get a 4K camera that can record at up to 30 fps. In Full HD, 60 fps is possible, but apparently not 120 fps. HDR is supported, and there is also talk of a Night Mode for a better picture in low light. It is also stated that the 4K videos are recorded at 200 MBit.

There is a Tracking Mode, with which the drone automatically follows a marked object. The transmission of the live image in Full HD is also said to still work over 10 kilometers at 20 mbps.

A drone with endurance

At least on paper. According to the description, a 3,000 mAh battery is installed, which is above average. This is especially interesting because the Zino Mini is supposed to weigh only 249 g anyway. I’m curious. In any case, this should give it a flight time of 40 minutes in ideal wind conditions. That would be an absolute top value, DJI and FIMI both advertise values around 33 minutes. And those are always the optimal values, in practice you still have to subtract up to 15% from that.

What is also highlighted as a special feature is the obstacle detection in three directions (front, back, down). It is said to be the first drone under 250 grams in weight with this feature. In fact, both DJI and Fimi lack this on their “mini” drones.

Hubsan has always been mentioned by some as an insider’s tip over the expensive DJI drones. Especially when the Hubsan Zino and Zino 2 were released, the name was heard more often. For me, they have since somewhat disappeared from the radar, but this was also due to the enormous popularity of the Fimi X8 SE. And Fimi also has a new “mini” drone on the market with the X8 Mini.

Can Hubsan convince once again here? The promises still sound a bit too ambitious for me. Given the price and the technical data, if they correspond to the specifications here, the drone should be very interesting.