1 Kommentare December 5, 2020by Jens
Hey, guys! Just a heads up: The linked offer is already a bit older and the price of the gadget might have changed or it might not be available anymore.

There is always a neeed for a electric screwdriver in my opinion. The Hychika DD18BC is now available for $44.19, just activate the 15% discount on Amazon.

Cordless screwdrivers – the all-purpose weapons around household, do-it-yourself and garden. For large DIY projects, I am thinking of pallet furniture or firewood storage, they are indispensable. With the Hychika DD-18BC for around $50 we tested a device that has similar specs for a fraction of the price of established manufacturers. 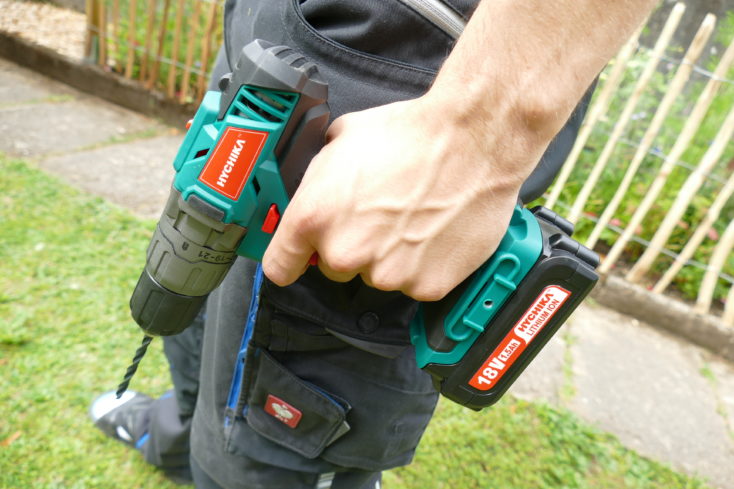 What must a good cordless screwdriver be able to do?

Of course, the requirements in the home are different from those in the workshop. But there are a few things that every cordless screwdriver should be able to do, no matter if it is a 3.3 or 20 Volt battery. First of all there is a stable chuck. This should run as smoothly as possible. If there are very small inaccuracies, e.g. with longer flat drills, you don’t have to win any prizes (depending on the price range how critical you should be) – after all, the tools are still hand-held. What should not be missing are also the adjustable clockwise and counterclockwise rotation and speed ranges, a torque selection, a battery (oh no!) and the speed switch (ideally variable). Nice additions are a working light, belt clip or magnetic screw holders.

The “China drill” from Hychika brings along a lot more accessories than you would expect from a $50 cordless screwdriver. Besides the device itself and its 1.5 Ah/18V battery, a large carrying bag and an extensive accessory starter kit is included: 4 flat drills, 6 twist drills, 6 screw bits and 5 socket wrench inserts come in a separate folder. A metal belt clip is also included. 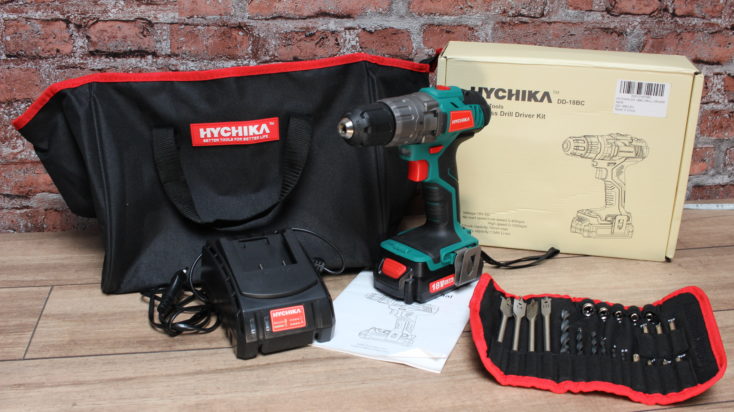 The charger for the battery has a US plug and charges with 27 W. The battery can be fully charged again in almost exactly one hour. The motor has an output of 35 Nm. A value, which many 12 V cordless screwdrivers reach, which should be sufficient however for each task approximately around the house. The, in my opinion, very understandable manual comes in 5 European languages, including German.

Design: I know that!

Visually, you might have been inspired a little by an established German manufacturer. That’s not bad at all – if you had asked my six-year-old self, I would have painted my cordless drill the same way. 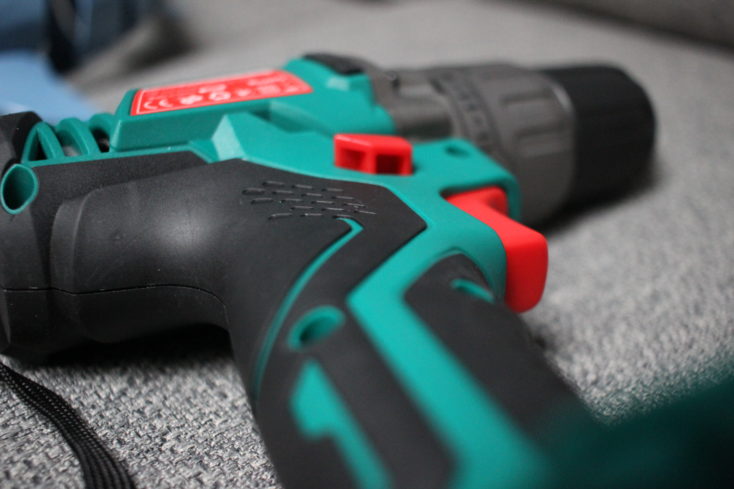 Of course, if you use decades of experience with your competitors, you can directly avoid fundamental mistakes in design. The placement of the function switches makes sense, the rubber coating is generous and in any case sufficient to maintain a firm grip and there is nothing to complain about at all during processing. Don’t be fooled by all the plastic – this is standard for the established manufacturers, at least for the somewhat cheaper models.

If you want to use the belt clip instead of the safety loop, you can attach it on both sides. You have to do without a magnetic screw holder.

In the end, however, one has made a beginner’s mistake: Even if the LED working light is without question bright enough, the placement is suboptimal. The lamp is so far up that the drill chuck casts a shadow on the drill hole / screw. Smarter would also have been an afterglow function and not just the glow at the moment the engine is running. Drilling in the dark works somehow, but that should have been solved better. 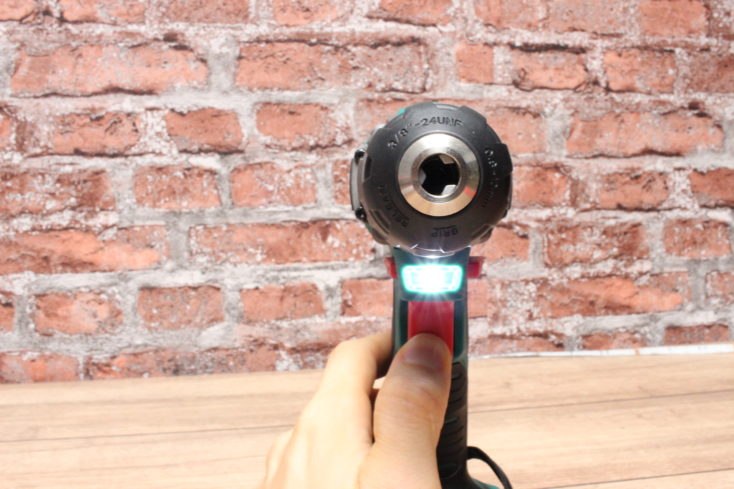 With 1370 grams with battery, the screwdriver even falls positively out of the series for models with comparable performance data (it is much lighter), but the weight distribution is a little bit front-heavy. Overturning does the screwdriver however neither with, nor without battery. 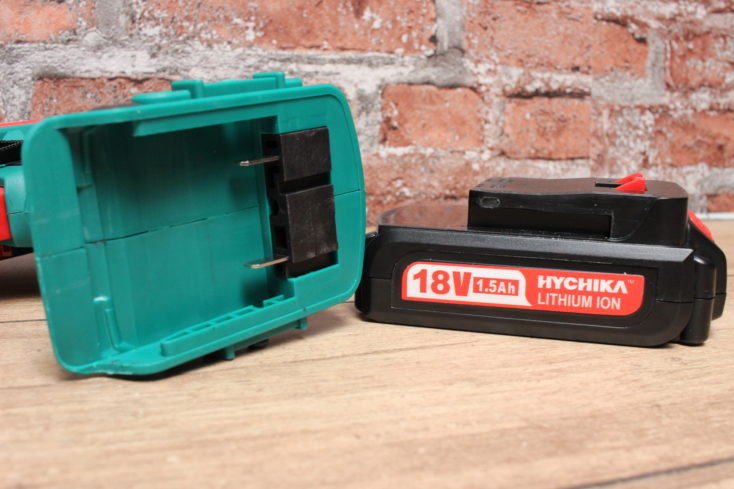 Performance – can the China model keep up with Makita or Bosch?

Is it unfair to compare the screwdriver directly with the industry giants from Japan and Germany? Maybe it is. But these devices set the standards. Unfortunately, the product ranges of both are so opaque that it is a science in itself to find the right tool for an adequate comparison. At Bosch it is probably most likely to be the GSR 18V-21 from the Professional series (blue) or the PSR 1800 LI-2 from the Home and Garden series (green), at Makita it is the DDF483RAJ. While the latter, however, costs just under $200 and Bosch devices with at least one battery are not available for less than $100, the Hychika DD-18BC achieves similar values, but is regularly available in special offers for $50. So do you have to make compromises in quality or do you now only pay for the name of the top models?

All these models are suitable for screwing and drilling. However, they are not percussion drills with which you can also drill concrete slabs. In my garden I tested the Hychika at my father’s wood storage. Even if he was not enthusiastic about it – there was nothing wrong with the performance of the drill. Thanks to the 10 mm quick-action drill chuck, the flat drill was clamped in place and off it went.

It must be said that the flat drills from the accessories are not really good. After a few drillings in the wood there were already signs of wear and tear and the drills do not really run round. This is not due to the quick-action drill chuck, which has a little play, but primarily the drills just sit badly in it. 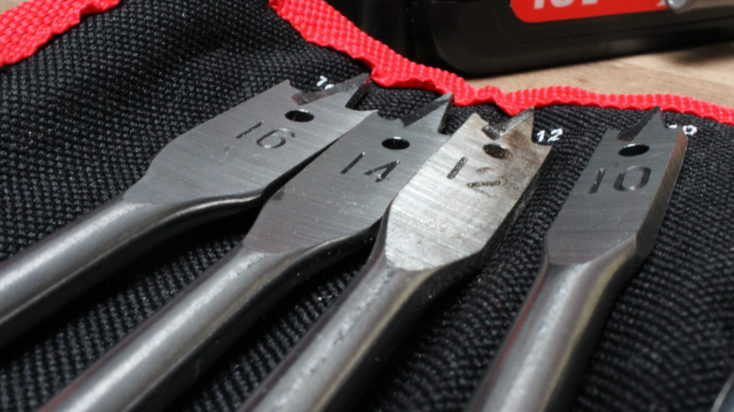 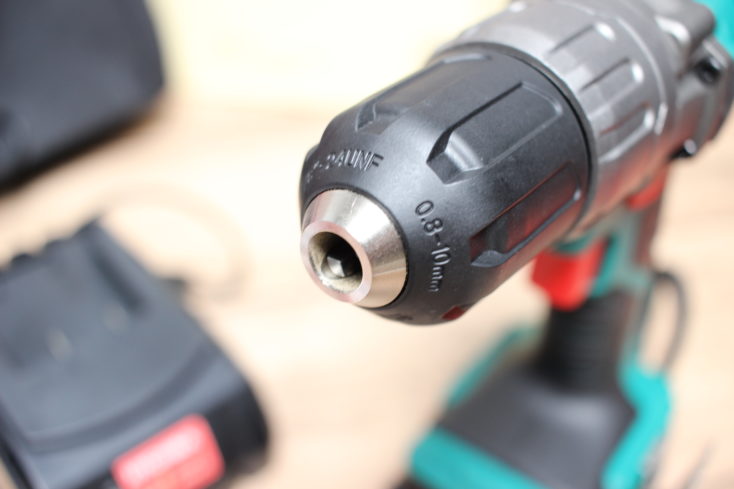 The screw bits would also have air at the top. You won’t get into trouble with do-it-yourself work, but if you have a bigger project to do, it makes sense to buy additional bits or a screw attachment. But there is nothing to complain about with the twist drills. 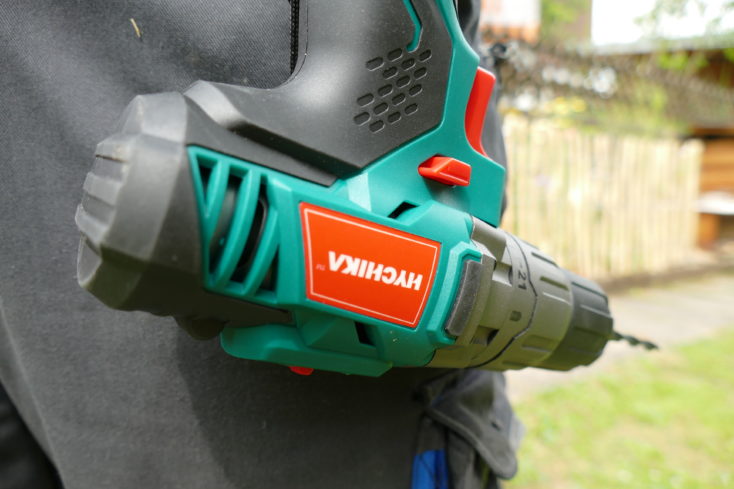 Apart from the noticeable spark, the drill shows no signs of overloading. When starting, a small flash of light can often be seen through the motor opening, but even after an endurance test the drill does not smell or heat up particularly.

Many providers now structure their product range so that the devices share accessories or even batteries. The advantage is the customer loyalty, in addition, the cost saving for the customers, who do not have to acquire 5 different spare batteries for the different devices. Hychika is no exception. Besides the Hychika DD-18BC, the Chinese manufacturer sells a low-cost impact wrench in a bundle, which is based on the 18V battery just like the matching reciprocating saw. In addition to the sister devices, you can also find other accessories for the cordless screwdriver on Amazon, including hole saw blades and an additional battery. The latter I would recommend without reservation even if you only want to buy the screwdriver. Although this 3 hour intensive screwdriver will last for 3 hours and will be fully charged within an hour, a flying change can be a blessing, especially if you are a bit forgetful and have not charged the batteries in advance.

For whom is the Hychika DD-18BC cordless screwdriver worthwhile?

It doesn’t have to be a Makita, Bosch or Hilti at home. There is no task in everyday life that the inexpensive device from China cannot master. And the Hychika DD-18BC can also shine in garden or DIY projects. Drilling wood is no problem at all with the right accessories and smaller holes through metal are also possible. The limits are then with concrete, but for exactly such cases there are extra impact wrenches. While other manufacturers often charge a few Dollars for battery, accessories and suitcases, everything under €50 is included. In any case, the price-performance ratio convinced us! 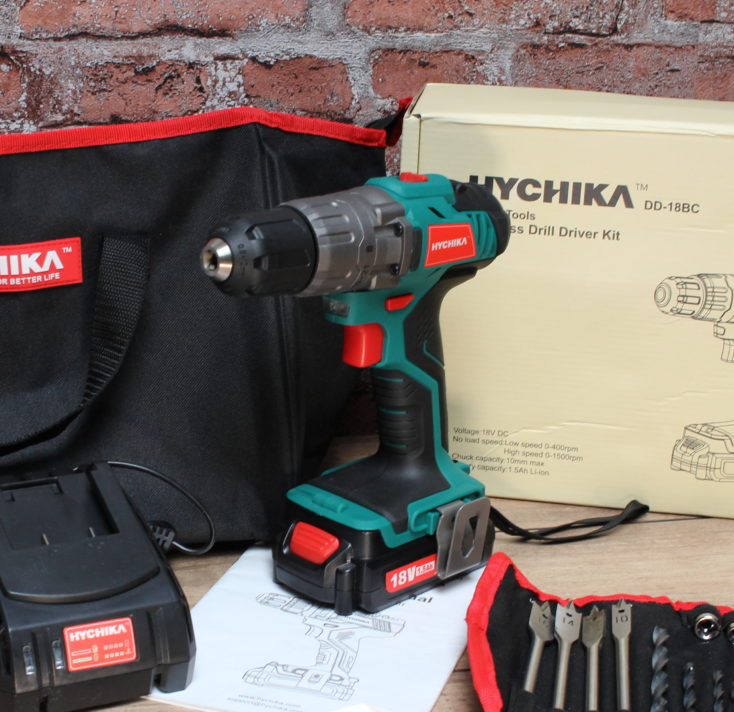 There are hardly any limits for the well-known brands and there is certainly a lot of potential for savings. If you are interested in more tool tests from Chinese manufacturers, please write that in the comments.