0 Kommentare January 22, 2019by Kristian
Hey, guys! Just a heads up: The linked offer is already a bit older and the price of the gadget might have changed or it might not be available anymore.

Well, I’ve been bugged long enough by our “Audio Tim” so here it comes: The little iHaper C003 7-in-1 USB-C Hub test. I personally don’t find this little gadget sooo spectacular now, but Tim is actually right: Even with smaller adapter solutions the Chinese manufacturers can build either crap or surprisingly good alternatives. And when I look around on the table, it’s the small gadgets that accompany me for hundreds of hours.

Who also uses a somewhat newer laptop or tablet … can continue to read on. It’s just a little something. Of course there isn’t sooo much to test in detail now (except for the performance), so it’s more of a loosely written, personal (!), field report. Maybe you will find yourselves in parts in it. 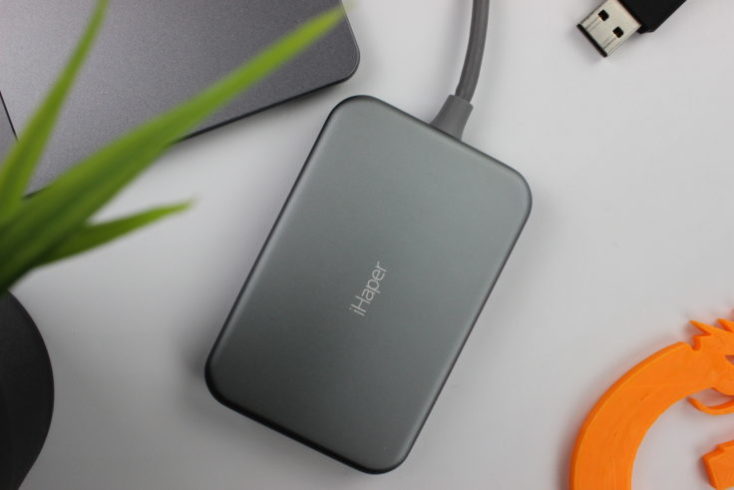 Personally, I am a satisfied user of the Microsoft Surface Book 2, which, like many newer notebook models, no longer has an HDMI output. So if you want to connect an external monitor (and yes my motto is: “The more monitors the better!”), you need a USB-C to HDMI adapter. So far this was the Aukey USB-C to HDMI adapter for about 10€.

This actually does a good job, but the monitor loses the signal at irregular intervals for 1-2 seconds. I have readjusted it several times with various monitors and an identical adapter. So far this only happened once a month and if you haven’t just looped music through via the HDMI output, it wasn’t really disturbing.

But the white Aukey-Adapter doesn’t look that nice anymore. The end of the plug is yellow. I’m not the style before function type now, but it doesn’t look really nice on a noble SurfaceBook 2.

But why did I go in search of an alternative now? The Surface Book 2 has only two USB 3.0 ports. One is permanently occupied by a Logitech nano receiver. So I only have one USB port at my disposal. That was already a few times too little. Although I can pair the mouse via Bluetooth, most keyboards can’t. And then the big replugging starts. Annoying.

You know: Currently my China-Gadget-“Resort” is the 3D printer area. Meanwhile I have tested about 50 (!) 3D printers. The instructions, firmware and test prints come either on a USB stick, an SD or MicroSD card. Usually a USB SD dongle is included, but these are the bottom drawer. I’ve probably had it five times that an adapter wasn’t recognized. Risk a short circuit at the USB port of the (not quite cheap) notebook because of a 10 cent gadget? The read/write rates are of course also moderate. With smaller file sizes it’s not really annoying, but at the end of the month minutes go by unnecessarily.

The iHaper C003 has a microSD card slot in addition to the SD slot (my notebook also has one). That’s really nice!

The Surface Book 2 can also be loaded via the Type-C port. Finding the right power supply/power bank was a bit of a grey matter (not all of them work with power delivery and some only charge X%), but then connecting an external monitor in parallel … that fails. The resourceful reader might recognize a parallel to the Lightning connection of the newer iPhones: Either charge, or listen to music via the jack ;-).

The processing quality is great. I like the brushed aluminium look (the cover is indeed aluminium) and the shade matches the Macbook dark grey shade almost 1:1. The underside is made of plastic, but is not provided with an “anti-slip coating” (as claimed in a review). Since my laptop is standing on a stand, the hub is only dangling down anyway ;-).

By the way: The C003 also works perfect on our MacBook models. The performance fits. Each time the USB stick or the (mirco)SD card was the slowest piece of hardware. That’s the way it should be :-). No matter which operating system (I also tested it under Ubuntu 18.04) I used: Everything was detected cleanly.

Honestly: The USB hub does what it should. No more, no less. Like probably 50 other USB hubs, which you can also buy at Amazon. The iHaper C003 is a bit cheaper than other models, which might be obsolete for the next Amazon XY offers at the latest. Nevertheless, I like the look of the iHaper C003, it’s fast and works reliably. Especially with the last feature some adapters/dongles have disqualified themselves.