1 Kommentare March 31, 2018 by Maike
Hey, guys! Just a heads up: The linked offer is already a bit older and the price of the gadget might have changed or it might not be available anymore.

At the 51st Consumer Electronics Show (CES) 2018, as every year, the new technical information from the major tech companies was presented. ILIFE Robotics was also present with the ILIFE A8, its new flagship model. We have all the information known so far. 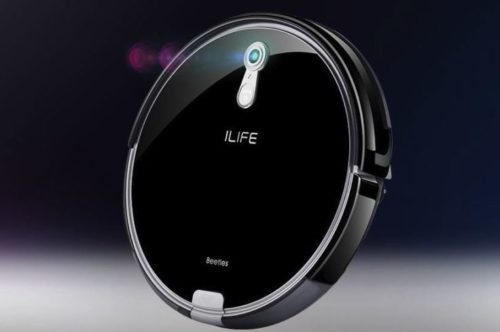 Optically the A8 is very strongly oriented to the ILIFE A6, on previously published pictures the on/off button is the only difference. Not to be confused with the ILIFE V8S 🙂 In addition, the vacuum robot is only 7.2 cm flat and fits well under furniture such as the sofa. A 360° camera is installed on the front, over which the suction robot navigates. A live view via app should also be possible.

From the ILIFE site there was also a first short navigation video on Facebook. Not much to see here, but it shows the method of navigation. The camera is located on the top of the vacuum robot and seems to be oriented to the ceiling to identify its position within the four walls. It is still unclear whether this is an exact room measurement or a mixture of gyro sensor and camera. According to the article details at AliExpress, the suction robot should have a working time of 100 minutes.

The data obtained by mapping and space measurement are stored on three built-in chips. This means that the map of the rooms can be called up afterwards and the vacuum cleaner can find its way around accordingly. By measuring the room, the vacuum should not leave out any areas, but should also not drive off any areas several times. The latter is both positive and negative. On the one hand, the vacuum cleaner does not travel any unnecessary distances, but larger amounts of dirt could remain lying around due to a one-time drive.

Voice output for a vacuum robot?

If the A8’s battery runs out, it returns to the charging station like other models and recharges its battery. The highlight of the ILIFE A8: It resumes work when not every area has been completed. A built-in voice alert system should also allow the current status to be displayed via voice output. This includes information on the battery status, the area still to be cleaned and working hours, for example.

Speech output is particularly practical if you want to know what’s wrong with the suction robot in case of problems. Until now, ILIFE models could only display error messages via display and codes. With the ILIFE A8 you know if the brush heads have raked or if the sensors need to be cleaned again.

The underside does not have any special features: We have the medium brush that we are used to with other models, which can also be exchanged for a rubber brush. Depending on the surface you can choose the right brush. With its two large tyres, the vacuum robot crosses obstacles and the small front wheel helps. The ILIFE A8 works with two brush heads.

Outlook: Where is ILIFE headed?

Since 2015, the Chinese company ILIFE has been growing rapidly. In 2016, Amazon presented the company with the “Amazon Top Newborn Brand Award”, which applies globally and not to China. Vice General Manager Chen Koon Leung announced at CES that the ILIFE brand wanted to continue to stand for “customer-friendly top models at low prices”. The models will become more and more powerful in the future, but should not cost as much as comparable models. This has already been observed with the ILIFE V80.

With the time more and more information appears, also a first advertising video was already to be found. However, ILIFE is still reluctant to provide information on technical details, so we will have to wait and see.

We will secure a test model as soon as possible and provide you with all the information you need until the test is complete. It can be assumed that the suction robot will be listed in more shops from April and there will be more official information from the manufacturer.