Price update: ILIFE A9 vacuum robot with vibrating base plate for $179.99

0 Kommentare May 7, 2020by Tim
Hey, guys! Just a heads up: The linked offer is already a bit older and the price of the gadget might have changed or it might not be available anymore.

Even though the model is already a bit older, the price is good for the range of functions it provides. The ILIFE A9 is currently available for $179.99 at Amazon.

ILIFE, one of the leading manufacturers of vacuum robots, is now launching new models on the market almost every three months. These usually score points with a good price-performance ratio, but technologically they are not yet on a par with Xiaomi or Ecovacs. Until now, the ILIFE A7 was only available as a model with app control, but without mapping or room surveying. This backlog is to be reduced and so ILIFE presented the new A9 series at this year’s CES in Las Vegas. A declaration of war or pure search for attention? 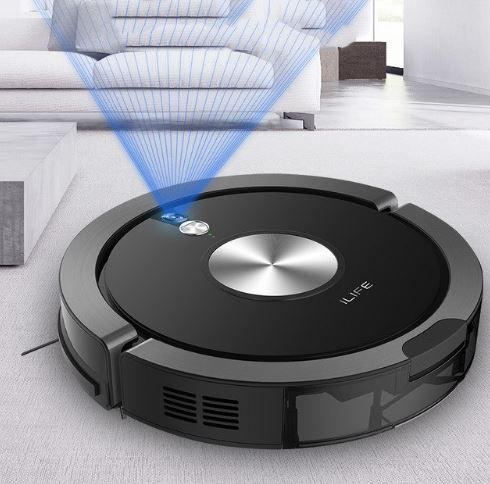 Classification in the product range

ILIFE is one of the most active producers of household robots worldwide: With the A9 and A9S, the manufacturer is following the new philosophy of bringing more powerful models onto the market at slightly higher prices. Here is the chronological order so that you can keep a reasonable overview between the A, V and X series:

A clear technology/marketing pattern cannot be discerned here, neither from the letters nor from the numbers. Only the identifiers “S” and “Pro” can be found at the end of the product name when individual vacuums are extended. The ILIFE A9 seems to be the bigger brother of the A8, but this cannot be said exactly. After all, both have the same navigation as an estimation factor.

When it comes to design, the Chinese have probably looked to the USA and used iRobots Roombas to come up with ideas. When I discovered the vacuum robot, I thought it was a fake of the American robots. Coated with an aluminium alloy, the A9 and A9S make a good impression both visually and (at a distant glance) in terms of workmanship. Here you can count on the usual ILIFE quality again.

The charging station is identical to that of the ILIFE A6 and A7. After all, it’s the manufacturer’s most stylish station. The camera navigation has been further developed in comparison to that of the ILIFE A8 in the A9 series. In this type of navigation, the vacuum robot orients itself on the ceiling and orients itself from the charging station on the basis of its movements. Initial experience reports will have to show exactly how this will work.

The “ILIFE Robot” (Android, iOS) app, which was used for the first time for the A7, has confirmed our expectations that future models will also have app control in their range. The ILIFE A9 remembers its route and transfers it to a map in the app. It is unclear whether the maps can be saved and whether it is possible to divide the map into zones (draw forbidden zones on the map). Fact is: The map is displayed “live”, i.e. immediately transferred to the app.

Like the A7, the vacuum robot is again supplied with a lot of accessories, again there is a newly designed remote control, but no virtual wall for staking out areas that the vacuum cleaner is not supposed to travel. However, these areas should at least be markable on the map. With the dimensions 33.0 x 32.0 x 7.6 cm, the vacuum robot is quite flat and fits under many different furnitures. Unlike the Mi Robot, for example, the two new models work with two brush heads on the underside.

Another interesting point: An Alexa controller should also be included in the software package.

What sets the A9S apart from other vacuum robots is an adjustable wiping function. Within the app, you can adjust how much the mop presses on the floor with the water tank. With this patented “vibration water tank”, manual wiping with manual force is supposed to be compensated to some extent. It certainly cannot be done in practice, but it is a step in the right direction in terms of development technology. In addition, the app allows you to adjust how much water (steps 1-3) is to reach the floor from the water tank.

If this only works halfway in practice, it would be a great step forward for the wiping function of household robots, which has so far been so weak. Nevertheless, one can be sceptical with a clear conscience, after all, we have already tested a large number of very weakly wiping vacuum robots.

One can be excited about the first ILIFE robots with mapping, but the wipe function is much more exciting. Finally be able to adjust independently how much water gets from the tank to the floor and give the vacuum robot commands on how to handle the mop? Sounds good at first. When navigating with a camera, I first have to think about 2010, but a lot has happened since then. Let’s hope that ILIFE is really involved.