0 Kommentare November 3, 2018by Thorben
Hey, guys! Just a heads up: The linked offer is already a bit older and the price of the gadget might have changed or it might not be available anymore.

Anyone who thinks of autonomous household work will inevitably end up at ILIFE at some point. The topic of wiping has already been initiated there with the X800 vacuum robot with wiping function announced a few weeks ago. The W400, the first wiping robot from the Chinese manufacturer, has now been introduced. It will still take a few days until the official sales launch, we have all the information in advance. 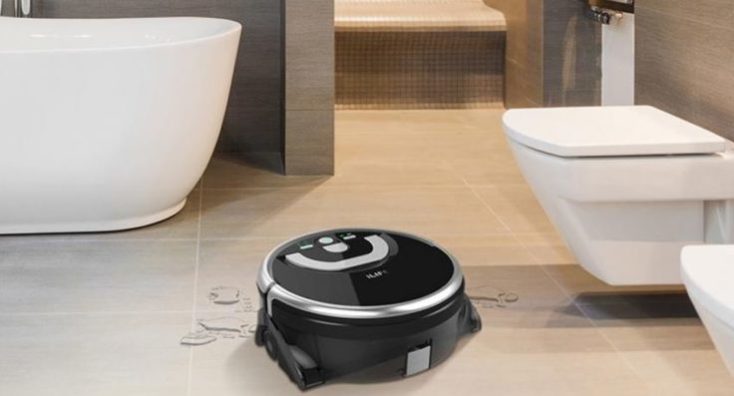 Technical data of the ILIFE W400

Never have to wipe again in four steps?

Wiping robots as such are not a novelty, but previous models have not yet been able to convince the end customer. The demand is there, also here in the editorial office we receive many inquiries about wiping robots. The problem so far: Wiping robots distributed water on the floor and then took up the dirty water with the wipe or other materials – and distributed it again to already clean areas.

And this is exactly where ILIFE started and installed its core competence in the W400: It absorbs dirty water and puts it into a 0.85 l tank. So you don’t run the risk (if it works well) of polluting already cleaned areas by driving over them again.

The robot goes through four steps during a cleaning process – and, according to the manufacturer, does not leave a drop of water (!) at the end of the process:

Due to the height of the robot, pieces of furniture under which it is to wipe must be more than 12 cm above the floor. This is the disadvantage of two very large water tanks. There are no clues for a carpet detection, without these you have to bring the carpets out of the danger zone before using the robot.

The developers at ILIFE are particularly familiar with vacuum robots and have used their expertise accordingly: Four of the modes known to us from our vacuuming colleagues have been converted to the W400.

The cleaning modes including function and area of application are briefly listed:

The decisive factor will be how much pressure the W400 receives on the floor to be cleaned with the wiping cloth. If the rotating roller on the underside does all the work here, I see a chance that the robot can also deliver satisfactory results. So far, some exciting information about the robot is still missing, such as whether it can also be controlled via app or remote control. At least it can be controlled using buttons on the top.

The ILIFE W400 goes into official sale on 11.11., Singles Day in China. Early Birds can already pre-order the robot now. From November, the wiping robot will gradually be available in other shops, such as Amazon.

I am personally sceptical as to whether the W400 will be able to achieve the advertised results with its work. ILIFE has seldom disappointed us in the past and brings with it quite a high standard of technology, but wiping household robots have always been a very hot patch for developers. It could be a step in the right direction for ILIFE, especially that the floor is also “dried” by the robot after wiping.

Something is happening! The next few weeks will show whether most problems with the ILIFE W400 have been solved. Of course, everyone has to decide for themselves whether manual wiping with a mop makes more sense. And who knows: Maybe the wipe function of the new ILIFE X800 is also so good that you can vacuum and wipe in one pass. We’ll keep you up to date on that as well.

What do you think: Wipe yourself or let the robot work?