0 Kommentare July 27, 2019 by Maike
Hey, guys! Just a heads up: The linked offer is already a bit older and the price of the gadget might have changed or it might not be available anymore.

Beer pong is one of many trends that has found more and more enthusiastic players in recent years. Meanwhile it is known almost everywhere and it is played at many student, shared flat and birthday parties. If you sweat too much on hot summer days, here is the inflatable beer pong pad for playing in the water. 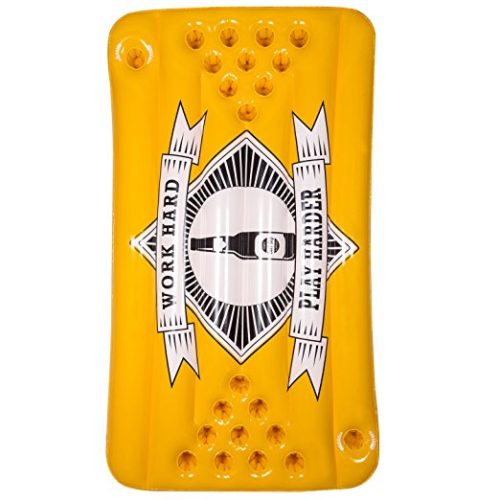 We probably won’t have to explain the rules to most of you. For those of you who don’t know them yet, here’s the short version. Two teams, usually two players each, face each other at the table and try to throw table tennis balls into the cups of the other team. After a hit, the cup filled with (a little) beer must be drunk by the other team. It is thrown alternately. Whoever has no cups in front of him first loses, and must also drink the cups of the opposite side.

This floating underlay is actually just an air mattress in which cavities for the drinks have been integrated. The biggest difference to “Mainland-Bierpong” is probably the size; with 42×72 inches the air mattress is shorter than most tables on which you play. Don’t be fooled by the pictures, most of them are Photoshop and/or especially small models. So take a closer look at the size of the product when ordering. 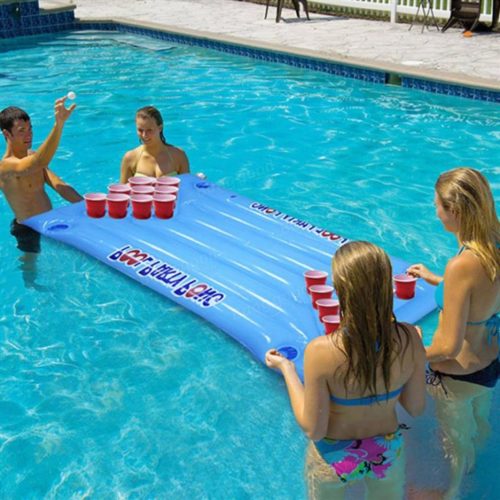 But let’s be honest, how big the floating beer pong pad is should not matter in practice. In the end, beer pong is about one thing: beer. And whoever wants to drink beer in rough quantities in the water doesn’t care. At least try to stay in depths where you can still stand.

All in all the inflatable Beer Pong Pad seems like a pretty nice idea for those hot summer days in the pool. Just remember not to overdo it 🙂