0 Kommentare October 18, 2018 by Maike
Hey, guys! Just a heads up: The linked offer is already a bit older and the price of the gadget might have changed or it might not be available anymore.

The Insta360 ONE X is an actioncam, which is supposed to stand out from other models due to two wide-angle cameras and an especially good image stabilization. Read here which features the camera has to offer. 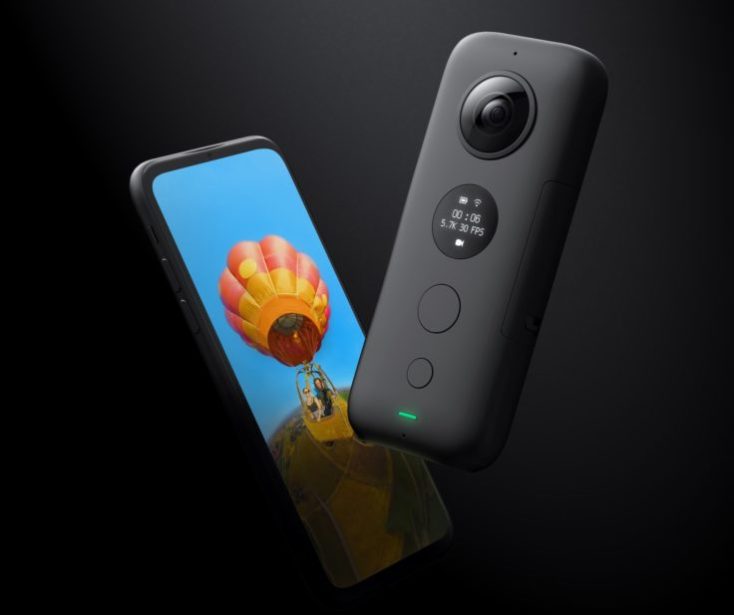 The manufacturer Insta360 comes (like so many others) from Shenzhen in South China. So far, a handful of cameras have been brought onto the market; the ONE X is now the successor to the Insta360 One, which already had a similar design. First of all, the Insta360 ONE X is a 360° camera. This means that it takes a round (“spherical”) image, for which it requires two lenses pointing in the opposite direction. Occasionally, the term “panoramic cameras” is also used for these models. If you look at the pictures afterwards, you can rotate the picture with your finger or mouse and look in any direction.

The camera records videos in 4K or actually in 5,3K. The video resolution is 5760 x 2880, which is the common value of both cameras, which is also converted to the spherical representation. One to one the resolution is not to be compared with the “4K”, which one sees for instance on the television. Nevertheless, the manufacturer’s previously published images are quite impressive.

The camera has a small display, but only a few settings can be made. Instead, you can view the recordings on your smartphone, which is connected to the camera via WLAN.

In addition to the stabilized shots, the bullet-time effect is one of the most spectacular features. At 3K and 100 fps, slow-motion shots can be taken in which, for example, the camera can be rotated around itself on a string. And with the Smart-Track function, any section of the 360° video can be exported to a “normal” 1080p video.

A lot of accessories

Beside the actual camera there are some optional accessories. The so-called “invisible” Selfiestick is actually not visible on the pictures, because it is located exactly under the camera (at the lower edge of both pictures) and is quasi cut out of the finished picture. The gadget called “Drift-Shot” is an arrow-shaped holder with which the camera is thrown. What at first sounds funny sometimes produces impressive slow-motion shots.

There are also two different cases, the Venture Case against splashing water and the even better Dive Case, which is used for diving.

Thanks to the standard thread under the camera, it can theoretically be mounted on any appropriate mount.

With a price of $399, the camera is not a bargain and is more in the price range of a GoPro than a Chinese Actioncam (even if the price in the China shops will certainly soon be cheaper). But the range of functions is correspondingly large. Even if the manufacturer makes the camera look especially good on his own videos, we just like everything pretty well so far.

What is your opinion about the camera?