2 Kommentare January 22, 2022by Thorben
Hey, guys! Just a heads up: The linked offer is already a bit older and the price of the gadget might have changed or it might not be available anymore.

Partly because of the pandemic, walking belts such as the WalkingPad C1 from KingSmith have become very popular. Still want to reach your walking goal in the home office? No problem. Now the manufacturer has introduced its flagship, the WalkingPad X21, which is space-saving but still offers 12 km/h maximum speed. 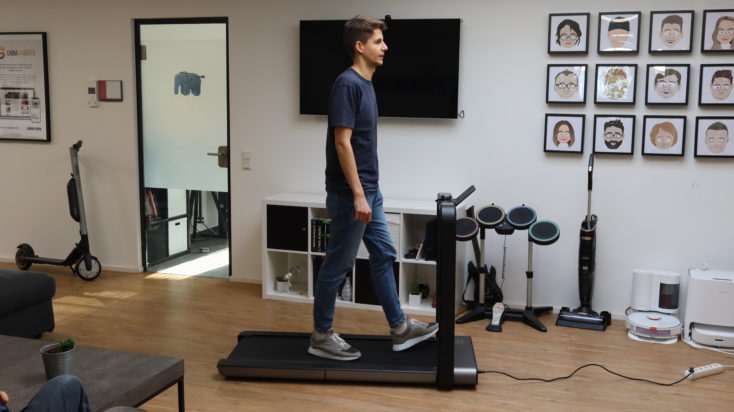 Technical data of the WalkingPad X21

The WalkingPad X21, which actually passes for a treadmill according to Kingsmith, comes in a large, heavy cardboard box. No wonder, after all it weighs over 40 kg! If the parcel carrier drags you up to the third floor without an elevator, a big thank you is required. However, the treadmill is well and securely packed, it is almost like a TV wrapped in styrofoam. In addition to the X21, a small box with power cable (EU plug, nice!), emergency strap, silicone oil, user manual and a smartphone or tablet holder is also included.

Unlike the manufacturer’s C1 or A1 Pro treadmill that we tested, the X21 is more reminiscent of a classic treadmill. This is mainly because you don’t get a completely flat treadmill here, but a raised frame. This can theoretically provide additional support, but the manufacturer does not use dedicated handles. Visually, I like the treadmill quite a bit due to the modern and minimalist design. Completely unfolded it comes to dimensions of 142 x 72 x 102 cm, folded it is only 95.5 x 72 x 22.6 cm. Thus, it simply does not look as massive in the apartment as treadmills that you know from the gym. 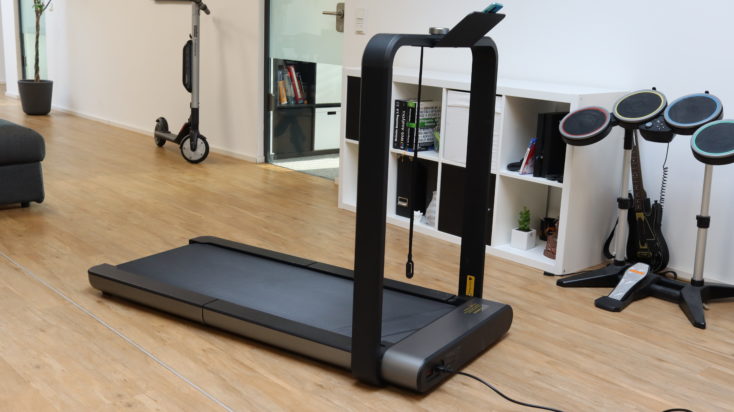 The special feature of the KingSmith WalkingPads, however, is their portability and stowability. While classic treadmills take up a lot of space, the WalkingPad X21 can also be folded. In fact, you can even fold it twice! You cut the walking surface in half and then fold it completely upwards, so the treadmill runs parallel to the frame. This way it only takes up an area of 0.16 square meters and can either be leaned against the wall or stored under the sofa. To do this, you need to press the handle on the back of the treadmill and then you can fold or unfold the treadmill so that it locks properly. 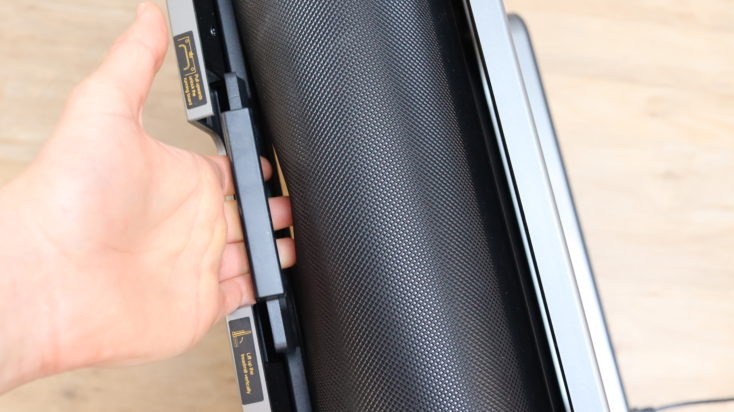 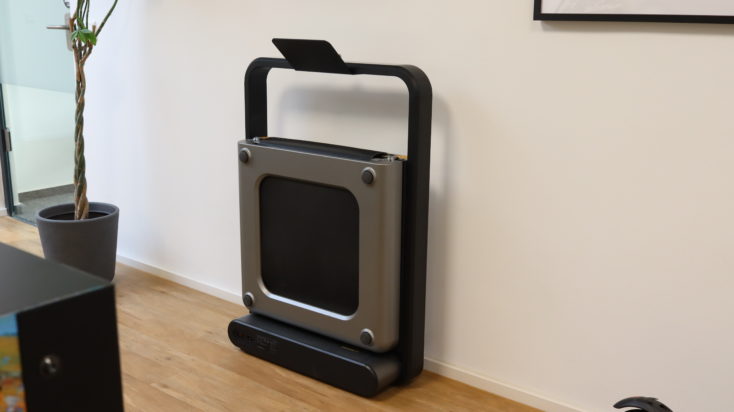 It doesn’t need to be leaned against the wall, but is also self-sufficient, which is why you can easily place it almost anywhere against the wall, so that it takes up as little space as possible. If you want to move it, don’t even try to carry it. Fortunately, the manufacturer integrates two plastic wheels at the back, so you can also roll the WalkingPad easily. 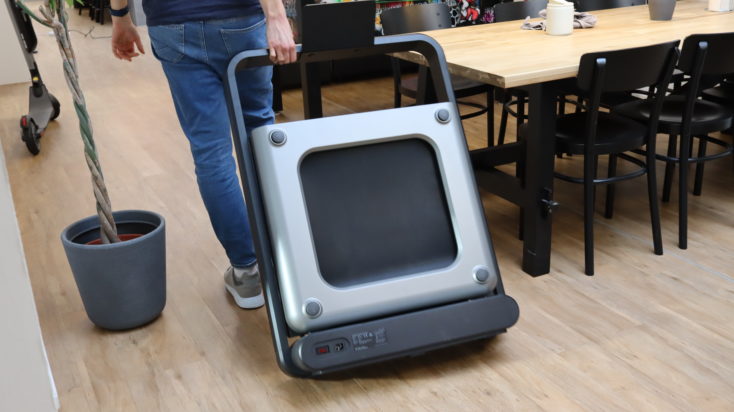 Processing of the WalkingPad X21

The black-gray treadmill is made of aluminum alloy and comes to a weight of 38 Kg. Thus, it is almost 10 kg heavier than the WalkingPad A1 Pro, but can withstand up to 110 kg maximum load. I would describe the workmanship as good for the weight alone, the frame is made of metal. At the joints has even thought to stick a warning, because you do not want to have his fingers between. But once you unfold the WalkingPad X21, it creaks. This is due to the layer under the walking surface. Due to the folding design, this layer is stretched again and again, similar to foldables, which causes this creaking noise. So it has to be like that, don’t worry. 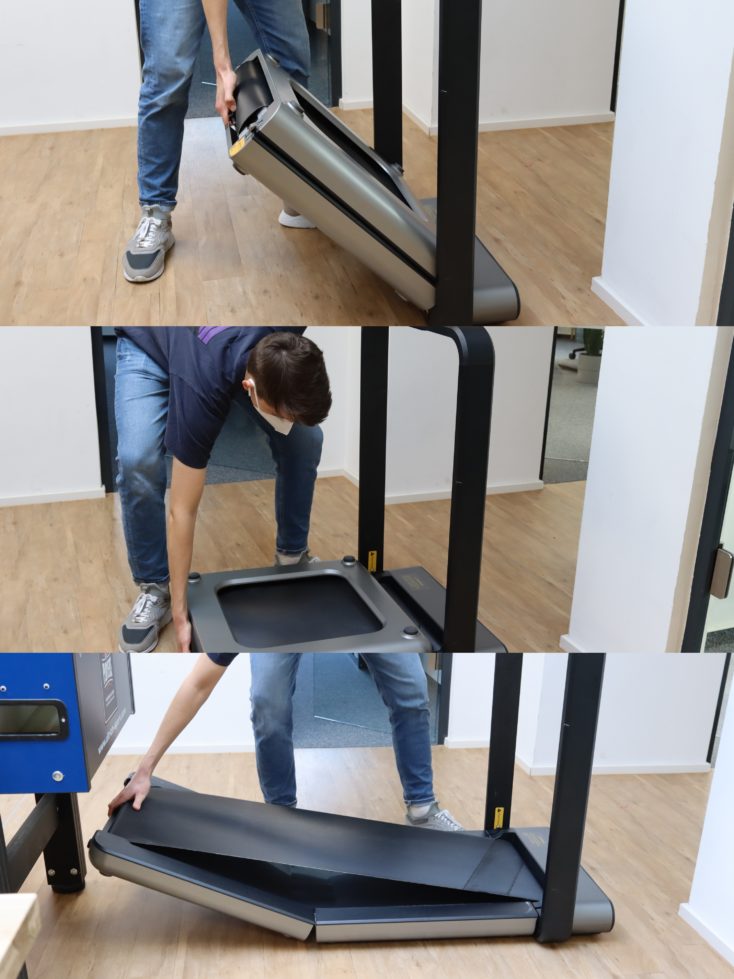 We had the problem once during use that there was a clacking noise on the rear axle. This suddenly occurred without us changing anything. There are two hexagon socket screws on the back with which you can easily adjust the axle should the treadmill move too far to the right or left. We adjusted that and then jogged faster on the treadmill again, which quickly solved the “problem”. If there are problems with the smoothness while running, you can alternatively still use the supplied silicone oil to lubricate the axles. This has not yet been necessary for us. 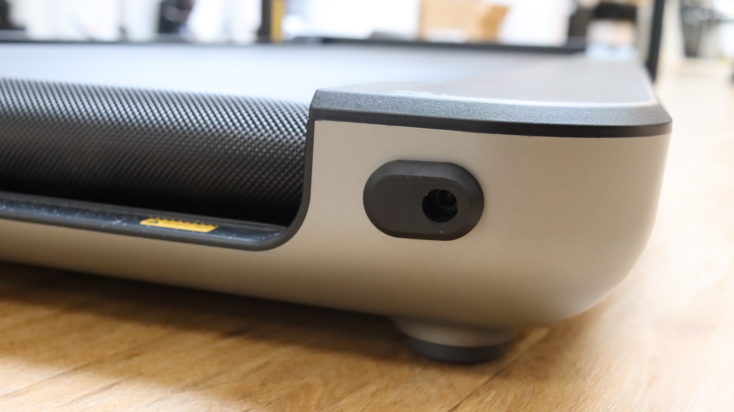 One can still criticize that the rotating ring on the display is not fixed, but simply lies on it with a perfect fit. On the subject of safety, you should also consider that the treadmill theoretically also works when it is connected to the power and folded in. In my opinion, a lock should be built in for this, but as a rule, this should not happen to you either.

Even with app control!

On the top of the frame is the LED display and control panel, the Walking Pad X21. In order to use the treadmill at all, the emergency strap must be plugged into the front of the control panel. If you pull this while walking, the belt will stop almost immediately! The emergency strap is certainly important, but if you feel confident enough, you can theoretically cut the strap off. At the end is a clip that you can attach to your pants, for example. The speed can be set with a dial, and you get information about time, speed, distance and calories burned at the same time. If you want to end your run, you simply press the button and the speed is slowly reduced to zero. 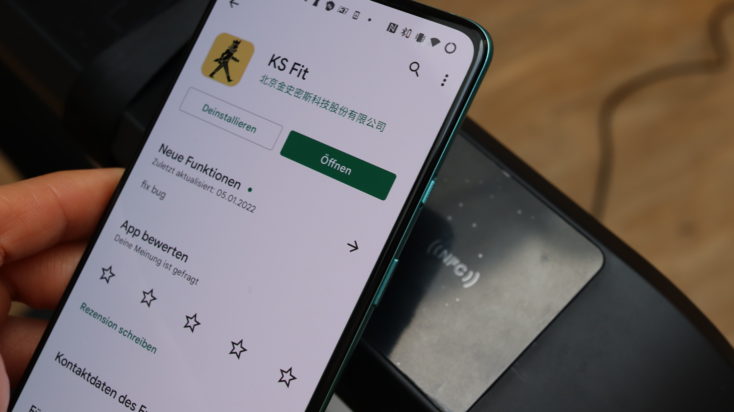 There is also an NFC interface on the control panel of the WalkingPad X21. This makes it easy to pair the treadmill with the cell phone and the “KS Fit” app installed on it. This is available for Android and iOS, but can only be used in English, Chinese, Polish or Spanish, but not in German. Not quite as bad, the app is relatively clearly designed, but poorly rated in both app stores. So far, I can’t quite understand why. If you have paired the WalkingPad via “Add Device”, you can also start the treadmill with the app, for example. 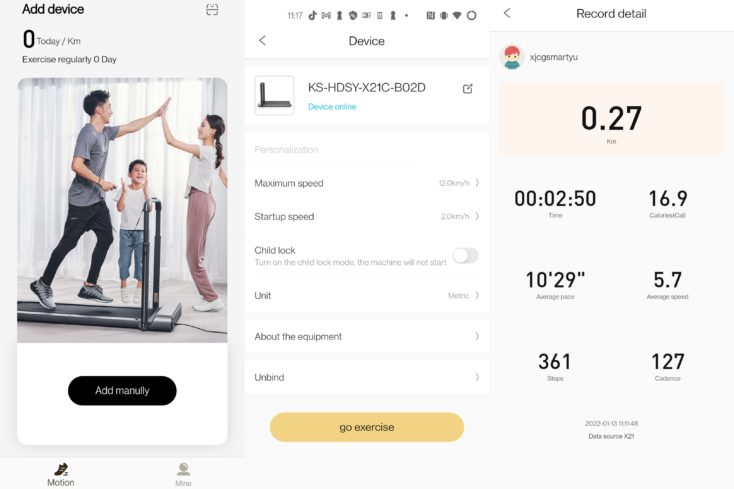 It collects the same data as the WalkingPad X21 and additionally steps as well as cadence. After each unit a summary of its data. Speaking of data, you can only connect this in the app with Google Fit, if you use that, via Strava or Adidas Running, it is unfortunately not possible. You can also set the maximum and minimum speed, activate a parental lock that can only be unlocked via the app, and change the unit.

Up to 12 km/h maximum speed

The slightly cheaper WalkingPads are often limited to only 6 km/h maximum speed (or less), so they classify themselves more as a walker than a treadmill. The KingSmith WalkingPad X21 supports a top speed of 12 km/h, but you can also set it to at least 1 km/h. To put this in perspective, as a regular runner and an average pace of 5:30 minutes per km, I get an average speed of 10.8 km/h according to the Adidas Running app, so the treadmill may well be worthwhile for runners. It is nice that you can easily attach the tablet holder to the control panel to place your smartphone or tablet on it and watch YouTube videos from China gadgets, for example.

The drive is a brushless motor, which is more durable and efficient than a brushed motor. The running surface is 460 x 1210 mm and consists of four layers. Underneath the actual anti-slip treadmill, for example, there is still an EVA foot padding. With a volume of 75 dB at maximum speed, however, the device is of course not completely quiet, with a fast runner on the belt it gets a bit louder. At maximum speed, I get a noise level of just under 65 dB at a distance of about 1m. So before maybe ask the neighbors 😉 At 75% of the volume of my headphones I hear the treadmill itself virtually no longer.

I have been jogging regularly since the beginning of the pandemic, but I have never been a fan of treadmills. The “fear” to somehow fall under it has not taken me the WalkingPad X21. Nevertheless, I like the jogging pretty well, the suspension by the belt is about like running on the road and could be ideally, of course, a little softer. For me it is a change to constantly run the same speed, in city traffic you always have to slow down or it goes uphill. The tread surface is large enough in my opinion and the control panel as a holder for emergencies is also psychologically worth a lot.

We liked both the WalkingPad C1 and the A1 Pro in the test, and the C1 was especially popular because of its price. The price of the WalkingPad X21 is now much higher, at over €800 you have to dig deep into your pocket. But you get a lot for it: 12 km/h, double-fold design, an app, NFC and a few other interesting features. “Normal” treadmills are also available for less, even from Mobvoi. Here, you probably pay for the extremely compact design, which is an immense advantage, especially in smaller apartments.

And in the test, I like the WalkingPad X21 quite a bit as an actual “treadmill opponent”. Personally, I can’t imagine working at a standing desk with such a walking belt. If that’s what you have in mind, you can also get away with it cheaper with the C1. So I would only recommend the X21 as a treadmill alternative if you don’t have much space at home, then you simply benefit from the bi-fold design. Nevertheless, it has to be worth 800€ to you, for that you have to run quite a few kilometers to recoup the price, after all, a regular treadmill is cheaper. The app could be even better, the workmanship as well, but all that doesn’t diminish the fun of running with the nice details like the tablet holder or the custom app.

Would the WalkingPad X21 be too expensive for you?