4 Kommentare August 27, 2019by Tim
Hey, guys! Just a heads up: The linked offer is already a bit older and the price of the gadget might have changed or it might not be available anymore.

Packed with 52 games and 16 GB of storage space for more open source games, the LDK Game Handheld is designed to provide entertainment in between. We’ve tested whether the Linux-based mini console is really fun in practice. 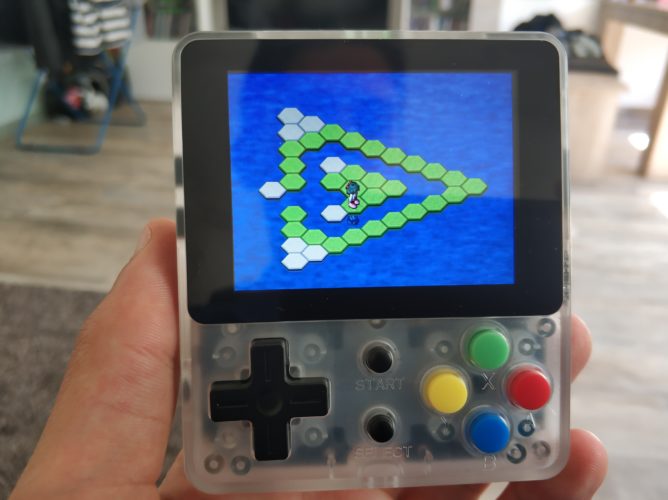 You can’t call the LDK handheld a real clone, but the resemblance to various older Nintendo products can’t be denied. Of hundreds of games on these China devices, only a handful are really playable – or cool enough to be played more than once. We know this from previous tests, such as the Gameboy iPhone case.

Even if the shops speak of “classics” or “original titles”, one can be sceptical, often these are only cheap or laggy copies up to the complete distortion of the actual classic. This time we also have such “fakes” of original titles with us. However, this doesn’t mean that they have to be garbage.

Even if only a few games on the handheld (or downloaded) are fun, such a mobile console is still worthwhile from my point of view. After all, the price is not so high. But for that you have to have fun with the device. Let’s get started!

Scope of delivery and operating elements

A tidy little yellow box makes you want to explore the rest of the pack. The package includes next to the small handheld itself: 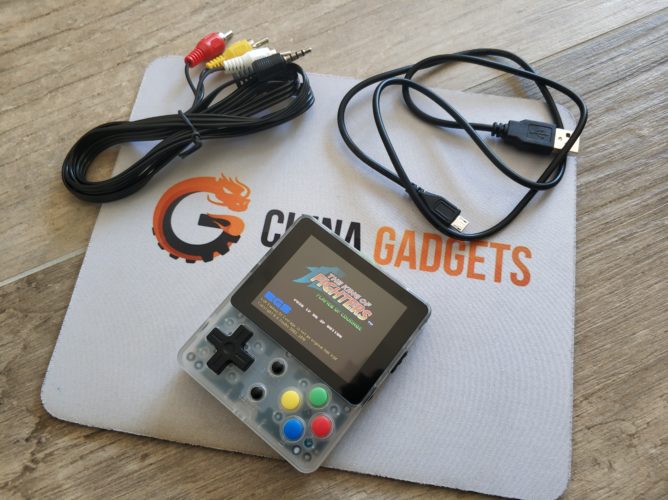 You don’t really need a manual for such a device, this descriptive picture explains pretty much everything you need to know:

According to the packaging, an instruction manual should also be included, but it is not. As already mentioned, half as wild. Due to the size of the packaging with the quite smart design, you can also give the handheld as a present.

We got the transparent version from TomTop (thanks for that), even though I might have preferred the yellow version afterwards.

Of course, you can’t expect the same standard of workmanship here as you would expect from earlier Gameboys or even newer DS devices from Nintendo. But the LDK Game Handheld isn’t quite that far away from that, the keys make a robust yet sufficiently mobile impression. In fact, the keys might be a bit too small for one or the other. These are the sacrifices you have to make on a small pocket console for on the go.

With dimensions of 8.8 x 7.5 x 1.8 cm, the console is significantly smaller than a classic Gameboy, and at 106 g it also weighs considerably less. The 2.6 inch display is certainly not everyone’s cup of tea, but here again the aspect of a “fit in the trouser pocket” is superficial. Of course, the display is in color.

Besides the control pad, there are a total of six buttons on the front. It’s a bit annoying that you need very good eyes to always be able to read everything. It’s not that you don’t know what to do, but sometimes you simply can’t see some things. Fortunately, all 52 games on the handheld are self-explanatory – at least from my point of view.

How to use a Game Boy will be known by anyone thinking about buying this variant of a mobile console. A, B, X, Y, pad and R and L on top. Depending on the game, the controls vary a little, but usually only when you need to confirm something. The Gameboy player is accustomed to using the A button, but “Start” is more frequently required. To get back to the menu from a level in the game, you use “Select” in almost all cases.

Change language before using the handheld?

The R and L buttons on the top of the screen allow you to quickly navigate to the handheld’s settings. There you can also change the language, for example even to German. But in the end, you only get a few German words, while the rest remains in English. Looks like this then:

All of the games, mainly developed by freeware and one-man studios, have their own menus, but every now and then an Asian language appears, probably Japanese. This doesn’t bother you, because you understand everything.

There are no cartridges here, but 52 games are already installed on the device. A micro SD card slot on the left underside of the handheld allows you to insert a memory card of up to 16 GB, which in turn offers even more space for games. As an open source console based on Linux, the user can independently boot the LDK handheld, drag games onto it (emulators) and get the appropriate presets.

To install open source games, connect the handheld to your computer via the supplied micro-USB charging cable and download the titles you want to play. Of course, you have to drag the corresponding 32- or 64-bit game into the folder of the corresponding console, for example the correct Pokémon version into the Gameboy folder. Where can I get the games from? A search engine query with the respective game + console + open source/ 32-bit will help. 😉

Nearly all pre-installed titles are classic side scrollers, which can be divided half each into jump ‘n’ runs (e.g. Mario) or beat ‘m ups. But also some arcade games are included.

I played all 52 games, only a few games could keep me in the game longer than 30 seconds. But again I played 30 minutes. My four favorite games of the handheld:

The Legend of Zelda: Return of the Hylian

Before joy takes over: This Zelda game is not an original version, but an open source game originally developed for the PC by Vincent Jouillat, which was later reprogrammed as a PS-Vita version.

In fact, the game is a lot of fun and reminiscent of older Zelda titles. Definitely the game with the strongest long-term motivation.

Fortunately, the game score can also be saved here and is not lost if you switch off the device again.

In Jump n’ Run “Super Tux” you play the Linux penguin Tux, with which you have to free your girlfriend Penny from a castle. On your way through the different levels you collect coins and other extras. Emerging enemies like rolling snowballs and armored ice blocks are defeated by jumping on the head or with fireballs. These can be found in blocks that are distributed in each section.

“Wait a minute,” says the attentive reader. Free his girlfriend from a castle? Collect coins? To defeat enemies with jumps on the head or fireballs? Exactly, “Super Tux” is like Super Mario – only with a penguin. The fun factor of earlier Mario games is definitely there, too.

By the way: Super Mario is also represented with Super Mario War: April Fools Edition, but it’s more fun with the Penguin, at least on this console.

“Falling Time” is a very entertaining game in which you try to get down from the top of the screen with a penguin head in the classic side-scroller manner, passing obstacles. You also have to collect fruits that slow down the “sinking” and approaching of the upper edge.

Nothing for long gaming evenings, rather something for rounds against the little brother in between (as an example).

In a castle one collects treasures and chests, fights on its way all imaginable guards and opponents. The goal: To somehow get through the countless corridors of the castle and kill the boss Hydra who lives there. I’m still searching for this beast, there’s long-term fun here too.

You notice: The impression that the handheld is particularly suitable for entertaining rounds in between is absolutely correct. Depending on the title, long-term motivation can still arise. Positive however: All games run smoothly, which does not apply however to all open SOURCE plays. Pokémon for Gameboy, for example, runs smoothly, faster games like the Sonic Jump-n’-Runs present the little handheld with challenges.

The shop pages also advertise the fact that the small console can be used to watch videos, listen to music or read e-books. The emphasis is on “can”, with the small display with such a resolution there is also the (nowadays) much larger smartphone that you carry with you anyway. Ergo nonsense.

The LDK Game Handheld is an entertaining, light, small and comparatively inexpensive device, which is particularly suitable for on the way (bus, train, car journeys on the back seat). You won’t sit in front of the device for days on end, nor will you become so addicted to one of the games that you want to play it through from front to back (except for Zelda or Super Tux maybe). But of course it’s also a type question.

Those who can live with the fact that not all games of the handheld can be really played, either load new titles on the device on their own, or accept the gadget as such what it is: An entertaining entertainment possibility on the go.

Are you interested in the mobile console? If so, I’d be happy to let you have a long-term experience with open source games. Which games would you be most interested in?