Summer is within reach. The days are getting longer again, the temperatures are rising and everything is blooming in lush green. Just the right time to enjoy your garden with friends and family. An inviting atmosphere can be created with a LED solar lamp in wine glass optics. 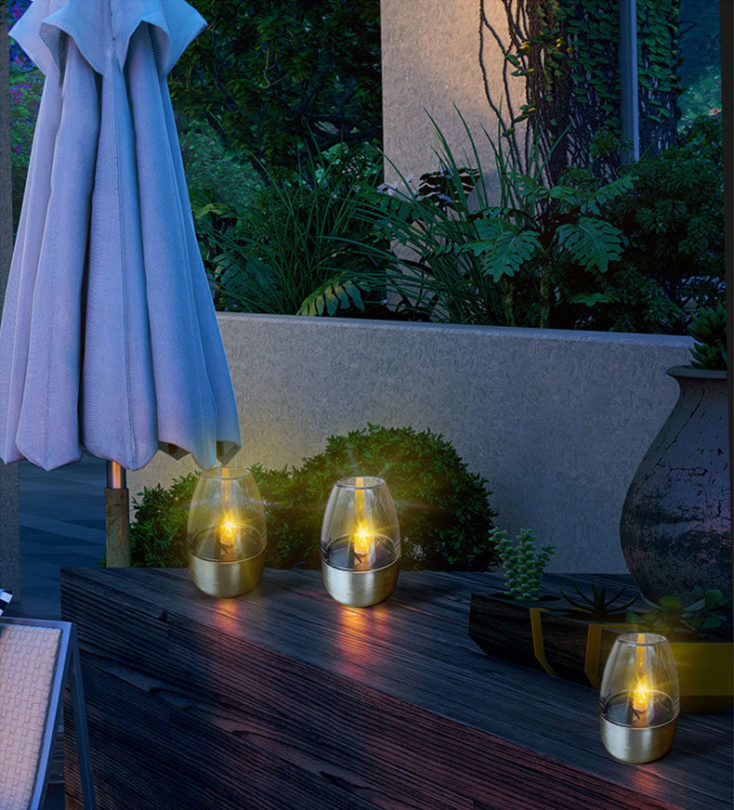 As pretty as the flame looks, it is not real. This is a LED solar lamp in wine glass optics. Completely safe and without risk of burns. A cool extra here is that the LED light is powered by solar energy. So you can easily refuel the small LED solar lights with sunlight. Just put it in the sun and in the evening you can enjoy the light.

One luminaire, many advantages

The body of the lamp is made of stainless steel. On top of it is the head made of frosted glass. Inside the head are both the LED light and two small solar panels. Fully charged, the light lasts for six to eight hours.
With an IP65 rating, the LED light should have full touch protection. Dust should also not be able to penetrate, just like splashing water.

As a result, you should be able to leave the light outside without hesitation, even in bad weather. And if you don’t need the light, you can turn it on and off via the on/off switch.

And if you’re the forgetful sort, you don’t have to worry, because even if the switch is still in the On position, the light will automatically recharge when there’s enough sunlight, so you can use it again at night. With a size of 6 x 6 x 8.8 cm, the light can be easily stowed away when necessary.

There isn’t much to say about this gadget, actually. The design plays a primary role here. Wine lovers will probably find it more appealing than someone who is more into cottagecore. If the light really delivers what it promises, I think the price from AliExpress is more than fair.

My mother once bought something similar from Kodi at a higher price, but the lights lasted five years. Until a storm leveled them to the ground. And who should be 10 pieces but too much, which gets the lights there also individually or in smaller groups.

I love everything that is practical and makes everyday life easier. No matter whether smart technology or curious gadgets. For you I plunge into the vastness of the World Wide Web and research the latest trends.