0 Kommentare July 2, 2019by Tim
Hey, guys! Just a heads up: The linked offer is already a bit older and the price of the gadget might have changed or it might not be available anymore.

The Chinese tech giant Lenovo is mainly known here for laptops, but is now also a recognized player in the headphone and wearable market. From the range of fitness trackers / smartwatches, Lenovo is more likely to rely on hybrid models, which in our test articles have always had difficulties asserting themselves against the Xiaomi Mi bands. With the Lenovo HX06H, GearBest is launching a new model, which is intended to pick up where it left off with more popular models. 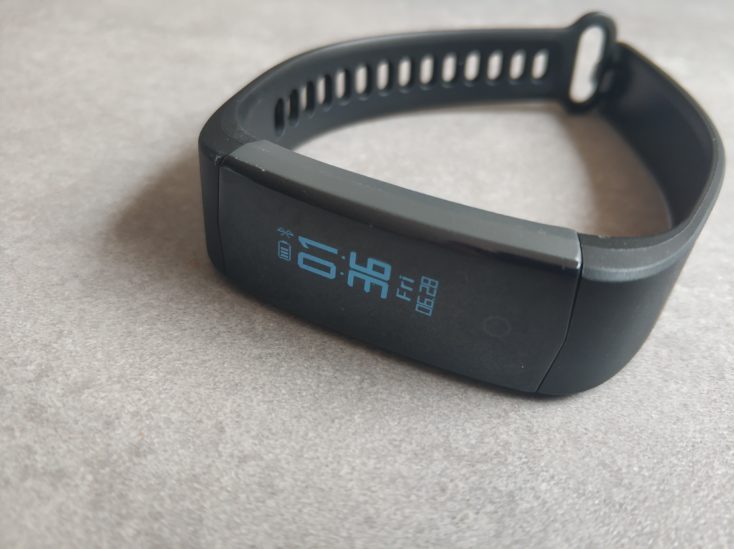 “Why do they still bring the Lenovo things when there are the Mi bands that are much better?” Some will ask themselves that question. In fact, I personally find the Lenovo fitness trackers visually more appealing than the Xiaomi bands (and that, where I’m admittedly a little Xiaomi fanboy).

I also like the app design better, of course it’s all a matter of taste. I’ve been wearing my Lenovo HW02 for over a year now and am still fully satisfied. Now another Lenovo tracker where you ask yourself who is responsible for the product names of the Chinese tech giant.

Probably the smallest scope of delivery I’ve ever seen on a product – possible on a fitness tracker. Apart from the tracker, there is only a Quick Start Guide in English. And you don’t really need it, all functions are self-explanatory.

Why is there no USB charging cable or 2-pin connector in the package? The wristband contains a plug that can be used to charge the tracker in combination with a normal smartphone charger. Everyone will probably have this at home. Otherwise, the tracker can be plugged directly into the USB port of your laptop or computer.

If I’d had the Lenovo Cardio Plus HXo3W Smartband, HW01 and HX06H pressed into my hand at the same time, I wouldn’t have been able to tell which model is which. A fitness tracker doesn’t offer much scope for design creation, but a full touchscreen display would have been much nicer.

So here we have a display separated from the band, which is well integrated into the course of the bracelet. But the orientation on the HW02 would have been better from my point of view, correspondingly with a continuous display and touch screen. Of course, recharging the battery with the plug integrated into the wristband is cool, but I prefer design to technical gimmicks in this respect. After all, I want to wear the Tracker on my wrist every day.

When it comes to workmanship, there’s nothing to complain about, high-quality plastic was used here, which doesn’t have a negative effect on the wrist. For most forearm sizes there should also be enough adjustment possibilities on the strap. The CE mark, which is often requested in the comments under other articles, is also part of the game.

Contrary to the mentioned Specs we could also go swimming with the Honor Watch Magic and the Mi Band 3, even if the ATM5 waterproofs only for sweat and showers. Here you want to be on the safe side as a manufacturer. So: Already at your own risk in the swimming pool, but is possible.

The individual functions of the Lenovo HX06H at a glance

The standard functions are again all included. The Lenovo HX06H comes with an anti-sleep mode that is supposed to prevent you from falling asleep while driving, for example. And that via vibration. That smart wristbands can detect deep and restless sleep phases is nothing new.

However, to claim in advertising that you can avoid car accidents by vibration is simply unnecessary and dangerous. Heart rate monitoring should not be used to decide when someone should drive and when not. Of course we didn’t test this function. You don’t have to go through all the nonsense.

Display and battery of the Lenovo HX06H

The display of push notifications on the 0.87 inch OLED display is particularly interesting. The tracker informs about WhatsApp messages and SMS, shows callers (number) and of course has an alarm function. The tracker even displays texts in two lines, so that you know what it’s all about at least before you reach for your smartphone. Can it be very practical if you want to ignore someone? ?

By quickly pressing the button on the band, you can scroll through the individual functions on the display. If you turn your wrist briefly from the outside to the inside (as you would look at a watch), the display is activated.

Push notifications on the display

The push notifications that can be shown on the display are:

The display of the HX06H is almost unreadable when the sunlight is a little stronger. In the app, the display brightness can be increased, but you can’t see everything in strong sunlight and a brighter display naturally requires more battery power.

As mentioned above, you can remove one side of the band and plug the connector into your laptop or similar. This way you can charge the tracker’s battery at work or at university without having to carry a charger cable with you. Definitely a better solution than the often shaky 2-pin connectors, but at the expense of the design.

Up to 20 days pass before the 100 mAh battery needs to be recharged in standby mode. That’s an average value of charging the battery once or twice a month, but I think it’s reasonable. The new Mi Band 4 has the same value.

The HX06H is connected to the smartphone via Bluetooth so that the data (pulse, sleep, steps, calories, etc.) can be tracked in the app “Lenovo Life” (Android/iOS) and can be traced over a longer period of time. The app is also available in several languages, after all, Lenovo has been an international manufacturer for quite some time now.

After the fast registration the app asks for some personal information, which should be answered truthfully. So you can also assume serious values and tips within the app. However, Lenovo Life also wants to know what job you are doing. I guess so that you can weigh up whether someone is sitting a lot or is already moving a lot at work (#movement reminder). However, specifying gender, weight and height makes more sense.

Then it is only necessary to connect the tracker with the app in order to be able to track the measured values over a longer period of time (weeks/months). Bluetooth 5.0 is available for this purpose. Under “Connect to device” select “Smartband” instead of “Smart watch” and “Smart body scale/scale”. In the ideal case one has to a complete monitoring of his body values of course also a smart scale.

The connection with the app is quick and easy. Then you’re ready to go!

Functions within the Lenovo Life App

All right, let’s slow down again. It’s a good idea to specify which push notifications and features you want to use in the settings before using them. Not everything makes sense. Setting the vibration level, adjusting the brightness of the display and switching the Find Smartphone on or off: Decisions have to be made.

For each function you get an overview of the measured data by swiping to the right in the app interface. Click on it and it becomes a little more detailed.

Let’s go through the most important functions of the tracker individually.

In fact, compared to other fitness trackers and their step counting function, each device has a different value, but as a guide this function is very suitable. After this test I noticed again that I should at least move more after work, take more steps.

A function I wouldn’t want to miss, but it’s not a novelty and not a real unique selling point of the Lenovo tracker. A must-have.

Although I still find the function of sleep tracking one of the most interesting, I also trust it the least. The pedometer serves as a good guide, as does the heart rate monitor and sports mode. The problem with monitoring sleep is that we can’t reproduce it (because we’re sleeping). Only the duration of sleep can be estimated, but not when our deep sleep and restlessness phases were. This function can be viewed with a doubting eye.

Of course, the data obtained with the tracker can also be shared in the different networks (“Hey people, check out my sleep last night”). This is probably rarely used.

You shouldn’t expect too much from the sports mode, especially the calorie counting is very inaccurate and only estimated. You can choose between walking, running, cycling and even hiking. The heart rate can be measured and displayed live. In addition, the time is measured, how many calories you have burned, the distance you have run is displayed on the map and after a predetermined training goal (1-20 km), the band vibrates when you have reached the goal.

In fact, the measurements are very inaccurate, the tracker also calculates meters and burned calories if the band is simply lying on the table. Stupid.

An extremely useful feature (especially for busy sitting online editors) is the motion reminder. The band recognizes if you haven’t moved for a while (steps taken) and reminds its owner after a pre-definable time (30, 60 or 90 minutes) that he should get back on his feet. At which times you are reminded can also be set (on the sofa from 21 o’clock on annoys that too).

After having tested some predecessors with the HW01, HW02 and Cardio Plus HX03W, I was also curious about the Lenovo HX06H. Although the hybrid models from Smartwatch and Fitnesstracker are often nothing half and nothing whole, so far the Lenovo models could convince us. The HX06H isn’t supposed to end the successful series, but in comparison to its predecessors the innovations are simply missing. And how about a product name that can be remembered?

The price is really great, you get a lot from Lenovo for that. But you also have to look one price class higher. For comparison: The Mi Band 4 costs twice as much, but also comes with a colour display, several sports modes, music control and swim tracking. If you don’t need the mentioned points, choose one of the Lenovo fitness trackers mentioned above (for design, functions about the same), but if you want more, go for the Mi Band.

Oh and please don’t try this anti-sleep mode while driving. Thank you.