8 Kommentare December 5, 2021by Thorben
Hey, guys! Just a heads up: The linked offer is already a bit older and the price of the gadget might have changed or it might not be available anymore.

In October 2021, Apple introduced the latest generation of their very popular wireless in-ears: the AirPods 3. They are like a mix of AirPods and AirPods Pro, but continue to rely on the half-in-ear design. You do not have to wait long for clones from China, but this one comes from Lenovo. The Lenovo LP40s were even on the market before the AirPods 3 were released. 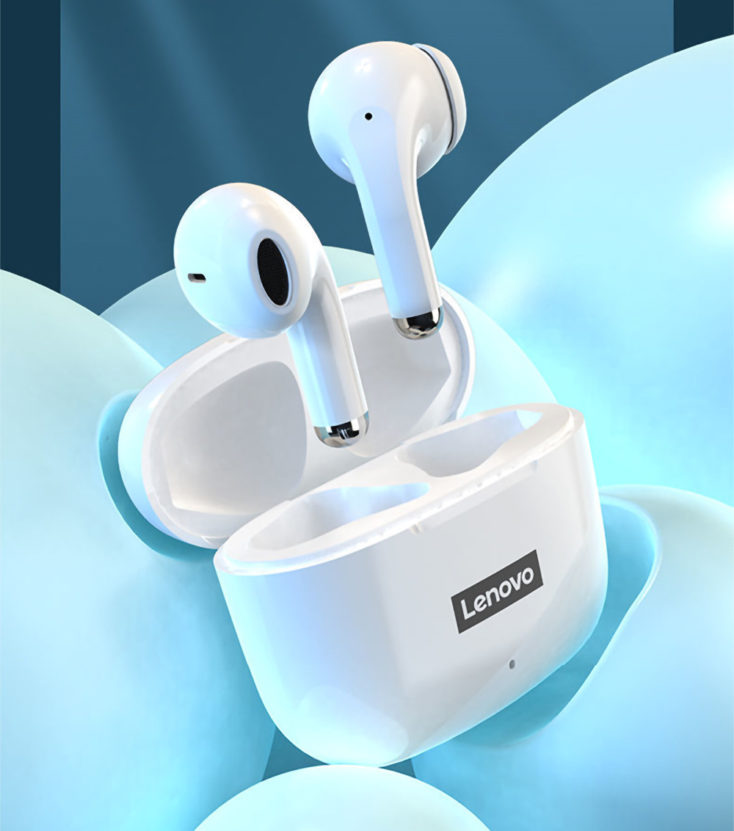 In fact, the Lenovo LP40s have already appeared in China stores before the AirPods 3 were released, way before. However, that should not be a coincidence and Apple did not steal from Lenovo, since the AirPods 3 design had been circulating on the web for months before the release. Thus, Lenovo opts for the half-in-ear design with a slightly lowered head, which should improve the hold in the ear a bit. The trunk is comparable to the AirPods Pro, Freebuds Pro or Life P2 Mini and the headphones are available in black as well as white. However, Lenovo has come up with a small “special feature” because the LP40s could almost pass for in-ear headphones. Finally, ear pads are included, but only very small ones, similar to the 1More ComfoBuds 2. This improves the fit a bit and closes the ear canal a bit better to create more pressure in the bass range. The sound should deliver in the sufficient range despite all that. Despite Lenovo being the manufacturer, these are $15 headphones, and the sound can be described as “okay” throughout. Dynamic 13 mm drivers are used for this. You could say that they still sound better than the AirPods 2, but the AirPods 3 are supposed to be a big sound upgrade. However, the special feature of the Lenovo LP40, besides its design, is the touch controls. You can even change the volume on the handset with them, as well as pause and play the next or previous track. Bluetooth 5 is on board for connecting to the smartphone, and the AAC and SBC codecs are supported. A wear detection is also built in. The Lenovo adorns the color-matching case, which is equipped with a 500 mAh battery that should be enough for a runtime of 15 hours. The design of a headphone is certainly not the most important reason for the product, but it looks different for AirPod clones. The Lenovo LP40 looks very similar to the “original”, but it is not a cheap China fake, but comes from a renowned manufacturer. You get a lot for $15, especially the touch control is nice, although the Bluetooth codec selection is a bit poor. If the design is important or you need a replacement headphone, the LP40 is certainly a solid choice in this price range.