2 Kommentare January 19, 2021by Jens
Hey, guys! Just a heads up: The linked offer is already a bit older and the price of the gadget might have changed or it might not be available anymore.

Lenovo and the display manufacturer NEC presented a kind of portable gaming console at this year’s CES. Strictly speaking, the NEC Lavie Mini is a mini PC in handheld format that roughly resembles the Nintendo Switch in terms of design. 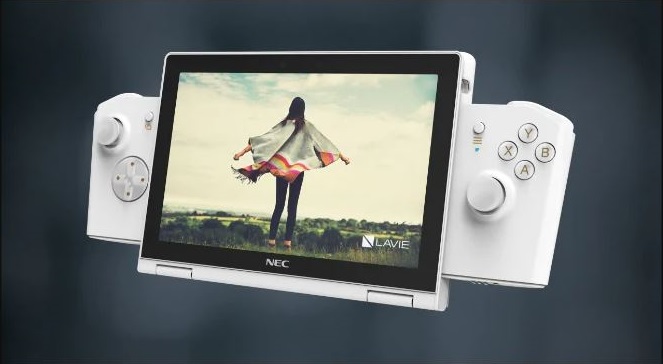 It’s already clear at first glance that the focus here is obviously on gaming. However, the controllers on the left and right are only optional attachments that can be plugged in when needed and turn the notebook into a console. That’s right, in its “normal” form the NEC Lavie Mini is simply a small notebook.

You can’t see the keyboard on the picture above, because it can be folded back. This can still be seen on the hinges on the underside. Thus, the device can probably also be called a convertible, i.e. a laptop that turns into a tablet when needed. This can be clearly seen in the picture below. 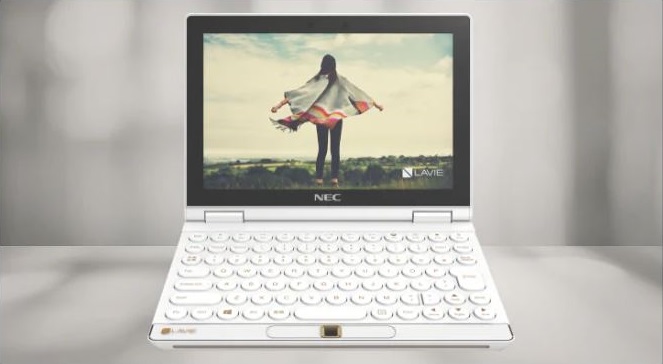 The display is an 8-inch touchscreen with Full HD resolution (1920 x 1080p). An Intel Core i7-1180G7 processor with 4.4 GHz works inside, and an Intel Iris Xe Graphics G7 serves as the GPU. Of course, there is not enough performance for the latest AAA games, but it might be enough for older games and indie titles. In addition, there is 16 GB of working memory and a 256 GB SSD. A decent configuration for such a small device. Windows 10 is installed as the operating system.

We find two USB-C and one USB-A port, both with USB 3.1. Additionally, there is an HDMI port (2.0) and a micro-SD slot. The mini-PC is of course WLAN-enabled and also has Bluetooth 5.1.

As someone who likes to play a lot of games myself (nowadays they call them “gamers”), I’m personally excited by the idea. While the big AAA titles are becoming more and more graphically elaborate and are best enjoyed on the big screen, there are now also plenty of very good indie titles that are perfect for a handheld console. This is also one reason for the continued success of the Nintendo Switch, which has long since become the platform for indie games. Again, I can only report from myself, but I now prefer to get smaller or less graphically demanding games on the Switch than on Steam, despite the premium.

A mini-PC that lets me play my entire Steam library on the go would of course be a game-changer (pun intended). Especially since the TV can easily be connected as a second screen, and there is even an extra docking station. Together with a Bluetooth controller, you would have the same flexibility as with the Switch.

I don’t want to praise the device too highly yet, though. Price and release date are not yet known. It can’t be ruled out that the NEC Lavie Mini won’t get beyond the status of a concept device. And even if it appears at a reasonable price, that’s still no guarantee that it will be a good product. So wait and see. Of course, I’m also eager to hear your thoughts on it, so feel free to let us know in the comments.