Lenovo presents the first notebook with a foldable display!

5 Kommentare May 18, 2019by Jens
Hey, guys! Just a heads up: The linked offer is already a bit older and the price of the gadget might have changed or it might not be available anymore.

While some manufacturers are working on the foldable smartphone display and have a lot to improve ( right, Samsung? *wink wink*) Lenovo already goes a step further. As part of the ThinkPad X1 series, the first foldable laptop display was introduced. 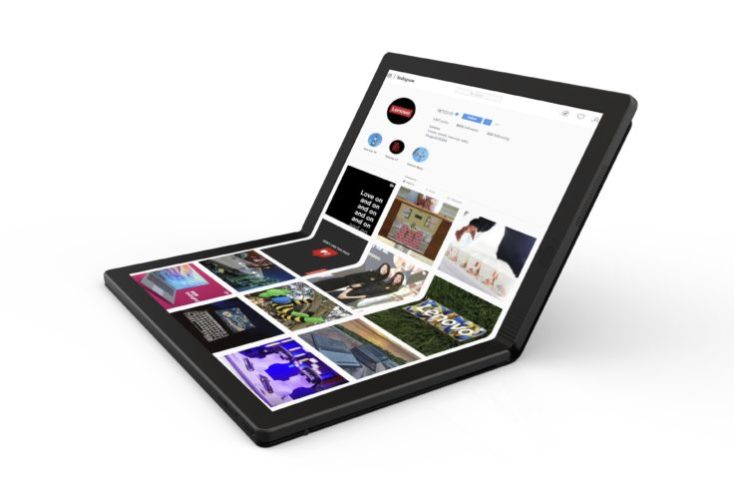 Foldable screens on smartphones are being promoted by some as the next big step. Examples include the Royole Flexpai and the Samsung Galaxy Fold. Therefore, it was only logical that this trend would also be introduced into laptops. The Lenovo model has a 13.3 inch OLED display with a resolution of 1920 x 1440 pixels that folds in the middle. The concept is briefly presented in this short teaser video from Lenovo.

Theoretically, you can also hold the device like a book and display two pages side by side in portrait format. And when fully collapsed, it takes up only half the space of a tablet of the same size. And yes, the notebook can be folded completely (180°) inwards. It is also protected by a leather sleeve.

The Verge has already tried out the prototype that Lenovo has now introduced. Here in the video they already show the different usage possibilities. Even if the concept isn’t fully developed by a long shot, it all looks pretty good and gives hope.

Apart from the preliminary design, however, hardly anything is known yet. The weight will probably remain below one kilogram, the processor will come from Intel. Which specs the new ThinkPad X1 (actually called tablet or laptop?) will have exactly is also still a secret. There’s also no price yet, although it’s probably the most interesting one for many people. Since it is an absolute novelty so far, it should not become quite cheap.

The publication date so far has only been 2020. Until then there is still some time, in which more information might become known bit by bit. Perhaps in the meantime even other manufacturers will jump on the train and present their own models. What do you think about the concept? Can you imagine such a tablet with a foldable display?