0 Kommentare December 9, 2021by Henning
Hey, guys! Just a heads up: The linked offer is already a bit older and the price of the gadget might have changed or it might not be available anymore. 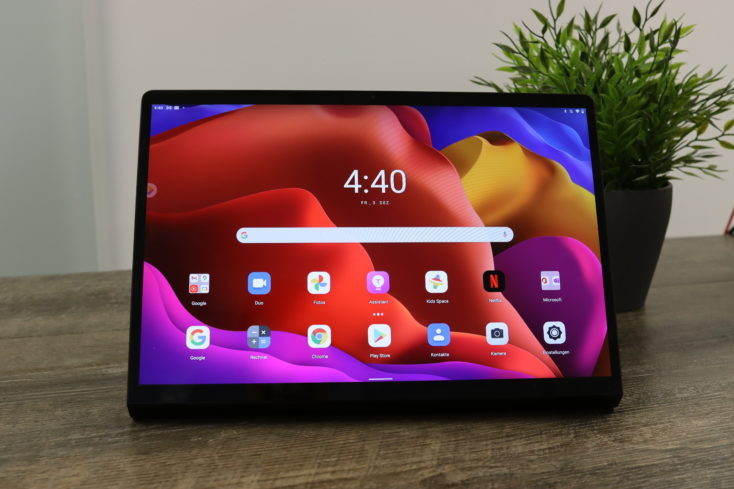 Size matters when it comes to the tablet, for many at least. The 10-inch diagonal has probably become the industry standard, which does not matter much for the Lenovo Yoga Pad Pro. It measures a full 13 inches diagonally, which puts it relatively alone alongside the Samsung Galaxy Tab FE and the large iPad Pro. After all, that is the size of a notebook. The screen’s edges are pleasantly thin, only the chin is noticeably thicker. 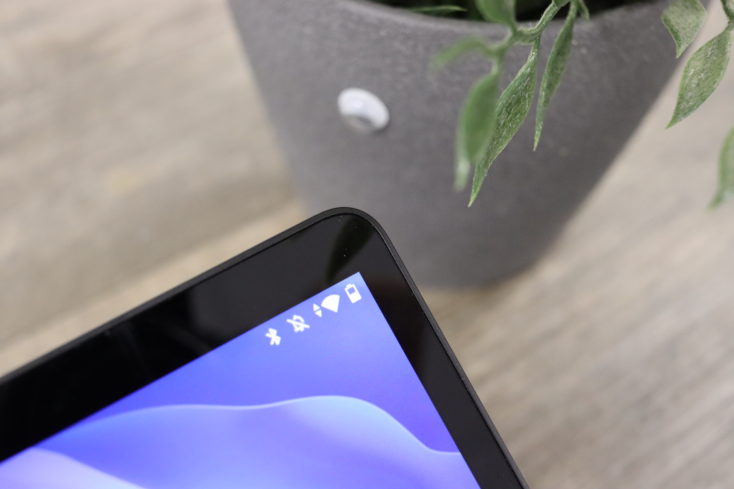 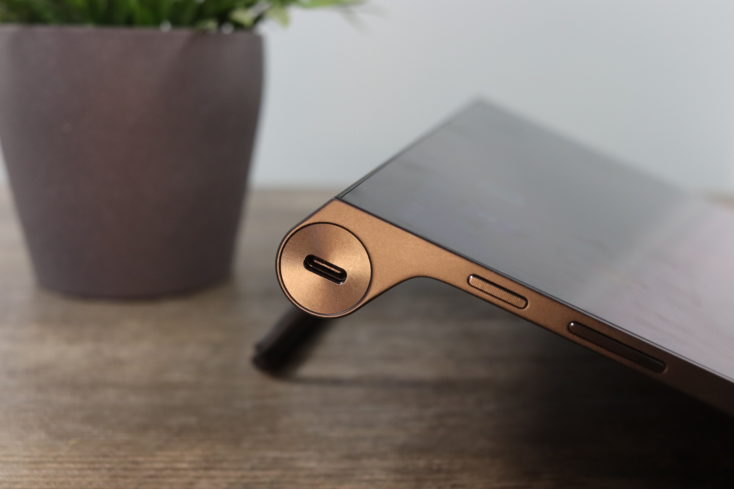 It is relatively easy to determine where the chin is on Lenovo’s Yoga Pad Pro, because the Yoga Pad Pro stands. It virtually does the sun salutation, because there is a kind of carrying handle on the back that also functions as a kickstand. This metal handle with a silicone coating allows the Yoga Pad Pro to stand at a relatively freely selectable angle between 25° and 90°. However, the base had to offer a bit more standing area and be thicker for this. A micro-HDMI port is located on the left and a USB-C port on the right. However, you can also place the chin on top and use the tablet this way. The tablet can withstand a certain pressure while writing. 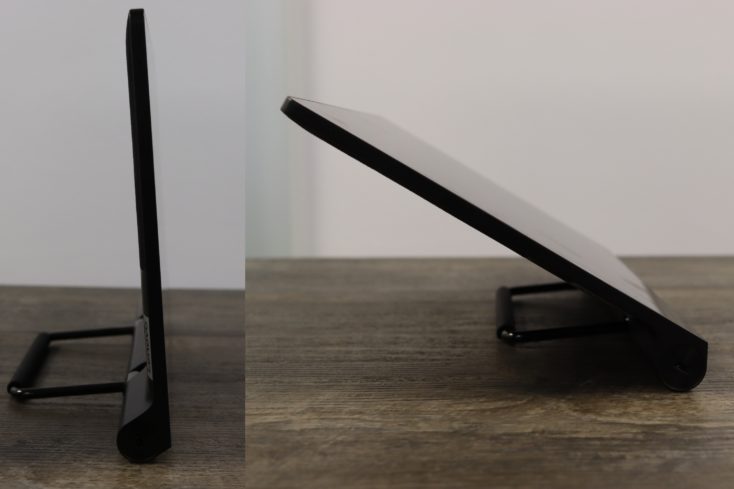 Half of the back is made of black plastic, and the other half is made of suede. The casing’s bezel is beveled, as is the case with almost all tablets nowadays, which emphasizes the modern look. While most of the case is only 6.9 mm thick, it measures an impressive 24.9 mm at the bottom. Thus, it can never lie completely flat on the table, but always lies at an angle of 4 degrees. I have nothing to complain about in terms of workmanship, and Lenovo is even thinking about a CE label. However, the Yoga Pad Pro is unfortunately quite heavy with 890 g. 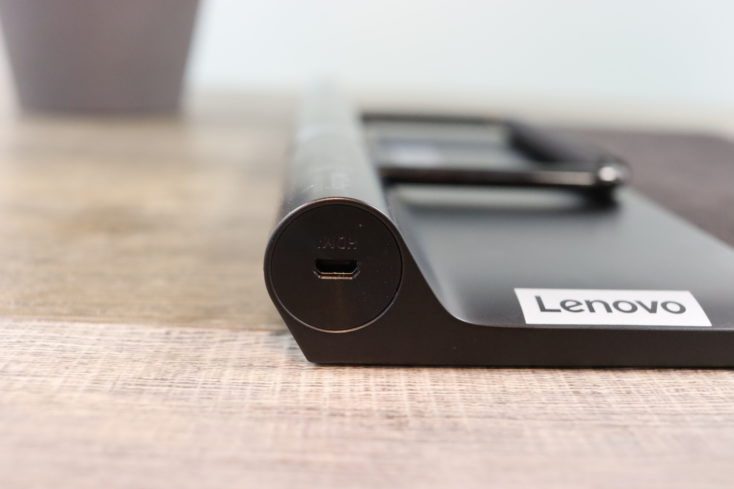 The aforementioned 13-inch display is the center of attention here. In contrast to the Lenovo XiaoXin Pad Pro, we unfortunately do not opt for an AMOLED, but for an LTPS LCD display with a 2160 x 1350 p resolution. The resulting pixel density of 196 ppi is below average. In the 12.9″ iPad Pro, you get a sharpness of 265 ppi. Numbers are just numbers, though, and so I cannot criticize much about the sharpness. Even pixel peepers should get their money’s worth here, since fonts and icons are still sharp enough. The resolution is also more than sufficient for streaming movies for my taste. 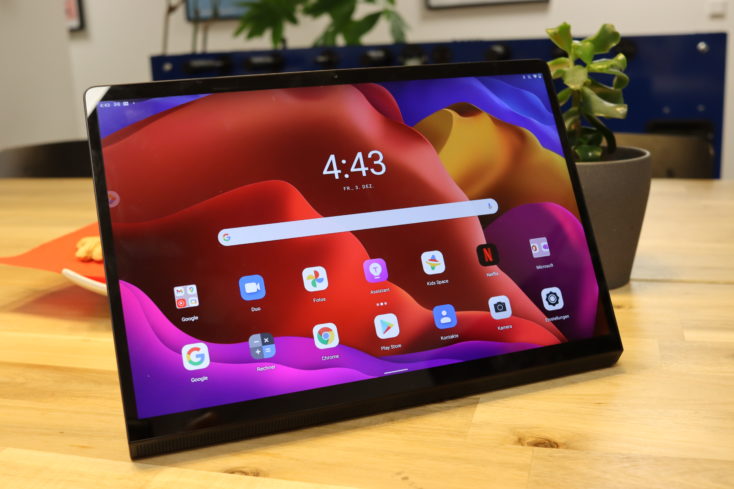 Depending on the application, the Lenovo Yoga Pad can also be used outdoors, for which the screen’s brightness is crucial. The brightness of 400 nits is also rather average; a Xiaomi Pad 5 has 100 nits more. Nevertheless, the user benefits from a relatively high-contrast LC display with rich colors, so it only reflects too much in a lot of sunlight. If you have this case more often, you can also order a matte display foil. Nevertheless, 500 or even 600 nits like the competition would have been good for the Yoga Pad Pro. 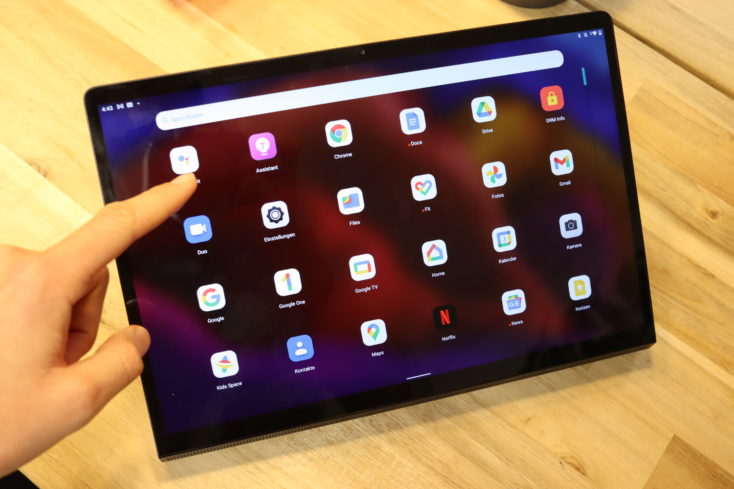 The touchscreen reacts well and quickly, so you always have the feeling that the inputs are immediately implemented. Somehow, the interaction with such a stationary screen is still a bit different, but the kickstand offers enough resistance. The only thing you have to be careful of is not charging the tablet too quickly when you want to use it at the same time. With a 65W charger, the touchscreen only reacted with a long delay or sometimes not at all in the test. 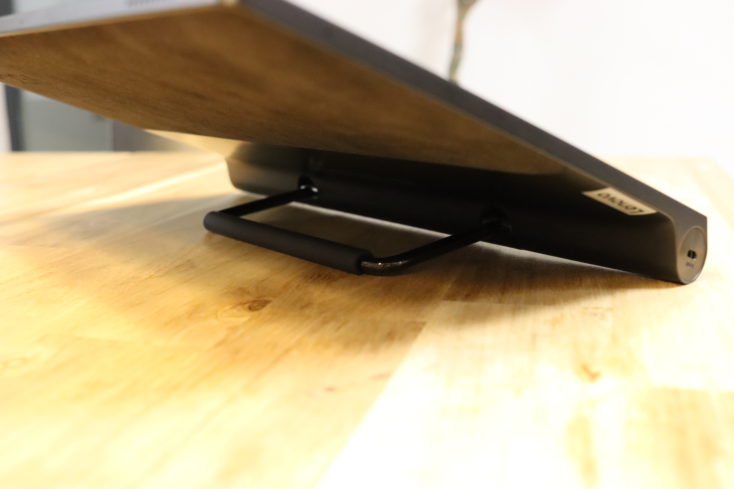 Is the Lenovo Yoga Pad Pro suitable for gaming?

What makes the Lenovo Yoga Pad Pro or Yoga Tab 13 so interesting for many is not only the unique design, but also the processor. The Qualcomm Snapdragon 870 finally provides enough power; tablets are often fobbed off with weaker CPUs in this respect. The SD870 is also found in the POCO F3 and is more or less the Snapdragon 865, the flagship processor of the last generation. With a clock rate of up to 3.2 GHz, there is enough power even for working, but also for gaming as well as video and image editing. There is even a generous 8 GB of working memory and 256 GB of mass storage. However, a micro-SD port for memory expansion is missing. 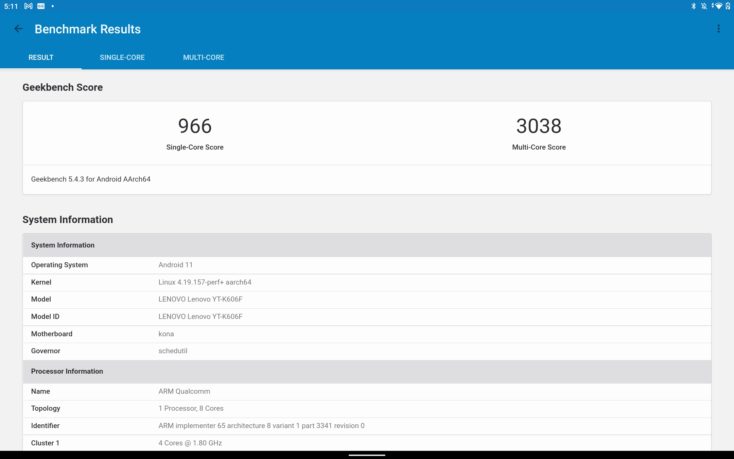 With 10,200 mAh, the battery is much bigger than in other tablets, but the size is also necessary for a 13-inch display. Nevertheless, that is still a few mAh more than in Samsung’s Galaxy Tab S7 FE with a 10,090 mAh battery, for example. The consumption is really low especially in standby, so you can use the tablet for one or two hours over the week. However, you should get the charger out again after about 5 to 6 hours of intensive use and high brightness. The charger charges with 30 Watts and manages to recharge the Lenovo Yoga Pad Pro in a bit more than two hours.

Lenovo apparently does not think much of tablet photography either and opts for only one front-facing camera in the casing. It offers an 8-megapixel resolution, which is enough for a quick selfie or video calls, but not more. It probably also plays a bigger role for face unlocking. Since there is no fingerprint sensor installed, the camera can be used for a quick unlock. However, this is not as secure as a fingerprint sensor or FaceID in the iPad Pro. Users who work professionally should rather protect their data with a password. 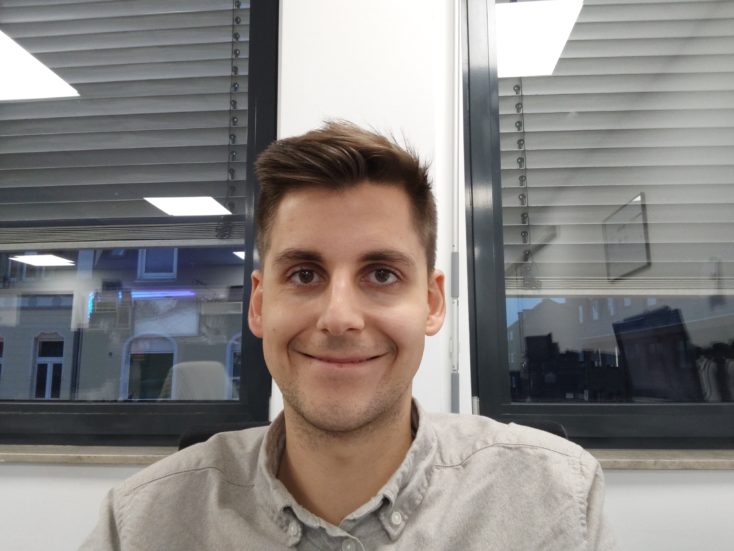 The Lenovo Yoga Pad Pro is WiFi-only, there is no LTE version, not even as Lenovo Tab 13. In return, the manufacturer equips it with Dual Band ax-WiFi, i.e. WiFi 6, and does not forgo the latest Bluetooth 5.2. GPS or NFC are not available, though.

However, the physical ports are more exciting. Below the function keys on the right side is a USB-C Type 3.1 port on the axis that not only allows charging, but also connecting an external monitor. Speaking of monitors: A micro-HDMI port is located on the opposite side. There is no jack, SIM slot or micro-SD slot.

As mentioned at the beginning, the Lenovo Yoga Pad Pro (reviewed here) is the Chinese version of the Lenovo Yoga Tab 13. Like the Lenovo XiaoXin Pad Pro, it has a counterpart with global ROM. The online store Banggood takes advantage of this and ships the Yoga Pad Pro with a flashed Global ROM. After the first update, you even get Android 11, which is completely in German and equipped with all relevant Google services. However, the Google Play Store is not officially certified. It also does not pass the Safetynet test, but banking apps can still be opened and started, for example. 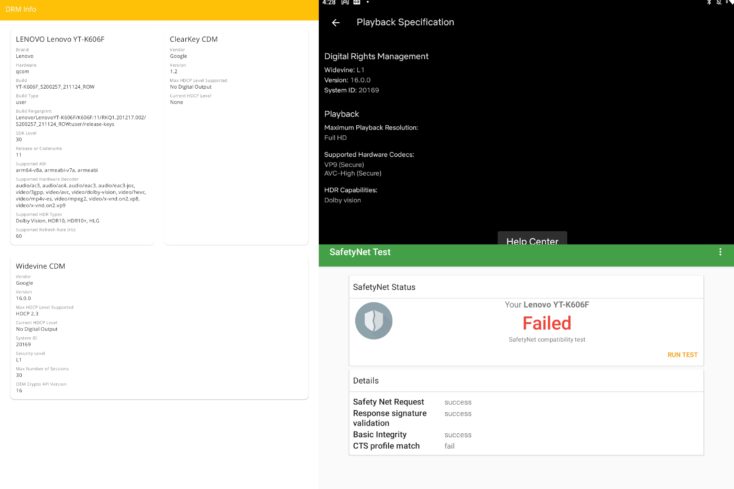 Lenovo’s interface is relatively close to Stock Google, which is relatively pure Android. There is hardly any bloatware, and third-party apps are only available from Microsoft with the Office suite. Otherwise, the Google services are on it and a few own apps like audio recorder or calculator. This is a so-called store ROM from Banggood, which we did not have any problems with in the test and was even surprised by the update to Android 11. If you want to flash the device yourself, you can also use the official Lenovo Rescue and Smart Assisstant. 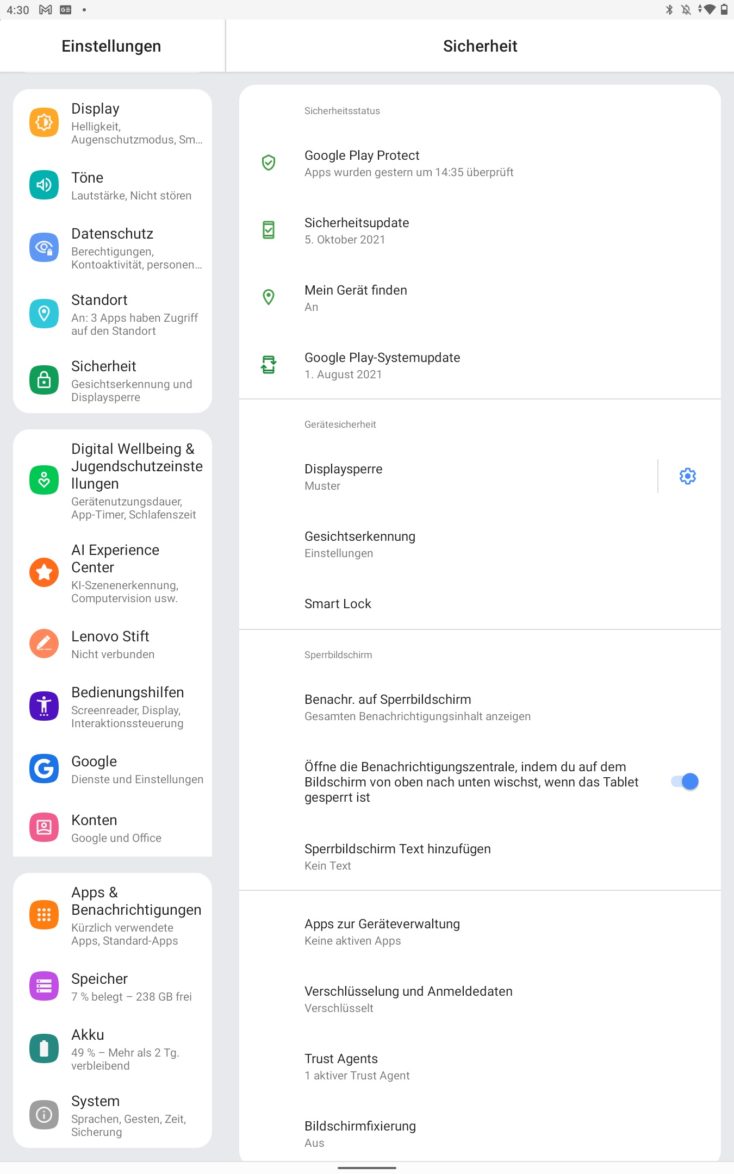 Use as a media tablet

If you want to use the Lenovo Yoga Pad Pro primarily as a media tablet, you have some good arguments for it. Besides the 13-inch display, you will of course benefit from the stand, so you can, for example, put it in bed and even adjust the angle. The Android operating system also offers Widevine Level 1, so you can watch Netflix in Full HD. Prime Video or Disney Plus are even available in the Play Store, and Prime Video can also be used in Full HD. YouTube videos are viewable in 1440p. 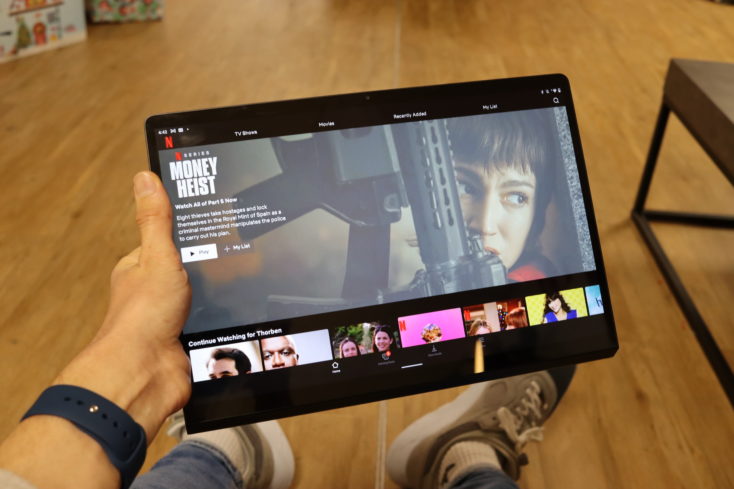 You can also rely on the sound. The YogaPad Pro is equipped with two 2.5W and two 2W speakers from JBL. Thanks to the tablet’s build, the quad-speaker setup produces a voluminous sound, and the sound is full even in the low frequency range. Non-audiophiles would certainly use the tablet as a Bluetooth speaker replacement in the apartment, but it is really fun especially for movies or YouTube. 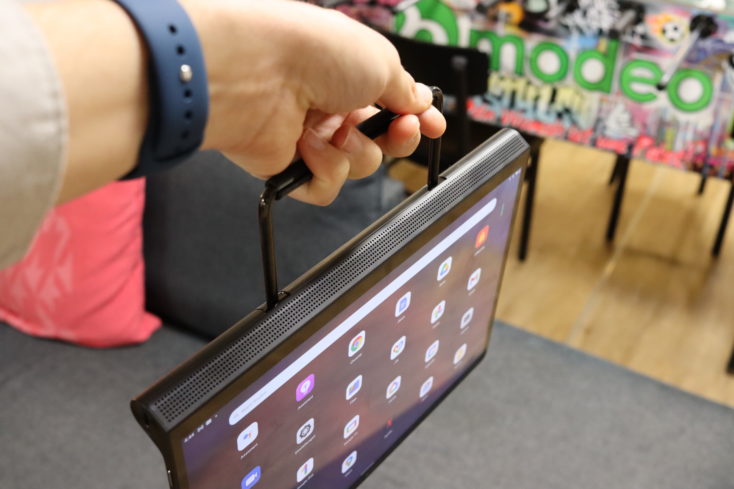 Due to its special shape and size, the Lenovo Yoga Pad Pro is theoretically also suitable as an office tablet, depending on the workflow. However, Lenovo puts a slight crimp in the equation. An external monitor can be connected via the USB-C port and the micro-HDMI port, but it unfortunately only mirrors the tablet. You cannot expand the screen, which would be a real added value. Furthermore, the tablet has a different aspect ratio than most screens. 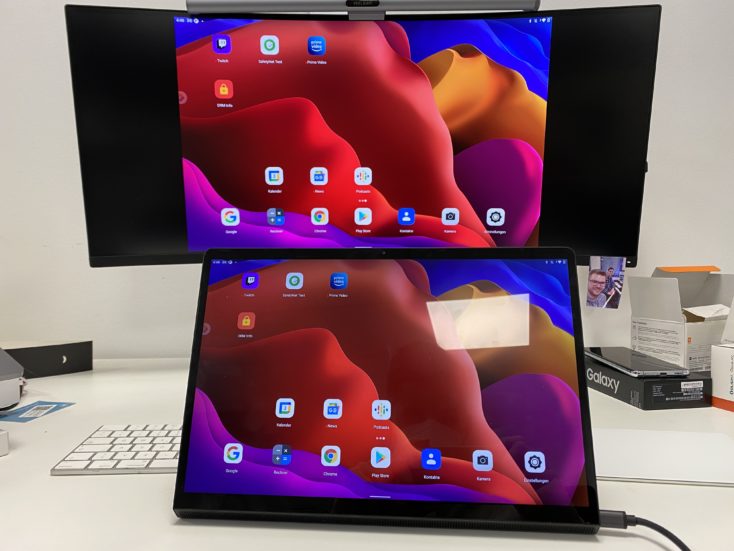 The Android operating system also lacks a corresponding desktop mode, which would be useful for adequate office use. However, you can of course connect the mouse and keyboard via Bluetooth, and storage devices are also recognized and can be managed via Google Files. However, Lenovo’s XiaoXin Pad Pro has a corresponding desktop mode in the settings, which might still be available via a software update.

At least you can use the micro-HDMI port to use the Lenovo Yoga Pad Pro as a second monitor. Unfortunately, the touchscreen capability is not available then.

The Lenovo Yoga Pad Pro is definitely a niche gadget. Not everyone wants a 13-inch tablet and not everyone accepts a significantly thicker device for the stand. Looking at the kilogram limit, the tablet is also relatively heavy. However, those who do not mind this get a pretty good overall package that scores especially with performance, battery life, display and the special design. The speakers are also a small highlight, and I would definitely recommend it as a media tablet.

Unfortunately, it does not fully exploit its potential as an office tablet, since the screen extension and a dedicated desktop mode are missing. You have to order Lenovo’s Precision Pen 2 for drawing, which costs another ~$68 (60€). Unfortunately, we could not test it.

Is it worth importing the Lenovo Yoga Pad Pro instead of buying the Yoga Tab 13? In our eyes it is. The price of the Yoga Tab 13 varies between ~$735 (650€) and $792 (700€). The import price is between 550€ and 600€ with a voucher, which saves you 100€ and actually hardly has to make a compromise. Nevertheless, fast delivery and service are also worth the money, so you can definitely go for the Yoga Tab 13. Nevertheless, I would recommend the Lenovo XiaoXin Pad Pro to most people, because you can get a strong all-round tablet for around 300€, which is definitely worth the import.