0 Kommentare May 27, 2020by Jens
Hey, guys! Just a heads up: The linked offer is already a bit older and the price of the gadget might have changed or it might not be available anymore.

The Longer Orange 30 is an SLA LCD printer and, as the name suggests, is not the manufacturer’s first model. Now we have a test device of the brand here for the first time and have already set up the printer. Here are the facts and figures about the Orange 30. 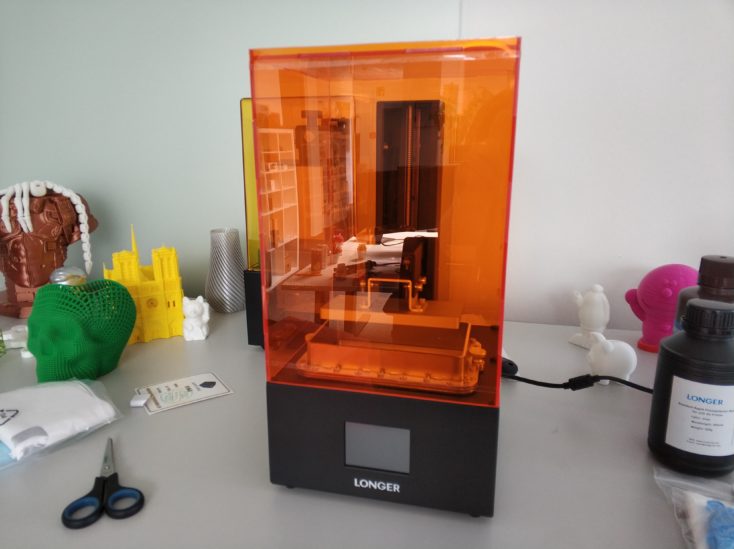 From the outside, there are actually hardly any differences between the various SLA printers. Even the Orange 30 is not much different, but it has a few peculiarities. For example, the cover here (for me, this is the first time on a printer) is not just one part. Instead, it has to be put together after unpacking and fixed with rubber bands. Admittedly this does not take long and probably saves costs in production and space during transport. It should serve its purpose just as well, so I won’t deduct any points for this.

The resin tray is screwed directly onto the printer and is made of metal. At the front there is a small touch display for operation, power supply, switch and USB slot are at the back. Other manufacturers especially place the switch and USB port on the side or even in front, so that they are easier to reach.

Resin itself is not included in the printer, but you can order it additionally. Either you use resin from Longer or another brand (but only 405nm), if you have some at home. The usual accessories are available. Metal spatula, filter for decanting the resin and gloves. As with all SLA printers, the following applies here as well: Use only with gloves, the resin (synthetic resin) irritates the skin and is not entirely harmless.

A feature that the manufacturer particularly emphasizes is the cooling as well as an automatic protection system against overheating. If the LEDs get too hot, the pressure is stopped and continued later. Admittedly, I don’t know how common this problem is. Hopefully a test will show whether this has a positive effect on the printing results.

Printing with the Longer Orange 30

It is an SLA printer with an LCD, which prints in the known method. The display has a 2K resolution and ensures a correspondingly high level of detail. Again for clarification: This is the display under the resin tray that hardens the print – not the touch display. 🙂 Therefore, the display resolution is quite important for the print here.

The minimum layer height is accordingly also 0.01 mm. At this value, the individual layers are actually no longer visible to the naked eye.

The print space of 120 x 68 x 170 mm is about the average for SLA printers, but the height of 17 cm is even above average. The printing speed is stated as 30 mm/h, whereby this value always depends on the slicer settings at the end.

The printer is supported by the slicing software ChiTuBox, but Longer also offers its own slicing software (LongerWave). This is included on a USB stick, together with test files, user manual and tutorial videos from setup to slicing and printing. The digital extras have never been so extensive with any other printer I have tested. Especially for newcomers to SLA-3D printing this is a pleasant help.

The Longer brand has been known to us for some time, and now we are testing one of their printers for the first time. I am curious to see how he will perform against Anycubic and Elegoo. In terms of price, it looks interesting at around $300. The mentioned specs all read well, too. If the prints meet our expectations, we might have another good option for a first SLA printer.