1 Kommentare July 12, 2018by Thorben
Hey, guys! Just a heads up: The linked offer is already a bit older and the price of the gadget might have changed or it might not be available anymore.

With the amount of smartphones from the Far East, where a new smartphone is introduced almost daily, a new one can quickly overlooked. When suddenly the Meizu 15 was in our mailbox, I was surprised. After a few days of testing I can only say: the Meizu 15 could be a real insider tip! 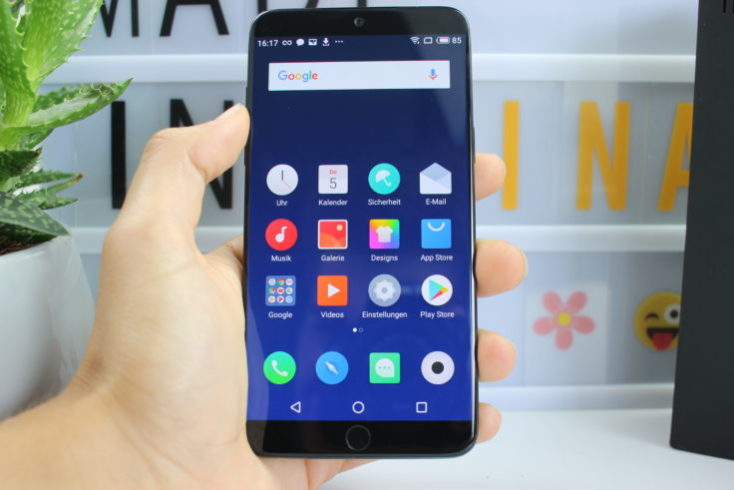 Two versions of the Meizu 15 series have been launched. The Meizu 15 and Meizu 15 Plus differ not only in size but also in processor. In our test it is the Meizu 15, the cheaper version.

Meizu 15 – against the trend

Call it oldschool or just against the trend. The Meizu M15 may not immediately be considered a 2018 smartphone. Why? It does not come in 18:9 aspect ratio but in the well-known 16:9 aspect ratio. You don’t really follow the trend of borderless design either. At least the upper and lower edges of the screen are relatively “normal”, while hardly any edges can be seen on the left and right. Another striking feature is the home button at the bottom of the screen, here called mBack. Since the fingerprint sensor is also located there, it reminds us a bit of the Apple devices. 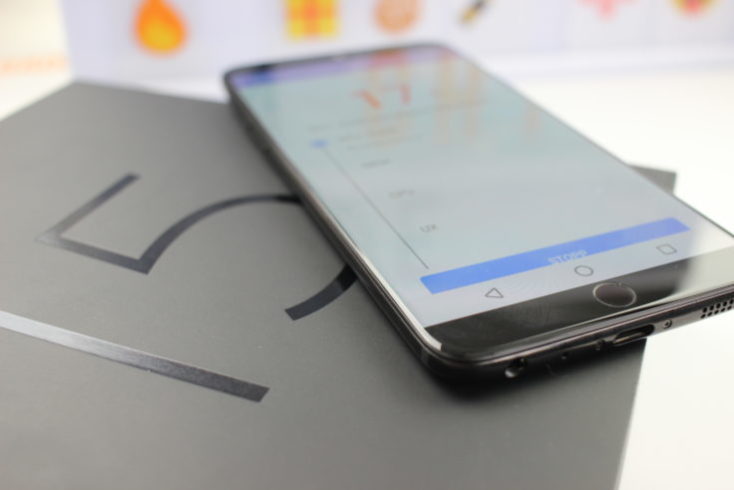 At first glance, one may not suspect that this is a 5.5-inch device, since the smartphone is actually quite “small”. At 143 x 72 x 7.25 mm and weighing only 152 g, it is just 5 mm longer and wider than an iPhone 8, for example. The thickness of just 7.25 mm is impressive and tops the recently introduced Xiaomi Mi 6X, albeit only minimally.

Compared to 5.5 inch smartphones like the Xiaomi Mi A1, the Meizu 15 is significantly smaller! That means: the Meizu 15 fits so well in the hand and still offers a rather large screen. Especially for the opponents of the modern 6 inch smartphones this is a ray of hope. Also from me the mobile phone gets full points in terms of “handling”!

You are spoilt for choice not only between two display sizes, but also in the colour scheme. Black, gold, white and blue (only for the Meizu 15) are available. As a nice detail there are the antenna strips, which almost appear in an Aztec pattern. The back is otherwise very simple and matt. The dual camera is centrally located in the upper third of the rear, vertically arranged. Below it is the flash.

Because of the low weight of the smartphone, the first thing you think of is a cheap workmanship. But no, Meizu combines an aluminium housing and stainless steel elements, even if the back feels more like plastic. The workmanship is therefore very good overall. The keys are so filigree embedded in the housing that they only protrude minimally and still provide a good pressure point. The transitions between the display and the housing frame are also almost seamless.

As the name suggests: the Meizu 15 Plus is bigger. This is due to the different display sizes. While the Meizu M15 is equipped with a 5.46 inch Full HD display, the Plus version 5.95″ is equipped with a 2K resolution. Both are Super AMOLED panels from Samsung. We work here with a pixel density of 403 ppi, i.e. pixels per inch. The contrast ratio is 10,000:1.

The fact that this is an AMOLED display naturally brings some advantages. In my eyes, the Always On display is a really cool feature, which we also know in the form of the Huami Amazfit Bip. In this mode, only individual pixels are illuminated when the screen is switched off, so that the time and date are displayed. In general, the screen is very colorful and rich in contrast, as you know it from Samsung screens. The display is still easy to read even in direct sunlight. Only the viewing angle stability is not quite as good as on the Xiaomi Mi 8, which is also equipped with an AMOLED display.

Both variants differ not only in size, but also in processor selection. The smaller Meizu 15 comes with the Snapdragon 660 processor, which is finally gaining more popularity. Besides the Mi Note 3 and the Elephone U Pro, the Mi 6X also got this processor. And that’s good news, after all, eight Kryo 260 cores with 2 GHz clock frequency provide plenty of power! It has 4 GB RAM, enriched with either 64 GB or 128 GB internal memory. 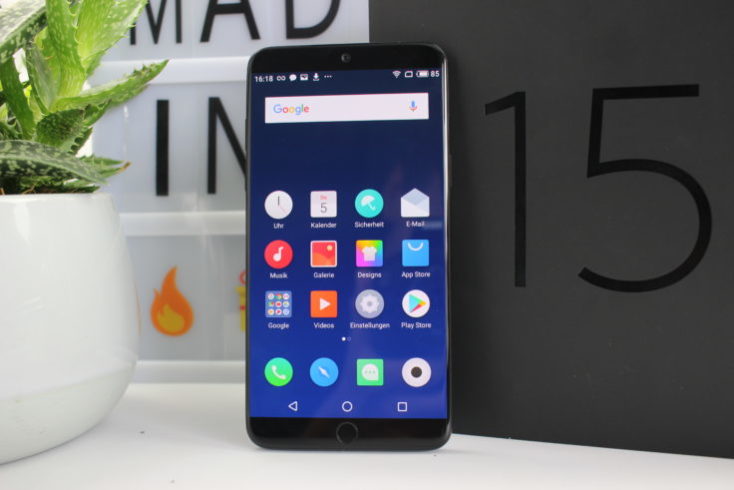 Accordingly, the performance of the Meizu 15 is definitely above average. You can see that the 15 simply has a little more power under the hood than an average smartphone. That means you can play games easily and apps open and close quickly. Only in multitasking you have to be satisfied with 4 GB RAM. This actually sounds like enough RAM, but the Flyme surface takes up almost half of it. Here I like the Xiaomi Mi 6X slightly better, even if the differences are really small.

Camera – not perfect, but good!

On the back is a dual camera, which, contrary to the trend, is vertical but centrally arranged. The primary sensor is the Sony IMX380, with a 12 megapixel resolution. The secondary sensor also comes from Sony: the IMX350 is a 20 megapixel camera. We work here with a ƒ/1.8 aperture and the camera app offers a portrait mode, video recording (also in slow motion & fast motion) and a pro mode. Under the two camera elements there is also a ring flash consisting of six LEDs. 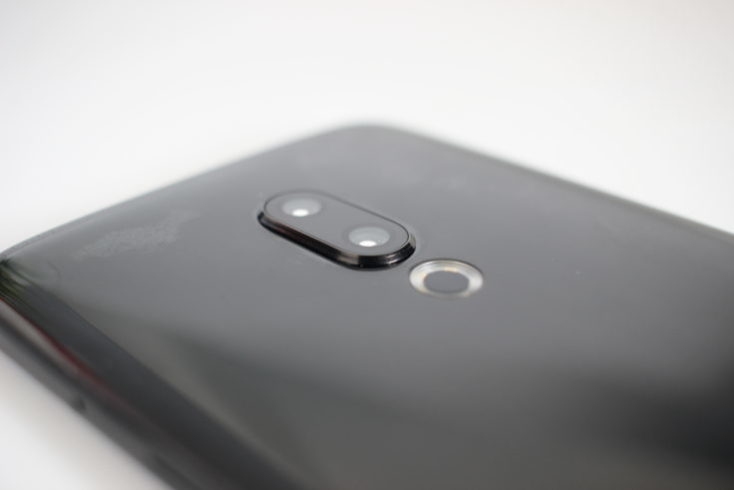 The photos from the camera are basically good. I like the colours, even if they tend to be a bit saturated. The camera resolves quickly, the autofocus works reliably at least in normal photo mode. I think a little more would have been possible. Especially in the background (example 1: tree in the background) some details are lost. But the camera triggers quickly and manages to capture important snapshots (example 1: Julian laughing). Some of the photos are a little underexposed, but this is not the rule. 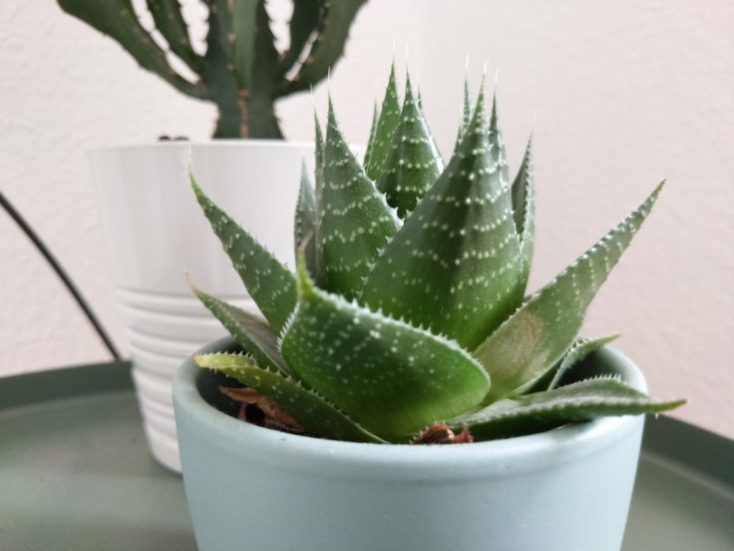 Portrait mode actually works quite well at 95%. Group photos are not as good as with the Honor 10, but the object to be focused is well separated from the background. I think that Xiaomi still solves this problem best with the Mi Mix 2S, but Meizu is already doing an above-average job here. “The smartphone recognizes “smooth” edges well, it becomes a bit more difficult with hair. Portrait mode also works well for objects. 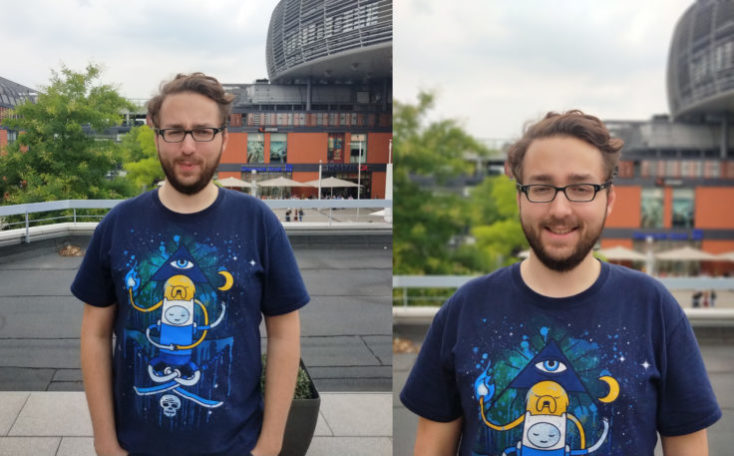 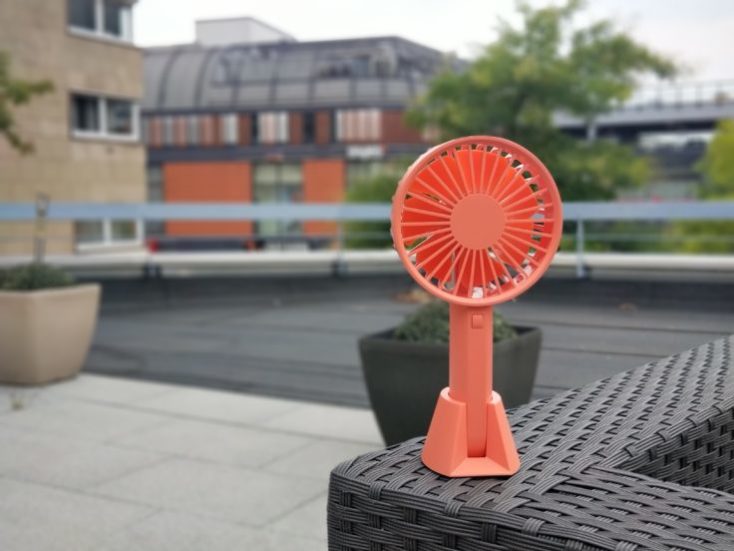 The front camera also consists of a 20 megapixel sensor, but no portrait mode is available. I really like the selfies with the front camera. 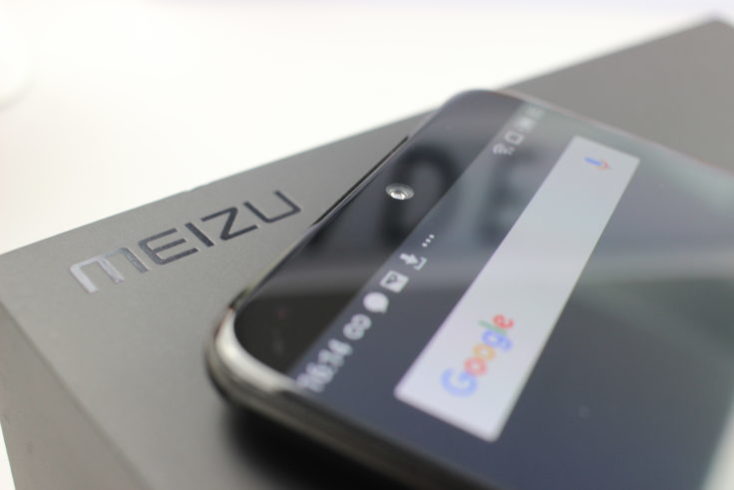 The focus is quick, skin tones are well captured and the 20 megapixel resolution is also clearly visible. The selfie camera of the Meizu 15 is not quite as impressive as the Mi 8, but the Mi 8 is also slightly more expensive. 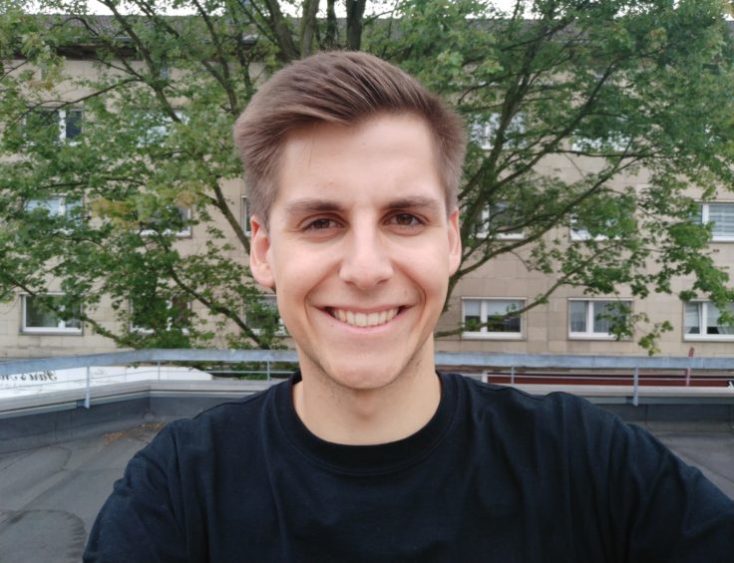 As the headline already reveals, the Meizu 15 manages to round off its already good overall package. The fingerprint sensor is located on the front of the mBack button. Even if the area is comparatively small, the sensor functions quickly and reliably. Especially when the display is already on, it unlocks as fast as an arrow. But it also works great from sleep mode. Since it is a matter of milliseconds, it is difficult to compare the speed. Those who know Xiaomi’s fingerprint sensor will not be disappointed by Meizu either.

Plus Face Unlock. You can also unlock the Meizu 15 with your face. This also works well and quite confidently, but a little slower than with the Xiaomi models. A big plus: You can use the fingerprint sensor and Face Unlock at the same time!

The Meizu 15 also works with stereo speakers. That means we listen to music via a loudspeaker that is still above the front camera and via the loudspeaker that is located in the lower edge of the housing – that’s what you hear. We liked the sound of the speakers, because it sounded rich and relatively three-dimensional.

Even with Global Version

The very good impression so far is further confirmed. USB Type-C for charging the battery, plus a 3.5 mm jack connector. It also supports mCharge, Meizu’s in-house fast charging standard with up to 24W. So far we have not been able to determine exactly how long the 3,000 mAh battery will last. This is a value that we will definitely be submitting later, as soon as we can let the benchmark run. 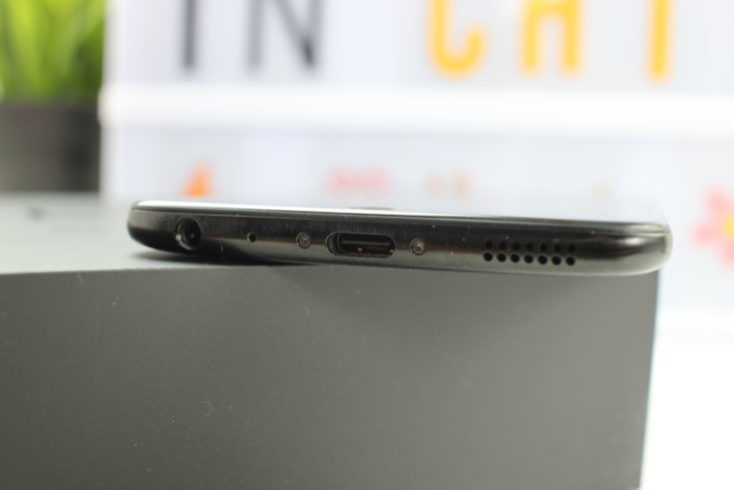 We had already written off the Meizu 15 after the presentation, since no Global Version was planned. Apparently Meizu has changed his mind, because Meizu 15 comes with Global ROM and LTE. Flyme 7.0 is a relatively strongly adapted operating system and resembles MIUI. There are some apps developed by Meizu. But this doesn’t seem like bloatware to us, but more like practical apps. These include a migration assistant and a toolbox with a flashlight, decibel meter and compass. The Google services including Play Store are also pre-installed.

Besides LTE we also have 802.11 a/b/g/n/ac Dual Band WiFi, Bluetooth 4.2, GPS, GLONASS and BDS. Bluetooth 5.0 would still have been possible thanks to the Snapdragon 660, but unfortunately Meizu decides against it.

I’ll make it short: We all really like the Meizu 15 here! This is especially due to the very handy size of the smartphone. Added to this is a very solid performance, good camera results and all the extras including LTE and multilingual operating system. What is the Meizu 15 doing wrong? Nothing, really. I must be honest with you. Only the operating system could be criticized. Since the battery is quite small at 3,000 mAh, this could result in an average battery life. However, we still need to test this more closely and will add long-term experience to the report.

Also the price is still an issue – for about $300 I would recommend the smartphone without hesitation. The Meizu 15 attacks the middle class, where Xiaomi is still stumbling a bit. Perhaps the UMIDIGI Z2 Pro could be the topic of conversation here. However, the Meizu 15 will have one thing ahead of all these smartphones: this good manageability due to its small form factor.