0 Kommentare January 23, 2019by Tim
Hey, guys! Just a heads up: The linked offer is already a bit older and the price of the gadget might have changed or it might not be available anymore.

Compared to the Anker Soundcore Liberty Air or the TicPods Free, the Meizu POP true wireless In-Ear has no AirPod design. The Meizu POP In-Ears can’t deny a certain similarity to another “premium headphone”, the Bang & Olufsen BeoPlay E8. Find out how the wireless Bluetooth In-Ear performs in this review. 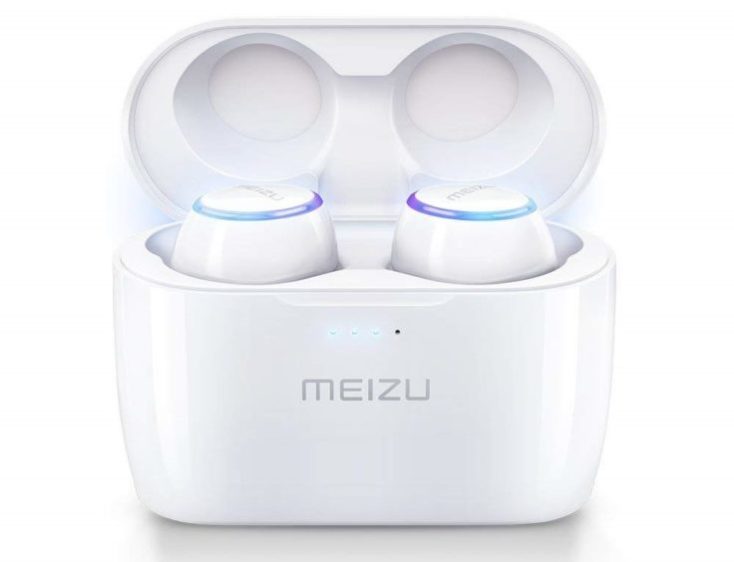 With the packaging, they might have taken some inspiration from Apple ? . Just like the AirPods, the Meizu POPs come in a small, white box with the handsets on it. The cardboard survived the long way from China to my desk without any damage. 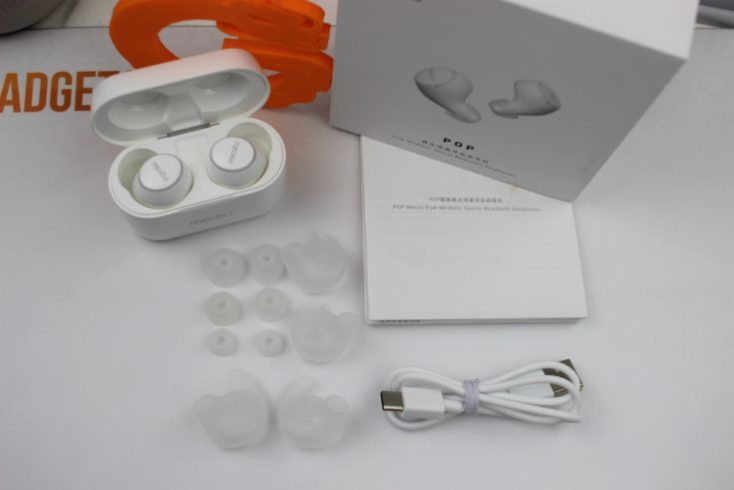 After opening the box, the loading box in which the in-ears are lying immediately catches your eye. The accessories also include two pairs of earhooks, three pairs of ear pads, a USB-C charging cable and a manual in Chinese and English. Earhooks are the absolute exception with true wireless in-ear headphones.

As mentioned at the beginning, the MEIZU POP headphones made me think directly of the Bang & Olufsen BeoPlay E8. At least in terms of design and size, the Meizu POPs are similar to the Bang & Olufsen BeoPlay E8. It’s nice that Meizu opted for a bud design and not for an “AirPod” design. In my opinion there are more than enough of them on the market now, especially since Xiaomi now follows with the Mi Air Bluetooth headset. 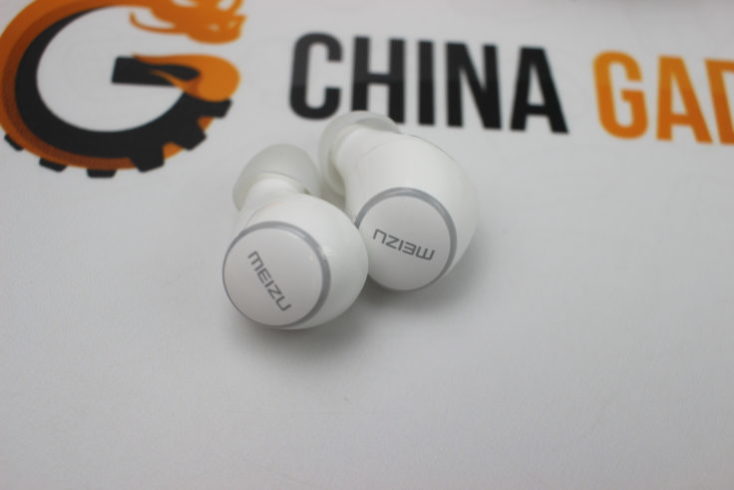 The loading box of the Meizu Pop has little to do with the Bang & Olufsen Beoplay E8, but reminds me more of the AirPods. You notice that Meizu doesn’t try to imitate a certain headphone or a certain brand with the POP In-Ears. Rather, they have informed themselves about competing models and try to form the best of everything the market has to offer into their own interpretation, which in my opinion is anything but reprehensible. 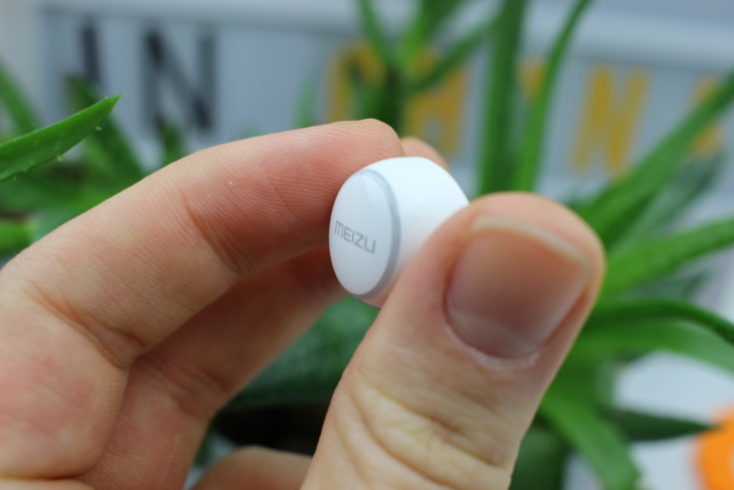 With dimensions of 61.3 x 42.7 mm, the loading box corresponds to an average size. Including the handset, it weighs 57.3 g and is therefore compact and light – perfect for travelling! One receiver of the Meizu POP weighs 5.8 g. Compared to the Anker Soundcore Liberty Air, this is 0.3 g more, but I would describe the weight as average.

The dimensions of the headphones are about 20 x 15 x 18.4 mm at the largest points, but they also don’t look clunky and in my opinion are less noticeable in the ear than any Apple design clone. As always, this is a matter of taste.

There is nothing wrong with the processing and the material used for the headphones. The Meizu POP are made of a light and robust plastic, which proved to be easy to clean – very nice! Unfortunately the headphones are only available in white, at least an alternative in black would have been very welcome.

Inside the Meizu Pop beat, as in the Anker Soundcore Liberty Air, each a dynamic graph driver with a diameter of 6 mm. In the test the Meizu POP didn’t make it easy for me. It’s not an all-rounder for my sense of sound, it really depends on your personal taste in music.

In general it can be said that the Meizu POP, for a dynamic single driver, has a comparatively clear tweeter. A feat that many low quality or low priced dynamic drivers do not manage well. The strength of this type of loudspeaker lies more in the bass. I can’t complain about the midrange either. Compared to the tweeter it is emphasized in a balanced ratio, so the high and mid frequencies form a nice unit, which I like very much.

In the bass range it gets a bit more difficult. Although the bass is present in a solid measure, it is superficial and has only little draught. So there is only little pressure in the ear and subliminal subbass is missing completely. As a result, the Meizu POP is absolutely not suitable for my private musical taste.

For music styles like EDM, RnB or HipHop, whose “beats” are usually created on the computer and a rich bass line is an enormously important stylistic device, the Meizu POP is only conditionally suitable. Although the genres are nice to listen to with these headphones, the sound seems to me too unspectacular and almost a bit boring.

It’s different with music styles like pop, jazz, acoustic or recorded concerts. Here, the low frequency offered by the Meizu POP is perfectly sufficient and it’s even pleasant that the bass is less in focus, in my opinion. Concerts sound realistic and the headphones have a nice focus on instruments and voices.

After the sound test in everyday life it seems as if Meizu didn’t choose the name “POP” by chance. The headphones are just the right solution for lovers of “natural” music recorded with instruments in the studio or at concerts. For bass lovers who really need the “vibrations”, I would recommend the Anker Soundcore Liberty Air.

As I made the design comparison to the B&O E8, I can’t say anything about the sound differences, because I haven’t got my hands on these headphones yet. As soon as that changes, I’ll add it here of course.

Optimum hold in the ear thanks to bud design

In the test the Meizu POPs have the safest hold in the ear so far, they fit me perfectly with the middle ear pads. Even jerky head movements don’t change their position. Compared to headphones in the AirPod design, I see the advantage here in that the weight sits compactly directly in the ear and thus holds better. 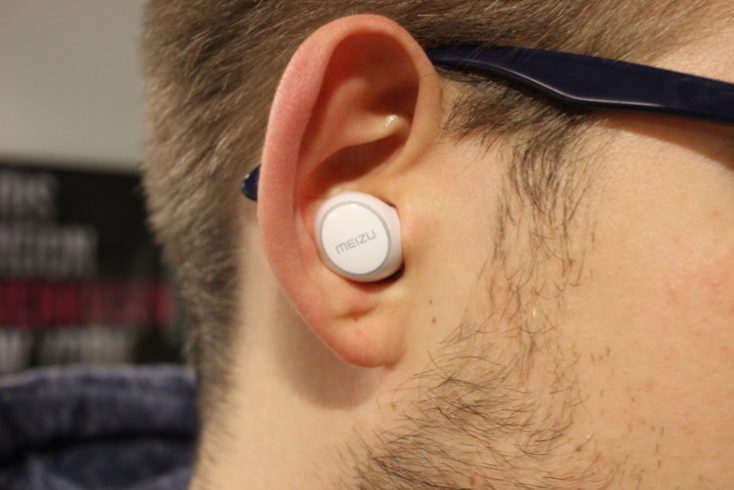 A positive surprise are the included earhooks, which are the exception with true wireless In-Ears. In my case, the earhooks hold perfectly even without the rubber covers. But I am sure that they are a real blessing for one or the other. The earhooks don’t even have to be removed for charging, as there are recesses for the charging contacts – very nice! 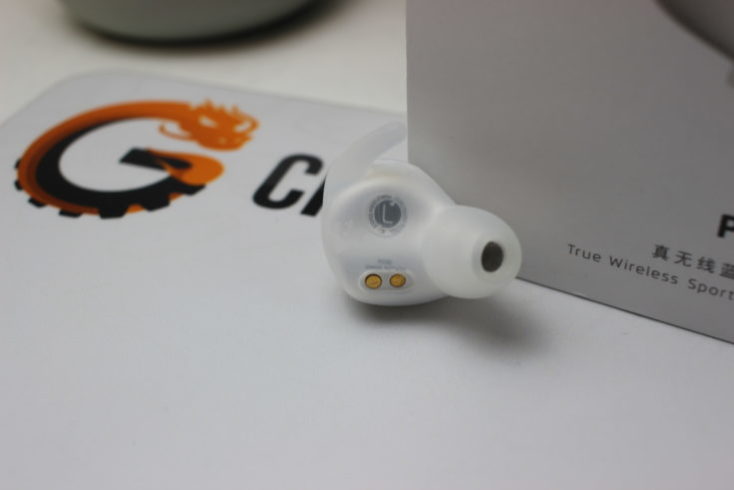 As with the Xiaomi AirDots, a large touchpad is located on the back of each unit, allowing the headphones to execute a few commands.

In the test, the touch panels react reliably to touches. It’s nice that the volume can also be adjusted via the handset.

The headset is equipped with Bluetooth 4.2 and provides a solid range in the test. Outside, the Bluetooth connection remains stable at about 10 meters. In closed rooms about 5-6 meters are a realistic value. Unfortunately the Meizu POP supports neither aptX nor the AAC protocol.

If you take the handsets out of the charger, they connect quickly and automatically to the last paired device. If no known device can be found, they automatically switch to pairing mode. Unfortunately, a minimum latency of well under one second can be detected during video streaming. But this didn’t bother me personally, because it’s not too big.

Although the microphones are placed close to the ear, my conversation partners were able to understand me well in the test. However, it has often been said that my voice sounds tinny, but this has no effect on intelligibility. Another positive aspect is that the Meizu POPs function as a stereo headset and not just as a handset during telephone calls.

Each Meizu POP handset contains an 85 mAh rechargeable battery, plus 700 mAh in the charging box. In the test, the headphone battery lasted for about 2.5 – 3 hours at a volume of 50% – 70%. In comparison, this is almost a bit too little, the Anker Soundcore Liberty Air manages up to 5 hours. With the charging box, the Meizu POPs can be recharged four times before a power outlet is needed. A complete charging process in the charging box takes about 1.5 hours.

I like the fact that the charger box is equipped with a current USB-C port, but it is located on the underside – not optimal.

Overall, I like the Meizu POPs very much, but they are definitely not the right choice for everyone. If your taste in music goes in a direction where deep and full basses play a subordinate role, they are the right choice. You value rich basses? Then you’d rather go for the Anker Soundcore Liberty Air.

The operation of the headphones also includes the possibility to make the headphones louder and quieter. This is unfortunately not the rule so far, some manufacturers can take the Meizu Pop as a model. In the area of design and workmanship there is nothing to complain about, but I would have been happy about a black version.