0 Kommentare January 2, 2019by Tim
Hey, guys! Just a heads up: The linked offer is already a bit older and the price of the gadget might have changed or it might not be available anymore.

The 2000 pa suction power of the RoboRock S50 as maximum value is unequalled, this new model was announced with 2200 pa, but now we are talking about 1500 pa. The MinSu NV robot vacuum cleaner is now available at GearBest. Great opportunity to introduce the robot to you. Can Minsu keep up with the established manufacturers? 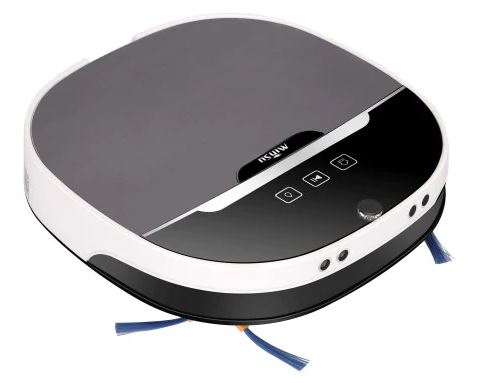 The direct, tabular comparison with the current top model S50 clearly shows that both models differ somewhat more than just in suction power. From my point of view the suction power is a very important factor, but the navigation of a suction robot is much more important. The Minsu NV-01 with 1500 pa suction power has one of the higher values of the already tested robots, but compared to the laser room measurement of the RoboRock S50 or 360 S6 the NV-01 comes “only” with a gyro sensor.

While in laser room measurement the whole room with all furniture is completely scanned and measured, the gyro sensor works differently. A gyro sensor remembers the rotations of the robot (usually from the charging station) and registers obstacles in front of it. So the Minsu NV-01 doesn’t know exactly where it is in the room, but which way it has travelled.

In addition, there is an integrated SLAM algorithm (SLAM stands for Simultaneous Localization and Mapping) which, in combination with the infrared sensor, improves autonomous working.

The gyro sensor provides an exciting option that is indispensable in the world of suction robots, but one that is indispensable: Mapping, i.e. the creation of a virtual map, is also possible with the gyro sensor, since the obstacles are also detected. We know this from the IMASS A3S or the new Xiaowa E35. The map can then be reconstructed live in the app. We know, for example, when the robot makes its rounds without our existence, where it is at the moment in the apartment.

Due to the built-in gyro sensor, the robot should have no problems finding the charging station on its own when the battery level drops. If the robot drives in automatic mode, it uses the Zigzag mode (also called Z-Shaped). This means that it moves in straight lines from wall to wall (or obstacle to obstacle) and normally leaves no area out. The manufacturer even speaks of an area coverage of 99%. Well, I’d rather keep the ball flat.

Those who call Amazon’s Alexa their own can be happy about the control they brought with them. The suction robot can be started via voice control (Alexa, start suction robot), stopped or the desired working times scheduled. This is certainly practical for users, but not a particularly new or exciting feature these days.

Even though suction robots are designed to work when we are not at home, we often let them do a few laps when we are in the same room. We’re not wild about dusting ourselves. ? That’s why it’s very important that we’re not disturbed by the operating noise. A noise level of 65 dB is reasonable (people talk at an average noise level of 60 dB).

With an operating volume of 65 dB, the suction robot is one of the louder models. In terms of height, there are different figures, for example 12.0 cm (which would be much too high for a robot) and 8.5 cm. On closer inspection, I assume the latter value for both. So the robot is just flat enough to get under many pieces of furniture.

I see in this model rather an improved Haier XShuai than a real competition to the top models. But you can still expect good vacuum results, after all, navigation, suction power and mode of operation are looking okay. And for the price of ~170$ you get a lot for the money.

The wipe function can’t be evaluated well at a distance, but it looks as if the Minsu NV-01, like many models, only pulls a wipe mop behind it, on which water drips from the water tank. Still a big shortcoming with suction robots. But if you would like to have a wipe function, take a closer look at the RoboRock S50 or the soon available ILIFE X800.

What do you think: Do the technical data make you want more? How important is suction power for suction robots to you?