1 Kommentare July 25, 2019by Tim
Hey, guys! Just a heads up: The linked offer is already a bit older and the price of the gadget might have changed or it might not be available anymore.

For the workout in between, to relax after a hard day or to get your boxing career going: Indiegogo is currently running a crowdfunding campaign to finance the smart “MoveItSpeed” punching ball. We were able to test the sturdy sports trainer before its official release. 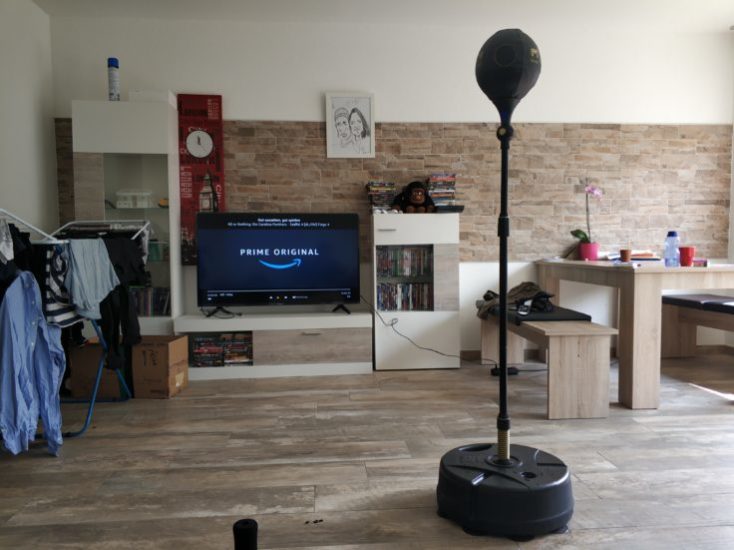 Currently, all supporters receive a thirty-day VIP access to otherwise chargeable app courses until the end of the campaign. During the test phase I noticed that an access would have been practical; without it you still have limited training modes (even if enough).

Why I test a punchingball

I have to say that I have rarely looked forward to a test as much as with this gadget. When it’s broadcast, I watch boxing every Saturday (out of college football season, though). Unfortunately, I’ve only been able to see live boxing a few times so far, but the number of visits will increase steeply in the future.

I’m a bit too cowardly (and probably too weak) to box myself, but I’ve thought about fitness boxing a few times in the past. The main thing is not to go to the dull and stuffy gym. The MoveItSpeed could actually close a gap for me, between football training and jogging I still lack a more entertaining sports activity. And when it comes to boxing, you train your whole body.

You notice: I’m not an expert in this field (only in front of the TV), but I’m really interested in the device. My crowdfunding support is almost complete, now the punchingball only has to deliver what is advertised at Indiegogo. But this is exactly the reason why it fails with many products. Follow me through a completely new experience testing gadgets! 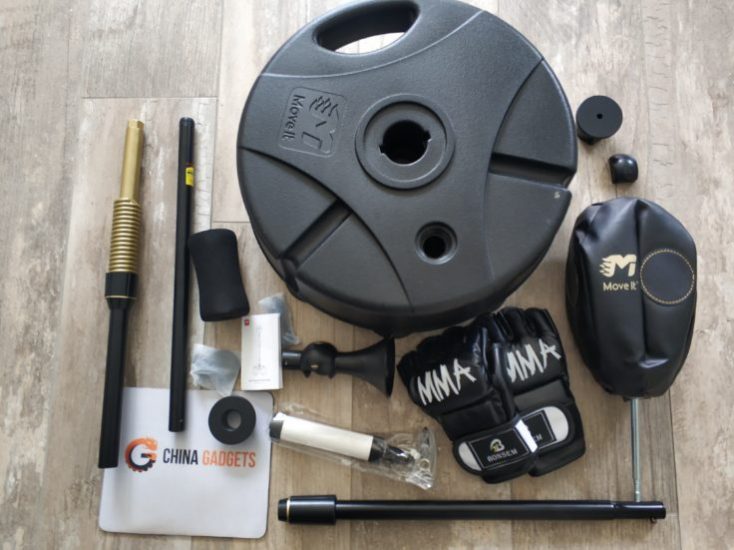 For $95, you really get a lot here. With China deliveries, you can never be so sure if all important components are included for use – often batteries etc. are missing. Therefore it is nice to have two boxing gloves, an english manual and the necessary air pump in the package.

All you have to have at home is a screwdriver. In general, everything is top workmanship and chic designed, here you can not deduct any points. Also the gloves are made of very high-quality material.

Setting up MoveItSpeed takes about 5-10 minutes, depending on how fast you know what to do. The English construction manual is not on IKEA level, but it is enough not to be completely helpless. In fact, sometimes it’s not really clear what to do.

If you have mounted the rod correctly in the middle, you only have to inflate the punching ball with the air pump. That goes also very fast.

Then you just put the punching ball on the top side and can start training. However, one part is missing – a few screws and a foam attachment are left over. Nevertheless the whole Punchingball is completely ready for use, but I always find such odd leftovers.

But still the punching ball is now standing in the living room after a bit of back and forth – and is doing pretty well. You definitely need some space, luckily a punchingball goes up and not down.

What is extremely positive compared to a real punching bag is that you don’t have to calculate the load capacity of the ceiling beforehand and can always place the MoveItSpeed in different places instead of hanging it firmly from the ceiling.

Unfortunately, the closure to the opening into which the water is poured is missing to give the stand a firm footing. That doesn’t really make a difference, but it does spill some water out of the stand when you hit it very hard. That’s annoying, but not the end of the world.

As you know from parasol stands, you have to fill them with water so that the punching ball doesn’t fall over when you hit it with force. I wasn’t smart enough to get the garden hose directly, but by using a measuring cup I now know how many litres fit into the tank. Namely 12 litres, depending on the impact hardness you should fill the container completely up to the top.

The App “Move It”

With the app “Move It” (Android, iOS) the Punchingball becomes a smart Punchingball. At first a registration is necessary, as with almost every app. Unfortunately this is only possible by mobile phone number. Alternatively you can log in with WeChat, Facebook or Xiaomi-App, but all my Facebook attempts were not successful. A little tip: There are many providers of fake mobile phone numbers on the internet that can be used for such purposes. Currently, the app is only available in English, but this can change with official sales.

The MoveIt app would like to have some more personal information, including region, weight, gender, height and many others. This also makes sense with a fitness app, especially if you want to pursue long-term goals such as weight optimization.

In the offer of the app you will find many more devices besides the punching ball. For example fitness trackers, scales and dumbbells. If you use several of the brand’s products, you can track your fitness in the app with all kinds of smart devices. The brand was largely unknown to us until now, but does not seem to be so unknown in China.

Bluetooth connection with the MoveItSpeed

You connect your smartphone to the punching ball via Bluetooth and integrate it into the app.

If the connection doesn’t work directly, you have to press the golden button for a few seconds, then it outputs the Bluetooth signal and can be connected. Sometimes it also helps to start a second attempt. This doesn’t always work the first time.

Within the app, the status of the punching ball can also be retrieved after a successful connection, such as the remaining battery power or current firmware. More and more training and game modes will be added, so it’s worth keeping the app up to date.

But now you can get your hands on the Punchingball! Of course we ask ourselves the question: Do you really need the app or can’t you just hammer it? Thanks to its built-in sensors, the Punchingball is able to collect various data, which can then be displayed in the app. The smart bag measures the following:

The “rebound” of the punching ball is awesome: The harder you hit, the faster the punching ball will fly back to the boxer. This can also be used to train your movement skills, but you also have to pay a little attention. The Punchingball can quickly catch you in the face if you overdo it.

Currently only one game mode is available, this one is entertaining, very funny, permanent but also not boring. Here you beat up a cartoon character until it is green and blue. But because you look at the punching ball while hitting – and not at the smartphone – the game factor is not really given.

But afterwards a score is displayed, including completion rate of the beats (complete hits), accuracy, number of beats and much more. These are values that can be improved bit by bit.

Coolly enough, you can specify an image for the game mode that you can invade. In an advertising video, it is suggested that you choose your boss and let off the aggression. But since I like my boss (and he could read this here), I choose myself, because in most cases you’re only mad at yourself, but like to project it onto other people:

In fact, pure facial images are better than the one I chose, but I didn’t have a digital passport photo of myself at hand. It’s enough to react.

Two strokes, one kick, dodge. Two strokes, one kick, dodge. For example, the free training modes are prepared, there are also some VIP accesses to special training units. In addition to the modes, there is also always an indication of how many calories you burn. This information should be taken with caution, of course, but the training sessions are definitely not harmful to the weight.

Clean hits are indicated by the LED lights above the button – if the punching ball is positioned correctly, slightly below eye level – as blue, wrong movements and hits as red. The difference between a kick and a punch, however, the punching ball does not recognize. So you can cheat yourself.

The scores achieved can be compared with other users worldwide, you can also “train together” online. Both fighters are boxing at the same time, it’s rather nonsense in itself, you can also compare your scores delayed. But in order to find motivation, it is certainly helpful for one or the other.

In addition, online coaches can be hired for a fee to monitor the training and help with questions. Also here the sense is once questioned, up-to-date there are only Chinese Coaches on the way – speak, one must be powerful the Mandarin.

Allegedly our version is still a prototype – but there is nothing to notice about it. Only the app is still partly in English, partly in Chinese and partly it hangs with the Bluetooth connection. The smart Punchingball is not so smart to distinguish leg hits from fist hits, you can also question the usefulness of the app – after all, you can also learn about training methods and repetitions yourself.

But: Training with the MoveItSpeed is really fun! Whether you just want to move a little in between if you’ve sat too long, want to relax after work or just do three strokes in passing: Those who like to move get a lot of functions and fun for less than $100.

I also find the price completely justified at the moment. The smart punching bag is expected to become considerably more expensive when it is released in the shops. Delivery will start in September 2019, I’m looking forward to my own model.

What is your opinion about MoveItSpeed?