0 Kommentare November 13, 2021 by Fabian
Hey, guys! Just a heads up: The linked offer is already a bit older and the price of the gadget might have changed or it might not be available anymore.

The Neabot Q11 is a vacuum robot with extraction station and front-facing LiDAR navigation. Not only does it require little attention, but it also navigates through your home with extreme precision. Can it hold its own in the strong robot vacuum market? 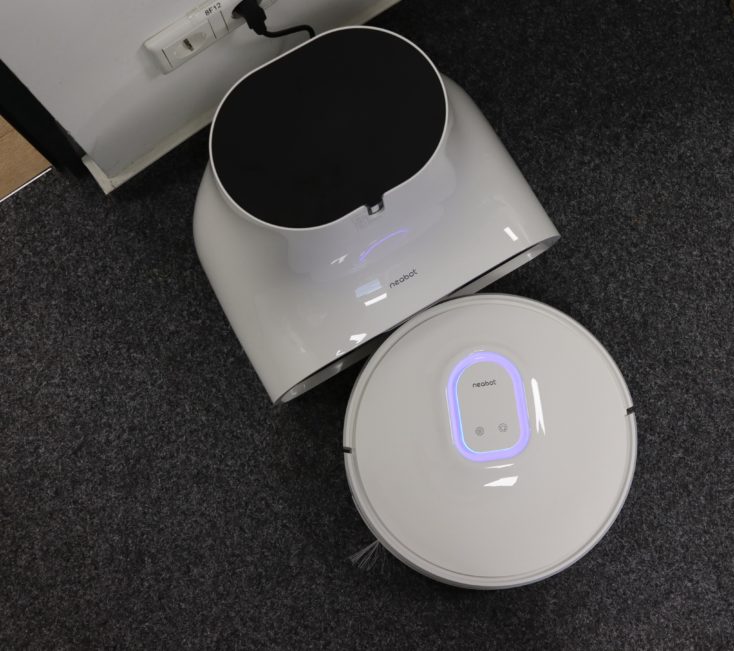 In the scope of delivery of the Neabot Q11, we find all the necessary things for operating the robot vacuum cleaner. This includes the device itself, but also the extraction station, which also serves as a charging station. 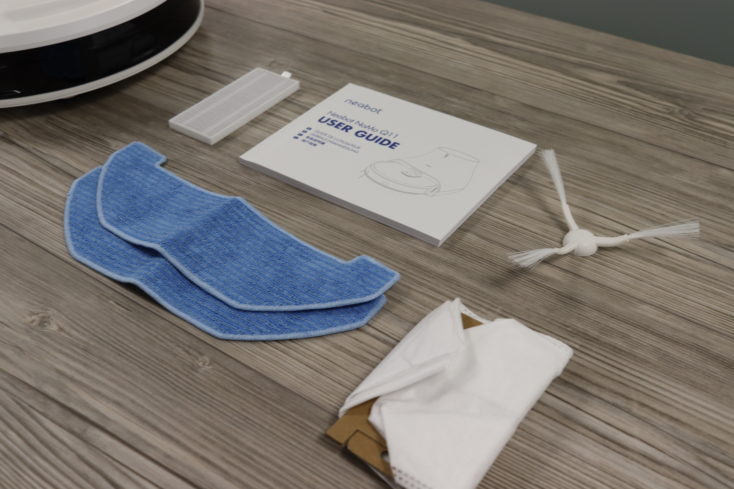 Furthermore, two side brushes, one as a replacement, the mop attachment including a reusable cloth, an additional dust bag and a replacement filter are found in the box. It’s good that a few utility items are already included here. However, I think more dust bags could be included at the start. 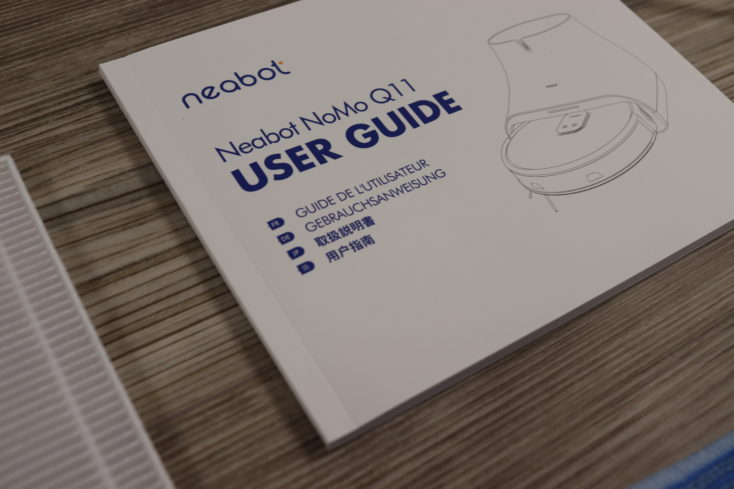 In terms of design, the robot vacuum cleaner is kept usual. It is round, predominantly white and has two controls on the top. Under the control surface is a blue LED ring, the brightness of which can be adjusted in the app. A bit more peculiar is extraction station, which is almost L-shaped. On the top is the flap for dust bag removal. However, this is not fixed with a hinge, but rather acts as a lid. This is a bit unusual when you usually open the chamber. There is not really anything to complain about in terms of workmanship in the Neabot Q11. The plastic is of high quality and the individual parts are cleanly manufactured. The controls sit on a kind of rocker, which is why you press them more on one of the sides than you actually press a button. However, this works quite well. Anyone who has dealt with vacuum robots a bit will notice that there is no tower for laser space measurement on the top. Nevertheless, navigation works exactly via this, but the technology is located at the front. We thus have a similar system to the 360 S10. I was particularly struck by how much confidence Neabot has in letting the Q11 drive through your home. After an initial drive where it doesn’t really clean yet, it scans your home and creates the floor plan of its map. Once the process is complete, the Q11 drives quite fast and stops precisely in front of furniture. The only problem is furniture that is lower than him at 8.7 cm, but at the same time only protrudes at the top. Thus, it recognizes that something is in front of it, but thinks that it has to brake later. However, there is still a contact sensor with a bumper at the front for this, which means that it can still navigate further in those places. You can see from models like the Neabot or the 360 S10 that this is probably where robot vacuum navigation is headed. It is precise, can detect smaller objects in front of it, and even reduces the height of the robot vacuum in the process. Thus, it can also vacuum under more pieces of furniture. 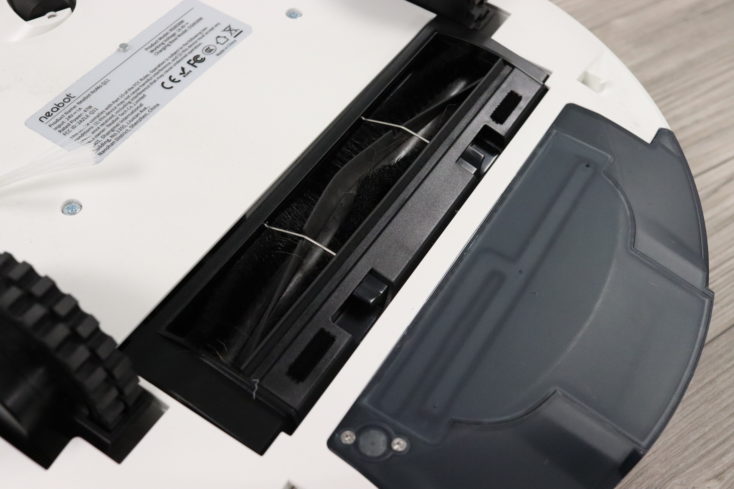 During the cleaning process, the vacuum cleaner reliably swept the apartment. However, its 4000 pa suction power does not quite come into its own, and it could only collect some dirt on the carpet in the second pass. On hard floors, however, it looks much better as usual and is cleaned reliably in the first pass. Of course, it also depends on the degree of soiling. Even the most powerful robot vacuum will probably fall to its knees right after a bunch of children with dirty shoes. You do not have to worry about falling down the stairs, either, because there are fall sensors on the underside.

Not to forget the extraction station that comes standard with the Neabot Q11. It can relieve you of the work of emptying the robot vacuum cleaner for a whole month. For this, it uses dust bags that you throw away afterwards. There is no reusable dust chamber, like Roborock’s cyclonic vacuum station.

To control and view the map, one uses the Neabot app, which is available on Android and iOS. Certainly not an exclusion criterion for most, but not quite optimal for the German market, is the non-localized app. Unfortunately, only English is available, and there is no German voice output.

First, the robot vacuum cleaner must be connected to your Wi-Fi/WLAN network via the app. This can be done via two types of connection. Once directly via the Wi-Fi or via Bluetooth. In our case, the Wi-Fi connection did not work at first, but the Bluetooth connection made it possible without further problems. Bluetooth as an alternative method in case of difficulties with the Wi-Fi connection is a good idea. This saves the user from unnecessary troubleshooting.

In the app, there are of course plenty of options to edit the created map or adjust things like the suction level. Also included are no-go zones or no-wipe zones, so that you can adapt the map to your needs. But you can also display the status of consumables or select maps of individual floors.

Almost every robot vacuum cleaner now has a wipe function. This is also the case with the Neabot Q11. However, this is more of a simple implementation, where the wiping cloth is pulled along and the necessary pressure for deep cleaning is missing. 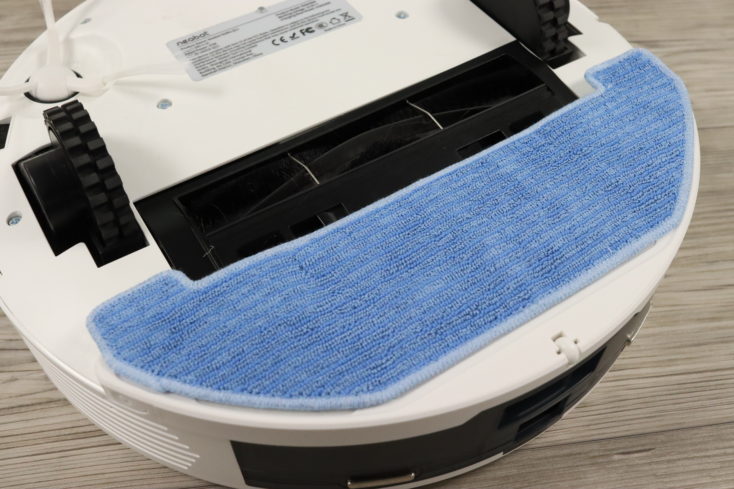 That’s not bad, but it’s more of a quick wipe than a proper cleaning. It would need real mops or the vibration technology for that. However, it doesn’t do completely without extras, as the amount of water dispensed can be controlled electronically.

The Neabot Q11 is an interesting vacuum robot that even comes with a extraction station as standard. Especially the navigation method via the forward-facing sensors is exciting and at the same time very reliable. As for the app, I would be happy to see a translation into German in the future, as it will make it more accessible. The Neabot Q11 also lacks additional smart features like carpet or object detection. In return, it does a good job at cleaning and does not need to be cleaned too often due to the extraction station. Thus, the Neabot Q11 is certainly worth a look and we will definitely keep an eye on the brand.