0 Kommentare August 5, 2019 by Maike
Hey, guys! Just a heads up: The linked offer is already a bit older and the price of the gadget might have changed or it might not be available anymore.

As some of you probably know, we’ve introduced you to Nitecore flashlights in the past. The smaller models like the Nitecore Tube, Tini, Tup and Tip are always the most popular. The latter is now available in a newer version with some changes: the Nitecore Tip 2. 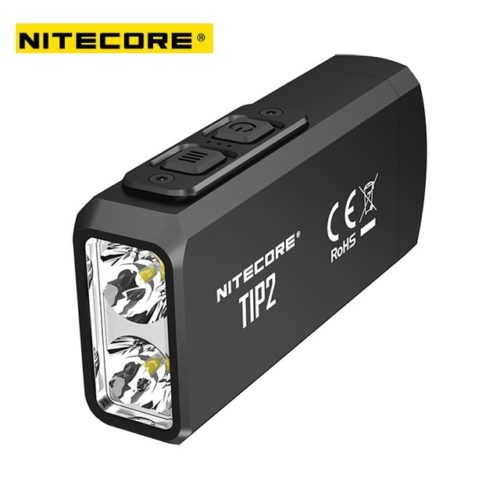 Technical data of the Nitecore Tip 2

At first glance, I don’t think it’s obvious that this is a successor of the Nitecore Tip. The two flashlights only have similarities in detail. The most striking difference is probably the processing of two CREE XP-G3 S3 LEDs in Tip 2 instead of one CREE XP-G2 S3 LED in the Tip. In addition, the Tip 2 is apparently used upright, at least in the photos it is usually seen so.

The design of the controls is the same on the outside, but that’s where it stops. Tip 2 also has a length of 62.2 mm and a weight of 38.3 grams. Internally, the similarities are also limited. Both flashlights have in common the rechargeable 500 mAh battery and the possibility to select 4 different brightness levels.

The functions of the Nitecore Tip 2

The special feature of the Nitecore Tip 2 is the Turbo Mode with 720 lumen already known from other models. The Tip with “only” 360 lumen offers much less. Here is a tabular comparison:

The ranges of the different modes of the Tip 2 range from 93 meters at the highest level (48 meters at high, 18 meters at mid) to 3 meters at 1 lumen. These are only minor deviations from the Tip. In addition to the brightness levels, you can also choose between daily and demo mode. This actually only means either a constant glow until it is manually switched off in Daily Mode, or a 30 second automatic glow in Demo Mode.

The integrated 500 mAh battery can be recharged via Micro-USB. The input is located at the end of the flashlight, behind a magnetically attached suspension.

In addition, there is a clip with which the flashlight can be easily clamped to trouser, shirt or backpack pockets.

Tip 2 is operated in the same way as the other models using two buttons: ON/OFF and MODE. DEMO and DAILY mode are set by pressing both buttons simultaneously. The different brightness levels (except turbo) are automatically set when the Mode button is pressed with the flashlight switched on. Turbo Mode can be activated directly by pressing the Mode button longer.

Another member of the Nitecore family, another small flashlight. It also has some already known features, a little more luminosity than its predecessor, but not as much as the Nitecore Tup – and little new. Except for the magnetic mounting option. As the owner of the Tube, which is sufficient for occasional camping trips and night walks, I am still a fan of the Nitecore brand and would recommend any model without reservation. It depends here simply on the own requirements to the flashlight whether a purchase is worthwhile or not.