0 Kommentare August 22, 2021by Thorben
Hey, guys! Just a heads up: The linked offer is already a bit older and the price of the gadget might have changed or it might not be available anymore.

The manufacturer NOVOO attracted attention years ago with the 20,000 mAh powerbank, and the portfolio has grown in the meantime. In addition to the standard 5-in-1 USB-C hub, this NOVOO 9-in-1 USB-C hub is also part of the portfolio, and its relevance has increased at least since the increased work in the home office. 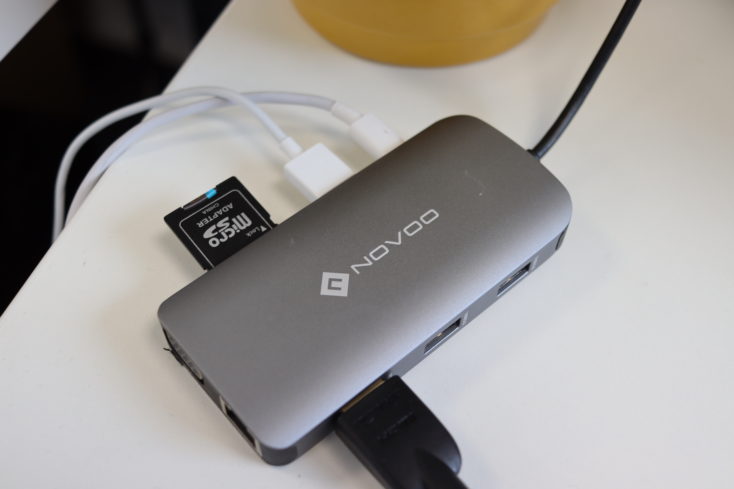 Almost completely made of aluminum

The NOVOO 9-in-1 USB-C Hub must temporarily replace my iVANKY 7-in-1 USB-C Hub, which now provides me with faithful service since the test. The fact that we are dealing with a somewhat higher-priced product is already apparent from the design. The case is almost completely made of aluminum. Unlike the iVANKY, plastic is only found on the short sides of the adapter. The USB-C cable is also located there, which is firmly attached to the hub and measures approximately 20 cm in length. With dimensions of 11 x 5.5 x 1.3 cm, it is about the same size as the iVANKY model, but looks a bit smaller. 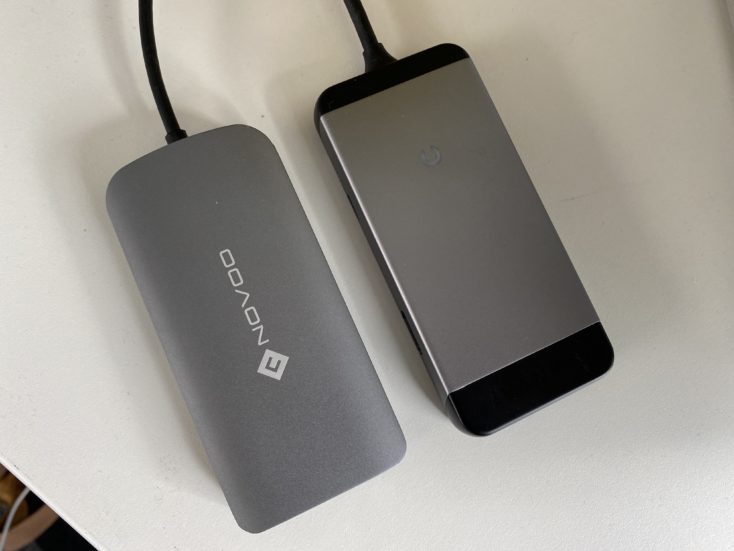 NOVOO only leaves slight points in the workmanship. Some of the plastic comes off at the edge on one side and thus sticks out slightly. The plastic is generally not perfectly integrated into the casing, but this is at most a deduction in the B grade. NOVOO can at least put this into perspective with a user manual in German. 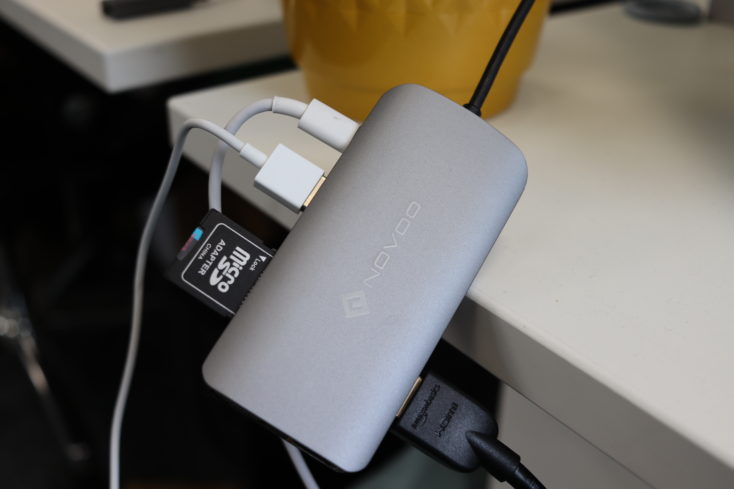 The ports are distributed sensibly on the sides of the case. On the “right” side are two USB-A ports and the HDMI slot. The Ethernet port and a VGA port for monitors are on the short side. On the left is the USB-C port for Power Delivery next to another USB-A port and the two SD slots for SD memory cards and microSD cards. This brings the total to nine promised ports, for which a USB-C port on the notebook has to be sacrificed.

USB-C hub with a total of four USB ports

The USB-C port, which the hub takes up on the computer, is reproduced in the form of the USB-C port. It supports pass-through charging, so it can still charge the notebook. The maximum power is 100W, which should be enough for most notebooks, such as a 15″ MacBook with 96W. Combined with my Aukey 65W USB-C Omnia Mix, an M1 MacBook charges completely in about 3h while also connected to the Xiaomi 34″ Curved Gaming Monitor. 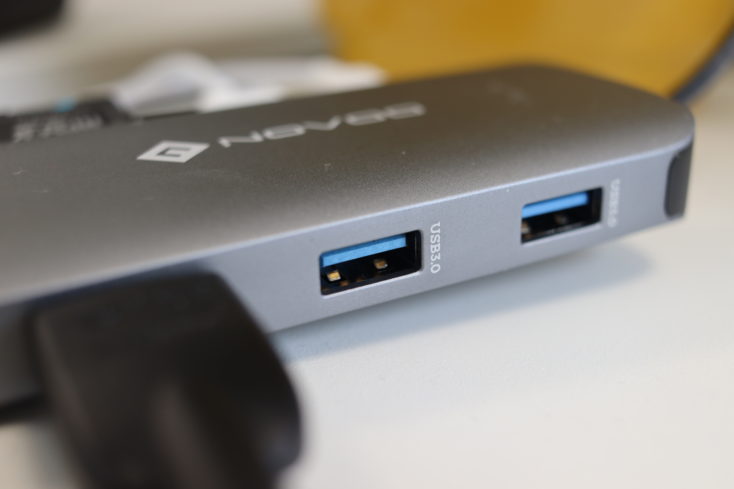 Beyond that, there are three USB-A 3.0 ports. USB 3.0 sounds good at first glance, but the standard is currently very confusing. After all, USB 3.0 is the same as USB 3.1 Gen 1 and USB 3.2 Gen 1, with all standards offering a theoretical data transfer of 5 Gbps. For a higher speed, you would have to rely on at least USB 3.2 Gen 2. We were able to transfer a 1 GB test file in 16 seconds with it, so the speed is around 60 Mb/s. Of course, this depends on the amount of files and the general file size and should only be a guideline. 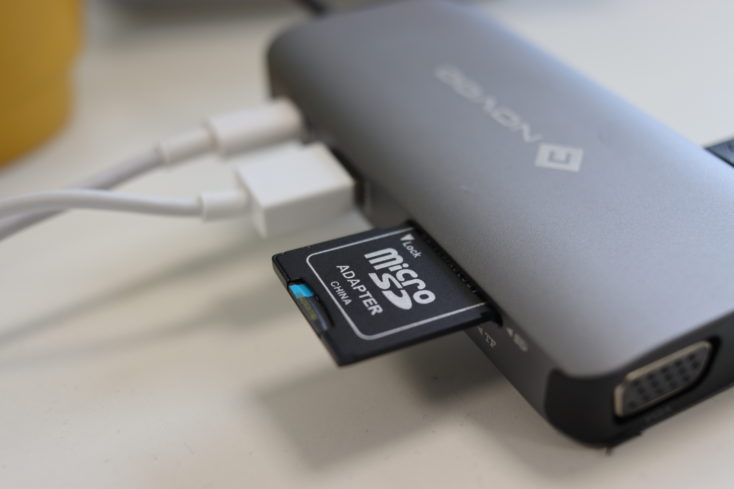 It looked a bit different with the SD slot. The file transfer of the 1 GB test file took just under a minute and 30 seconds, which translates into a speed of 11 Mb a second. However, this is also a class A1 memory card, which theoretically allows 100 Mb/s. However, you can use both memory card slots simultaneously.

The Mi Gaming Monitor. is connected to the hub via the HDMI port, but the NOVOO device only supports 4K at 30 Hz, which is relatively common for such hubs. If you absolutely need more hertz, you have to use an adapter like this one from Anker. I don’t see much of a difference for everyday work, if I’m honest. I use the Mi Gaming Monitor at 3440 x 1440p. 60 Hz is only available at 1080p resolution. The screen can be synchronized or expanded.

Alternatively, a VGA input is also on board, which is only up-to-date to a limited extent. A maximum of 60 Hz at a FullHD resolution is also possible via the port, even if the HDMI port is in use for a second (or third) monitor. This might not be a bad option if you still have an older monitor at home and want to use it as a third monitor for the home office. Otherwise, the uses of VGA are rather rare by now. 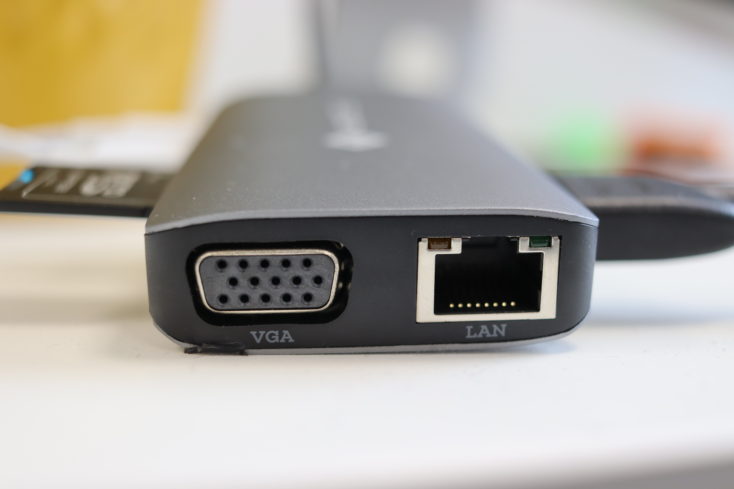 The same is probably also true for the Ethernet port, which is located right next to the VGA port. It allows a maximum data transfer of 1000 Mbps and is especially interesting for stationary use. In my case, this also ensures a stable and faster Internet connection than via WiFi, which is especially important when uploading data to the NAS.

The NOVOO 9-in-1 USB-C Hub was ready to use right out of the box and didn’t require a driver or anything on my MacBook. It is protected against overcurrent, short circuit and overheating. Unfortunately, we cannot test the extent to which this works without a real-life situation. However, temperature is a good keyword: The NOVOO 9-in-1 Hub gets warm! Noticeably warmer than my iVANKY Hub. I cannot judge to what extent this has an effect, because the performance was not affected, but you should keep that in mind.

The NOVOO 9-in-1 USB-C Hub is also just one of many hubs, but it has an above-average number of nine ports. At just under $40, it is relatively inexpensive for this performance, but everyone has to know for themselves whether they really need all the ports. For many users, even in the home office, the 5-in-1 hub from NOVOO, which is also equipped with an HDMI port, is certainly sufficient. For what it is supposed to be, the 9-in-1 hub is a good address and could also be used by me in the office on a daily basis.