0 Kommentare February 4, 2022by Thorben
Hey, guys! Just a heads up: The linked offer is already a bit older and the price of the gadget might have changed or it might not be available anymore.

With the 20,000 mAh powerbank, NOVOO has shown us that a lot of capacity can also be cheap. But if even that much capacity is not enough, you might like the NOVOO Power Station. Thanks to 80,000 mAh capacity, a power outlet and enough ports, you could even set up a portable home office with it. Why a Power Station is called “Power Station” and not Powerbank should quickly become clear. Due to dimensions of 23 x 20.2 x 14.6 cm and a weight of 3.45 kg, you won’t have this gadget in your backpack. Nevertheless, it is of course basically portable; NOVOO integrates a handle on the top. It is intended for use when camping or perhaps in the garden, where there is no electricity. The manufacturer still attaches importance to its own design, and the orange accents cannot be missed. In addition to the NOVOO Power Station, the scope of delivery includes a case with operating instructions as well as a DC power cable and an additional car charger cable. The NOVOO Power Station is completely encased in plastic. This doesn’t make the highest quality impression, but of course keeps the weight down. The manufacturer also thinks about ventilation slots on the left side of the device. It is only unclear to me what the orange cutouts on the top left and right are for. Nice extra: There are four rubber feet on the bottom so that the “power plant”, as it says in the manual, does not scratch the floor.

An LC display is integrated on the front, which provides information about the remaining load capacity. It also shows which ports are currently active. All ports on the Power Station can be enabled/disabled individually; there is a switch above the ports for each orange area. Whether the port or ports are then active can be read on the screen. After 30 seconds, this screen goes into sleep mode. The CE mark, FCC and RoHS certification can be found on the back. NOVOO has earned the “Power” in its name here with a capacity of 80,000 mAh. That is four of the 20,000 mAh power banks mentioned at the beginning. To be more precise, it is 296 Wh. Manufacturers often state the capacity in mAh at a voltage of 3.7 volts, which no longer applies when charging a device with at least 5W. If we assume a voltage of 5V, for example, we get a capacity of 59,200 mAh, one powerbank less. But that’s not even the end of the line, the Bluetti AC200 even offers 2000 Wh capacity.

A variety of connection options are offered here. First and foremost, there is the AC socket with a maximum rated power of 300W. In addition, there is a car socket with 12V/10A and two DC outputs with 12V. In addition, there are four USB ports. One USB-A port with up to 18W power as well as two USB-A outputs with 12W power, the USB-C port even offers a maximum output power of 45W and alternatively even serves as an input with 45W power as well. The maximum output power is 450W. 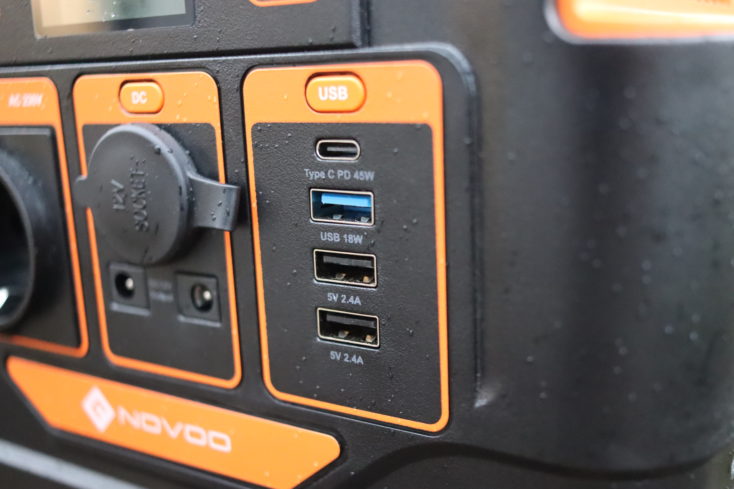 It is interesting that the NOVOO Power Station also supports passthrough. This means that you can charge and discharge this bundle of energy at the same time, i.e. charge other devices. If you want to take it with you on a camping trip, for example, you can charge it completely and still charge your smartphone, powerbank and/or flashlight – practical. If you want to charge the Power Station completely, it takes 7.5 hours with the included charger. Theoretically, it also works with a 100W solar panel, which has to be purchased separately.

Even with a flashlight

There is also a flashlight on the side, but unfortunately no lumen information is given. To turn it on, you have to press and hold the flashlight button for two seconds. The light beam is relatively wide and is enough to halfway illuminate our YouTube studio. It cannot replace a really good flashlight, but it is better than the one from a smartphone. There is also a blinking and an SOS mode, in which it shines three times briefly, three times long and three times briefly again in a loop.

How well does the Power Station charge?

Novoo promises to be able to charge most smartphones over 15 times with the Power Station, for example, and it is probably about 12 charges for most Xiaomi mid-range smartphones. Alternatively, you can also charge a current MacBook Pro 13″ four times, and an SLR camera even 30 times. It is also interesting that the capacity and power can also supply a mini-fridge with 60W for five hours, or a TV for over four hours. 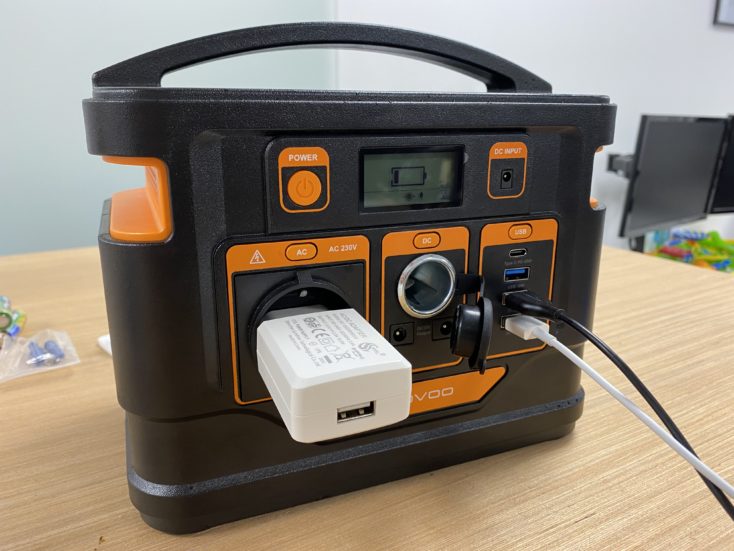 Mid-winter is unfortunately not the best camping time, so we can’t test the NOVOO Power Station in an extreme situation. Therefore, I simply powered my workstation with the Power Station and connected a MacBook Pro 13″ and the Xiaomi Mi 34″ Curved Gaming Monitor to it. The charge level was only about 80% and I ran this setup with the additional charging of a cell phone for four hours. While I was charging the smartphone, the Power Station’s fan turned on and reached a volume of about 50 dB. 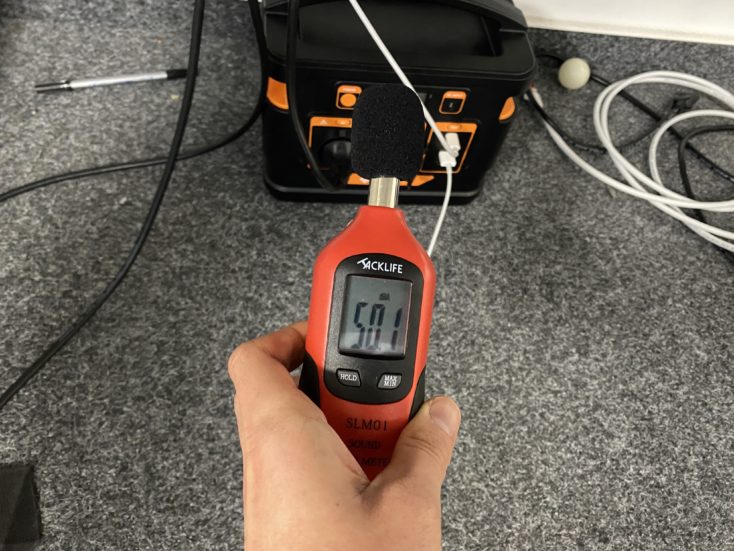 There was a short flickering of the monitor in between, but it disappeared after a short time. Reconnecting the USB-C plug once already helped.

The NOVOO Power Station is rather a device for occasional use, which is why the price NOVOO asks for seems a bit high. There are cheaper models even on Amazon, but also more expensive ones, which is why NOVOO is in the middle of the price range. If you just want to charge a few smartphones for the festival weekend, you can get away with a few 20,000 mAh powerbanks for less. However, if you just need the power outlet and you regularly go on camping trips, the car plug and the portable design come into their own.

Do you use a power station, for example on camping vacations? Or have you found better solutions? Let us know in the comments!