Some of you may have already helped fund the toothbrush during the crowdfunding. The Oclean X Pro is an electric toothbrush with touchscreen, app integration and blind zone detection. As the official Pro version of the Oclean X, expectations are high. 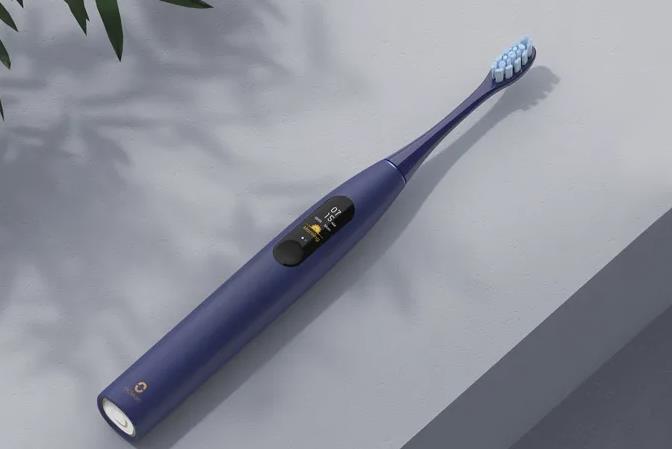 If you take a look at the technical data in the table above, it will be difficult to tell the difference between Oclean X Pro and its predecessor. Only the battery life of 30 days is a bit longer than with the Oclean X, the same is true for the short charging time of 2 h. Of course the design has been changed a bit, the color “Navy-Blue” looks quite modern and appealing. The toothbrush rotates the head at 42,000 revolutions per minute. Maybe these are the only changes.

The 0.96 inch OLED touch display, 32 cleaning and maintenance levels, IPX7 certification (dust and water repellent) and the same app as the X: If you are interested in the Pro toothbrush, the best thing to do is to see whether you like the Oclean X in the review and think about the innovations known so far.

In the software package and the supposedly most exciting function of the toothbrush is the “blind zone detection” This means that the toothbrush shows its owner after cleaning in percent how much of the teeth have not been cleaned. The value is also shown directly on the display. Let’s hope that the dark display is a little brighter than its older brother. A CE-mark is also part of the game, in terms of workmanship you can rely on the usual Xiaomi quality.

The financing target of the crowdfunding at Indiegogo was reached within a short time, but you can still co-finance here if you are interested in the toothbrush. So you may save a few dollars before the brush is more expensive available in the shops (probably at GearBest and AliExpress). The improved battery performance and the design are definitely points that make the Oclean X Pro interesting, but the innovations to the predecessor model are more than manageable. You could have expected a bit more.

Those who support the Indiegogo campaign will receive their toothbrush in January 2020 when it is shipped. For almost $50, the toothbrush with its smart functions is quite attractive, but according to the current state of knowledge, it should be enough to take the previous model. I have been using the predecessor myself for several months now and have been very satisfied so far. Technically I don’t see any really serious differences in the new model, but I like the Pro version a bit better.