1 Kommentare November 6, 2018by Alex
Hey, guys! Just a heads up: The linked offer is already a bit older and the price of the gadget might have changed or it might not be available anymore.

The publication of the (very good) OnePlus 6 was just over five months ago and already there is the successor: the OnePlus 6T. The biggest changes are the fingerprint sensor in the display, the greatly reduced notch in teardrop design, the enlarged battery and the elimination of the headphone jack. What do you think of the OnePlus 6T?

The biggest innovations of the OnePlus 6T: Design & Display

Similar to the 5 to the 5T, the back side only undergoes a small change in the shape of the fingerprint sensor. The fingerprint sensor moved from the front to the back only last year, only to take a seat at the front again. This time, however, it won’t be underneath but in the display. We already know the technology from the Vivo Nex Ultimate and the Xiaomi Mi 8 Explorer Edition, for which she worked surprisingly fast and well. According to OnePlus, her in-display fingerprint sensor is the fastest in the world, so you can unlock your 6T in 0.34 seconds. Otherwise, the back of the 6T is exactly the same as its predecessor with a glass back and a vertically arranged dual camera in the middle.

The strongly reduced Notch, which has a teardrop design, is pleasing. This smallest notch shape to date is already known from the R17 of the sister company Oppo, which serves as a template for the OnePlus 6T. The screen is therefore somewhat larger than the OnePlus 6 and is stretched to 6.4 inches, but thanks to the resolution of 2340 x 1080P (19.5:9) it maintains a pixel density of 403 PPI. Due to the larger screen and the smaller notch, the 6T with 86% has an even better screen-to-body ratio than the OP6. The FullHD+ AMOLED display is protected by the new Gorilla Glass 6.

12% larger battery, but no headphone connection

As in the past, the internal hardware of the OnePlus 6T has not changed much compared to the 6er. The processor is again the strong Snapdragon 845 from Qualcomm and you can choose between 6/128GB, 8/128GB and 8/256GB memory. So there is no 64GB version this time.

The camera is the same dual cam with 16 megapixels (f/1.7) for the main camera and 20 MP (f/1.7) for the secondary camera. Unfortunately, there is no zoom, low light or ultra wide angle camera this time either. But the software offers a new Nightscape mode for better low-light shots and a Studio Lighting mode for portraits. 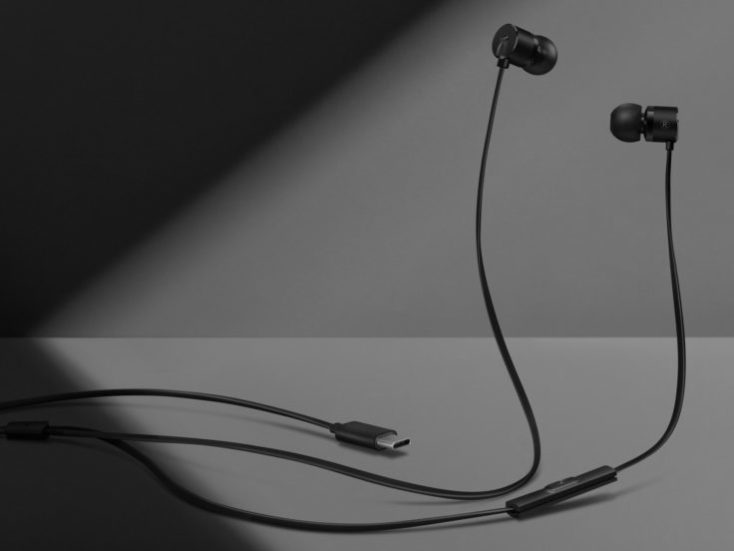 The biggest negative change is the elimination of the headphone jack. In the past, OnePlus has always been very proud of the fact that the headphone connection is still available and only in March a survey was published on Twitter (with a clear result). But now they say goodbye to it and release with the OnePlus 6T a new version of the Bullets Type-C In-Ears with USB-C connector (above in the picture) for $19.95. Here OnePlus might lose a few buyers to the Pocophone, which still brings the connector. After all, an adapter is part of the scope of delivery. 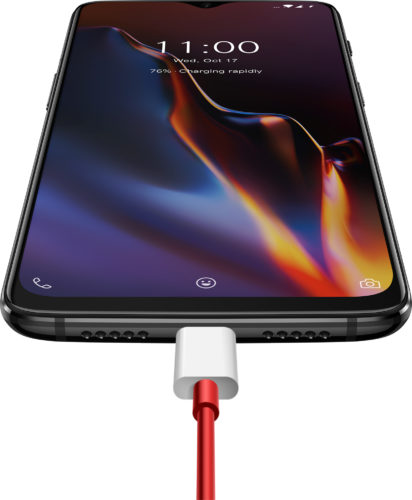 According to co-founder Carl Pei, the space gained is used for the 12% larger battery. With the slightly larger display, this increase to 3,700 mAh in a 23% longer battery life is said to be evident. For charging, one can then again rely on the OnePlus Fast Charge technology (formerly Dash Charge ), which brought the OnePlus 6 from 0% to 60% in just 30 minutes. The operating system is the latest Android version “9.0 Pie” with the Oxygen OS interface.

The OnePlus will also appear this time first in the two designs Mirror Black and the matt Midnight Black. Nothing has been said yet about possible white or red special editions. One difference are the memory combinations, because the cheapest version starts this time with 128 GB mass storage. The different configurations and prices are:

What do you think of the smaller Notch and the fingerprint sensor in the display? And what about the loss of the headphone connection?