Oppo works on own Smartwatch in Apple Watch design

1 Kommentare February 7, 2020by Thorben
Hey, guys! Just a heads up: The linked offer is already a bit older and the price of the gadget might have changed or it might not be available anymore.

Oppo is so far better known for its smartphones, such as the Oppo Reno 10X Zoom. In this country, too, they have already been able to build up a small fan base with Realme as a subsidiary. The manufacturer now wants to expand its portfolio and is working on its own Oppo Smartwatch. Will this be presented in February?

The step from Smartphone to Smartwatch is theoretically not that far, but by far not all manufacturers can show a good wearable product. The fact that Oppo is working on a Smartwatch has been known since Oppo Innovation Day, where the Oppo Find X2 was teased. 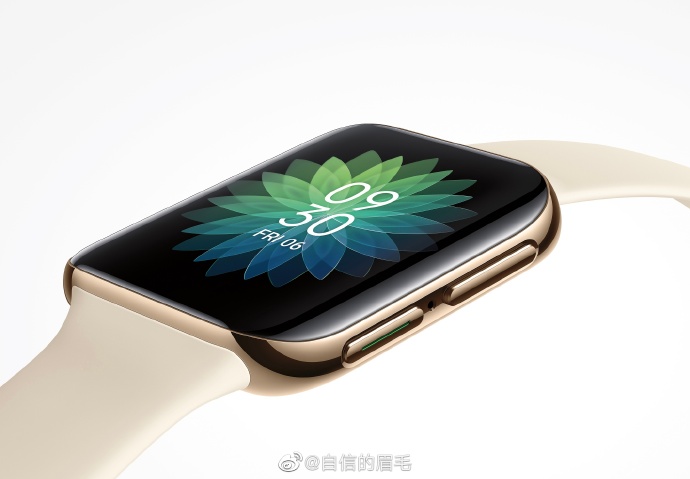 Now there is a first picture of the Smartwatch, which looks very similar to the Apple Watch. Oppo also uses a square design, following in the footsteps of the Amazfit GTS, for example. Another striking feature is that the display is rounded, at least on the left and right sides. Especially in comparison to the Xiaomi Mi Watch, which is a bit clunky, this makes it look very modern.

A striking difference to the Apple Watch is the control element. Of course, the Oppo Smartwatch is also operated via the touchscreen, but there is no crown on the side, but two function keys instead. Between them there is a small recess, which probably functions as a microphone. The connection to the bracelet is again very Apple-like, which solves Xiaomi or Amazfit in a slightly different way.

Unfortunately, apart from the picture, not much is known about the Oppo Watch. It is said to have, like the Apple Watch, an ECG feature that can detect irregularities in heart rhythm, for example. Furthermore, it will be exciting to see which software the smart watch will be delivered with. WearOS or an own operating system? We are hoping for the latter.

Oppo still owes us some information, but due to the design it seems to be a premium product. We rate the Smartwatch similar to the Huawei Watch GT2. A microphone allows calls to be made via the smartphone’s Bluetooth connection, and the two function keys lend themselves well to an internal music player. However, these are only speculations, we naturally hope for a global release. There is a rumour that the watch will be presented at the Mobile World Congress 2020 in Barcelona, which we will report live again this year. What do you expect from the Oppo Smartwatch?