0 Kommentare February 6, 2020by Jens
Hey, guys! Just a heads up: The linked offer is already a bit older and the price of the gadget might have changed or it might not be available anymore.

As someone who likes to play retro games as well as newer games in 8/16-bit graphics, such consoles are always an affair of the heart for me. Even more than other gadgets, I try them out because I personally just really like them. 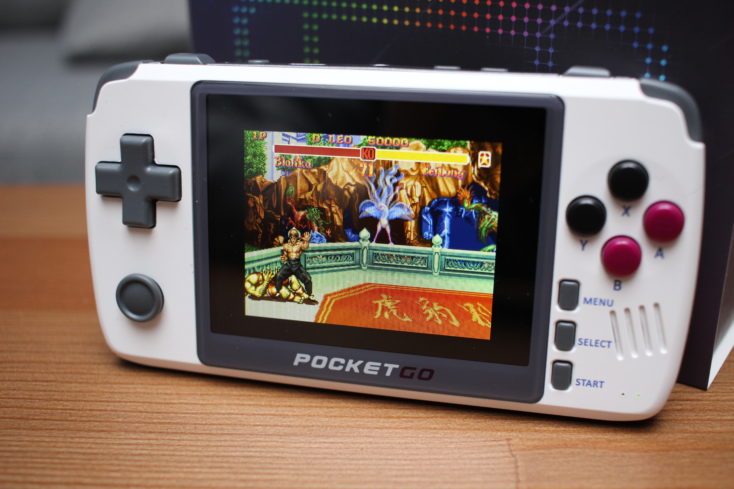 There are actually only two points in which such a console must be convincing: The usability of the hardware (this refers to both haptics and optics) and the playability of the software (from installation to frame rate). Of course, there are many details and subitems to both points, which I would like to go through in the following.

The Design – Rightly a “pocket” console

My first reaction after unpacking (the first version) was: “Somehow I imagined it bigger.” The Pocket Go is actually quite small, which affects both the operation and the display. Somehow it feels too tiny in my hands; you can reach all the keys, but the grip never really feels “natural”.

It’s a bit more suitable for children’s hands. So if you can get your kids excited about older games (instead of a Nintendo DS, for example), you’d at least have a device in the right size.

This makes the new version much better. Not only does it lie better in the hand, the larger display also looks worlds better. The overall workmanship is good to okay. The plastic casing feels quite valuable and the gaps are not too big. Nevertheless, the PocketGo V2 still fits so straight in your pocket.

Both versions are otherwise visually similar and are based on the Super Nintendo controller’s design. The buttons rather resemble the colors of the North American version of the console. In Europe, the SNES controller had four different coloured buttons in red, blue, green and yellow. These keys are also included in the small Pocket Go, so if you like, you can also redesign the handheld. However, this requires a few steps, as the console has to be opened and the complete circuit board removed.

Processing of the keys

Apart from the control pad, all the keys are a bit wobbly, but not in such a way that that would be disturbing. On the right keys (A, B, X, Y) I don’t like the pressure point very much; the keys can be pressed in a little too far afterwards, which makes especially fast inputs (“spam” of a key) a little difficult. All other keys I like altogether well.

Again, the control pad is the best working key. The A/B/X/Y keys don’t wobble as much here as on the small model, but as before they have a not quite good pressure point. You get used to it, but for my taste you have to press them a bit too tight/deep, which especially at the beginning often leads to the fact that the input is not recognized.

I have no complaints about the shoulder buttons. Unlike the predecessor, there are now a total of four buttons. All of them are easy to reach, especially because the inner keys are a bit higher. The resistance is also pleasant.

A complete flop is unfortunately the analogue stick. It is very short, which makes precise movements more difficult. Do you know the difference between the stick of the joy-cons and the pro controller on the Switch? Then you know what I mean, only that the stick here is smaller than the one of the joy-cons.

But even more annoying is that the stick is extremely heavy. You need way too much force to move it, which also causes it to slip regularly if you don’t hold it with much pressure. In addition, the stick is too deep and cannot be reached comfortably with the thumb.

All in all, even in 3D games, I always preferred the control pad to the analogue stick, which you can only use in exceptional cases.

Two buttons on the top panel allow you to adjust the volume. Unfortunately even the lowest level is so loud that you can’t play in a quiet room without everyone noticing. Fortunately, there is also a headphone jack so that you don’t have to miss the sound and the wonderfully nostalgic 8-bit music even in public.

In terms of hardware, New PocketGo has also made some progress compared to its predecessor. While the smaller model still had an Allwinner F1C100S CPU and only 32 MB RAM, the New PocketGo now has a JZ4770 dual core with 1 GHz and an upgrade to 512 MB RAM. Both is good for the console, and even 3D games now run much more smoothly than before.

In addition, there is now also an internal memory of 32 GB next to the micro SD slot, which is still missing in the first version. And there are two SD slots here.

Basically there is not much to complain about on the display of the PocketGo: The colors are vivid, the resolution of 320×240 is absolutely sufficient for most retro games in pixel graphics. Unfortunately, the display is a bit too small at 2.4 inches. That might be enough for some people, and with the size of the console, there’s probably not much more to it, but it should be a bit more for my taste as well. It’s nice that this problem has been tackled with the newer version.

Instead of the 2.4-inch screen on the previous model, the New PocketGo has a 3.5-inch display. The resolution remains 320 x 240p, but since the selection of games hasn’t changed much, this is sufficient here as well. Beautiful colors and a sufficiently high brightness provide for an overall very good display.

Both devices run different versions of OpenDingux with the GMenu2 interface. On the New PocketGo the whole thing looks a bit more tidy and pretty, but the layout is the same on both devices. Besides the actual games, there are a lot of extra features, settings, calendars, calculators… a lot of stuff you don’t need most of and not everything of which always works. 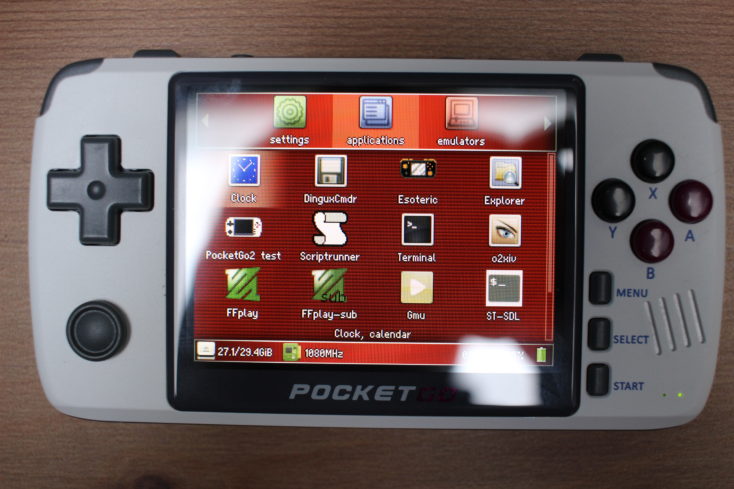 It is also possible to install alternative firmware. I did that too – but a bit out of necessity, because I formatted the SD card with the original firmware. Under Rogue CFW you can install additional emulators and also games via a second SD card. This is a bit awkward at first sight, but it is relatively easy once you have done it.

Firmware and emulators are on the SD card, but there they are in a second (Linux) partition. This partition is not recognized correctly by Windows, so you will be asked to format the card. Do not do this if you want to continue using the console, otherwise you will have to rebuild it completely.

How are the games running on the Pocket Go?

As mentioned above, there are many emulators as well as several games pre-installed. The quality of the games is quite different, not all games run equally well or run at all, and the display also varies depending on the console and the game. There are emulators for the old Nintendo consoles NES and SNES as well as GB and GBA, and other retro consoles like the Sega Megadrive or Atari 2600. There are also some arcade games and PC ports. 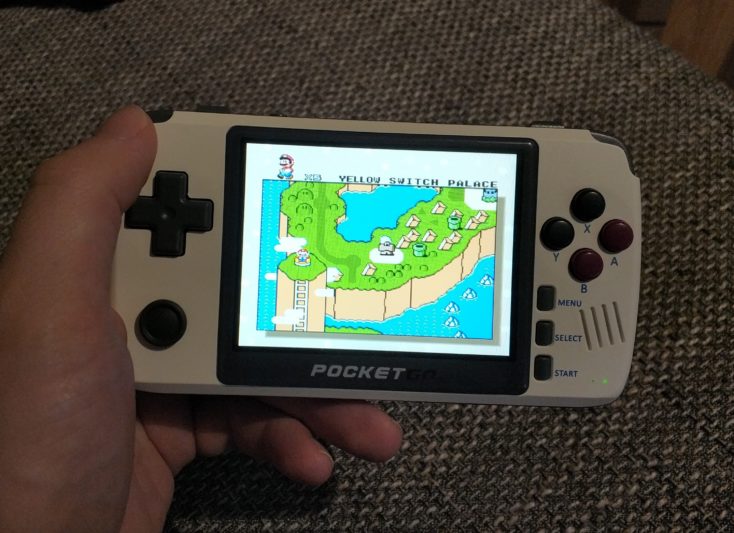 As mentioned, not all games are also playable. The reasons are different: Sometimes the game indicates a copy protection or a copyright infringement, sometimes the controls are not properly ported, sometimes games do not start at all or crash after starting. I couldn’t test all games extensively, but in my estimation only a few titles are affected.

Especially PC or Playstation titles are often not playable for various reasons. Tomb Raider 1 for example starts and even played the intro sequence after the main menu, but after that the screen remained black. Other Playstation titles, such as Spyro the Dragon, are playable without major restrictions, even the frame rate remains within a pleasant range. 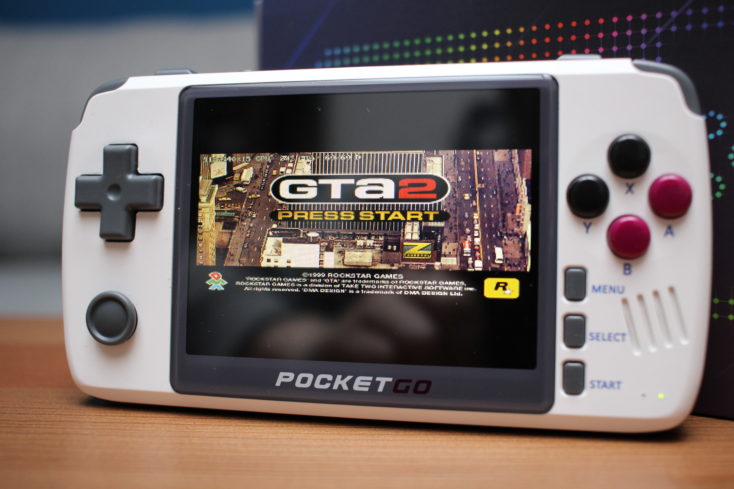 But among the SNES and GB games I found almost none that were not playable. For example, some of the Mario, Donkey Kong, and Zelda titles are preloaded with ROMs. But also classics like Street Fighter or Metal Slug. 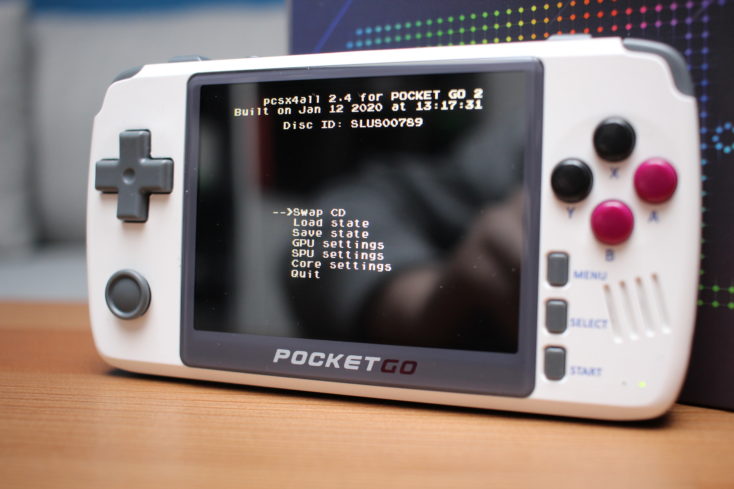 I already liked the PocketGo and it is basically sufficient for most old 8-bit games. Due to the smaller case and display as well as the hardware, which is weak in more demanding games, it doesn’t feel quite round yet. I would recommend it for children at most, if they show interest in the old classics.

The New PocketGo is an absolutely sensible and successful upgrade. The handling is better and games are simply more fun due to the larger display and the stronger hardware. Again, not all games will run, especially as soon as it’s time for the PS1. If you simply want a finished product with pre-installed games, you won’t necessarily be happy either: There are more than just a few titles to choose from, but if you want to play something different, you have to deal with the software and accept that not every title will run at first go (or at all).

But if you’re willing to do so, and especially if you’re up for the titles of the pre-3D era, you’ll get a really good retro console in my opinion with PocketGo V2. A comparable model is the also very good RG350, which we also tested recently. You’re welcome to take a look at the field report here too.